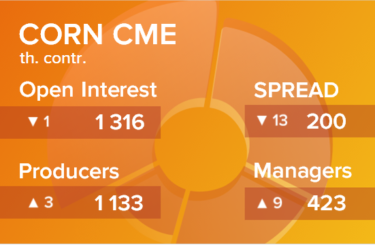 The USDA report was published. The forecast for gross wheat harvest in the world is reduced by 0.53%, in the USA by 2.85%, which is significant. The market continued to grow after the release of data, which persuade us on the reality of reaching the level of 545.0 cents per bushel on the Chicago stock exchange.

Gross harvest of corn reduced by 2.13%. This is a bullish fundamental signal, but the market was expecting an even greater drop in crop volumes, therefore we saw a pullback on Friday.

Forage crop prices may suffer due to lower demand for expensive meats amid falling incomes. So far, the situation with prices for corn is not as optimistic as for wheat.

The pandemic continues to spread havoc in the United States. US tries to ignore the coronavirus at the federal level and let local authorities to go their own way. Not the dollar, nor the debt, nor the stock market can withstand a second stop in the economy.

Economic problems will increase in both the member countries and non-member countries of the OPEC organization, which will sooner or later lead to a breakdown of agreements by a number of participants.

If these rumors are confirmed next week, Brent crude will roll back to 30.00.

Hydrocarbon sales revenue in Russia fell by 40% between January and May. A drop in oil and gas prices threatens in the future with a 50% drop in exports to December, compared with 2019.

Of course we unwittingly pay attention to the online conversations about the denomination of the ruble. It is one thing when the exchange rate goes from 70 rubles to 140, this is a clear defeat for the government. It is another matter if, after denomination, the ruble exchange rate from 70 kopecks changes to 1 ruble 40 kopecks per dollar. Not everyone will realize that they were made twice as poor again as in 2014.

Meantime the ruble holds up well. And there are even chances to harden by 66.00, but the balance of trade in the second quarter is very alarming.

We already know about that fail of speculators who bid on the sell-off in the end of the current week. An emergency close of sellers positions led to a sharp increase in prices on Thursday and Friday. The bulls grabbed the wheat market, and are unlikely to give it away easily.

Growth scenario: September futures, the expiration date is September 14. It is good that we did not miss the jerk from 490.0. We see that the market won back the reduction in the forecast of gross harvest in the world and in the USA on Wednesday and Thursday. Someone always knows something on the market or thinks that knows.

Falling scenario: after reaching the level of 545.0 there will be a rollback to 516.0, but it’s more convenient to work on 1H intervals. Bulls can pull up the market to 590.0. Something more will hardly happen, since the proposal will be at a high level.

There are sellers more than buyers. Both bulls and bears come to the market, the fight for levels is increasing. In the case of a unidirectional move up or down, the market will accelerate due to the closing of positions with a loss of one of the parties.

Growth scenario: September futures, the expiration date is September 14. The reduction of USDA forecast gross harvest of corn by 2.13% did not impress bulls. They expected more. The Friday red candle is frankly scary, but we will not give up the idea of a market rising to 415.0 yet. Just hold longs, buy more, the bulls have a couple more weeks.

Falling scenario: if we are in the area of 500.0 now, we would go to short with delight. But we have 300.0 cents per bushel. The price levels are historically low, therefore we will not sell.

Growth scenario: September futures, the expiration date is September 14. The market corrected after USDA made it clear that there would be no decline in soybean yields this year. While it’s worth keeping longs and buying in the expectation of market growth to 950.0.

Falling scenario: we will patiently wait for prices to arrive at 950.0 in order to enter the sale there.

Growth scenario: October futures, the expiration date is September 30. If the market goes below 11.50, then there will be a threat of moving below 110.0, and this can already lead to a descent to 10.00. In respect that, we will buy here with a short stop order.

Falling scenario: continue to hold open positions for sale. If prices exit a growing channel, there is a chance that the decline will continue.

Growth scenario: September futures, the expiration date is September 18. We see the pullback that was predicted in the previous forecast. You can buy here. The risk is small.

Falling scenario: the one-way move up, which was nine days ago, still dominating. If the market returns at 94.00, it will be unpleasant. However, we do not sell. Prices are low.

The first sellers appeared on the market, while the buyers interest to the market began to fade. It is possible to see a turnaround. Note that the price is rising, and the balance of the open positions of speculators is shifting towards the bears.

Growth scenario: July futures, the expiration date is July 31. We see that the upward movement is fading. A break down on Thursday did not lead to success. And even if we go to the area of 45.00, it’s hard to believe in area 50.00.

Falling scenario: if there is no move to 45.00, then we can say that sellers have a significant medium-term advantage. So, no one sees the need to buy at the current prices and everyone agrees to a significant rollback.

Fundamental: the number of drilling rigs in the United States fell by 4 units to 181 units.

Sellers begin to take up the running bit by bit, building up their short positions. Meanwhile buyers began to retreat. We see a picture that suppose a turn down.

Growth scenario: August futures, the expiration date is July 21. Above 43.50 the market is not visible. The last shoot up can only form a “diagonal triangle”, but it will be difficult to go even higher. Do not buy.

Falling scenario: as a week earlier, we continue to believe that we have the right to count on a downward turn in this area. The burst up exhausted, here you can sell.

Growth scenario: August futures, the expiration date is August 12. The move to 430.0 is possible, however, a stronger growth is not visible. Do not buy.

Falling scenario: if the level 350.0 breaks down it will be necessary to enter the short. If we go to 430.0, then we must wait until the market react. Summer is at the peak. Demand for fuel will decrease.

Growth scenario: August futures, the expiration date of July 29. Fundamentally, any growth is out of question. Several U.S. LNG deliveries to Europe were canceled in August, as the market was overcrowded. Consumption by air conditioners is not able to remedy the situation. However, the market is looking forward and meet problems with gas production in the required volumes in a situation of falling drilling activity. In case of growth above 1.85 you can buy.

Falling scenario: don’t sell, as the market drew a something like a break up.

Growth scenario: if the Fed will buy up bad debts in the market, preventing the situation from getting worse, and there will be constant support to the stock market through liquidity injections, then reevaluation will go through gold and other precious metals. Hold longs.

Falling scenario: we continue to believe that we don’t need to sell above 1750 so far. Let’s not be rush with sales.

Growth scenario: the main idea is still alive, continue to wait the rising. Whether the Fed will lower the rate to zero on the 29th, that’s the question. If so, then the pair will quickly be at 1.2000 and will head for 1.4000.

Falling scenario: there is no doubt that Berlin, despite the epidemic and economic problems, will urge the south of Europe to ask for less debt and work more. On the other hand, we have been observing the demarches of the southerners for a long time, but things haven’t come to a divorce and are unlikely to come. For Spain and Italy, this is not the time to destroy current economic relations definitely.

Growth scenario: the RGBI is still in a good shape. We are waiting for the trade balance data in the second quarter next week. The release of this data may lead to strong movements in the market. We will take into account that in the current economic situation the Government of the Russian Federation hardly needs a strong ruble.

As long as the pair is above the level of 70.00 the bulls will have an advantage.

Falling scenario: sellers need to return the market below 69.70 so that a large number of market participants believe in the moving scenario to 66.00.

We see that the chance for a further rate cut by the Bank of Russia become lesser. We can assume that the current rate of 4.5% is unlikely to be reduced from current levels, which will provide support to the ruble.

Growth scenario: the market is in the range. There are no sellers, and the growth scenario by 1450 is becoming more and more real, especially since the SP500 index is preparing to set a new historic maximum in the US. The current levels for purchases are slightly overstated, but this should not prevent us from making a test long with a stop order at 1190.

Falling scenario: we continue to believe that a move to 1100 is possible. Our stop is at 1286. Current levels are attractive for sales. If the ruble weakens next week after the release of data about the trade balance, the way to 1100 on the RTSI will be open.