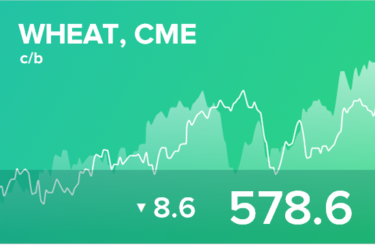 Thanksgiving in the United States has made the past week a little messy. In general, the market remained at the same levels. I would like to note the positive, which brings the expectation of the beginning of the active stage of vaccination, which will allow to reduce the rate of spread of the virus in the spring. So in Russia the program starts in December.

The more moisture accumulates in the fields, the less risk there will be for a failed 21/22 season. Thus, favorable weather in December, relatively warm with a lot of precipitation, is able to keep prices down.

In addition, if quotes remain at current levels, then many farmers in the United States and Europe, who did not believe in wheat before, will prefer to focus on this crop in the spring, as current prices are in line with 2014 levels. The increase in acreage is also able to restrain the rise in prices on the grain market.

By reading our predictions, you could have made money in the gold market by taking a move down from $ 1890 to $ 1780 per troy oz.

The grain market is strong. Wheat is below the 600.0 level, while corn is growing moderately with no plans to visit 435.0 cents a bushel.

Increased demand for feed from China and Europe, coupled with a sharp drop in the actual corn harvest in Ukraine by a serious 8 million tons, which is 22%, forced grain prices to remain at high levels.

Reports of positive testing for a number of vaccines led bidders to be positively charged. There are no prerequisites for a drop in demand now, but there are prerequisites for a poor harvest in 2021. Particularly, due to the La Niña effect, which will dry up the entire south of the United States next summer. This could lead to a stronger rise in prices next year.

Biden can celebrate. Is his victory easier for the rest of the world?

Taking into account the fact that with his arrival the markets assess the prospects of the dollar in a negative way, it is enough to look at the behavior of the euro and gold, it will become somewhat easier for many countries with dollar debts. Those who have collected the reserves of this currency, China and Japan, will have to be ready to come to terms with losses.

With the arrival of the Democrats, the grain market should become more elastic, which implies smooth, free from strong jumps in price changes.

The United States, now clearly, will come under the control of a cohort of individuals, rather than one person who frightens the world through Twitter. All reasonable humanity counts on the fact that Biden, due to his age, will be a waxwork, but not a person with real power. Otherwise, Trump’s reign will seem like a cute prank to the World.

By reading our forecasts, you could have made money in the natural gas market by taking a move up from 2.450 to 3.080.

In the United States next week, there will be a US presidential election. Candidates with more than a solid age for such a position: Trump 74, Biden 77, will try to earn the trust of Americans.

If Biden wins, one can count on more active foreign trade and fewer trade wars, which should lead to a more efficient distribution of produced goods and resources, and, possibly, a softer confrontation along the Washington-Beijing line.

The grain market is likely to welcome Biden’s victory with slight optimism. Wheat and corn prices will receive some support.

In the event of Trump’s victory in the market, the tendency to high volatility will remain, trading will go on at a nervous ragged pace.

Panic buying of grain from the new harvest is doing its job. Exchange prices for wheat in Chicago have not yet rolled back and are claiming to reach the level of 670 cents per bushel, which is comparable to FOB prices around $ 260 per ton.

The World Bank has estimated the rise in food commodity prices in July-September 2020. On average, prices rose 6% — with growth seen in almost all categories.

In October, growth continued in almost all agricultural crops and processed products. Only coffee is allocated, the cost of which decreased in October.

Rising food costs will hit the poor, keeping governments in suspense in many countries as discontent rises.

Expansion of production and reserves in Russia helps to increase the country’s exports by 1.5 million tonnes in 2020/21. According to the forecast, the volume of Russian exports in 2020/21 will amount to 39 million tons, second only to the figure of 2017/18, when 41.5 million tons were exported.

Exchange prices are pushed up by increased demand from importing countries amid the pandemic. The structure of food consumption by the population is changing, shifting towards grain and vegetable oils. For example, domestic consumption of wheat in China this year will reach a record 130 million tons.

It is likely that after the pause, prices for soft red wheat in Chicago will hit 675 cents a bushel.

After the release of data on Friday, the wheat market stopped growing, the corn market continued to move up.

Both crops continue to be in an upward trend despite record harvests. This is due to the desire of importers to create more substantial stocks of food in case countries have to introduce strict quarantines due to the virus, which will lead to paralysis in ports for a while.

The market has reached an equilibrium position and is in no hurry to get out of it. The quarterly data from the USDA on grain stocks in the US, although they turned out to be worse than expected, could not fundamentally improve the position of bulls in the market.

So, after the upward price jump in the wheat market, there was an immediate pullback downward. This tells us about a large number of sellers who are ready to sell contracts when approaching the level of 600.0 cents per bushel.

The strengthening of the dollar last week suspended the growth of prices for wheat and corn, however, for now we cannot say that a downward reversal is outlined in the grain market.

The IGC has cut its forecast for cereals global production (wheat and coarse grains) in 2020/21 by 3 million tons compared to last month to 2,227 million tons. The new crop is up 46 million tonnes from the previous year, driven primarily by a 39 million tonne increase in corn production to a record 1,160 million tonnes.

Prices will not be easy to rise against the background of actual abundance. At this stage, the market can only be pushed up by fears of coronavirus and local collusion of exporters, which is unlikely to last long, since not everyone has long-term storage opportunities. In order not to ruin the grain, very soon a number of companies will offer their products at tenders at prices lower than those of competitors.

The results of wheat supply tenders to Egypt and Turkey can be considered as a lopsided game. Prices rose by 14% in a month, from $ 206 to $ 235 per ton, and this is against the backdrop of a huge harvest. What can push prices up, other than collusion among competitors?

First and obvious staff: coronavirus and an increase in the number of infections. Who knows whether quarantine will be introduced in ports in late autumn or winter, as it was already in the spring of 2020, because of which it will not be possible to replenish grain stocks. So, we need to buy now, while everything is calm.

The second and unobvious: since 2011, the La Niña effect in the Pacific Ocean was remembered only in passing. However, on September 10, the US Climate Prediction Center stated that the phenomenon can be considered formed.

La Niña usually brings above average rainfall to Australia and Southeast Asia, which can lead to flooding. May dry out southern United States in winter. Arable land in Argentina may become drier and drought is possible in parts of Brazil.

Aware, one can understand the concern of grain importers who are ready to succumb in such circumstances to blackmailing sellers.

The USDA report was released on Friday.

What we see: the gross yield of wheat increased by 0.58% to 770.49 million tons, which is a bit unexpected if we proceed from the messages that we received during August. If they harvest just that much, it will be a world record. For Russia, the forecast remains the same: 78 million tons.

The forecast for the gross corn harvest has been reduced to 1162.38 million tons. Despite the decline in the forecast, the numbers continue to be record highs for humanity. For the USA, the forecast was immediately reduced by 10 million tons, which was expected, but nevertheless, in fact, became an unpleasant surprise for the market.

Exporters on September 3 offered Egypt at the next tender wheat at $ 225 per ton and more. As a result, out of 11 participants, the product was purchased from one. This is actually a failure. The Egyptian government urges traders not to bury themselves. The $ 20 price hike in two weeks irritates the largest buyer. Prices have reached a pain threshold and the exporter is not willing to pay more.

There are problems with corn in China. There is an internal rise in prices for it, which creates the preconditions for large purchases from abroad, primarily from the USA. This fact should support the market for the main forage crop.

We are waiting for the next USDA report on 11 September. It is expected that the volume of gross harvest in the current season for wheat and corn will be adjusted downward.

Reading our forecasts, you could make money on the soybean market by taking a move from 863 to 960.