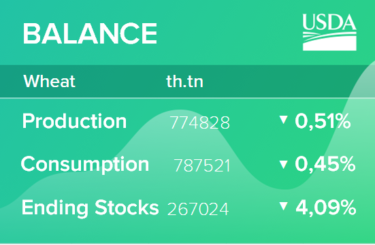 Expansion of production and reserves in Russia helps to increase the country’s exports by 1.5 million tonnes in 2020/21. According to the forecast, the volume of Russian exports in 2020/21 will amount to 39 million tons, second only to the figure of 2017/18, when 41.5 million tons were exported.

Exchange prices are pushed up by increased demand from importing countries amid the pandemic. The structure of food consumption by the population is changing, shifting towards grain and vegetable oils. For example, domestic consumption of wheat in China this year will reach a record 130 million tons.

It is likely that after the pause, prices for soft red wheat in Chicago will hit 675 cents a bushel.

The thought-provoking loop of the OPEC meeting on the 19th is tightening around the market’s neck. The technical committee on the 15th expressed concern about the second wave of the pandemic, which automatically shifts the focus to taking measures to strengthen the parameters of the deal to reduce production.

As it turned out, the countries trespassed the agreement from June to September inclusively and threw into the market 2.5 million barrels per day extra. And no one knows how to force them, in fact, not in word, to comply with the agreement.

The cartel predicts global GDP growth in 2021 at 4.6% after falling 4.1% in 2020. This is an extremely optimistic scenario. Apparently, the leaders have no political opportunity to stop being in la-la land.

Meanwhile, the number of drilling rigs began to grow in the US, sooner or later will lead to an increase in production in the country.

A pullback to 35.00 Brent is seen as the most plausible scenario at the moment.

The Ministry of Finance last week set a record for the placement of FLBs. They managed to borrow 350 billion rubles. Little more auctions and this year’s budget problem can be considered solved. Since the public debt is relatively small in relation to GDP, it can still be increased without problems.

The ruble is in no hurry to weaken against the dollar, as economic problems remain in the US.

Last week, there was no significant improvement in the US labor market. The number of initial applications for unemployment benefits still exceeds 800 thousand. It is difficult for the dollar to strengthen in such conditions. Besides, there is no clear leader in the presidential race, and it is impossible to predict how the elections will end.

Meanwhile, there are only 11 trading days left before the US presidential election on November 3rd. Most likely, in conditions of uncertainty, we will not see any strong movements in the foreign exchange market during this period.

Buyers continue to enter the market, we associate it with pandemic fears. A record harvest in a calm environment would have plunged the quotes into a depression, but now we do not see this, as countries replenish food supplies in excess.

Growth scenario: December futures, the expiration date December 14. Prices came to an intermediate target at 630.0. Now there should be a pause for several trading days after which the growth can be continued. The main goal of the movement is 675.0.

Falling scenario: it makes sense to sell only when approaching 675.0. A downward reversal may follow from the current levels for some time, but it is better to work it out on hourly intervals.

Growth in the corn market was frankly delayed. It is possible that last week we saw the maximum number of buyers, +22 thousand contracts, and then, until the end of the year, their number is unlikely to exceed this figure in any of the weeks. The market is overheated.

Growth scenario: December futures, the expiration date December 14. The market is not rolling back. We cannot enter the purchase nicely. We will continue to stay out of the market and wait for acceptable levels.

Falling scenario: if we approach 430.0, we will sell without fail. The short from the current levels can be executed on hourly intervals with the target at 387.0.

Growth scenario: November futures, the expiration date November 13. Market growth has stopped. We can expect a rollback to 1000.0. After that, with a very high degree of probability, the rise in prices will continue.

Falling scenario: we will continue to wait calmly for the price approach to 1180. Short from the current levels is possible on hourly intervals with a target of 1000.0.

Growth scenario: March futures, the expiration date February 26. Prices indicated support at 13.80 and then went up. We keep longs. The target at 15.95 remains. The stop is aggressively pushed to the support level.

Falling scenario: we will sell when approaching 16.00, not earlier. Sugar, after grain and vegetable oil, can be classified as strategic products. Surely states will buy it for long-term storage.

Growth scenario: December futures, the expiration date December 18. It will be very unpleasant if the market falls below 105.0. Against the general optimistic background, this fall will look completely unnecessary. We buy. We keep the longs opened earlier.

Falling scenario: sellers have nothing to do in the market yet. You can think about shorts from 125.0, or in case of falling below 100.0.

We see sellers leaving the market, which may be caused by the expectation of OPEC’s decision to cut production. Some growth of buyers is not yet able to accelerate prices to pass through important resistance levels. Monday can be quite volatile due to the OPEC meeting.

Growth scenario: October futures, the expiration date October 30. Until the 44.00 level is taken, we will not consider buying. But even if an upward movement does occur, growth should be treated very carefully, as it is unlikely to be supported by expectations of an increase in oil demand.

Falling scenario: current levels and rise to 44.00 can be used for selling. Note that on Monday it is wiser to wait for the results of the OPEC ministers’ talks before entering the market.

Purchase: think after rising above 44.00.

Fundamental US data: the number of active drilling rigs increased by 12 units to 205 units.

Money keeps leaving the market making it more and more subtle. This is normal while waiting for a decision on the OPEC deal. We need to be prepared for strong moves in the market next week, starting directly on Monday.

Growth scenario: December futures, the expiration date November 20. Until we have risen above 42.00, we will not talk about purchases. In case of growth above this level, we suggest carefully considering the risks of the transaction.

Falling scenario: pandemic must defeat any OPEC cuts. But no one really knows what will happen. The move to 33.00 seems to be correct, since having given up the market now, the bulls will not lose anything in the future. From 33.00 it is much more pleasant to buy than from 42.00. We are waiting for the meeting of the ministers of the countries of the OPEC + deal.

Purchase: think after rising above 42.00.

Sale: think after the market falls below 39.00.

Growth scenario: November futures, the expiration date November 12. We do not open new positions below 355.0. Note that the market may surprise you, approach 370.0 and turn down.

Falling scenario: watching oil on Monday. If it starts to fall, then it is worth selling. Otherwise, we look up.

Growth scenario: November futures, the expiration date October 28. You can keep longs, and in case of growth above 3.000 it is worth adding. The coming winter should make buyers nervous.

Falling scenario: there is no point in selling. We need a rise to at least 3.500. We consider the current levels to be understated.

Growth scenario: we see that dollar fans are still keeping the market under control. Prices continue to remain within the falling price channel. We will only think about buying after the market rises above 1935.0.

Falling scenario: if prices go below 1875, then we can count on the continuation of the fall to 1770. In this case, the previously opened shorts can be increased.

Growth scenario: the picture is ambiguous. We have been declining all week, but we have remained lying on the previously broken support, unable to pass below it. In case of another rise in prices above 1.1800, we will buy again. We have no desire to miss the move to 1.2500.

Falling scenario: we do not open new positions. Just keep the old ones. If the dollar is destined to get stronger, then it may well go to the 1.1000 area.

Growth scenario: within three days they failed to break through the resistance at 78.50. The bulls are unlikely to be able to move higher without falling oil prices. While the Government of the Russian Federation successfully solves the problem of the deficit, albeit getting into debt, the ruble will remain in good shape. Weakening of the ruble in the current situation is not visible.

The meeting of the Central Bank of the Russian Federation will be October 23rd. It is unlikely that the rate will be raised in the current situation. Only the pair’s growth above 80.00 will make Nabiullina think about revising the rate due to the threat of inflation acceleration.

Falling scenario: sell here. Failure to take 78.50 looks tempting. If the dollar index fails to bear the expectations of the US presidential election, the pair will have a chance to move towards 74.00.

Growth scenario: prices went down from consolidation. It is difficult to expect the growth of the Russian market amid falling global GDP. It’s reduces the revenue of export-oriented companies and creates conditions for the cancellation of payments or extremely modest dividends in 2021 based on the results of work in 2020.

Falling scenario: we see that the market has chosen to move to 1075. In the current situation, we will continue to hold the previously opened shorts. We monitor oil prices and the rate of the Central Bank of the Russian Federation. If the rate is unexpectedly raised on Friday, the RTS index will accelerate its decline.