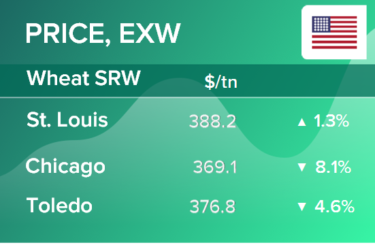 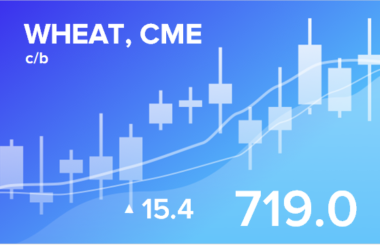 The market is awaiting the USDA report on Thursday. If we rely on the reports of individual countries, it can be assumed that the forecast for the gross harvest of wheat will be reduced by 5-7 million tons. If the numbers turn out to be even worse, then the market this August may remain at current levels and look up from them.

Brazil will face one of the worst droughts in 90 years, according to the USDA. Limited stocks of soybeans and especially corn will remain in Brazil until 2022, which, combined with strong demand for corn and soybeans in China, makes it highly likely that prices will rise in the coming months.

As such, analysts see good opportunities for US soybean and corn producers to expand their market share during periods of declining Brazilian exports.

The American economy in July created slightly more jobs than expected from it, which had a positive effect on the dollar index, but did not affect the commodity group in any way, with the exception of gold, which lost some in value on Friday.

While the question of whether the big money will be put on strengthening the dollar remains open. Too much debt, money is printed too quickly. Everyone is scared.

Oil in the current environment may continue to decline. However, we cannot talk about the move below 60.00 yet. This scenario can be realized only in the event of a new round of the spread of the infection around the world.

Demand for energy resources, in particular for gas, remains high so far, which will support oil prices. At current prices, projects that were previously frozen are becoming profitable, in particular, there is a «reanimation» of abandoned unfinished hydraulic fracturing rigs in the United States, therefore, along with the rise in prices, we will get an increase in production, which will prevent strong price fluctuations in the future.

Despite the strengthening of the US dollar on Friday, the ruble still looks good.

The market’s interpretation of the current statistics, given a possible rate hike in the US in the future, will not necessarily be in favor of the dollar. Until Powell and company move from words to deeds, the dollar bulls are unlikely to accelerate strongly.

Nevertheless, we urge you to follow the development of events (unemployment in the US, GDP growth, bankers’ statements, pandemic) in order not to miss the moment when investors look at the dollar with optimism.

On Friday, the global stock market did not fall on the back of unemployment data, which suggests that stockholders do not yet see the prospects for an increase in interest rates.

Over the past week, the difference between long and short positions of managers increased by 12.3 thousand contracts. At the same time, the price increased by 19.6 cents. Before the release of the USDA report, speculators are betting on growth. This keeps the prices up. Growth scenario: September futures, expiration date September 14. The situation is not easy. The market may surprise you in August and continue to grow.

Falling scenario: if prices manage to go below 675.0, we will return to sales. Until then, out of the market.

Sale: thinking after falling below 675.0. 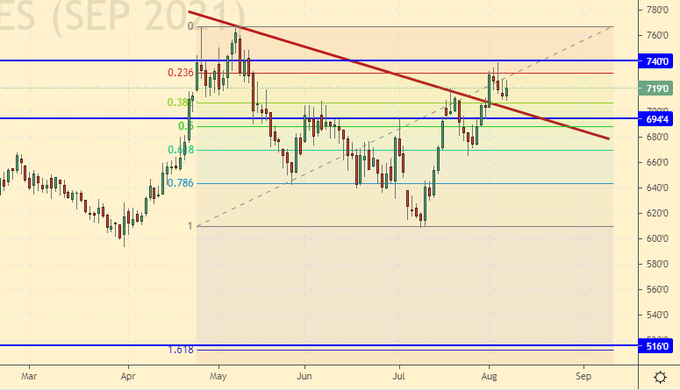 Over the past week, the difference between long and short positions of managers increased by 16.7 thousand contracts, while the price remained practically in place. Market participants place preliminary bets on price increases.

Growth scenario: September futures, expiration date September 14. From the point of view of tactics, nothing has changed if the market rises above 580.0, we will buy.

Falling scenario: if you try to close the gap at 587.0, you can sell. We do not carry out new sales from the current levels. 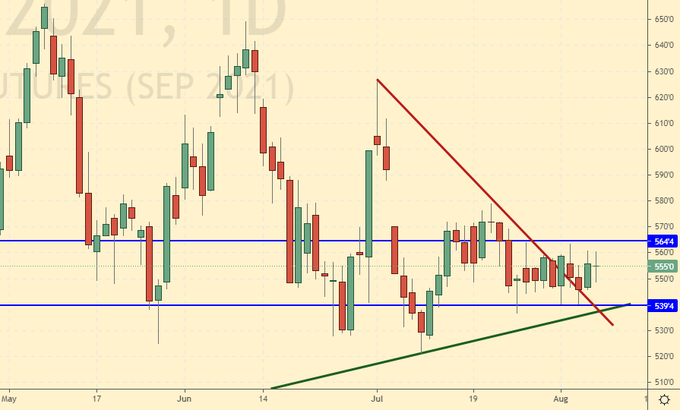 Growth scenario: September futures, expiration date September 14. The outlook for soybeans in Brazil is poor, which supports the market. We will carefully buy from the current levels.

Falling scenario: we will continue to hold the shorts, but move the stop orders. Cereals are not going to fall. This is alarming. Recommendation: 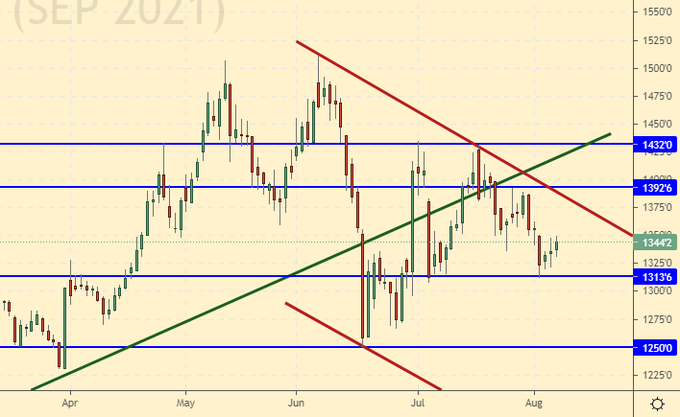 Growth scenario: considering the October futures, the expiration date is September 30. We continue to dream about 19.50. The current state of affairs suggests continued growth. We move the stop order along the trend.

Falling scenario: wait for the 19.50 mark and sell with little risk. It cannot be ruled out that the entire group of food products will continue to grow. Sugar can also travel higher. Recommendation: 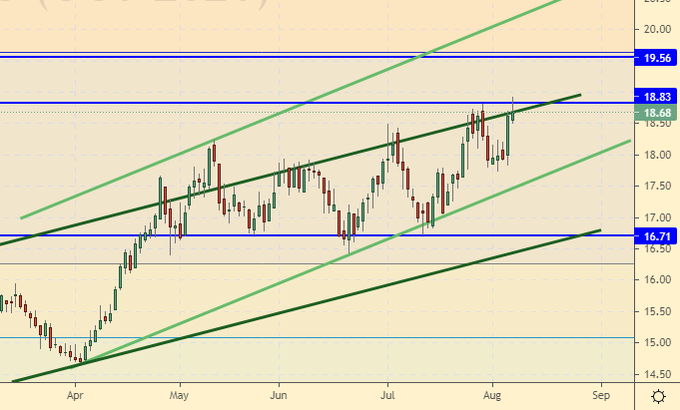 Growth scenario: September futures, expiration date September 20. We will buy here. The demand for coffee is not going anywhere, and problems with gross harvest remain.

Falling scenario: don’t sell yet. If we go up to 245.0 we will enter the short. Recommendation: 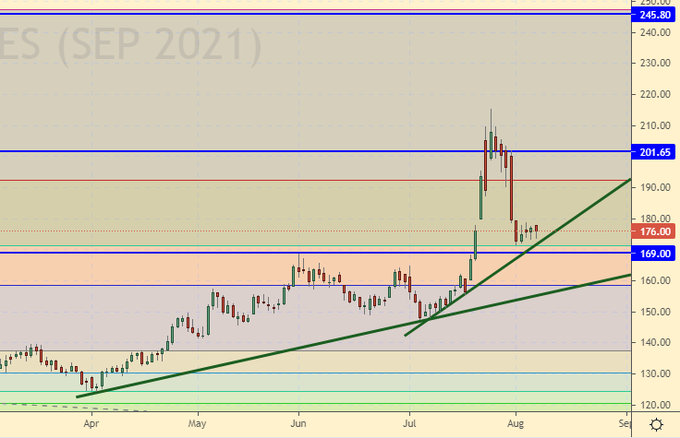 Over the past week, the difference between long and short positions of managers has increased by 4 thousand contracts. At the same time, the price increased by $ 0.94. The changes can be considered insignificant. On Tuesday last week the market was in equilibrium, which swayed towards the bulls closer to Friday.

Growth scenario: August futures, the expiration date is August 31. We will postpone the question of a possible purchase for a week. Out of the market.

Falling scenario: a short opened two weeks ago started to make a profit. We will keep it counting on a fall to the 60.00 area. Recommendation: 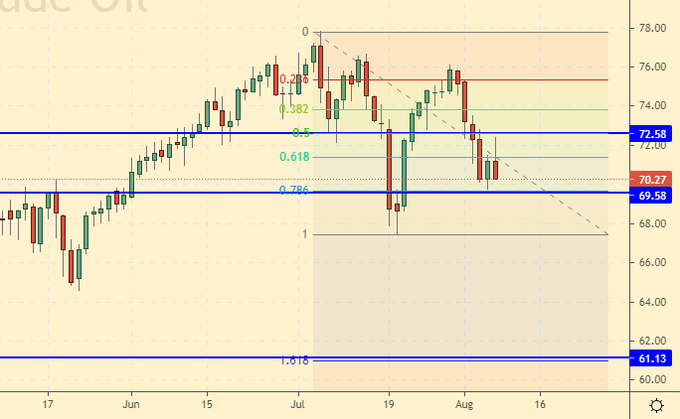 Fundamental US data: the number of active drilling rigs increased by 2 units and is 387 units.

Over the past week, the difference between long and short positions of managers decreased by 17.4 thousand contracts. At the same time, the price rose by $ 1.92. The reduction in bulls’ positions looks significant. This ultimately led to a drop in prices.

Growth scenario: September futures, the expiration date is August 20. The bulls failed to take the 75.00 area and retreated. Out of the market.

Falling scenario: the price did not reach the stop order by 7 cents. We continue to stand in shorts. The prospect of the market falling to 58.00 after a prolonged growth is seen. Recommendation: 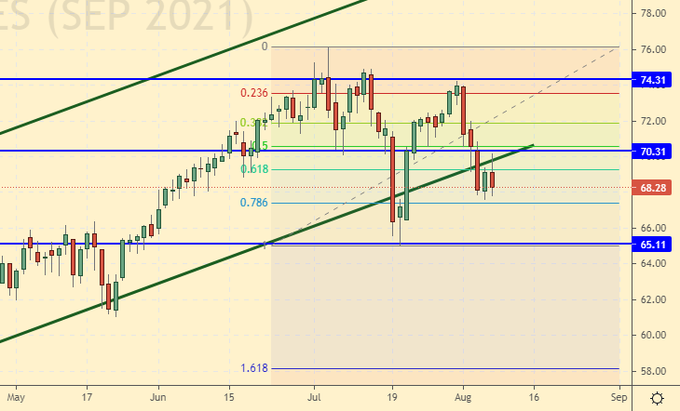 Growth scenario: September futures, expiration date is September 10th. We continue to remain out of the market. As we approach 520.0, let’s start thinking about longs.

Falling scenario: our short survived. The decision on a slight upward shift of the stop order turned out to be correct, this cannot be done, but sometimes it is possible. We keep sales. 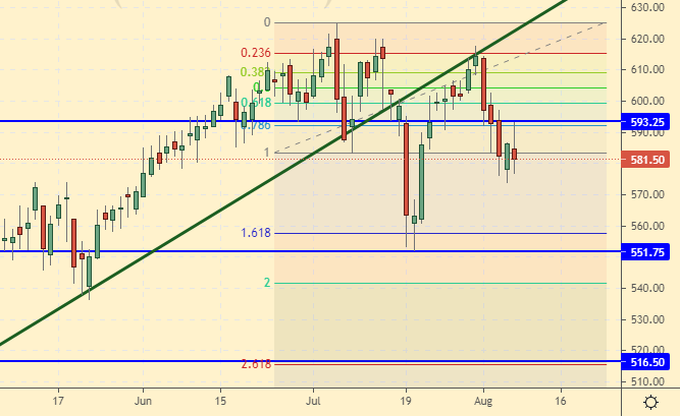 Falling scenario: if gas does not appear in European storage facilities, and most likely it will be, then no matter how interesting the short from 4.500 is, it is better not to think about it for now. 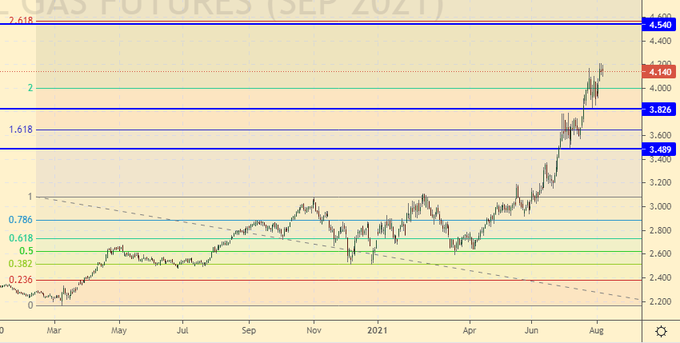 Growth scenario: good data on the US labor market threw gold bulls off the pedestal. Whether the dollar will be able to strengthen further is still a question. We will buy from the current levels.

Falling scenario: we are waiting for a fall below 1750, then we will think. What is happening is not logical. Sales do not look very promising against the backdrop of mountains of cut paper. 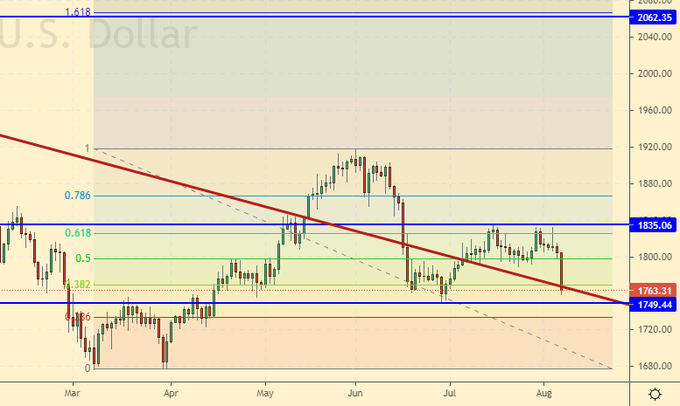 Growth scenario: the dollar somehow denotes its own brutality. Let’s see what will happen next. Out of the market.

Falling scenario: keep the short. Are we going to go to 1.1000? And what will we do when it turns out that there will be no rate hike in the US? Interesting… 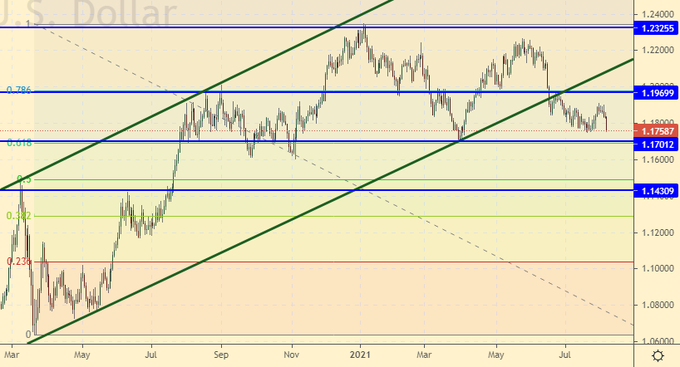 Growth scenario: the ruble fell on Friday on the eaves in front of the dollar, which is about, tomorrow, will begin to grow to all living and dead. Yes, we are in the longs, yes, we will hold positions, but the current strength of the American is not fundamentally backed up by anything. Only market rumors.

Falling scenario: we will hold off with sales. On the purchase of new borrowings from the Russian Federation, the Americans imposed a ban on their financial institutions, read between the lines «for everyone», so when oil prices decline, we will have to take into account the drop in foreign exchange earnings and the drop in the trade balance. 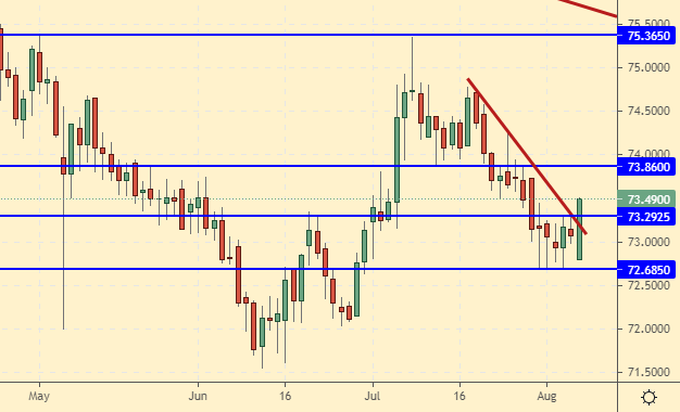 Growth scenario: the RTS index dropped somewhat only due to the fall in the ruble exchange rate. Optimism in the global stock market remains. Now we cannot say that there will be no more growth.

Falling scenario: if prices go below 160000 we will think about shorts. Out of the market so far. 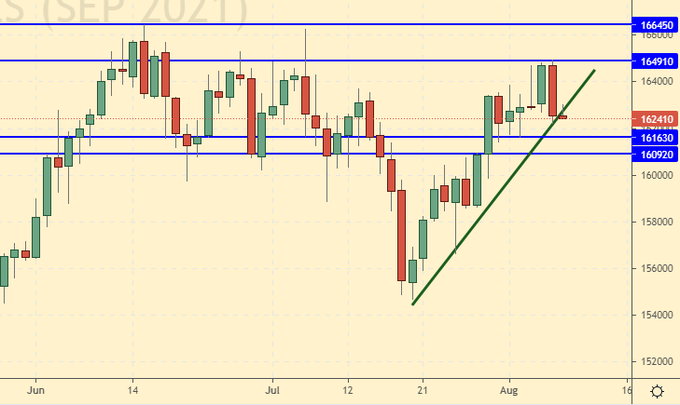