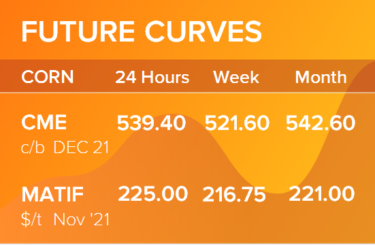 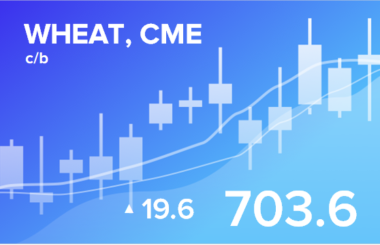 IGC cut its grain harvest by 6 million tonnes in the 21/22 season to 2,295 million tonnes. Wheat harvest is projected at 788 million tons, 1 million tons less than a month earlier. The fall in the forecast is associated with problems with spring crops in the United States, as well as drought in Brazil. Flood damage in Europe and China has yet to be assessed, but is unlikely to be global.

The market should fall in August against the background of a new harvest. Given the nervousness of the situation with the pandemic, it is possible that the fall will not be strong, but we can expect a 10-12% decline. In this sense, the USDA report, which will be released in ten days, will have a strong impact on the market. If forecasts for gross collection sharply deteriorate, then we may expect a price spurt upward, as it was previously predicted that consumption will be equal to demand. And if production falls, there will be a threat of deficit.

Note that if prices rise in August, this could lead to a spiral unfolding to its maximum values. For wheat, this is the 1350.0 level.

The situation on the oil market is becoming tenser and tenser. On the one hand, it is becoming more and more difficult to find fundamental reasons for growth, and on the other hand, there are still no brave souls who would bet on a fall. As a result, we continue to grow slowly.

This growth is partly supported by the weakness of the dollar after the Fed meeting, partly by the continuing decline in oil reserves in the United States. But, falling stocks should soon stop helping the market, as the season of high demand is coming to an end. In addition, production in the United States, albeit unevenly, has been growing recently, which will also be a factor holding back prices.

Note that Saudi Arabia budgeted $ 80 for oil at the beginning of 2020, but such prices were not even close, the kingdom had to actively borrow money. The year 2021 brought relief in this regard. It is not yet clear whether the Saudi Arabia will try to compensate for the losses as soon as possible and not respond to price increases, despite the risk of developing expensive projects in the world, or whether it will prefer to be strictly within the framework of the OPEC + agreement, because oil that is too expensive now may turn into a surplus in the future.

The fundamental situation with ruble has not raised any concerns yet. With expensive oil and a high Central Bank rate, the national currency can feel quite comfortable. The demand for Russian bonds is still growing. The main thing is that inflationary pressure does not grow. But this is precisely where the danger lies.

The rise in prices is not only in rubles, but also in dollars. Powell closed his eyes, while Americans and Europeans continue to pump money into the system, which already leads to the fact that consumers, analyzing such vandalism, rightly believe that prices will continue to rise, since the money supply is growing faster than the world economy. This leads to a rush of demand for durable goods and real estate, which in turn further accelerates prices.

Over the past week, the difference between long and short positions of managers increased by 5.7 thousand contracts. The changes are minimal. The market was in equilibrium on Tuesday last week, but judging by the last trading days, we can say that the bulls are coming, trying to push the market up. Growth scenario: September futures, expiration date September 14. The situation is tense. If prices manage to rise above the 715.0 area, then we can get a move to 750.0.

Falling scenario: here you can go short. Friday gives little hope that prices will continue to fall on Monday. But, since we have wild capitalism in our yard, and the farmers will keep the grain this season until the last, then an unpleasant surprise may await us in the form of a strong blow from the side of the bulls. 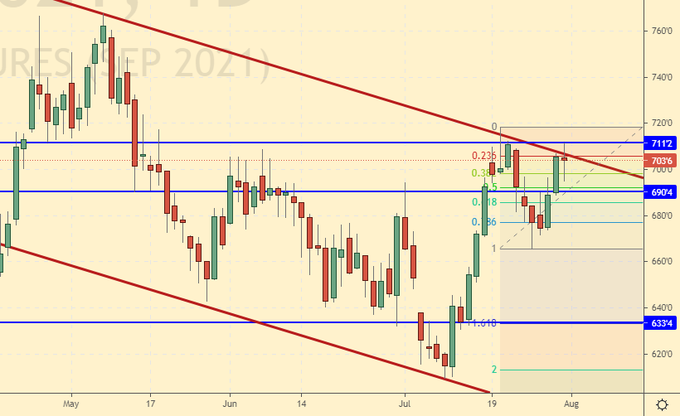 Over the past week, the difference between long and short positions of managers increased by 7.4 thousand contracts. The changes are minor. Sellers aren’t running, and neither are buyers. The question here is who will be the first to falter. For a fall, for example, you need a large international spot trade at a price lower than the current one.

Growth scenario: September futures, expiration date September 14. If the market rises above 580.0, we will buy.

Falling scenario: no change so far. When trying to close the gap at 587.0, shorts are required. Sales from current levels are possible. 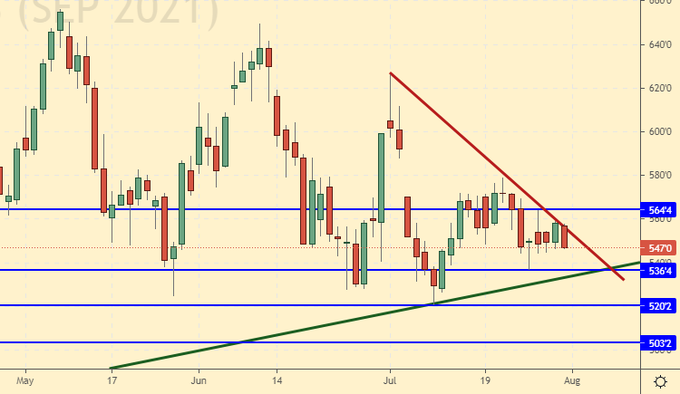 Growth scenario: September futures, expiration date September 14. Sellers have not yet given a reason to buy. We see a strong Red Friday. Out of the market. Falling scenario: keep holding the shorts. Moreover, after such a weak Friday, you can add. Recommendation: 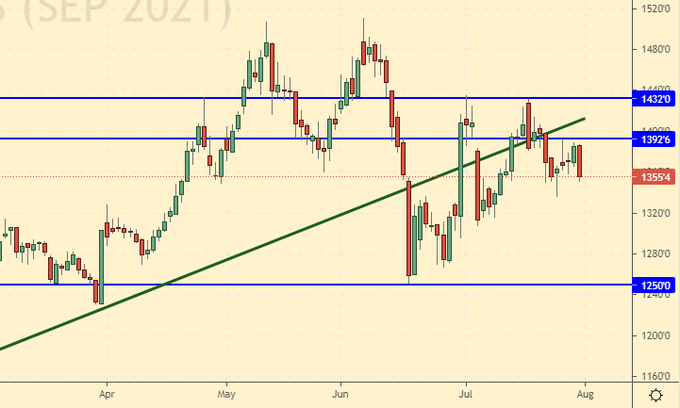 Growth scenario: October futures, the expiration date is September 30. An unpleasant fall on Thursday and Friday. Nevertheless, we will continue to long with targets at 19.50. Move the stop order closer to the place of events.

Falling scenario: I wanted to see the 19.50 mark. It is not yet clear what to do if we do not come to her. We do not sell from the current levels. 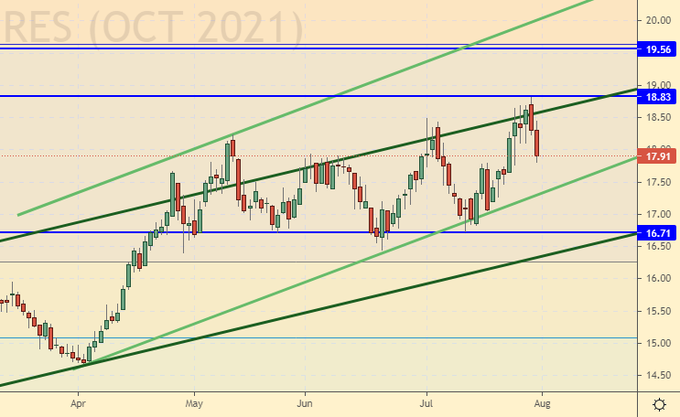 Growth scenario: September futures, the expiration date is September 20. Friday was emotional. However, the problems with the coffee harvest in Brazil did not disappear overnight. While buying.

Falling scenario: continue to pause. If we go up to 245.0 we will definitely sell. 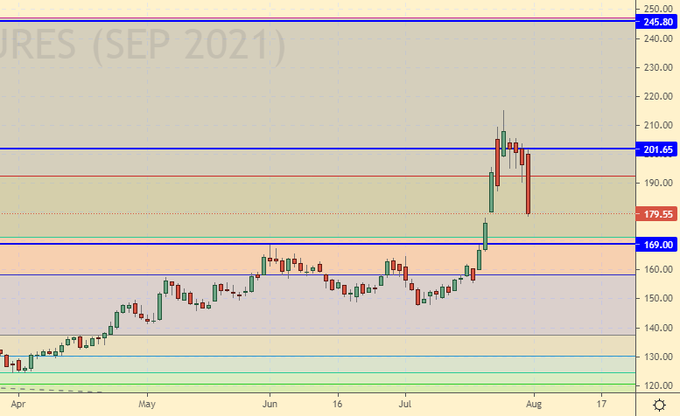 We’re looking at the volume of open interest of  Brent managers. You should keep in your mind that these are data from three days ago (for Tuesday of the past week), they are also the most recent of those published by the ICE exchange.

Over the past week, the difference between long and short positions of managers increased by 37.2 thousand contracts. At the same time, the price increased by $ 0.97. The bulls returned to the market, and the sellers fled. We need verbal intervention, for example, from OPEC, for prices to go down.

Growth scenario: August futures, expiration date August 31. We will keep it long. The situation for the bulls is more than comfortable.

Falling scenario: since our stop at 76.30 survived, let’s leave the short. Those interested can sell at the current levels. In case of falling below 73.00, you can add. 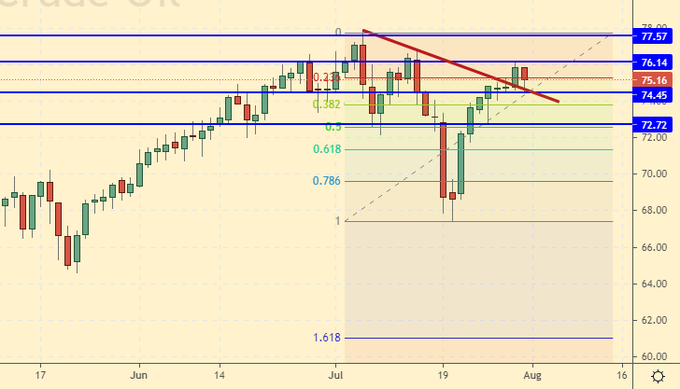 Fundamental US data: the number of active drilling rigs decreased by 2 units and is 385 units.

Over the past week, the difference between long and short positions of managers decreased by 2.7 thousand contracts. At the same time, the price dropped by $ 0.12. Unlike Brent, WTI does not show a change in market sentiment from bearish to bullish. Sellers continue to enter the market. There is information that some hedge funds have reduced their bullish positions.

Falling scenario: bulls own the market. The chances of a downward reversal still remain, but they are small. If we have an emerging correction 3 — 3 — 5, with targets at 59.00, then we cannot deny testing the level of 76.00, but we should not rise above it. Recommendation: 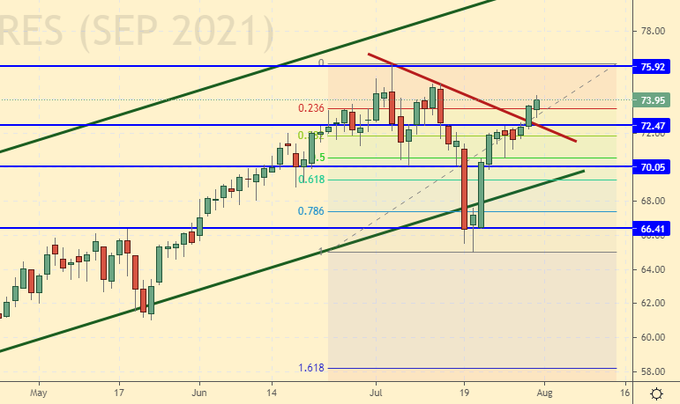 Growth scenario: August futures, the expiration date is August 12th. The market is still growing. This is somewhat surprising, but we have to believe our own eyes. We do not buy from the current levels. Late.

Falling scenario: let’s try to work out the idea of a 3–3–5 correction (see Elliott waves). Let’s move the stop order up, which in fact is not recommended according to the classics. 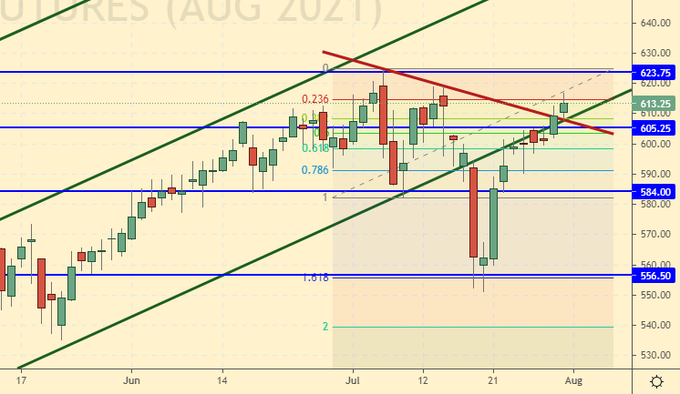 Growth scenario: September futures, expiration date August 27. The European wave of rising gas prices has reached the United States as well. Most likely we will see a touch of 4.500. But further ascent is questionable.

Falling scenario: let’s think about shorts from 4.500. From the point of view of technology, the level is not bad.

Growth scenario: after Powell deprived the dollar of all support on Wednesday, it would be very strange to see gold fall. We buy.

Falling scenario: from the point of view of the technique of shorts from the current levels, it is interesting, however, given the foundation, we will wait for the fall below 1760.0. Sellers have nothing to rely on against gold yet. The banks have a lot of money and they will gradually buy up precious metals. 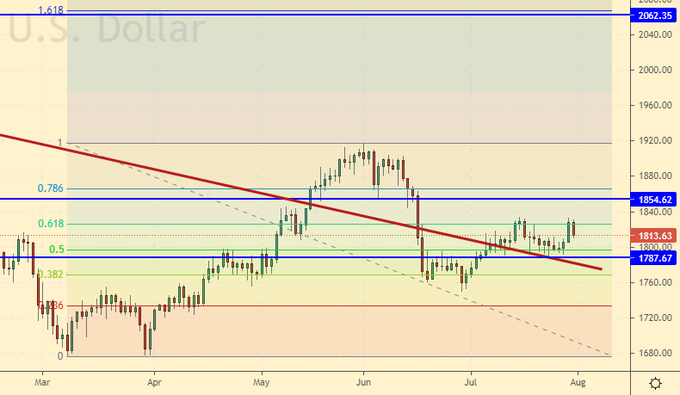 Growth scenario: the euro is fundamentally weak, but the dollar is even weaker. At the beginning of the year, the people expected that the policy of low rates in the United States was about to come to an end. But Powell demands that all hereditary parasites find a job and only after that the rates will be raised. This is a game. Moreover, its goal is to weaken the pressure on public debt payments due to artificial inflation. The growth of the dollar, at least, is still being postponed. Can buy.

Falling scenario: let’s not close the old short. It is possible that something will change. However, we will definitely not open new positions. There is an equilibrium in the market for the current day. Recommendations: 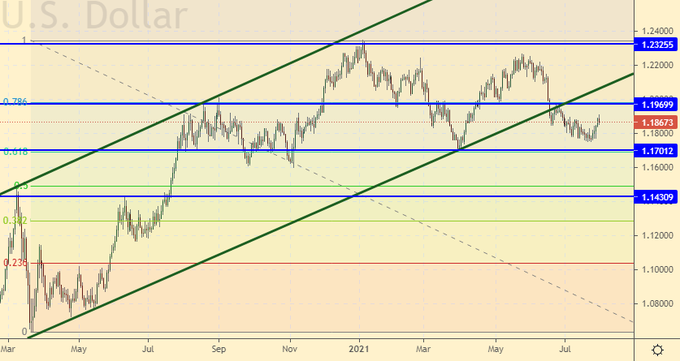 Growth scenario: the ruble has been correlating with oil in recent days, as there are no other drivers. Technically, the situation is not bad for entering a long. We keep the old positions.

Falling scenario: as long as the dollar does not bend in relation to all living things, it is very difficult to sell it against the ruble, even with the prospect of a decline to 70.00. Out of the market. Recommendations: 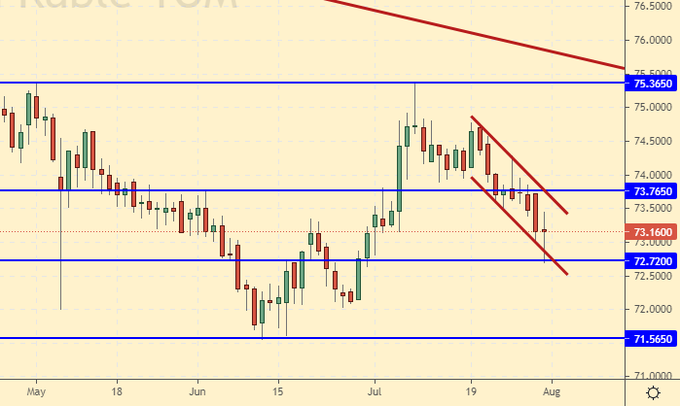 Growth scenario: a cheap dollar keeps global stock markets afloat. If the financial statements of companies in the United States show good earnings, and this is possible due to banal inflation, then the stock market may continue to grow.

There are suspicions that the US Administration has already begun to behave according to the French formula: «after us the deluge! », which was voiced to her King Louis XV by the Marquis de Pompadour at the time of his difficult experiences. With a soft monetary policy in the US, the stock market could surge up again in the fall. And the crisis will be forgotten for a while.

Falling scenario: let’s not talk a lot, just work out the technique. We stand in the previously opened shorts and sell now with little risk. 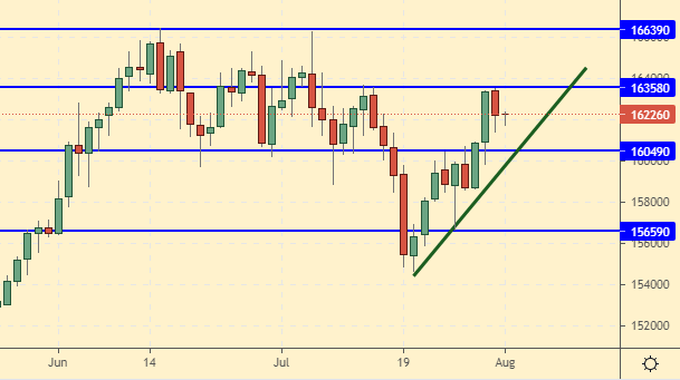