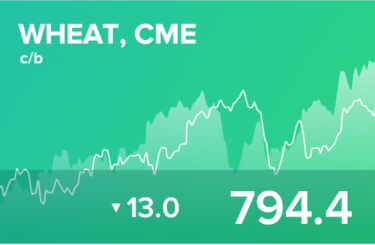 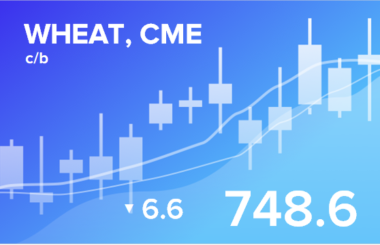 Wheat, after falling stocks in the US to a 14-year low, continued to rise on the stock exchange in Chicago. Most likely, prices will remain high in October, and then everything will depend on how quickly traditional importers will sort out the new crop. It is possible that the consequences of 2020 will affect a number of countries whose economies are partially or completely oriented towards tourism. These are Egypt, Indonesia, Thailand, and others. Whether they will be able to afford to increase their grain and flour stocks is a big question.

In addition to the pandemic, at the moment, high gas prices have become a serious obstacle to the growth of demand. There is little doubt that residential tariffs in Europe will rise significantly. The growth of utility bills will also entail more modest behavior of citizens. You can drink coffee not in a cafe, but at home. A reduction in consumption will inevitably occur, as incomes will not keep up with household spending. November and December could turn bearish in commodity markets, including cereals.

Biden extended his government funding until December 3rd. Now America will not be in default for a couple of months. The dollar should have strengthened in October, after Washington adopted the budget for next year, but now, due to the vague situation, we can expect a weakening of the dollar index, since everything is not as good as we would like.

The whole world is looking at the members of OPEC + with open mouths. The next meeting of the cartel will take place on Monday. It is possible that behind the scenes pressure from the United States, production will be increased beyond the planned volume. The current formula assumes an increase in production by 400 thousand barrels per day every month. However, given the increased demand, the cartel can meet the needy halfway and open the tap harder. If there is no progress towards increasing production, oil prices will continue to rise.

On the other hand, who would be indignant only not to the Americans, who in one fell swoop print the GDP of Russia on bridges, roads and aid to the people. Expensive oil? Print more money. The world will be patient for a while.

Note that where the money actually goes to the newly printed dollars is a big question, whether the starving in New Orleans after the next hurricane, or to buy shares of companies through pocket banks, the stock market is at its highs, and in the bowels of the Fed there are scandals with layoffs first persons. Congressmen even got to St. Powell.

The ruble is stable. If the screams from Washington about new sanctions on Russian government bonds had died down, it would be very good. With current oil prices and a high interest rate, the ruble exchange rate should be around 60 rubles per dollar, but not 70.

When there are icicles inside the offices in Brussels, and the wait is not long, then Nord Stream 2 will be certified and launched, which will become not only an economic, but also a political victory for Moscow. And this fact will have a positive effect on the ruble exchange rate. We continue to closely monitor the situation.

Over the past week, the difference between long and short positions of managers increased by 3.1 thousand contracts. The speculators were careful. Only data on grain stocks in the US, released on Thursday evening, were able to send the market up. Growth scenario: December futures, expiration date December 14. We will continue to hold long. Note that the market did not reach our stop order of just 0.2 cents.

Falling scenario: we will not sell yet. The market has all the chances to reach 777.0 cents per bushel, moreover, in the future we can rise to the level of 840.0. 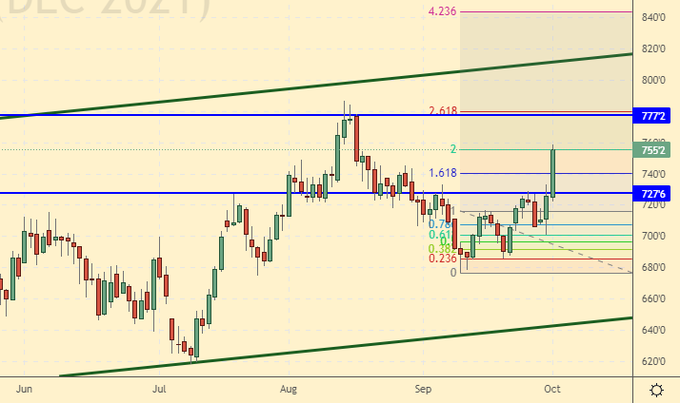 Over the past week, the difference between long and short positions of managers increased by 35.1 thousand contracts. The bulls were furiously buying out corn contracts even before the release of the stock data, preventing the quotes from falling below 510.0 cents a bushel. Level 600.0 is in our field of vision.

Growth scenario: December futures, expiration date December 14. Let’s leave the recommendation of the previous week in case of growth above 558.0 — to buy.

Falling scenario: the market showed a new local maximum. Most likely we will go up. However, the behavior of soybeans, which began to fall in price, is embarrassing. Let’s put a short with little capital risk. 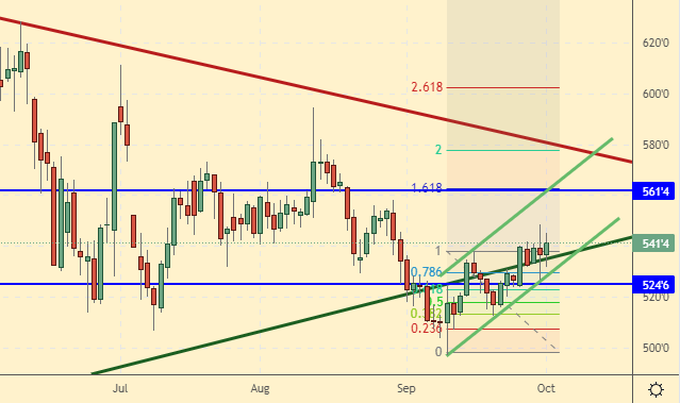 Growth scenario: November futures, expiration date November 12. We continue to refrain from buying, as a downward move is brewing in the market.

Falling scenario: hold the shorts. Our hypothesis about a possible fall is confirmed. Recommendation: 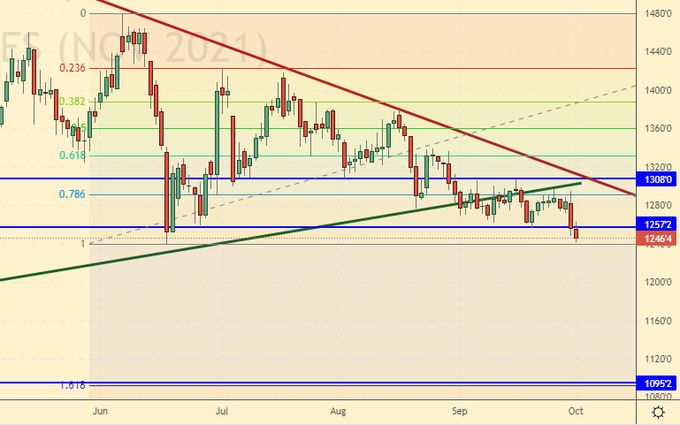 Growth scenario: March futures, the expiration date is February 28. We continue to believe that if we rise above 21.00 it makes sense to buy. The current situation is uncertain.

Falling scenario: sell here. Descent to 18.20 will be our main idea. 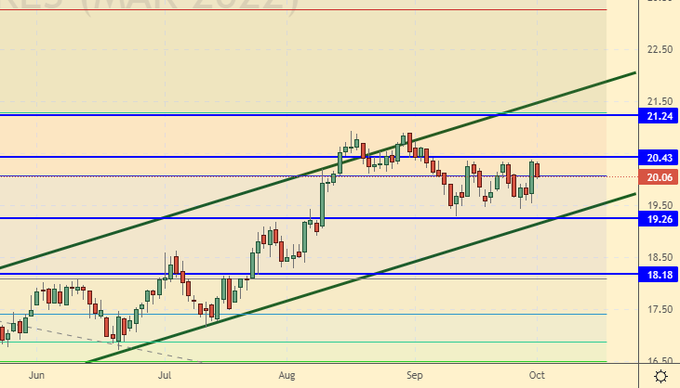 Growth scenario: December futures, the expiration date is December 20. Showed a new local maximum. Here you can add to purchases, we do not open new longs.

Falling scenario: most likely the bulls will be able to raise the market to 244.00. We do not sell. However, it is worth keeping an eye on the 190.00 area, if we go lower, the shorts will make sense. 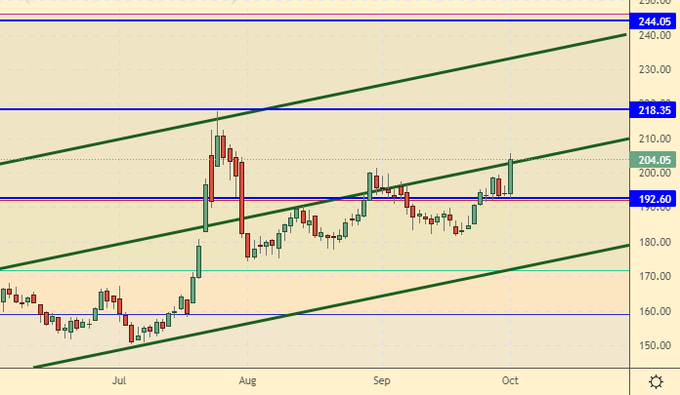 Over the past week, the difference between long and short positions of managers has increased by only 200 contracts. Note that sellers have appeared on the market who expect to break the growing trend.

Growth scenario: October futures, the expiration date is October 29. If OPEC + does not increase production over the plan next week, prices will continue to rise. We continue to hold longs.

Falling scenario: don’t sell yet. Only when approaching 88.00 does it make sense to think about selling. 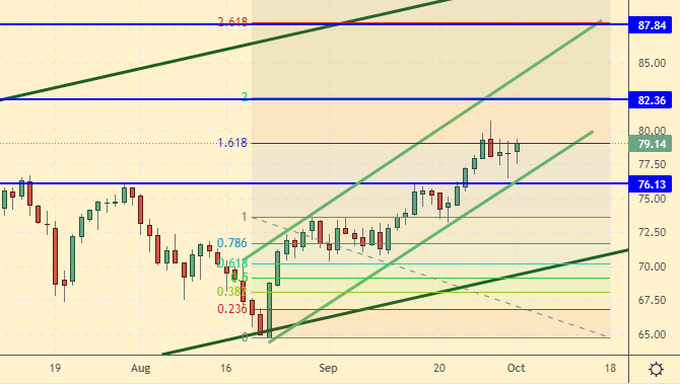 Fundamental US data: the number of active drilling rigs increased by 7 units and is 428 units.

We’re looking at the volume of open interest of WTI. You should keep in your mind that these are data from three days ago (for Tuesday of the past week), they are also the most recent of those published by the ICE.

Over the past week, the difference between long and short positions of managers increased by 12.1 thousand contracts. In contrast to Brent, sellers on WTI behave more modestly. Market participants are in no hurry to open short positions.

Growth scenario: November futures, the expiration date is October 20. The market is very optimistic. We keep the longs opened earlier.

Falling scenario: sellers should sell only when the market approaches 84.00. The current levels are not very interesting for short entry. Note that an increase in production from OPEC + may send prices to 70.00, but we are unlikely to fall below. Recommendation: 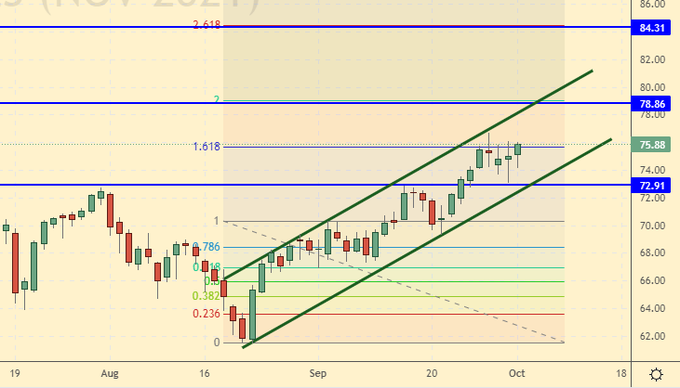 Growth scenario: November futures, expiration date November 11. There is no good place to shop here. Out of the market.

Falling scenario: there are no downward reversal signals at the moment. We take a break. 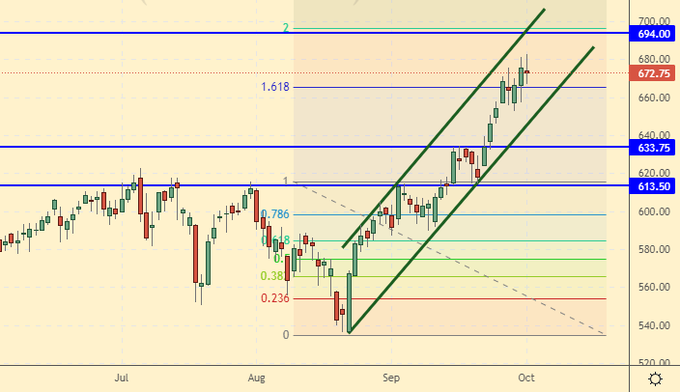 Growth scenario: November futures, the expiration date is October 27. The market has suspended its growth, but the situation has not yet returned to normal. The rollback to 5.000 can be used for purchases.

Falling scenario: we do not enter short. With the current imbalances, we can fly away to 8.777. Recommendation: 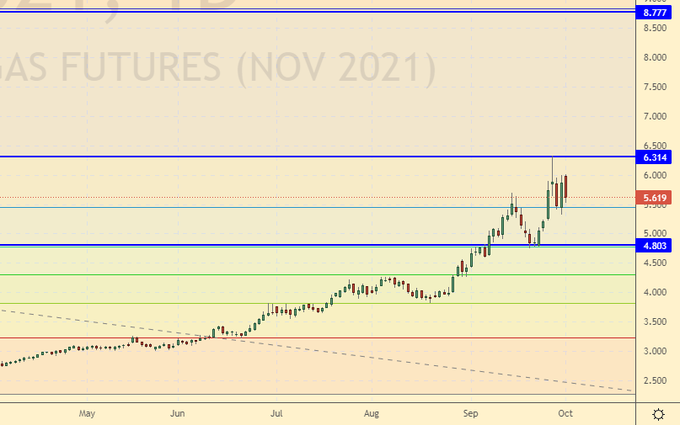 Falling scenario: one more attempt to enter 1720 shouldn’t be ruled out. Here you can add to the previously opened shorts. Do not open new positions. 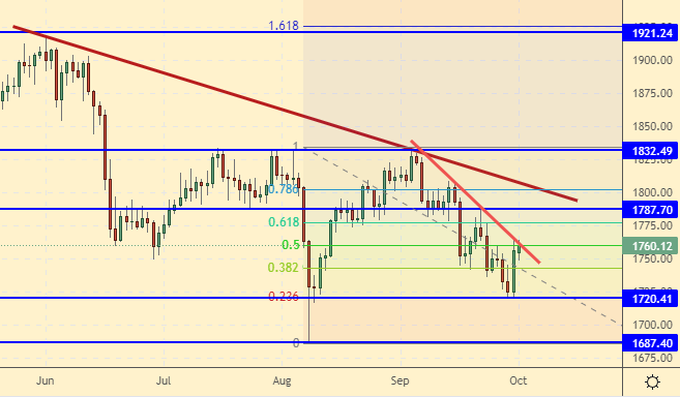 Growth scenario: in the current area, you can buy at «1H» with targets at 1.1670. On the «1D», the situation does not look attractive for entering a long.

Falling scenario: we reached the intermediate target at 1.1550. A rollback to 1.1670 is not excluded, there you can add to the previously opened shorts. 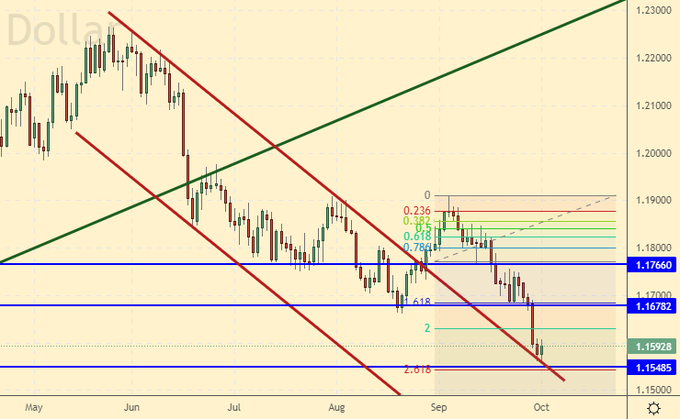 Growth scenario: the situation remains uncertain. If the market rises above 73.50, you can buy.

Falling scenario: we will continue to hold the short opened six weeks ago from 73.90. We do not open new sell positions. 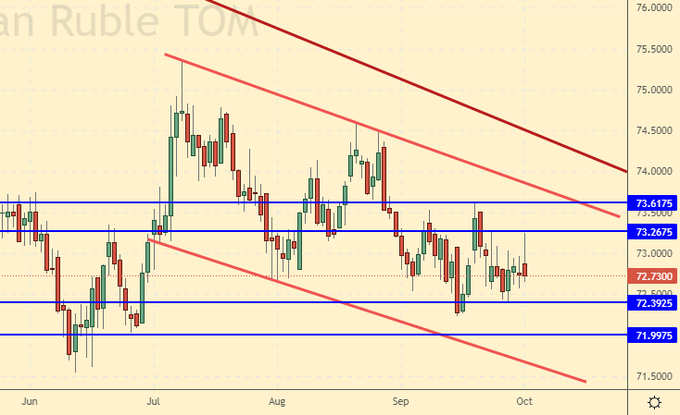 Growth scenario: growing oil stimulates the rise in the Russian stock market. Given that overseas sentiment is beginning to deteriorate due to possible stagflation in 2022, we may also correct, so we are very careful when purchasing. For the daily scale, the situation does not look attractive, we open all longs only on hourly intervals.

Falling scenario: we have a stop for the short opened last week at 178000. The situation is not easy, as after the long red candlestick the fall did not happen. Exit short and enter again after the index falls below 172,000. 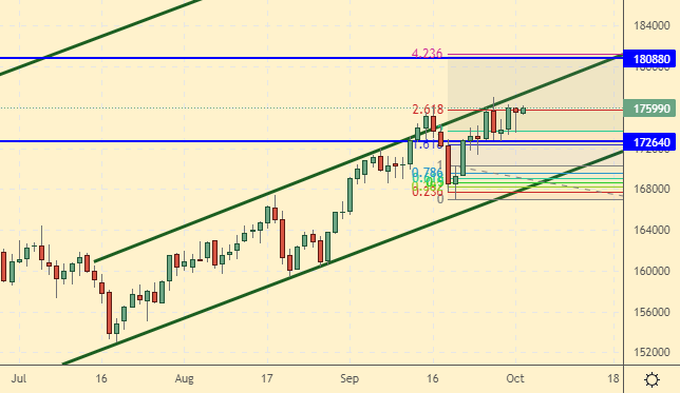