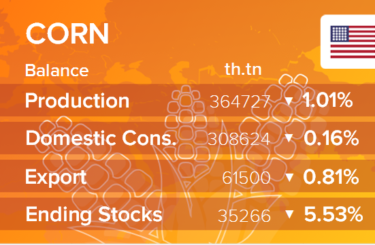 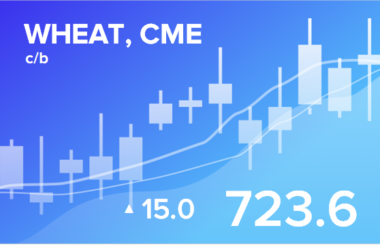 The fairy tale about cheap food does not want to become reality. Prosperity is being postponed all the time even under developed capitalism. Cereal prices are going up again, and this is at a record harvest in the world. If demand remains at a high level, and it will, as rulers around the world are afraid of the pandemic, it is scary to imagine what prices we will see in the event of a cold winter in Europe and Russia, when winter crops begin to freeze. It makes sense to keep a close eye on temperatures this winter.

Europe has harvested one of the worst grape harvests ever due to a disgusting summer. Good wine will not be enough. There will be nothing to calm the nerves. And against such a sad, one might even say not a rosy European background, elections to the Bundestag are being held. Let’s hope that the Germans will use their votes carefully. Following the results of the elections, new members of parliament must elect a new chancellor. Angela Merkel is leaving politics. The coming to power of a person who is too preoccupied with the environment may lead to an increase in the cost of agricultural products in the largest EU economy.

What Europe has done to itself, wishing to demonstrate the strength of its bureaucracy, first of all to the Kremlin, with its energy packages, laws and courts, cannot be called any decent word. Either we allow you to lay the pipe, then we do not.

Everything turned into a fourfold increase in the cost of natural gas in Europe on the eve of winter due to a drop in reserves in storage facilities. There were 200, now 800 dollars per thousand cubic meters. Yes, and who knew this spring and this summer that Asia would contract LNG at any price, taking almost everything from the market. Nobody except Alexey Miller.

The «greens» will now be quickly shoved into a wooden box and sprinkled with earth, the coal stations will be reactivated, and the sky will be smoked forward. They will even send their German, possibly British, Stakhanov to us in Kuzbass, if only coal is given to the top.

And most of all the king of Norway is happy. They are there out of happiness for their five million citizens will soon light up their personal sun, so that it would be easier to endure the dark winter, and what else to do with their money.

Iran again began to run around the table from the Americans not wanting to sign the papers on the nuclear deal. The Washingtonians are publicly complaining, urging the public to witness the fact that the negotiation process has been dragging out. And expensive oil is to blame. China, apparently, pours good enough for Tehran under direct contracts, so the Persians now have no need to rush.

Drilling activity is on the rise in America. The number of active drilling rigs reached 421. At the beginning of the year, there were only 240 working devices. The path is not close to the average for the last five years in the amount of 800 installs, but active growth, 10 installs in seven days, is going on for the second week in a row.

The ruble is still stable. The Americans are threatening with new sanctions. The question of a ban on the purchase of the secondary state debt of the Russian Federation has been raised. With high energy prices, the ruble is unlikely to experience problems. Another thing is that with a rollback in the oil and gas markets, anxiety about the state’s ability to cope with current challenges will intensify and the ruble will begin to weaken.

Note that Washington has more and more room for maneuver, since diplomatic contacts between Russia and America are practically frozen. If earlier it was possible to sit down at the table and discuss the accumulated questions, now it is impossible to do this. The FRS meeting on the 22nd gave an extremely weak reason for the dollar bulls to continue buying. If the American currency improves its position, it will not be for long. There remain many questions about inflation, the labor market, and the growth of US GDP, the forecast for which was reduced from 7.0 to 5.9%.

Over the past week, the difference between long and short positions of managers decreased by 0.3 thousand contracts. We see that speculators have temporarily lost interest in the market. Traders closed both buy and sell positions. In fact, in the thinner market that became after the departure of speculators, the price increased.

Growth scenario: December futures, expiration date December 14. Not a bad situation to keep the long open after rising above 715.0. The current levels are also good for buying, although they are not optimal.

Fall scenario: there is a possibility that we will go to the area of 780.0. We do not sell. 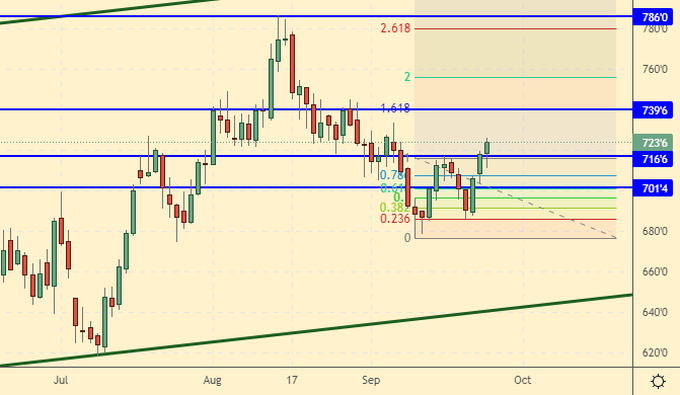 Over the past week, the difference between long and short positions of managers increased by 2.2 thousand contracts. The changes are not significant. Traders are out of ideas at the moment.

Growth scenario: December futures, the expiration date is December 14. Market uncertainty is dragging on. Let’s keep last week’s recommendation: if prices rise above 558.0, we will buy. The second option for buying is a drop in prices to 430.0.

Falling scenario: since nothing has changed, we continue to hold the short from 584.0. Much corn was harvested. Possible downward movement.

Purchase: think after rising above 558.0. 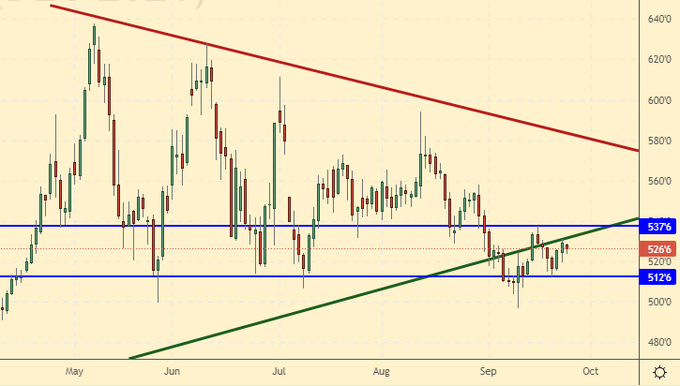 Growth scenario: considering November futures, expiration date November 12. We came out of consolidation down. Some cooling is ready. We do not open new buy positions.

Falling scenario: keep holding the shorts. Those interested can add at the current price levels. 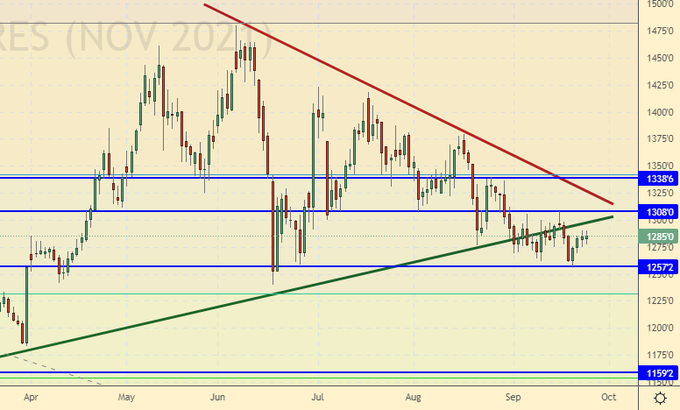 Growth scenario: March futures, the expiration date is February 28. If we rise above 21.00, it makes sense to buy. The current situation is in favor of sellers. Falling scenario: we designated the level of 20.40 as resistance. Let’s go in short. 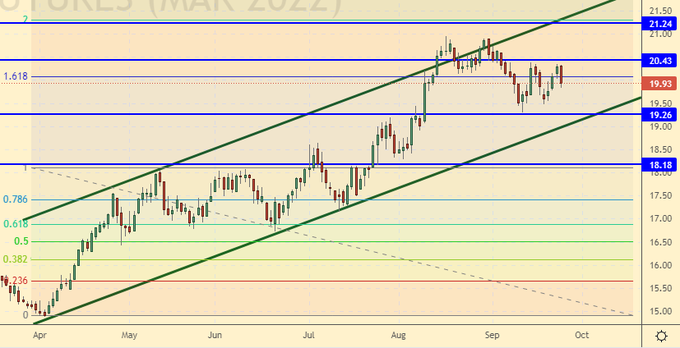 Growth scenario: December futures, the expiration date is December 20. Rise above 190.00 again, you can buy.

Falling scenario: most likely the bulls will be able to raise the market to 244.0. We do not sell. 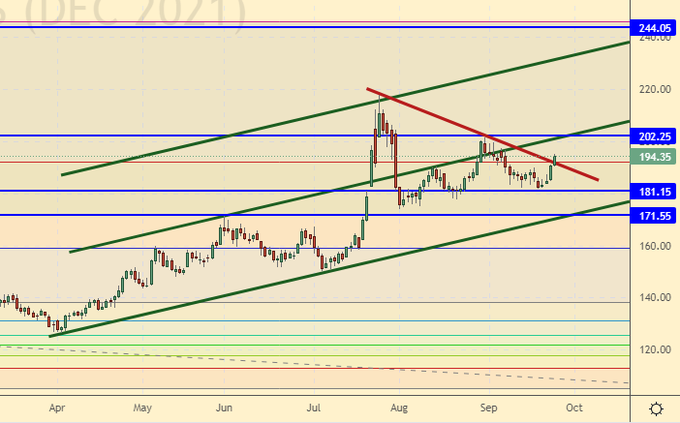 We’re looking at the volume of open interest of Brent. You should keep in your mind that these are data from three days ago (for Tuesday of the past week), they are also the most recent of those published by the ICE exchange.

Over the past week, the difference between long and short positions of managers increased by 21.8 thousand contracts. Bulls were actively entering the market, sellers, on the contrary, retreated, which led to an increase in prices.

Growth scenario: October futures, the expiration date is October 29. The outlook for the oil market remains good due to high gas prices. Up to 1 million barrels per day will be burned this winter if Europe does not get enough natural gas from Russia and Norway. Let’s move the target from 80.00 to 88.00.

Falling scenario: do not sell. Strong energy demand and a weak dollar leave no room for a fall. Only when approaching 88.00 can you think about selling. 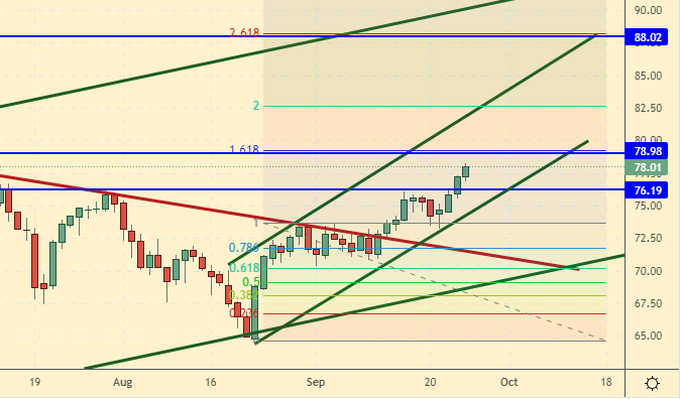 Fundamental data from the USA: the number of active drilling rigs increased by 10 units and is 421 units.

We’re looking at the volume of open interest of WTI. You should keep in your mind that these are data from three days ago (for Tuesday of the past week), they are also the most recent of those published by the ICE exchange.

Over the past week, the difference between long and short positions of managers decreased by 12.4 thousand contracts. Some of the bulls did not believe in the continuation of the growth and a bet was made to sell, however, prices continued to rise, which led to the disruption of stop orders and a sharp rise in the market.

Growth scenario: November futures, the expiration date is October 20. Considering the proximity of the resistance level at 75.56, there is no point in buying now. Who bought after rising above 73.00 — keep long with targets at 84.00.

Falling scenario: sellers should stay on the sidelines for now. It is possible that the market will pick up speed and continue to grow rapidly. Recommendation: 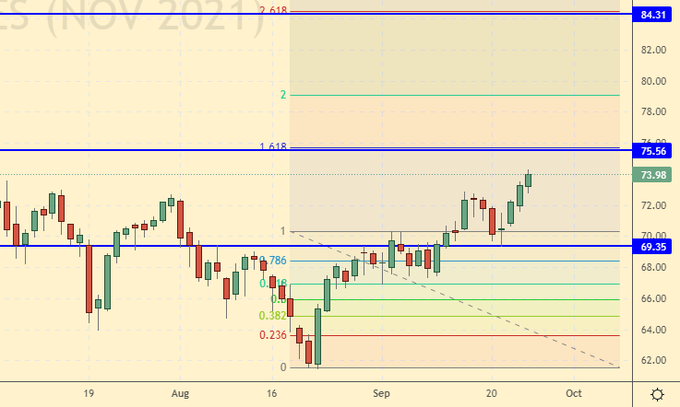 Growth scenario: October futures, the expiration date is October 12. It is possible that the market will roll back from the level of 667.0. If this happens, then shopping opportunities can be considered. Out of the market so far. 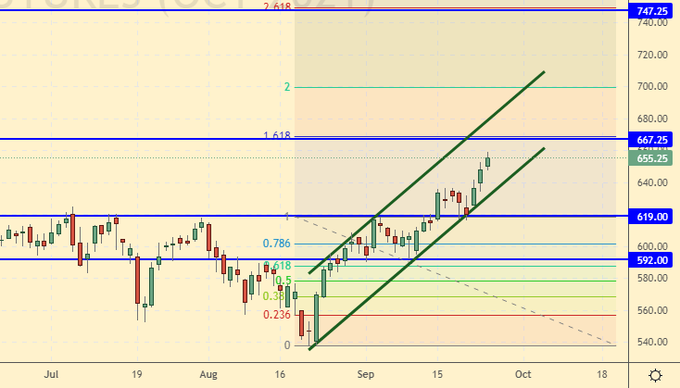 Growth scenario: October futures, expiration date September 28. The gas market in Europe continues to remain at high, one might even say exorbitant levels. Buying now is extremely uncomfortable. For now, we will count on the normalization of the situation and a rollback to 4.220.

Falling scenario: selling here is extremely difficult, knowing that storage facilities in Europe are about a third full before winter starts. We do not enter the short.

Growth scenario: sellers cannot break below 1730 yet. Buy here, as the risk is small. The FRS meeting on the 22nd only intensified rumors about the strength of the dollar in the distant future, but it never came to concrete cases, in the form of curtailing the quantitative easing program.

Falling scenario: sellers will find it very difficult to push gold to 1650. We do not open new shorts. 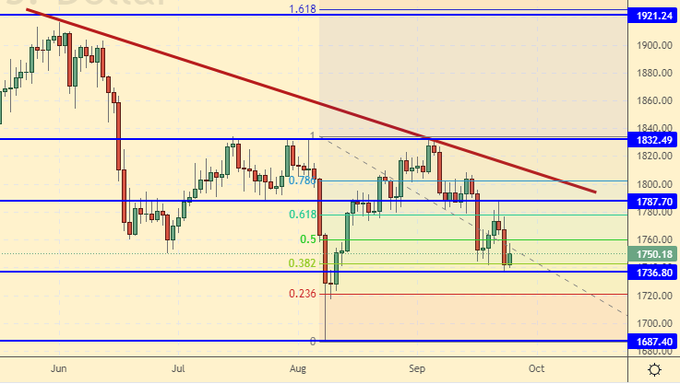 Growth scenario: the euro has a chance. Let’s look at the results of the elections to the Bundestag next week. Then the elections of the chancellor will follow. And a new leader always means new hopes. From a technical point of view, the bulls are also not lost.

Falling scenario: the Fed meeting failed to give impetus to the fall. We do not open new sell positions. 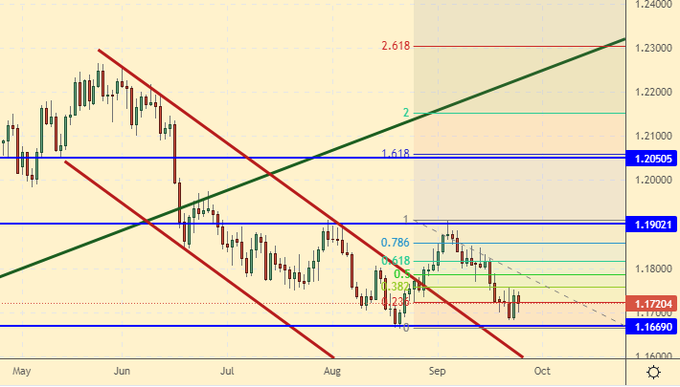 Growth scenario: the situation is uncertain. If the market rises above 73.50 again, you can buy. Anyone in position from 73.00, keep longs.

Falling scenario: we will continue to hold the short opened five weeks ago from 73.90. We do not open new sell positions. 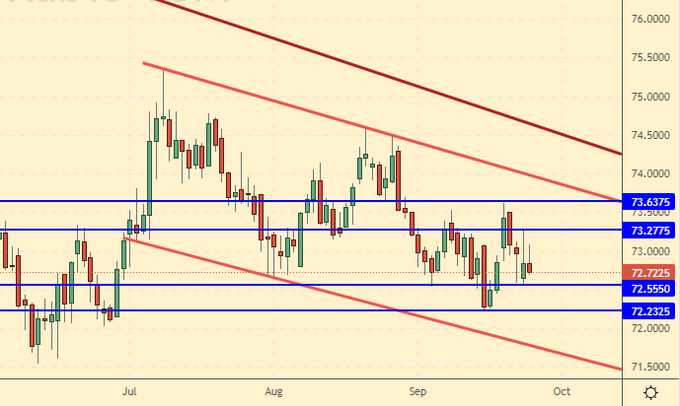 Growth scenario: expensive energy supplies support the Russian stock market. The external background also remains positive despite the forecasts for the reduction of the quantitative easing program and the strengthening of the dollar. We leave out new possible US sanctions for now, although in the long term they may affect the Russian economy. If the market goes above 178,000 you can buy.

Falling scenario: short from current levels is interesting primarily from a technical point of view. Let’s go on sale. Investor sentiment may change over the weekend. Suddenly from Monday everyone will start to believe in a strong dollar, then the stock market will have to correct. These are the rules of the game. 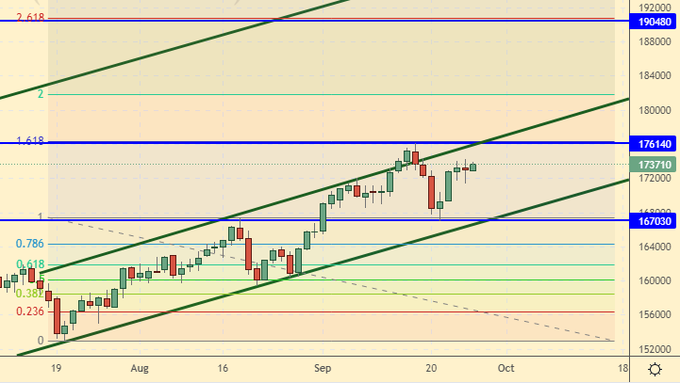