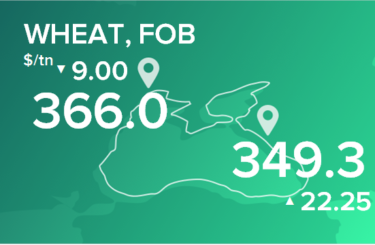 The flooding in China could have a significant impact on cereal prices. The emergency scale is enormous, 2 million people have been evacuated. It’s not clear how much crops and warehouses were affected. But the Celestial Empire has already purchased 1.7 million tons of corn from the United States. It is possible that we will see the demand for supplies of other types of food from Beijing.

The market is in a bullish trend typical for the current season, which should fizzle out in two to three weeks. After that prices will decline. This established order of things can be disturbed by weather deterioration at the moment of the crop harvesting. If cataclysms become widespread, we may not see a drop in prices in the second half of August.

We note constantly worsening forecasts for the wheat harvest in Europe. France now is the «chief» here, the spring forecast has been reduced from 39 to 30 million tons. A drop in the harvest is predicted in Bulgaria and Romania. Ukrainian and Russian grain will be in good demand this season.

The OPEC + agreement about increasing production did not have a significant impact on prices, since the real supply in August will grow by only 1 million barrels per day. The cartel indicated in the report that it expects a growth of demand in 2021 from 90 to 96 million barrels per day, which supports the market. Note that, such scenario will possible if the pandemic problems are eliminated.

The current downturn in US drilling activity and the lack of capital investment in the energy sector this year and next will certainly lead to a decline in production.

If OPEC will not very zealous with increasing its own market share, but rather monitors the price, then we may expect prices to return to the level of $ 70.00 per barrel and above in the future.

Our worries about the second quarter trade balance were well founded. The net balance of $ 14.7 billion was spent on paying interest on current debts, plus the simple outflow of capital for modern Russia. As a result, in three months the net inflow into the country amounted to only $ 600 million. Since imports do not want to fall and remain above $ 50 billion per quarter, we will face a currency deficit.

The central bank is unlikely to continue firing reserves in the current environment. Even if oil prices go down, counting on various budgetary rules that regulate the sale of foreign currency is not worth it, since stocks have a limit, or rather a bottom. Russia cannot take and print 6 trillion. dollars in 6 months, as Washington did. Thus, if Brent does not go to the level of $ 50.00 per barrel, the pair’s ascent to the level of 75.00 rubles per dollar will accelerate.

Very bright mood swings. Sellers are running under the pressure of buyers. The rollback of Thursday and Friday is unlikely to cool the flame of the bulls. So far, we are inclined to continue to build up the influence of supporters of long positions.

Growth scenario: September futures, expiration date September 14. We got a move from 490.0 to 545.0. Now we are waiting for a rollback to 518.0 where you can buy again. Those who don’t want to wait can start buying from the current levels gradually. Bulls still have time until mid-August, move to 590.0 is possible.

Falling scenario: think about shorts only when the market approaches 590.0. The world’s situation isn’t easy. Importers will prefer to build up stocks; exporters will probably hold back the grain.

The retreat of sellers two weeks earlier gave the bulls with the space to maneuver. In the market, we see the beginning of the price pressure upward, as the critical support level 320.0 held out.

Growth scenario: September futures, expiration date September 14. It is good that the market did not touch the 320.0 level. We have a stop order there. The one who entered the purchase — hold positions. It is very likely that despite the gigantic harvest, we will see the 375.0 level.

Falling scenario: from knowledge of the levels are historically low, it is morally difficult to sell here. We don’t enter the short.

Falling scenario: nothing has changed in our perception of the situation. We will patiently wait for the arrival of prices at 950.0 in order to enter the sale there.

Growth scenario: October futures, the expiration date is September 30. There is uncertainty in the market. We need either a rise above 12.10 or a fall below 11.30. Thus while we gain patience and wait.

Falling scenario: continue to hold the previously opened shorts. In case of falling below 11.30, you can add.

Growth scenario: September futures, expiration date September 18. Those who wish bought from 97.00 last week. We will keep long here with a preliminary target of 125.00. The market drew us an impulse and a correction to it, we will count on continued growth.

Falling scenario: there is a certain temptation to sell here, but it is better to do it at the 1H intervals when signals of a downward reversal appear.

Buyers have appeared, apparently against the backdrop of OPEC forecasts for an increase of oil demand. Note that if the market rises from the current levels by 3-5 percent, then they may be right. In a calmer situation, a pullback awaits us, this is confirmed by a modest increase in the number of short positions for the second week in a row.

Growth scenario: July futures, expiration date July 31. A break above 45.00 could lead to a rally to 53.00. On a daily interval, such scenario is inconvenient to work out, but pay attention to it on 1H intervals.

Falling scenario: the market is unlikely to be able to raise its head after falling below 42.50. In this case, a rollback to the 32.00 area will await us, and buyers will meet the market there.

Purchase: possible at the 1H intervals after the growth above 45.00.

Fundamental: the number of oil drilling rigs in the United States fell by 1 unit to 180 units.

Note that speculators are inactive. It’s possible that the «treasure hunters» will show signs of life when the technical picture will clarify.

Growth scenario: September futures, expiration date August 20. Unproductive attempts by the bulls to push the market up could lead to the fact that one day a fund will bet on the fall and we will quickly find ourselves at 35.00. Buyers are running out of time.

Falling scenario: there is no reason yet for us to abandon the idea of the market falling to the level of 30.00. The buyers cannot show us anything significant. Here you can search for short entry points.

Growth scenario: August futures, the expiration date is August 12. If the bulls don’t come up with anything, then prices will fall out of the growing channel, which will lead to a pullback. Here you can buy on 1H intervals with a tight stop order.

Falling scenario: if the market falls below 353.0, it will be possible to sell. Wait for conclusion Monday or Tuesday.

Growth scenario: August futures, the expiration date is July 29. The market has been reaping an intensive development of LNG projects over the past 5-7 years. In addition to Russia and the United States, there are also Qatar and Australia, and everyone wants to sell their liquefied gas. It would be possible to bet on a cold winter, but let’s wait. The resistance line is close. Let’s wait for its breakdown.

Falling scenario: short is possible here at 1H intervals. We will not do anything at 1D timeframe.

Growth scenario: we see that prices remain in the growing channel. Just play it cool. Continue to hold longs. Those who interested can buy. The stop order can be placed at 1787, which is convenient.

Falling scenario: in this situation, if the market falls below 1780, there will be a temptation to enter the short. The more interesting sales level is obviously 1920.

Growth scenario: The Europeans decided they needed 750 billion euros to support the economy. Partly it will be a loan, partly countries will receive gratuitous aid.

It’s nice to see that the market thinks the same way we do. However, all the opportunities for a good buy have already been exhausted, we will keep the positions opened earlier. Our goal is 1.1950.

Falling scenario: let’s refrain from selling for now. We wait for the move to 1.1950 and analyze the incoming information. The main intrigue of the summer: will the Fed cut the rate to zero on July 29.

Growth scenario: foreign exchange deficit within the country will put pressure on the market. We look forward to growth to 74.50. Judging by the nature of the market growth in the second half of last week: three green candles in a row, bulls have nothing to fear.

Falling scenario: it is not clear how sellers can impose a fight. We’ll postpone the discussion of shorts for now. If the market doesn’t turn down from the current levels, then there is a suspicion that it will be scary to sell the pair from both 74.50 and 78.70, since the growth can be unidirectional.

Growth scenario: since the ruble is losing ground against the dollar, weak growth in Russian stocks is not able to lead to an upward reversal of the RTS index. The decline in the cost of hydrocarbons has already turned into a fall in the profits of large corporations, which can harm not only themselves, but also the banking sector. It’s not yet clear how we can grow. We don’t expect dividend payments next year. Don’t buy.

Falling scenario: if the index falls below 1170, the market will quickly move to 1100, then move to 1000 will follow. We continue to recommend selling from current levels.