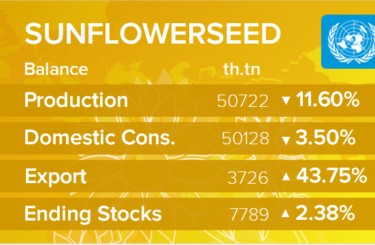 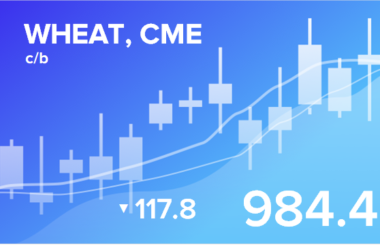 It is not yet a fact that food supplies to Europe from Ukraine and Russia will be disrupted this autumn, but such a fear exists, and a shortage in a number of positions is real. EU citizens are trying to stock up on flour and sunflower oil for future use, which creates a stir when the shelves are empty.

This week, the hope for the end of the conflict in Ukraine did not come true, prices went down, then quickly recovered. At the moment, we see that against the backdrop of the sowing campaign, prices on the Chicago Stock Exchange for wheat and corn are prone to falling. We believe that there will be no deep correction, however, a 10% rollback from current levels is real.

The forecast for wheat yields in Europe for mid-March is at the level of last year’s excellent and is 58 centners per hectare. In addition, additional lands will be plowed up, which will provide a small increase in the gross harvest.

US farmers are switching from corn to soybeans because soybeans do not require a lot of fertilizer. As a result, soybean prices could correct by 15% to 1,300 cents per bushel.

Don Pedro will not go to rest this weekend from his castle on the coast — it’s too cold. And the German von Bobock will not be able to drive to the Alps, there are 30 centimeters of snow on the roads. Europe is cold again. Again, you have to pay for gas, gasoline, coal. We need to look for rubles.

OPEC+ is sticking to the plan so far. An increase in production by 400 thousand barrels per day is planned for May. Moscow would hate to see its market share replaced by other countries, but this can happen even if Saudi Arabia plays for the Kremlin in the oil field.

American Democrats will save their ratings, not only will 1 million barrels of oil per day be supplied to the market from reserves for 6 months, but also a set of cookies will be prepared for the Venezuelan government. Heavy oil from comrade Maduro interests Biden very much. If it does not exist, then a part of the inhabitants of the United States, whose lives matter, may rudely knock on the door of the White House and ask:

— «What’s with the gasoline prices, bro?»

In addition to Venezuela, other, not so significant, but significant players in the oil market can increase their supply: Kazakhstan and Azerbaijan, for example. And if the West finally strangles in its arms Iran, which is now so beloved and needed by everyone, and allows it to sell oil not only to China, then prices may go down to the region of $80 per barrel.

There is no normal dollar trading on the MICEX. Non-residents are not allowed to trade. The current exchange rate of the dollar against the ruble is artificial. A cash dollar is quoted from 140 to 160 rubles, which is more than 1.5 times higher than the exchange rate.

The West cut off economic ties with Moscow for more than one month. Now it makes no sense to talk about an early normalization of the situation, since there are many unknowns in the equation. Until the situation normalizes, we consider the exchange rate to be indicative.

Most likely, the US dollar will continue to strengthen against other currencies this year on the back of forecasts for a multiple rate hike by the US Federal Reserve. It seems interesting that at the moment gold is in no hurry to fall against the US currency, and without strengthening against gold, the strengthening of the dollar will be perceived as a far-fetched thing. Note that the fiat currency market is rapidly beginning to resemble the crypto market, as it loses its fundamental content. The printing of money does not stop.

Over the past week, the difference between long and short positions of managers has decreased by 3,000 contracts. Most likely, the bulls will retreat against the backdrop of a favorable spring. We do not expect a strong fall, but we will clearly see a rollback.

Growth scenario: we are considering the May futures, the expiration date is May 13. While we do not buy, we wait for lower price levels.

Falling scenario: We will keep the shorts open last week. It is possible that we will reach not only the level of 900.0, but also 800.0. 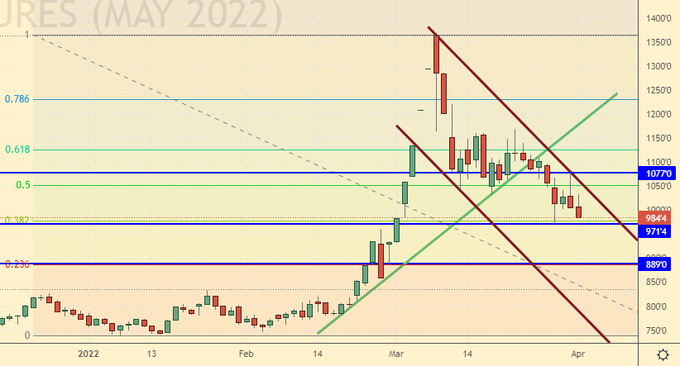 Last week the difference between long and short positions of managers decreased by 30.3 thousand contracts. The positions of the bulls were shaken. It is possible that we will see the flight of buyers next week.

Growth scenario: we are considering the May futures, the expiration date is May 13. Shopping here is not comfortable. We take a break.

Falling scenario: we will sell. The market is able to pass to 650.0, a stronger fall is not in sight. Recommendation: 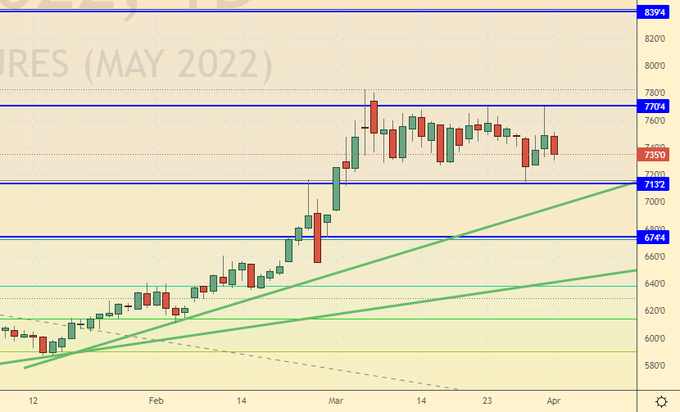 Growth scenario: we are considering the May futures, the expiration date is May 13. The market decided to go down. Refrain from shopping.

Falling scenario: you can go short. The levels are somewhat understated, but given the prospect of a move to 1300.0, the deal looks good. Recommendation: 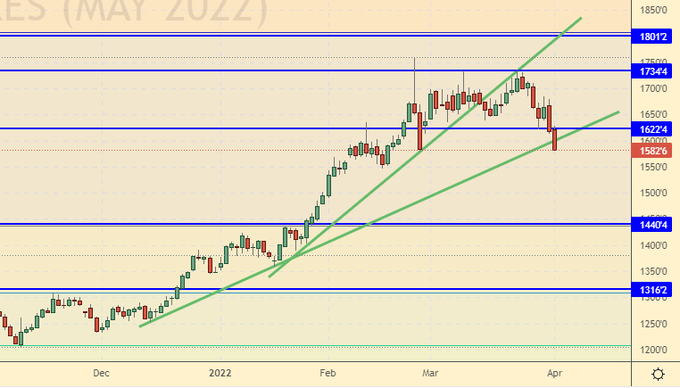 Growth scenario: we are considering the May futures, the expiration date is April 29. It is possible to enter long again despite the demolition of the stop order. 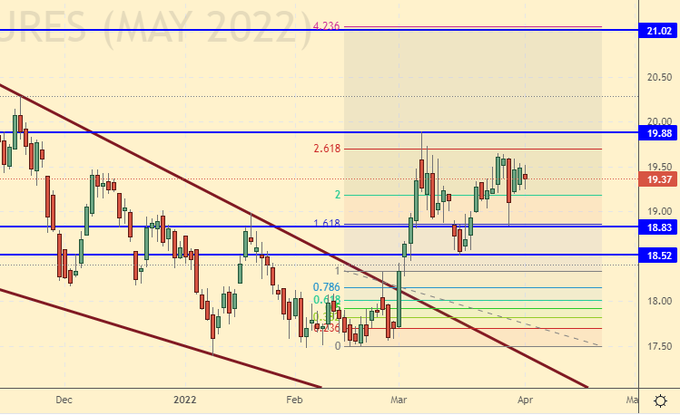 Growth scenario: we are considering the May futures, the expiration date is May 18. Coffee behaves extremely suspiciously. Let’s buy.

Falling scenario: nothing has changed. Short will continue to hold. When approaching 200.0 you can take profit. 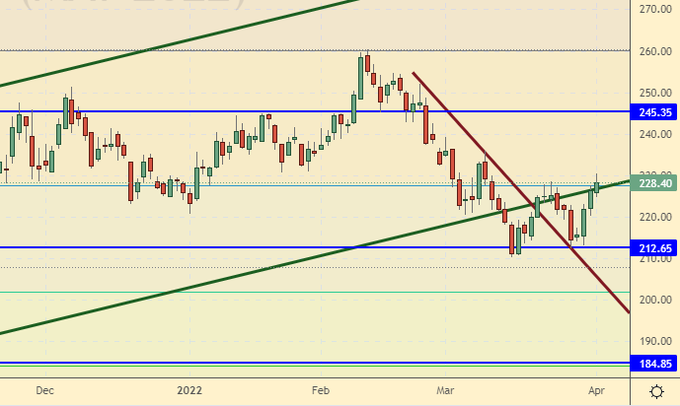 Over the past week, the difference between long and short positions of managers decreased by 5.1 thousand contracts. The change is minor. The number of buyers in the market exceeds the number of sellers by 142,000 contracts.

Growth scenario: we are considering the April futures, the expiration date is April 29. As long as Russia has not asked to pay for oil in rubles, the market has a chance for a correction towards 90.00.

Falling scenario: sales are possible. The Biden administration will try to lower prices. In addition, there may not be any growth in global GDP this year. 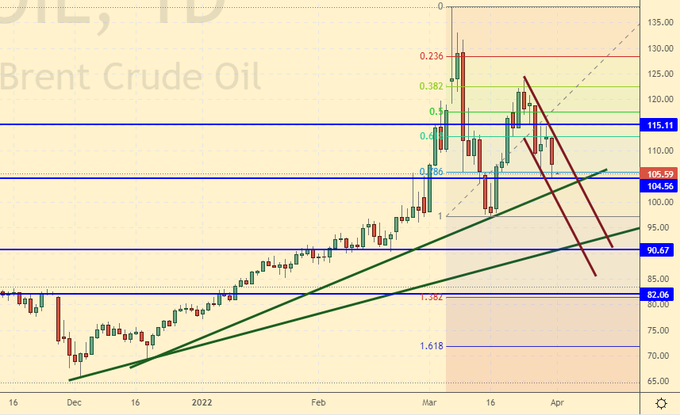 Fundamental US data: the number of active drilling rigs increased by 2 units and now stands at 533 units.

Over the past week, the difference between long and short positions of managers has slightly decreased, by only 4.6 thousand contracts. Traders were waiting for the OPEC meeting and did not take active steps.

Growth scenario: we are considering the May futures, the expiration date is April 20. Until we buy. It makes sense to wait for the fall to the 80.00 area.

Falling scenario: we will keep the shorts opened a week earlier. We do not open new positions. Recommendation: 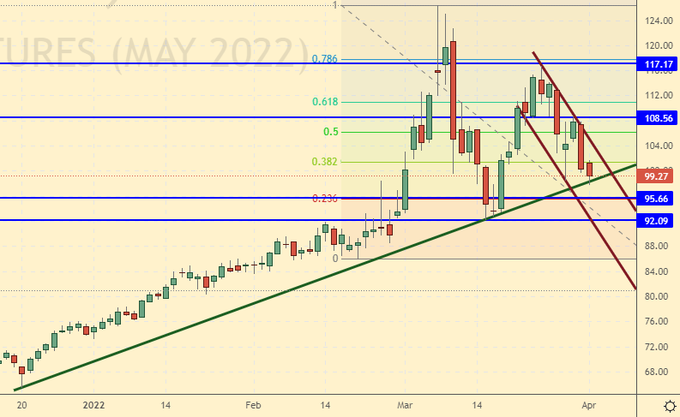 Growth scenario: we are considering the April futures, the expiration date is April 12. Due to the actions of OPEC and the US to increase supply, prices may decrease, do not buy.

Falling scenario: it is worth holding the previously open shorts in the expectation of a fall to the 700.00 area. 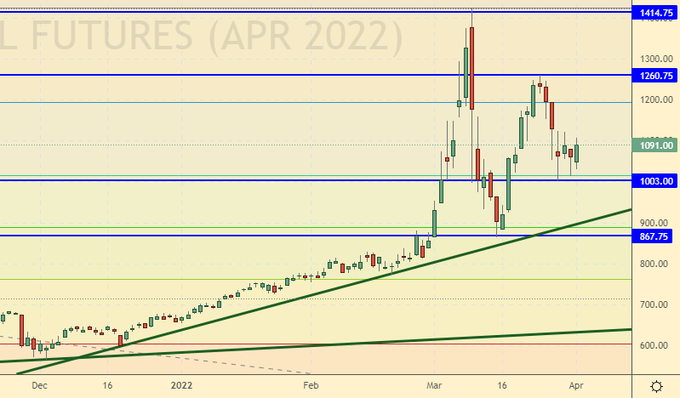 Growth scenario: we are considering the May futures, the expiration date is April 27. The Americans intend to take patronage over Europe in the field of natural gas. They will liquefy it and carry it to the EU. Market demand will remain high.

Falling scenario: we will not sell. Most likely in the USA, and in the EU for sure, new giant gas storage facilities will be built. There will be no surplus in this market. 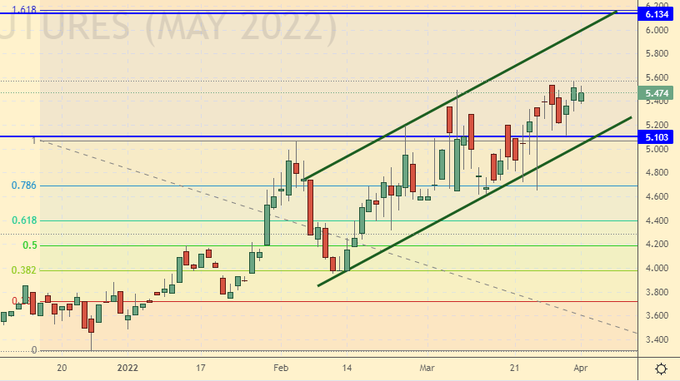 Growth scenario: we see the struggle. You can return to buying if the day closes above 2000.0 or after a rollback to 1850.

Falling scenario: here you can sell. Like a week earlier, the picture is attractive for entering shorts. Recommendations: 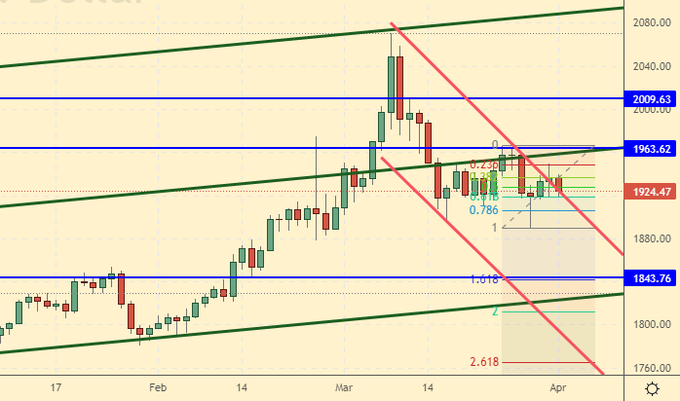 Falling scenario: despite the failure of the stop order, we sell again. 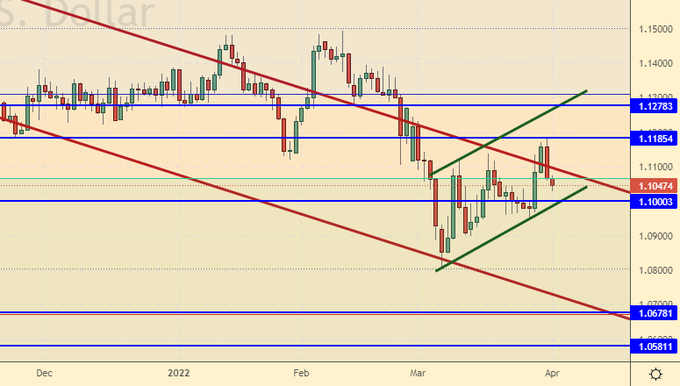 Growth scenario: after the repayment of interest on loans to foreign investors on Monday, the pair’s growth is possible already on Tuesday.

Falling scenario: we perceive the current level as somewhat underestimated for sales. While out of the market. After returning to the 100.00 area, you will need to re-evaluate the situation. Recommendations: 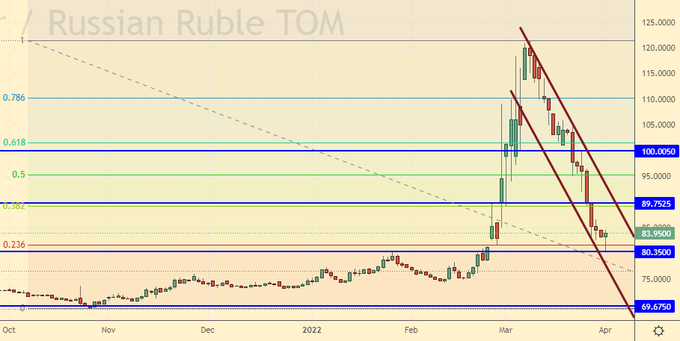 Growth scenario: some of the securities are in demand from investors, but Sberbank and Gazprom do not shine. The situation is extremely tense, as long as there is no understanding of how and to what extent companies will generate profits. It is difficult to push quotes up without realizing this.

Falling scenario: we perceive the current levels as extremely optimistic. The option of normalizing the situation is not ruled out, but this will not happen tomorrow. While there is no political and macroeconomic stability, it is impossible to talk about the growth of the stock market. Recommendations: 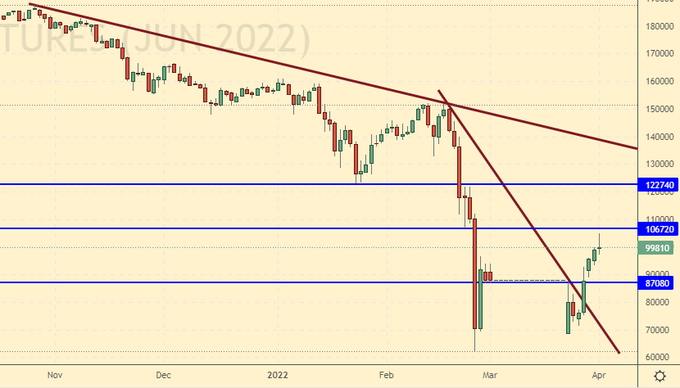