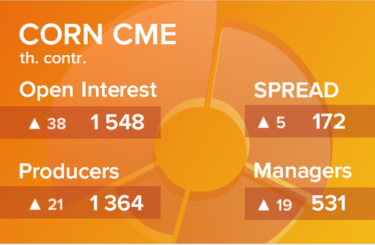 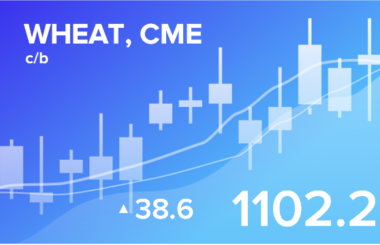 Judging by the fact that fights for sunflower oil are becoming commonplace not only in Turkey, but also in France, the owners of oil and fat plants will become the new kings of the world. They will have the owners of toilet paper factories as viziers. It will need more than ever.

Europe may get nothing from Russia and Ukraine this year. If the EU has no problems with wheat and in general everyone will be with a crust of bread, then things will be much worse with feed and fertilizers. Feed grain will be scarce, which means that the price of meat will rise.

Food from Russia will be supplied this year on a leftover basis. Given the seriousness of the current situation, food security will be put at the forefront. In the near future, we will see the emergence of domestic pricing centers, primarily in Moscow, and secondly in the south, and the quotes of the American and French stock exchanges will serve as a guideline for Russian entrepreneurs who will be able to obtain export quotas when concluding international contracts. Find our statistics, reviews and forecasts here.

On Friday, April 1, we are waiting for a holiday so beloved in the West — April Fool’s Day, and on March 31, we are waiting for the OPEC meeting. Suddenly, on it, in honor of the holiday, a decision will not be made on a further increase in supply on the oil market. The accusations of the prince of Saudi Arabia in the murder of a journalist must be paid. Now is a very opportune moment.

The EU is looking for a way out. Many officials there are already trying to lose their temper, trying to figure out where they can get oil and where they can get gas. Qatar expressed condolences to the European capitals and said that it could not bring them a lot of natural gas right tomorrow, since it must first be produced, then compressed, and then squeezed somewhere else, and it takes two years, no less, to prepare the infrastructure.

The alternative to Qatari supplies is simply terrible: you have to buy gas for rubles. That is, this is not just dependence on Moscow, it is also a protocol humiliation, they say, the holy euros now have to be forcibly sold in order to get rubles. However, Moldova knows where to get rubles, Bulgaria too, it is possible that they will find out in Berlin. Regardless of whether Europe agrees to buy gas for rubles or not, a second action on the part of the Kremlin may follow: it will have to buy oil for rubles as well. In this scenario, gas station prices in the EU will go to Mars without the help of Elon Musk.

It should be noted that life would be much easier for Europeans if there were not 800 million, but only 400. Then there would be enough for everyone.

The situation on the dollar/ruble pair is largely artificial. Without the possibility of the full participation of foreign traders in the work of the exchange, we get not a course, but a vision of the situation by the Central Bank.

So far, the deep people have not felt the need for cash, since there is still a month and a half before the holiday season, but closer to summer, citizens will want either their cash or the opportunity to carry dollars on a card. And the course will be wanted on the street at the money changers exactly the same as on the stock exchange, and not 50% worse. If there are no relaxations in the currency field, the people will be upset. The Kremlin too. Then the Americans will have to buy uranium for rubles.

There is no doubt that imports to the country will be reduced in the coming months, which should help maintain a positive trade balance. The further fate of the ruble will largely depend on how much the Russian economy will depend on goods from abroad. A negative trade balance will have an extremely negative impact on the Russian currency. The picture will clear up in a few months. As usual by August.

Over the past week, the difference between long and short positions of managers has decreased by 2.3 thousand contracts. There is a small influx of sellers to the exchange. We do not deny the possibility of a small rollback.

Growth scenario: we are considering the May futures, the expiration date is May 13. Let’s go back to buying in case of growth above 1150.0. Who is already in position, keep longs.

Falling scenario: short is possible, but with a close stop order. The sowing campaign should help the bears cool down the market a bit. 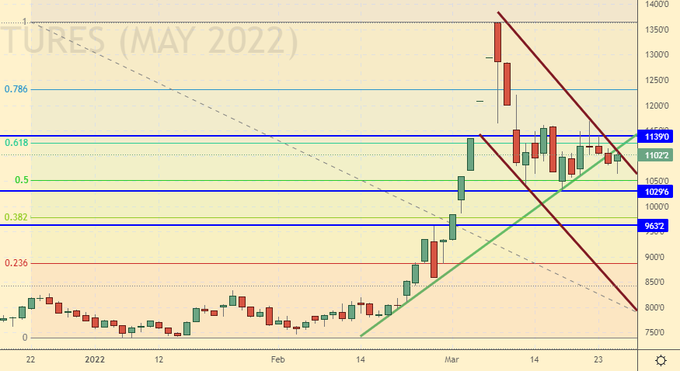 Last week the difference between long and short positions of managers increased by 10.7 thousand contracts. The bulls keep coming to the market. The crowd sees no reason to sell.

Growth scenario: we are considering the May futures, the expiration date is May 13. Let’s continue to hold longs. Our target is at 838.0. Europe will clearly receive less fodder this season. Falling scenario: in case of a fall below 718.00, a short is possible. Below 600.0 the market is not visible.

Growth scenario: we are considering the May futures, the expiration date is May 13. We will keep previously open longs, we do not open new positions. Oilseeds, like grains, will be in price this year.

Falling scenario: we may correct slightly from current levels. But a downward trend is impossible. 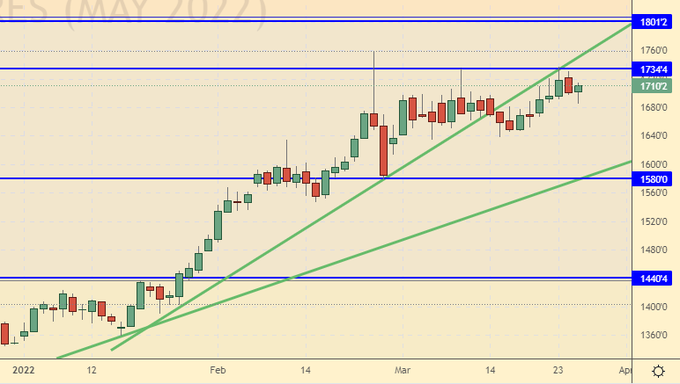 Growth scenario: we are considering the May futures, the expiration date is April 29. We continue to hold long. By 21.00 should come.

Falling scenario: do not sell. The situation is far from normal. 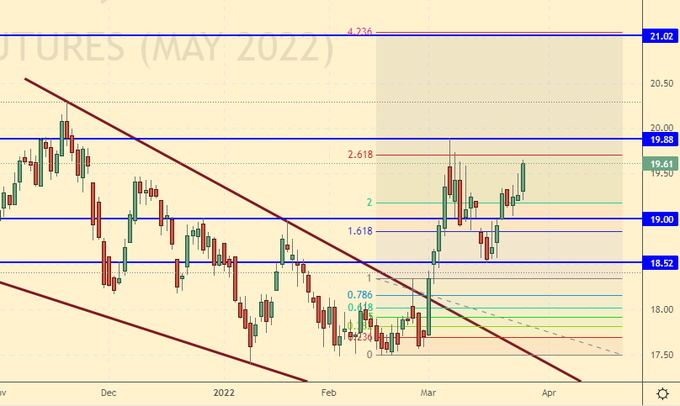 Growth scenario: we are considering the May futures, the expiration date is May 18. Fertilizers for coffee trees are not enough. If we return above 230.0 we will buy again.

Falling scenario: shorts will continue to hold. When approaching 200.0. you can take profit. 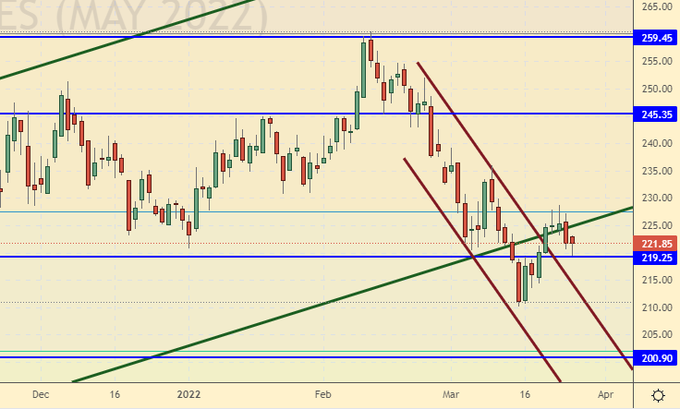 Over the past week, the difference between long and short positions of managers increased by 5.6 thousand contracts. The bulls entered the market in a small herd, while prices changed by 5%, which tells us about a thin market in which strong movements are possible.

Growth scenario: we are considering the April futures, the expiration date is April 29. We have visited the 120.00 mark. Further growth is possible only after the OPEC meeting on March 31st. We do not open new buy positions.

Falling scenario: it’s scary to sell, but it’s possible. Short from 127.00 is acceptable.

Purchase: think after the OPEC meeting. 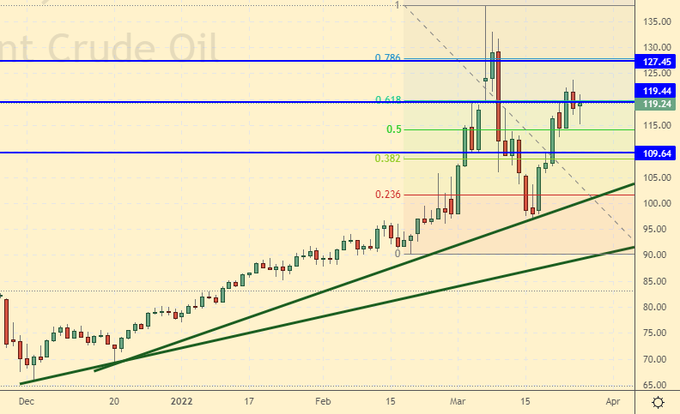 Fundamental US data: the number of active drilling rigs increased by 7 units and now stands at 531 units.

Over the past week, the difference between long and short positions of managers has decreased by 7 thousand contracts. Vendors came to the market. At the same time, the price continues to grow, which tells us about the possibility of a downward reversal.

Growth scenario: we are considering the May futures, the expiration date is April 20. The current buy levels are too high. Those who wish can go long with an ambitious target of 150.00.

Falling scenario: sales from current levels are possible. The world is unlikely to see any GDP growth this year. 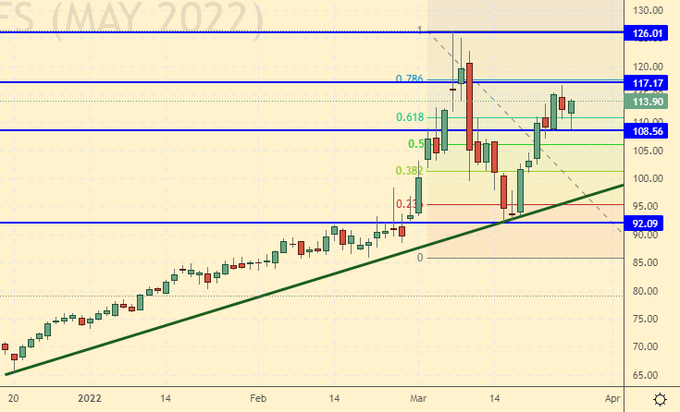 Growth scenario: we are considering the April futures, the expiration date is April 12. The rise in retail prices does not stop. Even if oil becomes cheaper, it is not a fact that gasoline will become cheaper. We hold longs.

Falling scenario: the current levels are technically interesting for short entry. You can try. 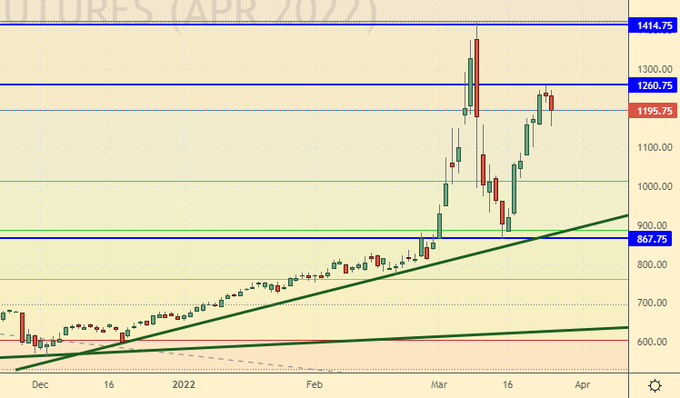 Growth scenario: we are considering the May futures, the expiration date is April 27. Demand for gas this year in the Western world will be greater than ever. We hold longs.

Falling scenario: we will not sell. The situation is nervous on the gas. Everyone is scared. Recommendation: 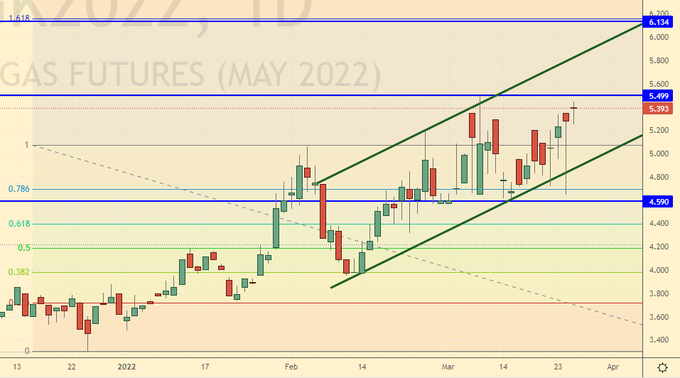 Growth scenario: keep long. It is possible that demand for US bonds will fall this year.

Falling scenario: here you can sell. The people can believe in the strength of the dollar amid the announced cycle of rate hikes. 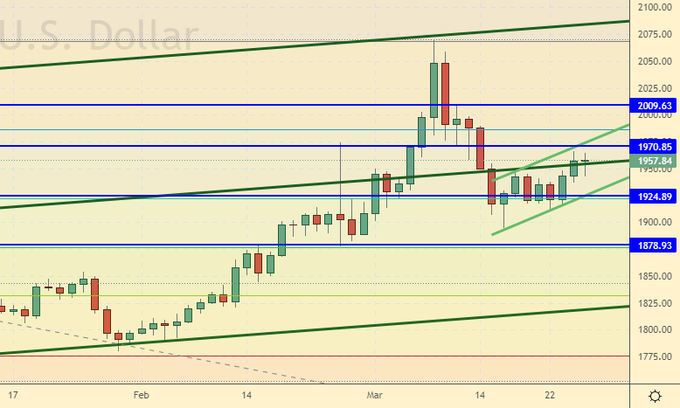 Growth scenario: The ECB is unlikely to rush to raise rates. The beautiful mantra that we cannot accept inflation above 2% has ceased to exist. We are waiting for a move to 1.0600.

Falling scenario: the dollar may get stronger. We are back in the falling channel. 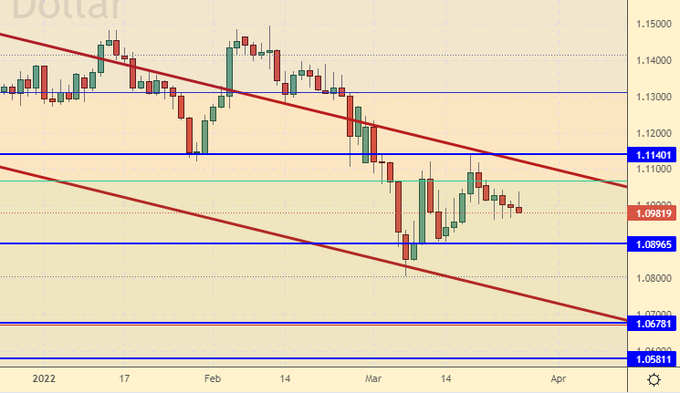 Growth scenario: we may continue to fall. Some kind of negative event is needed for the growth to continue. So far, the situation is completely under the control of the Central Bank and the Government.

Falling scenario: over time, the demand for parts and components from companies will only increase. Therefore, we believe in a fall to 85.00, lower levels are not considered yet. 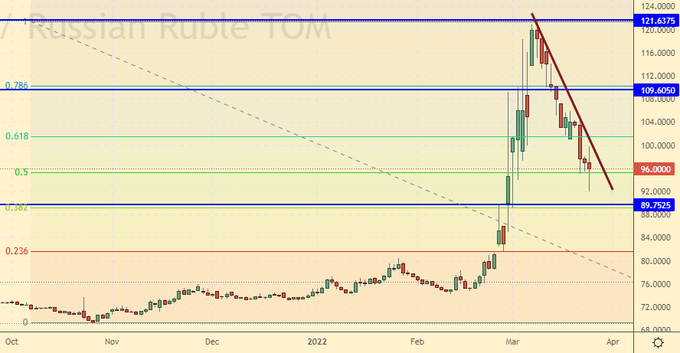 Growth scenario: the Central Bank opened trading in blue chips. Those who wish can buy the Russian market for 4 hours a day. Shorts cannot be opened. Based on the results of two days, we see that investors do not understand why they should buy shares at the same prices as they were a month ago. Quotes are clearly overpriced. Yes, the owners can buy securities to maintain capitalization, but companies must generate profits, and whether most blue chips will have it by the end of 2022 is a big question. Let’s wait for more interesting prices to enter the long.

Falling scenario: we can go down even if the allocated trillion rubles is used for purchases. Investors have deposits at 20%, why do they need an unpredictable market now. Shorts can not be opened, so we do not sell. 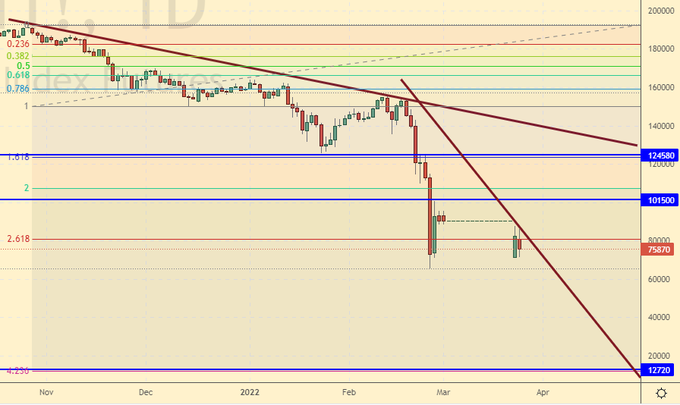