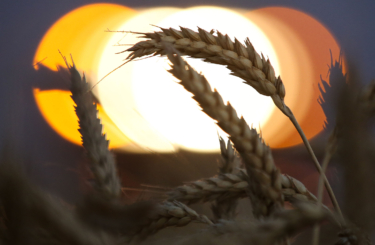 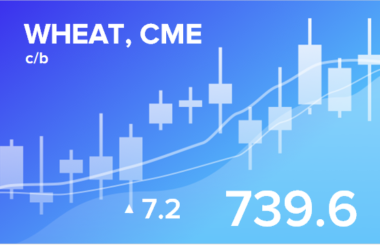 Global production of cereals, wheat and coarse grains in 2021/22, according to the IGC forecast, will grow by 3% yoy to a record 2,283 million tonnes, primarily driven by corn, plus 75 million yoy.

World cereal balances will be reduced for the fifth consecutive year to a minimum in 7 seasons and will amount to 589 million tons, minus 4 million tons year-on-year. At the same time, the reduction for wheat, barley and triticale is only partially offset by a slight increase in corn and rye residues.

At the moment, wheat looks a little stronger than corn, which is still in the range. We can expect a slight decline in prices next week. Note that the price levels for cereals are at their highest levels over the past six years.

For the commodities market, Powell’s speech only means that traders can go back to tracking the balance between supply and demand and not waste time on the dollar.

Drilling activity in the US continues to grow. The number of drilling rigs increased by 5 units during the week and reached 410 units. Production growth prospects remain positive. The current production level of 11.4 million barrels per day may be cut in the coming weeks.

The current surge in the oil market can be attributed to an accident at a Mexican oil platform and Hurricane Ida on the Louisiana coast. Oil production in the Gulf of Mexico has been suspended by 90%. Note that the influence of these factors on the market will be temporary, although it will undoubtedly support the bulls on Monday and Tuesday.

Powell delivered his keynote speech Friday at a US bankers’ symposium. Everything he said can be shortened to the following phrase: «There will be no interest rate increase in the coming months».

Let’s leave his reasoning about curtailing the quantitative easing program outside the brackets. This is for fans of astrology, esotericism and other forms of filling empty heads. The dollar will be weak for the historically foreseeable future. There is no need to talk about any strong growth that some traders dreamed of.

If we assume that inflation in the United States, as Powell expects, will decline, then the rate will not have to be raised at all either next year or in 2023.

The ruble reacted with strengthening to Powell’s weak speech at a symposium in the United States. Now money will be forced to look for options for parking. The stock market is at its highs, bonds in the West do not bring anything, you will have to go to emerging markets, where bank interest rates are nominally positive.

Note that the rate of the Central Bank of the Russian Federation on the ruble by the end of the year may turn out to be positive in its pure form, after deducting inflation.

Over the past week, the difference between long and short positions of managers decreased by 13.8 thousand contracts. At the same time, as many buyers left the market, so many sellers appeared. Wheat will be hard to grow in the coming week.

Growth scenario: December futures, the expiration date is December 14. It should be admitted that if the market remains above 700.0 until September 15th, the prospects for growth towards 900.0 cents per bushel will become tangible. Shopping at current levels is somewhat provocative, but technically appropriate. Let’s enter long with a small volume.

Falling scenario: bears have no more than 10 days left. Below 650.0, the market is not visible. Sales are only possible at 1H intervals. Recommendation: 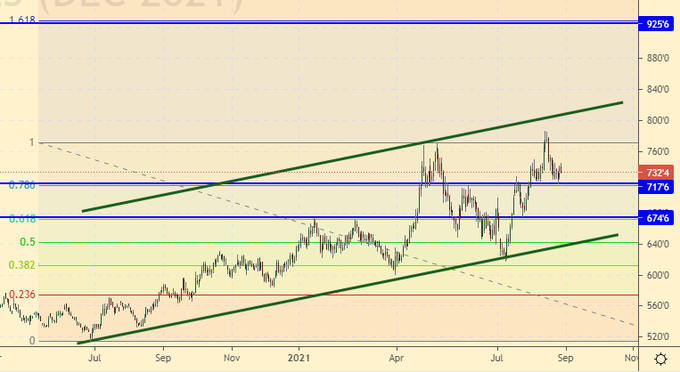 Over the past week, the difference between long and short positions of managers decreased by 11.2 thousand contracts. Sellers came to the market, buyers left it in approximately the same volumes. At the same time, the influence of speculators on the situation can be considered minimal. Prices continue to be in the range.

Growth scenario: December futures, the expiration date is December 14. Here you can buy with little risk. Let’s bet that the market will behave aggressively this year and grow in September.

Falling scenario: we continue to hold a very successful short entry from 584.0 and continue to want 500.0, 475.0 and 450.0. However, the bullish sentiment in the market is growing. The people are scared by the pandemic. States will expand their food supplies. We don’t believe in the success of the short, but we keep it. 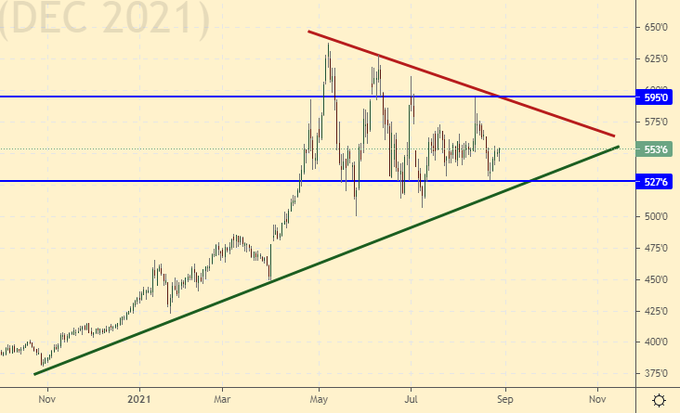 Growth scenario: November futures, expiration date November 12. The fundamental situation for soybeans does not imply an increase in prices. We will buy only after growth above 1400.0.

Falling scenario: continue to hold the previously opened shorts. As before, we will focus on the 1111.0 level. 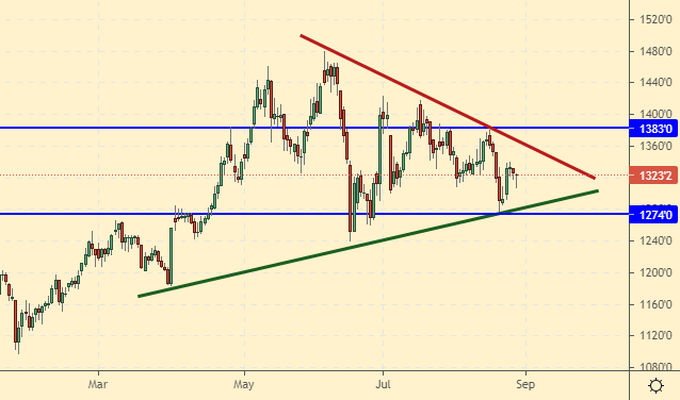 Growth scenario: October futures, expiration date September 30. The market does not want to fall. We will buy from the current levels.

Falling scenario: we continue to hold sales from 19.50. If the market falls below 19.30, you can add to the shorts. 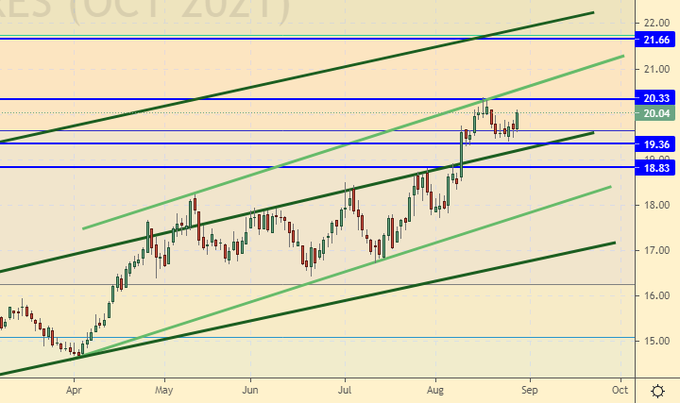 Growth scenario: September futures, expiration date September 20. The market does not want to fall. We hold positions. Let’s add at the current levels to the previously opened longs.

Falling scenario: we will not sell. Yes, there are chances of a downward reversal, but they are minimal. 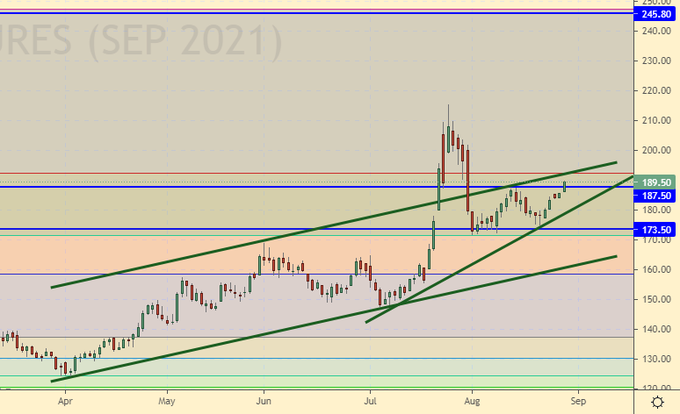 Over the past week, the difference between long and short positions of managers decreased by 8.2 thousand contracts. At the same time, there was a slight outflow of buyers from the market. Thus, the current rise in prices is not supported by the growth in the volume of speculators.

Growth scenario: September futures, expiration date September 30. After the price spike last week, the situation became uncomfortable for analysis. We take a break in trading, at least for a week.

Falling scenario: as long as prices are below 73.50, we can expect to continue falling. To enter a short, it is better to wait for confirmation in the form of a long red daily candle.

Sale: after the appearance of a red candle with a long body. Stop above the high of this candlestick. Target: 61.50. 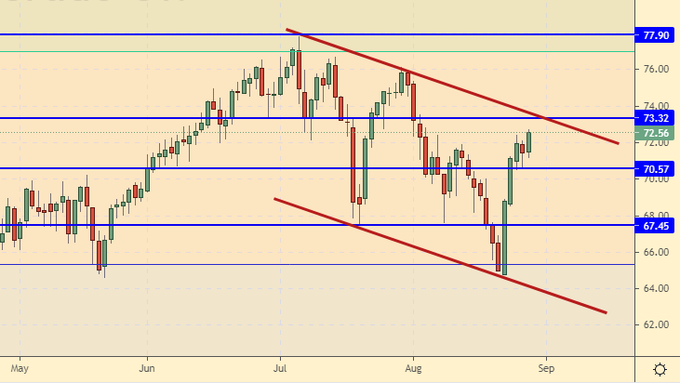 Fundamental US data: the number of active drilling rigs increased by 5 units and is 410 units.

Over the past week, the difference between long and short positions of managers decreased by 9 thousand contracts. At the same time, against the background of rising prices, the number of short positions grew, which tells us that free money is being put on the continuation of the fall.

Fall scenario: the situation is in equilibrium. If a candlestick with a long red body appears, you can sell.

Sale: after the appearance of a red candle with a long body. Stop above the high of this candlestick. Target: 58.33. 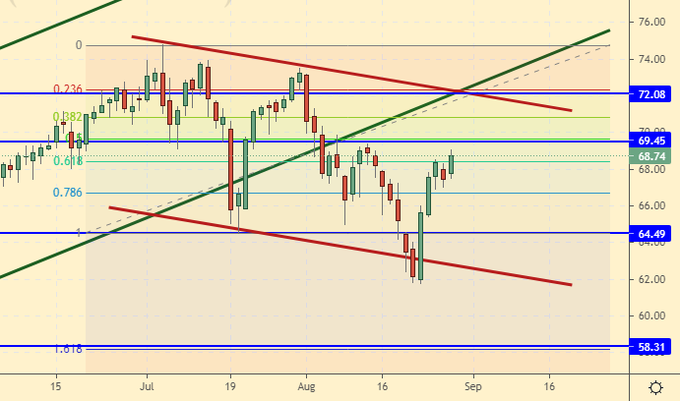 Growth scenario: September futures, expiration date September 10th. Growth looks too aggressive for the end of the car season. We do not buy.

Falling scenario: the impact of hurricanes in the Gulf of Mexico on production is seasonal. If the market turns down, it makes sense to sell.

Sale: after the appearance of a red candle with a long body. Stop above the high of this candlestick. Target: 510.00. 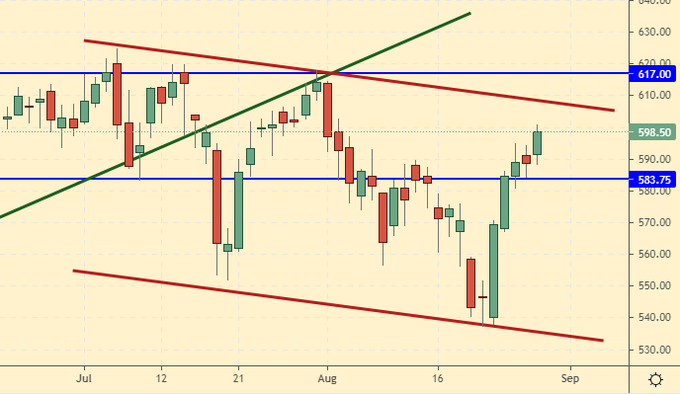 Growth scenario: October futures, expiration date September 28. In Europe, some kind of legal game has begun with Nord Stream 2, if not blackmail. They want to buy a pipe from Gazprom, but in fact take it away. Gazprom stopped selling gas for 2022. Against the background of this aggressive dispute, the rise in prices will continue.

Falling scenario: we didn’t believe in the short, and we still don’t believe it. We do not sell. 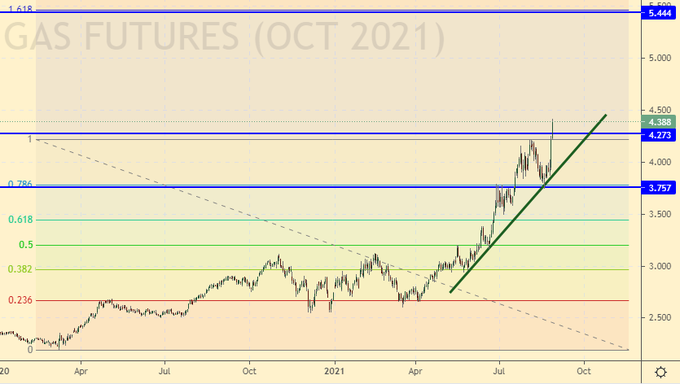 Growth scenario: Powell’s speech on Friday did nothing to strengthen the dollar. There is inflation in the United States, but the rate is at zero, it is a robbery of the masses. Gold is capable of going by 2060.

Falling scenario: for two weeks we did not succumb to the temptation to sell. And they were right. In the current situation, we are outside the market. 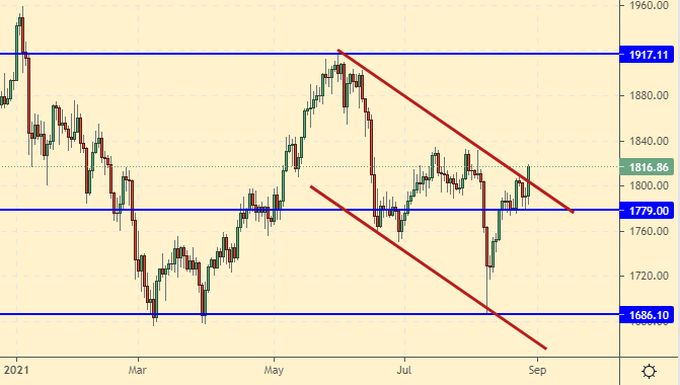 Growth scenario: the dollar could have slightly strengthened against the euro on the expectation of curtailing the quantitative easing program by December. But it is not yet clear how strong the disappointment of traders is due to the lack of signals to increase the rate in the future. For now, let’s put on the growth of the pair.

Falling scenario: there will be a struggle around 1.2100. There, perhaps, we will sell. Current levels are understated. 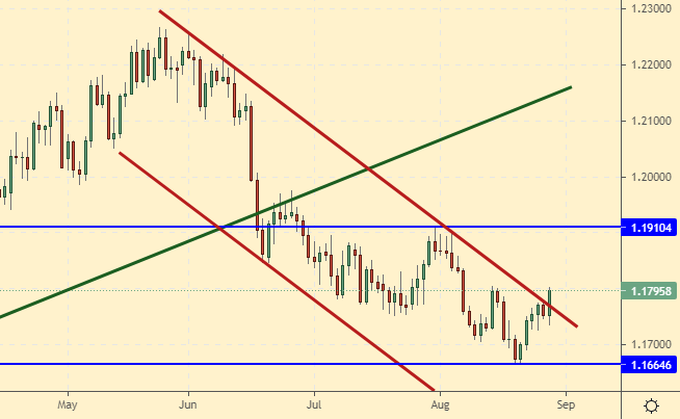 Growth scenario: on Monday, it will be revealed whether the long red Friday candlestick was a simple emotion or serious sentiment is behind it. We do not open new purchase positions. We hold the old ones for now.

Falling scenario: we will keep the short opened last week from 73.90. Moreover, we will add in the case of a fall in prices below 73.10. If the dollar becomes bad on a global scale, then the ruble can strengthen to 67.75 on expensive oil and a high Central Bank rate. 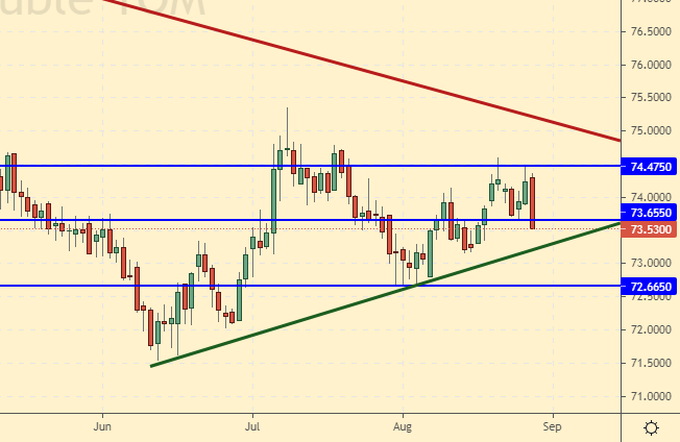 Growth scenario: on the stock market this fall we will observe a celebration dedicated to the perpetually weak dollar. Most likely, we will have a quick and beautiful leap upward. Further, something, while it is not yet known what exactly, will happen, and an equally sharp rollback will follow.

Falling scenario: at this stage, we continue to disbelieve in the market fall. If no foreign policy exacerbations occur in the fall, then the futures on the RTS index can rise to the level of 178,000. Recommendations: 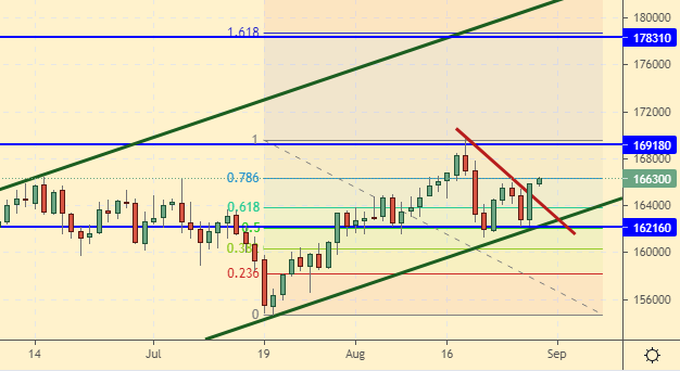