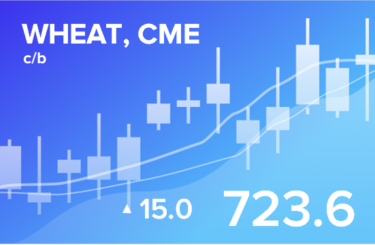 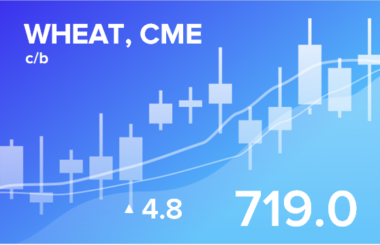 The wheat market lost 50 cents a bushel or about 6 percent over the week, and so far there is no reason for traders to buy again. The new harvest puts pressure on prices. Not all farmers can afford to keep grain and are forced to sell at current prices, which, by the way, are 44% higher than last year’s.

On Friday, corn broke down the long-term support line and now, relying on seasonality and technical factors, quotes may go to the level of 500.0 cents per bushel. Also, a short-term visit to the 450.0 level cannot be ruled out.

The Russian Ministry of Agriculture began at the wrong time with maneuvers with daily reports during the harvest. In fact, the data release has been suspended since August 6th. It was impossible to come up with a better time to “clarify the methodology for collecting information”. We hope to resume the release of statistics in a daily format.

The end of next week and, as a result, Monday 30th can get quite nervous. Reason: meeting of bankers from around the world in Jackson Hole from 26th (Thursday) to 28th (Saturday). According to preliminary data, the main events will fall on Saturday, but earlier appearances of any statements and opinions are also possible. Everyone is interested in what Mr. Powell has to say.

If the speeches remain vague and soft, the dollar may have a bad September until the Fed meeting on the 22nd. For commodity markets, in particular for precious metals to a greater extent and for everything else to a lesser extent, a weak dollar is a strong supportive factor.

Fears of a new round of the pandemic have taken over the market oil, and he decided to fall. In the United States, there is an increase in the number of cases. All the troubles are blamed on the «Delta» virus, which is more infectious than its predecessor. During the week, prices went down five dollars. Next week, perhaps there will be a short break and we will recover to 67.50, after which the fall will continue to the 61.50 level.

The growth of drilling activity in the USA is noteworthy. During the week, the number of active drilling rigs increased by 8 units, a week earlier the growth was 10 rigs. At the same time, last week, the demand for gasoline decreased insignificantly, but still, which also puts pressure on prices.

The ruble suffers slightly from falling oil, but is supported by growing demand for Russian government bonds. The RGBI index is still prone to growth.

Western countries are forced to put up with the futility of sanctions, moreover, they have to admit their dependence on Russian energy exports. Merkel came to us, smiled, but at the same time agreed to the point that Germany would use Nord Stream 2 as a lever of influence on Moscow, forgetting to add that only in warm winters. Such statements put pressure on the ruble, but no one promised us an easy life.

It should be noted that the possibility of expanding Moscow’s influence on Afghanistan has arisen, and without large financial costs. If everything is limited to small amounts of aid to Tajikistan and Uzbekistan, then in this case it is a long-term fundamental positive for the ruble.

Over the past week, the difference between long and short positions of managers increased by 5.2 thousand contracts. In fact, we see that the weak attempt of the bulls to break above the level of 800.0 cents per bushel was unsuccessful. The market is falling.

Growth scenario: September futures, expiration date September 14. We are not buying yet. We are betting that under the pressure of the new harvest, prices will fall below 700.0 cents per bushel.

Fall scenario: given the difficult current season, we will place sell orders in the area of 740.0. A unidirectional decline in the current environment will look overly pessimistic. 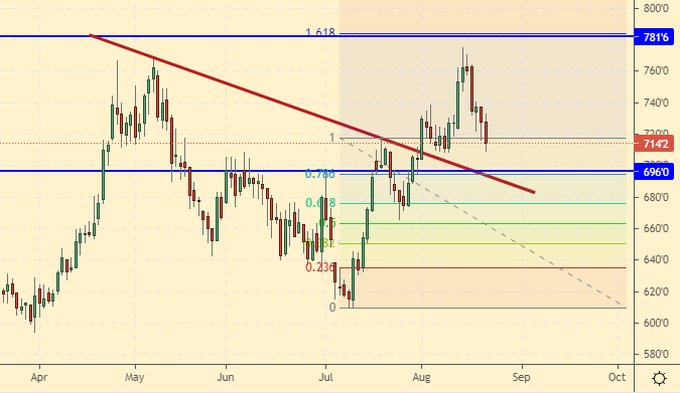 Over the past week, the difference between long and short positions of managers increased by 22.6 thousand contracts. The bulls tried to attack at the beginning of last week, but they failed. Prices could not hold above 550.0. The current market sentiment is bearish.

Growth scenario: September futures, expiration date September 14. For now, we refuse to buy. The market has every chance of moving below 500.0 cents a bushel.

Falling scenario: we keep an extremely successful short entry from 584.0. The fall to 425.0 is seen as the most extreme decline in the current situation. Taking profit at 475.0 and 450.0 is not prohibited. Recommendation: 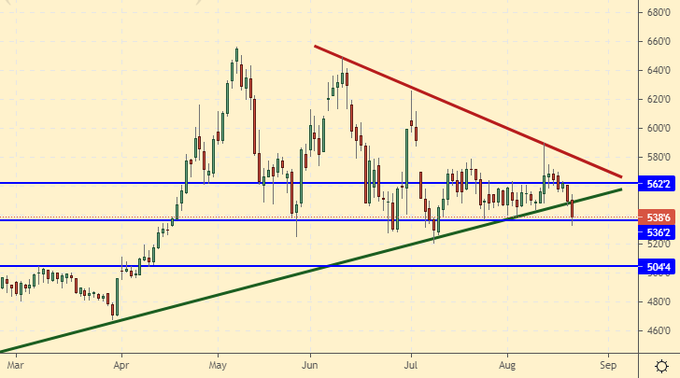 Growth scenario: September futures, expiration date September 14. The bulls failed to go above 1400.0. We are not buying yet. We are waiting for lower price levels.

Falling scenario: we will continue to hold positions opened earlier. Here, those who wish can increase their shorts by 20 — 25%. As before, we will focus on the 1111.0 level. 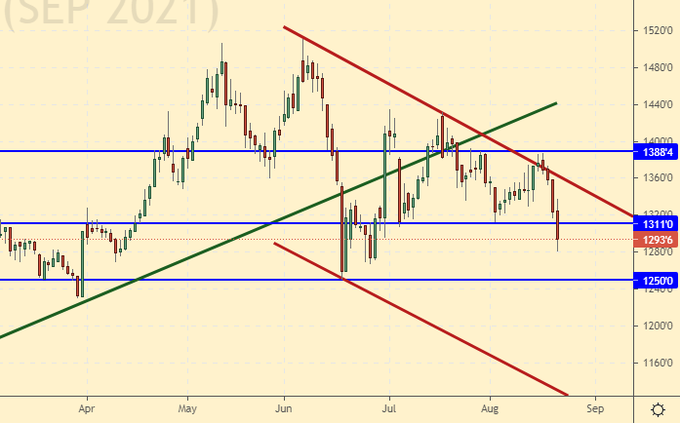 Growth scenario: October futures, the expiration date is September 30. We continue to wait for the market to fall by 19.00. We do not buy at the current levels. Falling scenario: keep selling from 19.50. We do not expect a significant decline in prices, but a fall to 16.50 is seen. 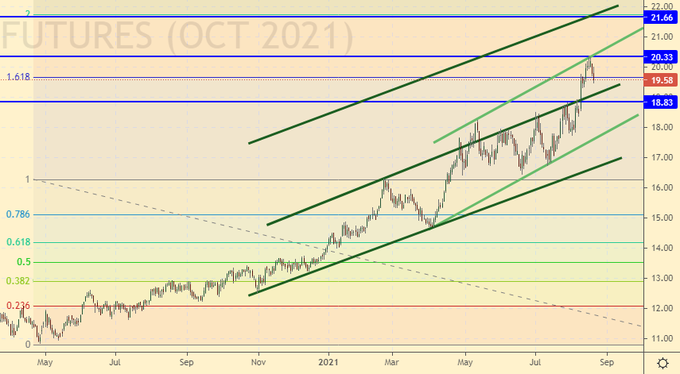 Growth scenario: September futures, expiration date September 20. The surge in prices from 160.00 to 215.00 is still the main bullish event. It will not be easy for the market to go below 170.00, so we keep the long counting on the resumption of growth.

Fall scenario: we sold a week earlier, now we just have to wait. We are not opening new shorts. Recommendation: 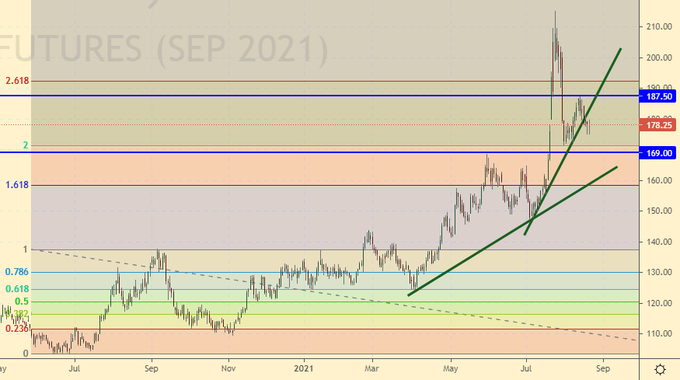 Over the past week, the difference between long and short positions of managers decreased by 22.5 thousand contracts. A number of hedge funds exited long oil positions. At the same time, sellers became more active, as a result of which prices fell.

Growth scenario: August futures, the expiration date is August 31. If the market hits 61.60 next week, then buying is a must.

Falling scenario: we will continue to hold the previously opened short. The fall is fast, which makes us speculate about a possible correction next week, which will have to wait before the market reaches our target at 61.60. 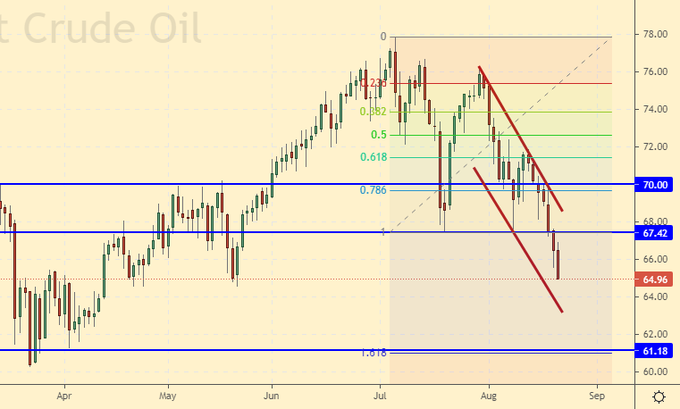 Fundamental US data: the number of active drilling rigs increased by 8 units and is 405 units.

Over the past week, the difference between long and short positions of managers increased by 1.6 thousand contracts. The data does not reflect the current bearish situation on the market, however, we see that at the beginning of the week, WTI speculators had doubts about the need to build up short positions.

Growth scenario: October futures, expiration date September 21. The 58.50 area is interesting for shopping. We are waiting for a fall to this level and enter the market.

Falling scenario: waiting for reaching the target at 59.10. Let’s move stop orders along the trend. 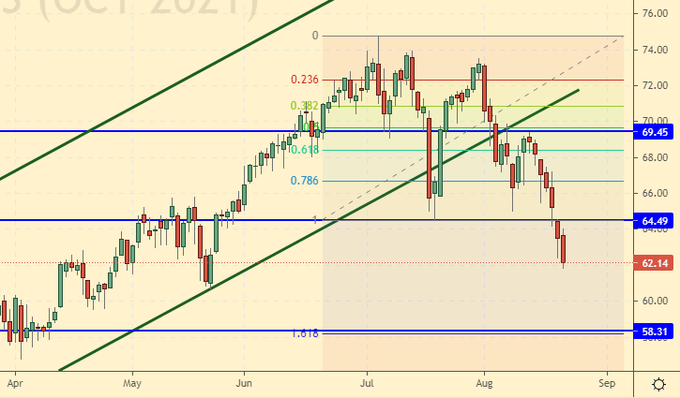 Growth scenario: September futures, expiration date September 10th. We don’t think about shopping yet. The car season is coming to an end. Out of the market.

Falling scenario: waiting for a fall to 520.0. There you can fix 85% of the position. The rest can be left to work out the theory of a possible move to 500.00. Recommendation: 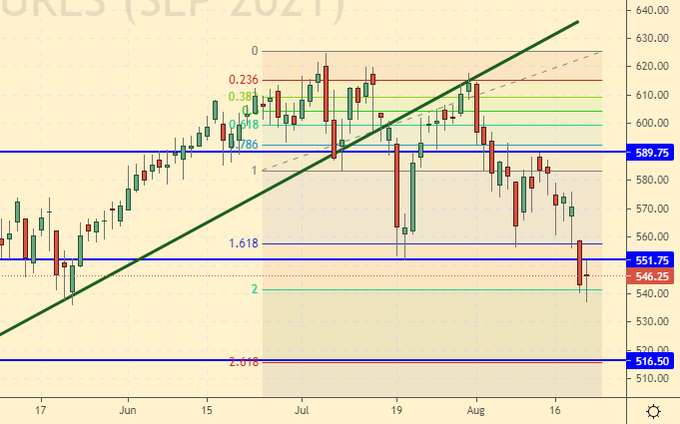 Growth scenario: October futures, expiration date September 28. We switched to the next futures contract. We will continue to stand in longs. It cannot be ruled out that we will roll back to 3.500 before the upward movement continues.

Falling scenario: do not sell. Short is possible only on «1H» with targets in the region of 3.500. 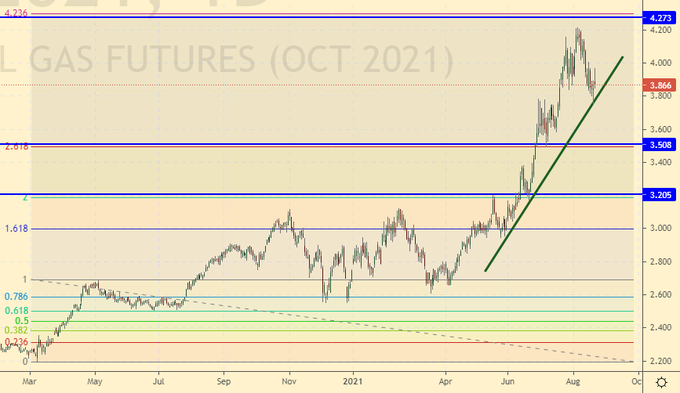 Growth scenario: at the end of next week for gold, strong volatility is possible due to the meeting in Jackson Hole. Out of the market so far.

Falling scenario: we will continue to refrain from any deals. Fundamentally, a short in the situation that sometime, by the middle of 2022, the Fed will begin to curtail the quantitative easing program is not visible. 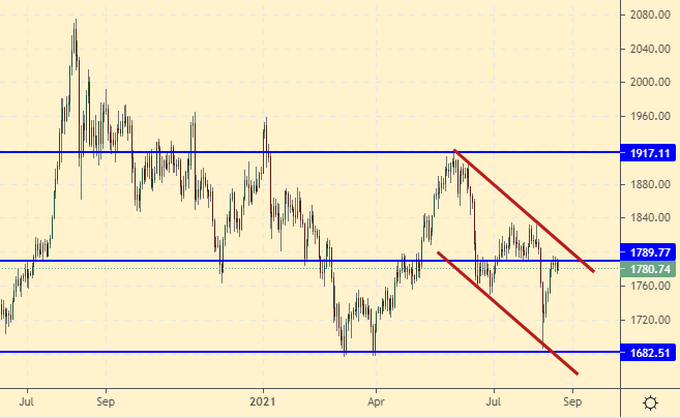 Growth scenario: showed a new local minimum. In the current situation, we do not enter long.

Falling scenario: The market is already just praying for Powell’s speech in Jackson Hole at the end of the week. If it does not meet expectations, then we will get a gap up the pair on Monday, August 30th. Recommendations: 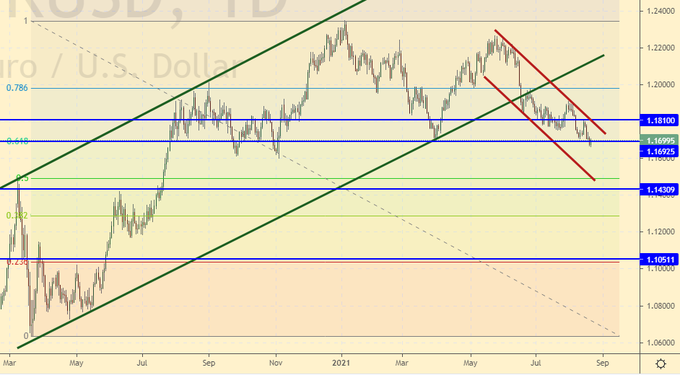 Growth scenario: let’s tighten stop orders for the current longs. We do not open new positions. We are afraid of the coming volatility. We do not know what Powell will say at the end of the week at the bankers’ summit.

Falling scenario: we will go short after the pair falls below 73.90. The dollar could be hit hard if the Fed’s policy diverges from the positive market expectations for the US currency. 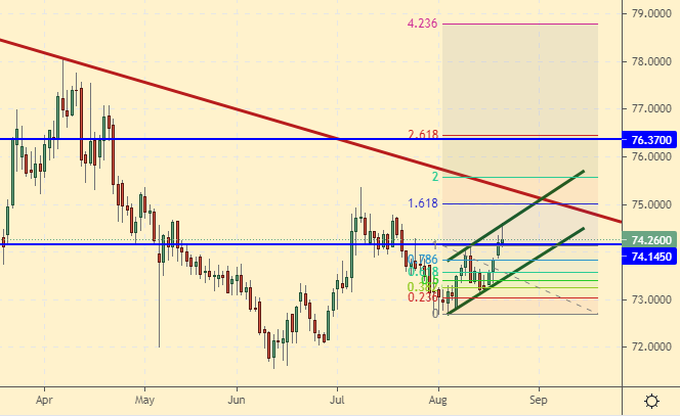 Growth scenario: the SP500 is still hoping that the weak dollar policy will continue for the foreseeable future. Indeed, growth in rates in the United States is not expected until the end of 2022. Against this positive background, the RTS index is able to show another growth wave.

Falling scenario: I would not like to miss the collapse, but the market conditions are still favorable for the continued growth of quotations. What to do? In the current situation, we will probably sell only after the market falls below 155,000. 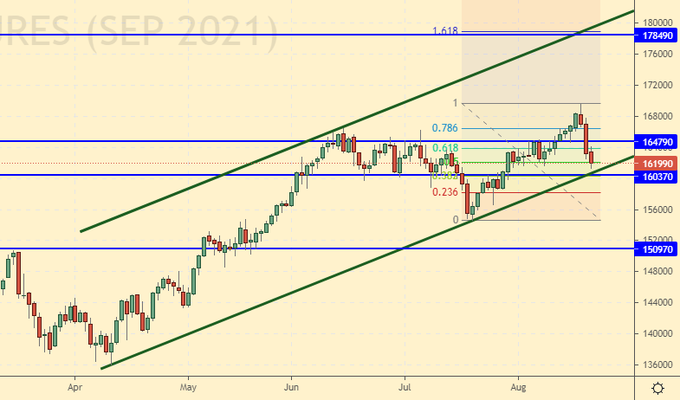