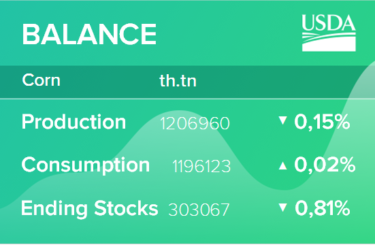 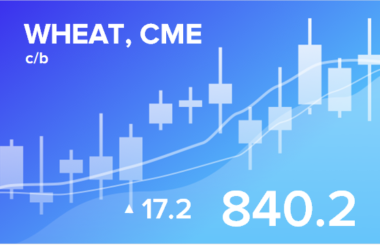 In circumstances where there is a threat of new lockdowns at the level of countries and continents, food prices will not go down. We can observe small corrections, but we cannot say that the grain or oilseeds market will decline.

The story with a twofold increase in fertilizer prices and their physical shortage will also prevent the markets from sinking. After gas prices in Europe soared five to seven times, the cost of fertilizers also went up sharply. Current gas prices in the Old World remain at levels close to $ 1,000 per 1,000 cubic meters, which does not give European producers the opportunity to produce, first of all, nitrogen fertilizers at normal prices, such as urea.

The poorest countries may not financially pull the sowing season, which will lead to an increase in demand for grain on the international market next fall.

Cheerful greetings to all investors and traders from the falling market. The authorities began to fear a new virus with the «omicron» index. If a week ago we were discussing whether the whole of Europe would be quarantined, now it is worth considering whether the whole World will be closed for quarantine. Israel did not wait and guess, Tel Aviv forbade the people to move around the world.

As everyone saw, on Friday oil attempted suicide and went down by $ 10 in a day. If the OPEC + countries do not suspend the increase in production next week on Thursday, December 2, Brent will be at 60.00 very soon. If the supply on the market is reduced, we will still go down, just not so quickly. It is worth noting that if fear of a new strain of the virus paralyzes the mind, then, like a year ago, we can again see wild sadness in the eyes of oil exporters.

Against the background of the horror of a new kind of Chinese infection, the question arises again on the scene related to the truly immeasurable help of the American authorities to their citizens. If incentive programs are resumed, then the value of everything in dollars will only grow. Everything except oil.

To be honest, we expected more from the ruble. The surrender of positions against the dollar in November with oil prices above $80 per barrel is frankly disappointing. Now that the oil has gone down, unfortunately, we cannot talk about a return to the 70.00 level. The growth of the dollar will again accelerate inflation, Nabiullina will again raise the rate, and so on in a spiral.

What can help? First: revision or cancellation of the budgetary rule on purchases of dollars, second: global disappointment in the US currency in the event of a suspension of the curtailment of the quantitative easing program in the United States. The US Federal Reserve meeting is already on December 15th, it will be interesting.

Growth scenario: March futures, the expiration date is March 14. We cannot approach 900.0 yet. We will use the current rollback for a new round of purchases.

Falling scenario: just like a week earlier, we need the level 900.0 for a good short. While we are out of the market. 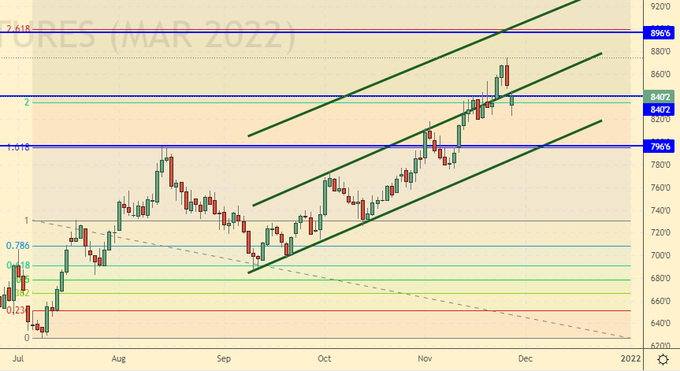 Growth scenario: March futures, the expiration date is March 14. We continue to hold longs with the target at 600.0. Corn looks strong after growing on Friday.

Falling scenario: when approaching 600.0, one can sell in anticipation of a rollback to 560.0, hardly lower. 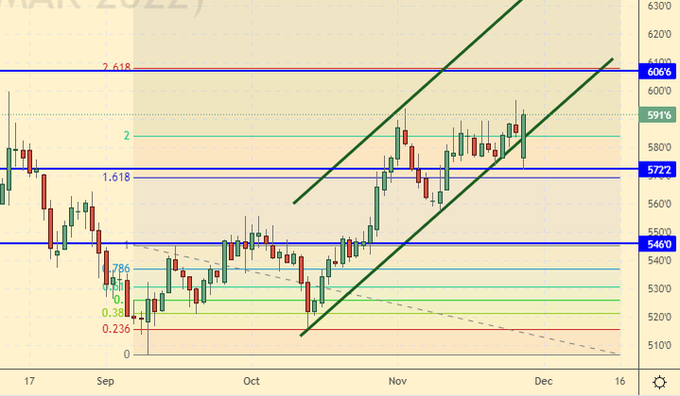 Growth scenario: January futures, the expiration date is January 14. The market holds above 1250.0. You can buy here. It is possible that the next quarantines will increase the demand for oilseeds.

Falling scenario: we continue to note that we have exited the falling channel upwards. We are not selling yet. 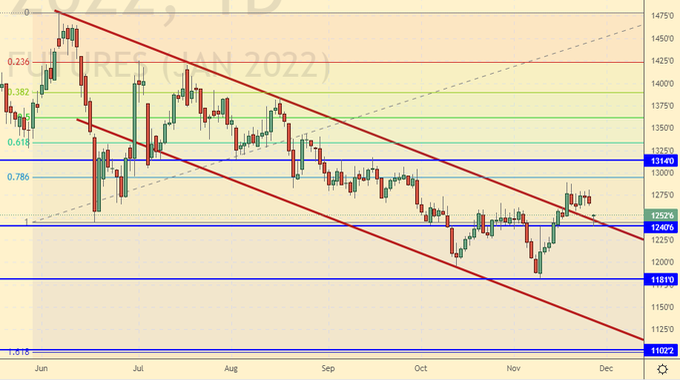 Growth scenario: March futures, the expiration date is February 28. Most likely we are going to 18.15. When you approach this level, you can buy.

Falling scenario: we will keep the short open a week ago. The move to 18.15 is very probable. 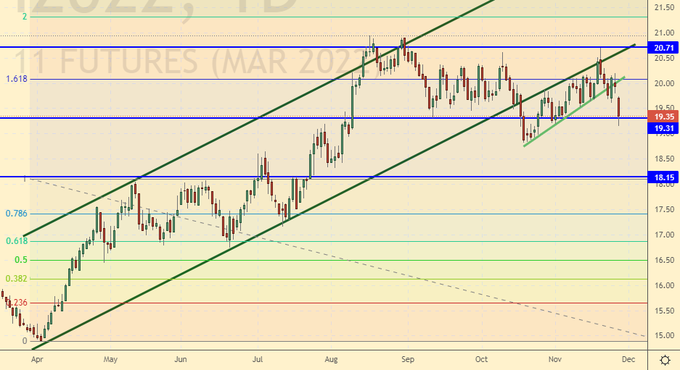 Growth scenario: March futures, the expiration date is March 21. The market has reached our goal. All with a profit. We do not make new purchases.

Falling scenario: sell here. The upward impulse is complete. Should see a pullback to 200.00. 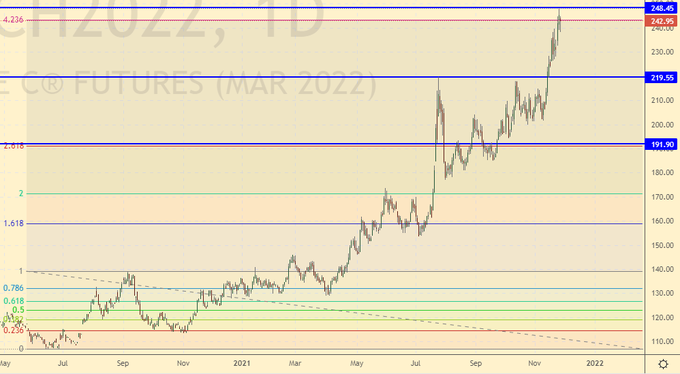 Over the past week, the difference between long and short positions of managers decreased by 10.1 thousand contracts. We see that before Thanksgiving there were no buyers in the United States. The bearish sentiment in the market has been already for several weeks, which ultimately led to a strong fall on Friday.

Growth scenario: December futures, expiration date December 31. We will continue to refuse purchases. The fundamental situation is not in favor of the bulls. And how many before this fall they wrote about oil for $ 100. All around the puppeteers.

Falling scenario: considering the rate of the fall, you could have stayed in shorts and did not close the profit at 74.60, however, the levels for fixing were clearly good. Those who stayed in the position up to the level of 60.00, and possibly 50.00, are holding. Those who came out are counting on a pullback to 76.00 in order to sell again. Recommendation: 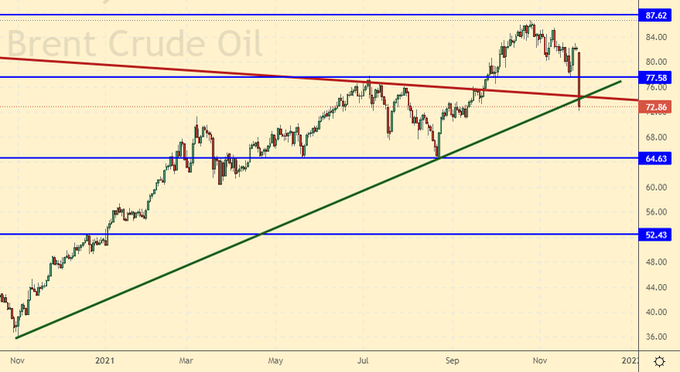 Fundamental US data: the number of active drilling rigs increased by 6 units and is 467 units.

Growth scenario: January futures, the expiration date is December 20. Considering the speed and unidirectionality of the fall on Friday, we are not buying.

Falling scenario: the market reached our target at 70.60. Now we will sell if the market rises to the level of 73.00. Low volume short is possible from current levels. 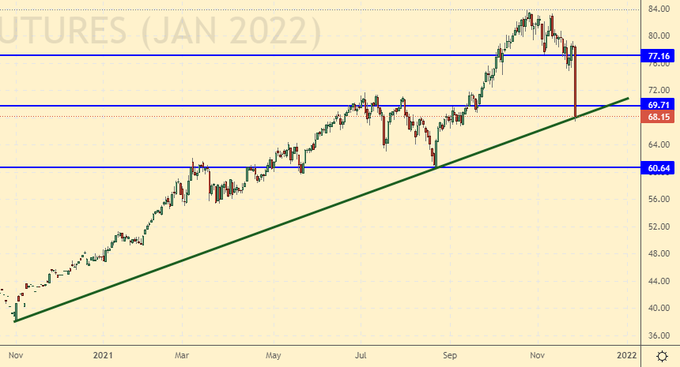 Growth scenario: December futures, the expiration date is December 10. We are falling extremely aggressively, the support line is under threat. We do not buy. 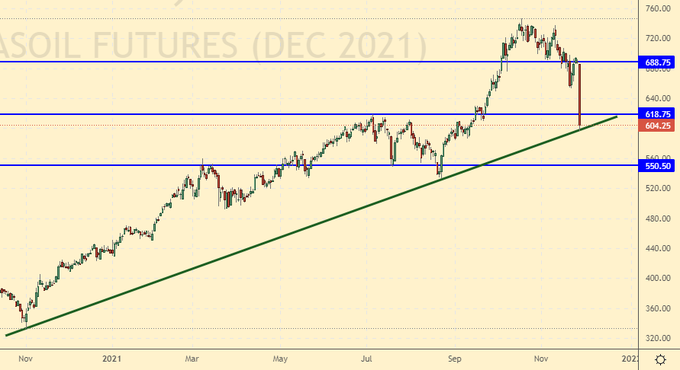 Growth scenario: January futures, expiration date December 29. Our confidence in buying has begun to bear fruit. Let’s keep shopping. Oil is falling, you should be careful with longs.

Falling scenario: do not sell. Germany will only have enough gas reserves until March. Green energy. 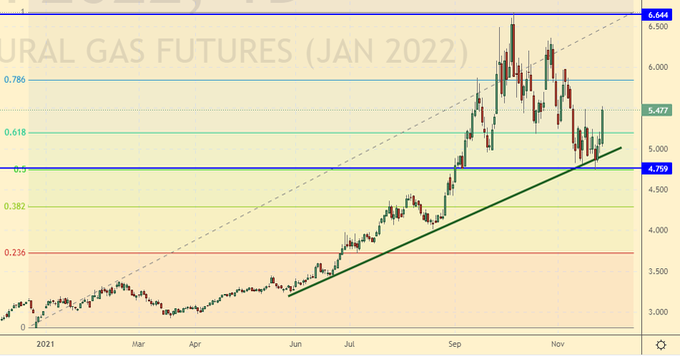 Growth scenario: the market went not only below 1820, but also below 1800. This is a surprise, and an unpleasant one. We will buy at the current levels, although there is fear.

Falling scenario: if the market goes below 1750 it will be extremely surprising. But this may not happen, since the threat of new lockdowns will force the dollar’s value relative to gold to be revised downward, of course. 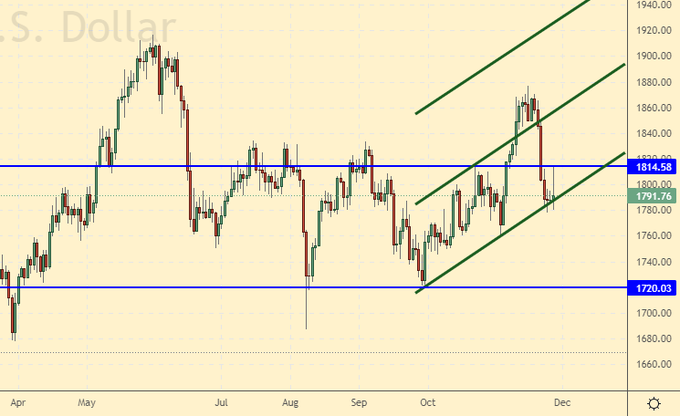 Growth scenario: a new strain of the Chinese virus hit the US dollar on Friday. The people are excited, and on Monday they will be even more excited. The euro has a chance to rise to 1.1700.

Falling scenario: due to growing uncertainty, we are forced to tighten stop orders close to the current values. 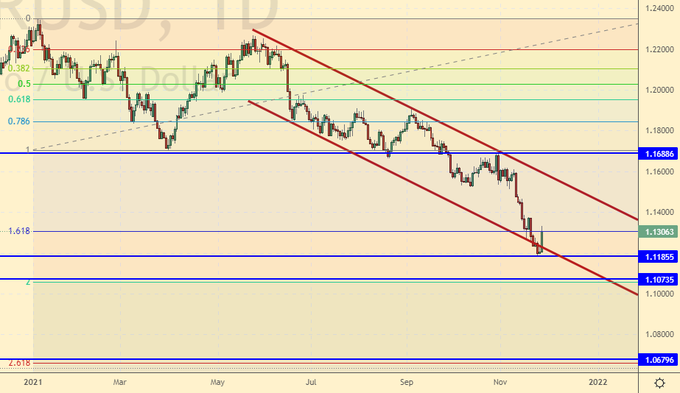 Growth scenario: there is very little doubt that the ruble will visit the 77.00 level. Whatever signs of weakness the dollar shows due to the threat of a new round of a pandemic, the main driver for the ruble will be the price of oil. And it can go to the level of 50.00 Brent in case of slowness of the OPEC + countries.

Falling scenario: we are not thinking about sales yet. The situation is extremely vague. 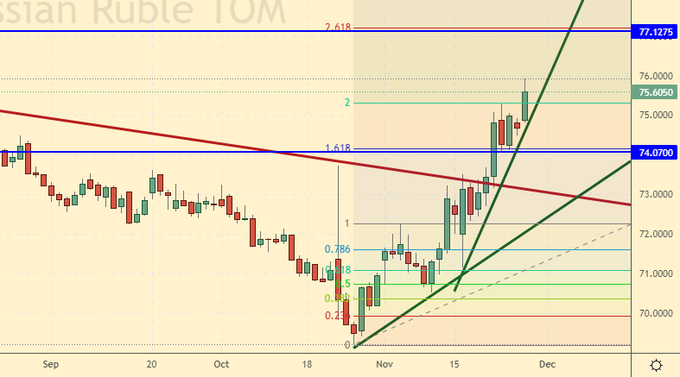 Growth scenario: December futures, expiration date December 16. We continue to refuse purchases. When approaching 150,000, those who wish can enter the long, but there is no need to cherish high hopes. It is possible that Friday, November 26th was only a forerunner, but Monday will appear before us in all its red glory. And this applies not only to the Russian market, but also to the global one.

Falling scenario: as well as three weeks earlier, we do not open new sell positions, we keep the old ones. The move to 150,000 is no longer just possible, it is highly probable. You can close 25% of the volume of previously opened shorts. 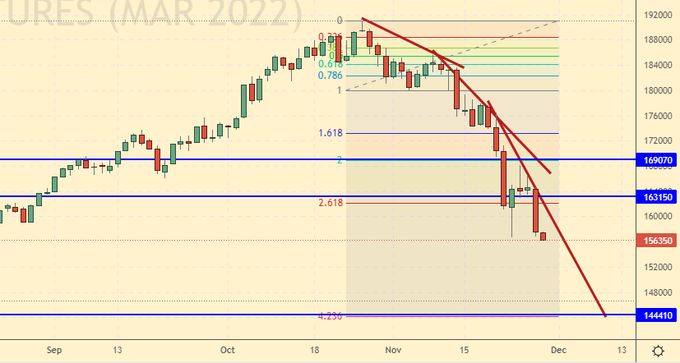