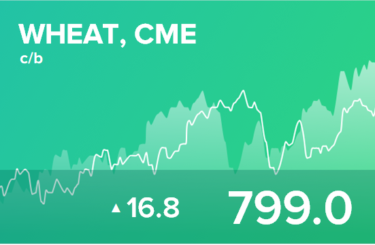 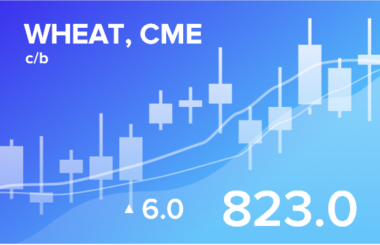 At the level of psychology, grain traders pushed the buyers, and these are mainly the state structures of the importing countries. We do not know how the punching process took place, we can only assume that certain work was carried out. Egypt pays more and more with each new tender, the price approached the level of $ 350 per ton.

A significant increase in grain prices could be justified in the event of a crop failure, but the harvest is record-breaking. Yes, demand has grown by 3% compared to last year, but here it is worth revealing a terrible secret: the demand for wheat is growing following the volumes produced year-on-year in the foreseeable historical perspective.

When the amount of grain is not big, then the demand also falls, since the price for it rises, but in this case, we see a rise in price with a record harvest. Unfortunately, this fact creates the foundation for high grain prices for the next couple of years.

Note that if the administrations of large ports by the fall of next year capture and vaccinate, finally, all the movers who live at the berths, thereby preventing the closure of enterprises for quarantine, then the logistical risk, which is now partly attributed to the rise in prices, will be removed from the pricing equation.

Good day to all. A lockdown in Europe awaits us. Those who do not want to use vaccines will be forcefully injected, after which the injected person will be allowed to return to the dream of some kind of democracy and individual rights. It is possible that the violent will be chipped.

Biden doesn’t like oil at $ 80 a barrel. Cries for help are heard from the White House. Japan, China and India are offered to rectify the situation by printing out their reserves. There are no such appeals to the Europeans, but Europe will help the derailing Biden rating in a different way: it will simply freeze by the end of December for a couple of weeks, or maybe a month.

Drilling activity continues to grow in the United States, which should ultimately allow the Americans to increase oil production by 1.5 million barrels per day in 2022 to almost 13 million barrels in 24 hours.

Most likely, the oil market will be under pressure for the next week. If OPEC sees the threat of a significant drop in quotations, this could lead to the fact that the agreement on a gradual increase in production may be revised in early December. The Crown Prince of Saudi Arabia sees oil in his nightmares for $ 20, as it was in the 20th year. And he hardly wants his dreams to come true again.

By reading our predictions, you could have made money in the soybean market by moving down from 1400 to 1280 cents per bushel.

I like the ruble less and less every week. The couple began to scratch their claws into the wood floor at 75.00. Despite the rise in interest rates, a surplus budget and high oil prices, a grandfather with a mallet is wandering around the skulls and frightening either inflation or confrontation with the West. All this reminds of a saying: we’ve never lived well so there’s no use in starting now.

Rates against the ruble are growing, and the Russian Ministry of Finance is leading the campaign, buying up dollars at 25 billion rubles a day. From this surrealism, the analyst weeps into the fifth handkerchief. But what about the rate of 65 rubles per dollar? Now this will not happen or what? What about fighting inflation by strengthening the ruble? The strong ruble should have led to a decrease in the cost of imported goods on store shelves.

Apparently, we will have to endure a little more. New Year’s tours to Turkey and Egypt are already sold out. We will overcome and massively cope with the horrors of the modern economy there, under the light intoxication of tobacco and alcohol.

Over the past week, the difference between long and short positions of managers increased by 14.5 thousand contracts. The bulls have completely regained control of the market.

Growth scenario: December futures, expiration date December 14. We expect a pullback to 770.0 for a new round of buying. The current levels are not interesting for entering longs on daily intervals.

Falling scenario: for a good short we need the level 900.0. While we are out of the market. Recommendation: 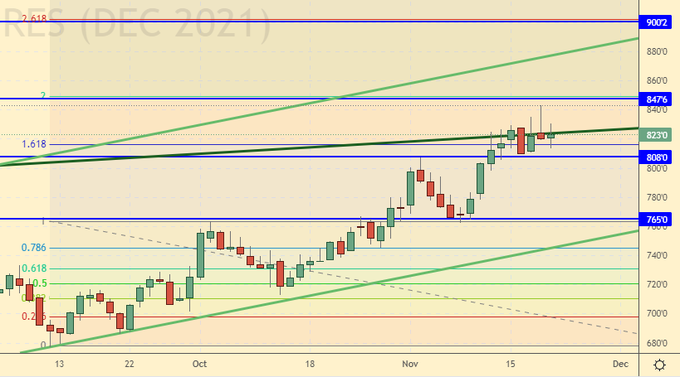 Over the past week, the difference between long and short positions of managers increased by 23.6 thousand contracts. The bulls are in complete control of the situation. Nobody expects cheap corn.

Growth scenario: December futures, expiration date December 14. We continue to hold longs with the target at 593.0. At this stage, the rollback to 540.0 cannot be denied; one must be mentally prepared for this.

Falling scenario: can be sold now. The chances of a move down are not great yet, so reduce your capital risk on this trade. 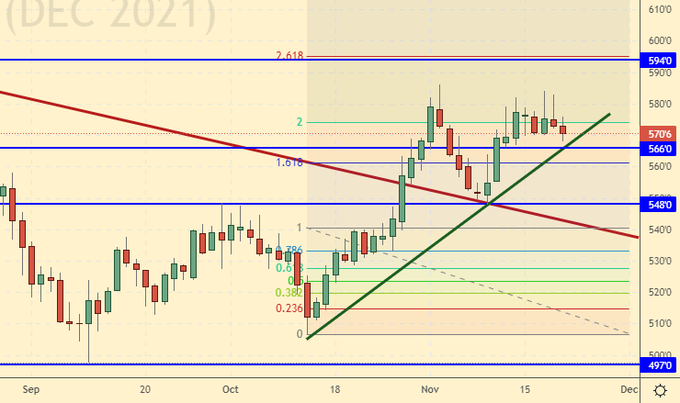 Growth scenario: January futures, the expiration date is January 14. Buying from current levels is interesting, albeit somewhat provocative. As long as the crops do not fall, soybeans will receive support from them.

Falling scenario: we exited the falling channel upwards. It’s a pity, but our sales didn’t reach the target below. We earned less than we could. Recommendation: 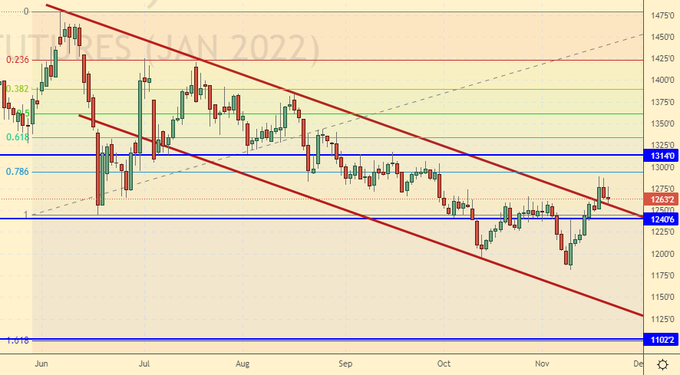 Growth scenario: March futures, the expiration date is February 28. We continue to believe that you can buy only after a rise above 20.70. The second option is to enter long after falling to 18.15. 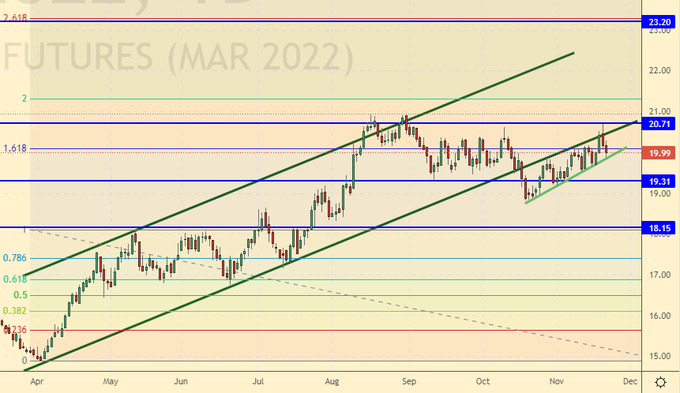 Growth scenario: December futures, the expiration date is December 20. We almost reached our goal at 246.0. The market should touch our target next week. We are waiting.

Falling scenario: when approaching 246.00, we will definitely sell. Only small sales volumes can be made from the current levels.

Over the past week, the difference between long and short positions of managers decreased by 18.6 thousand contracts. Sellers have been building up pressure for three weeks in a row, which ultimately led to the current fall in prices.

Growth scenario: November futures, expiration date November 30. We don’t buy yet. Around 75.00 it will be possible to enter the long, provided that no general lockdown is introduced in Europe.

Falling scenario: keep the shorts open earlier. We can not only reach 75.00, but there are options that we will visit and the level of 60.00. 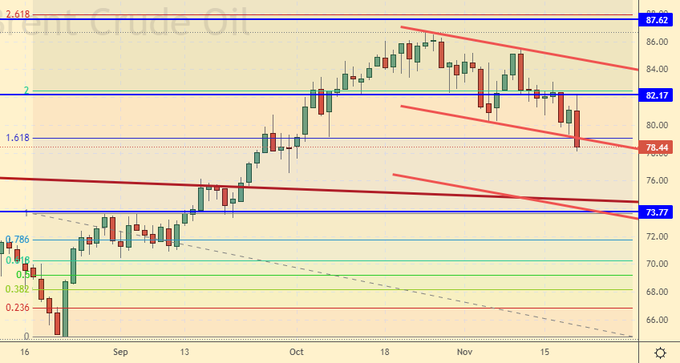 Fundamental US data: the number of active drilling rigs increased by 7 units and is 461 units.

We are looking at the volumes of open interest in WTI. You should take into account that this is data from three days ago (for Tuesday of the last week), it is also the most recent of those published by the ICE exchange.

Over the past week, the difference between long and short positions of managers decreased by 24.5 thousand contracts. A significant exit of bulls from long positions led to a fall in prices. Speculators see no reason to buy at the moment.

Growth scenario: January futures, the expiration date is December 20. The prospect of a move to 70.00 has become quite real. We are waiting for the price movement to this level.

Falling scenario: keep the shorts open earlier. We are capable of reaching 70.00 by the end of next week. Recommendation: 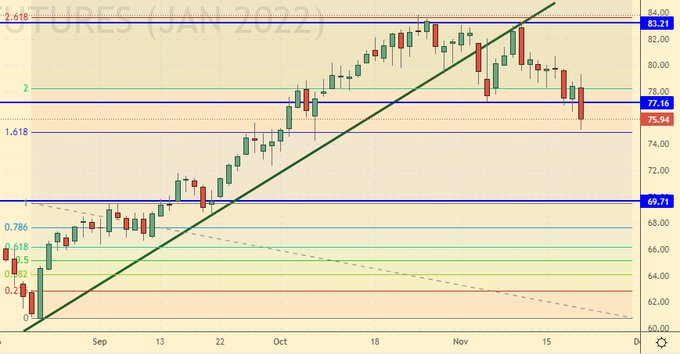 Growth scenario: December futures, the expiration date is December 10. We are waiting for the arrival of prices in the area of 615.00, and there we will think about purchases.

Falling scenario: keep the shorts open earlier. The move to 615.0 is quite real. 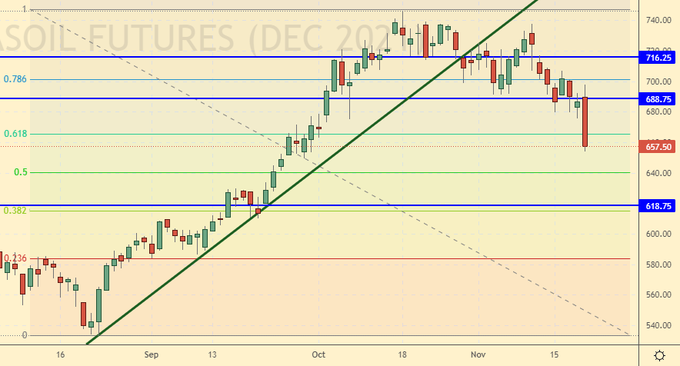 Falling scenario: we don’t believe in short. There is no balance in the energy market. The signing of a new agreement between the EU and Gazprom is being delayed. 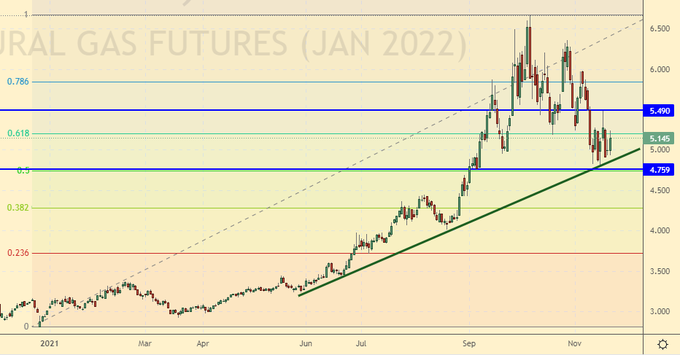 Growth scenario: most likely we will roll back to 1820. Then we will go to 1920. Then we will wait for what the Fed will say at the meeting on December 15th. This is the plan.

Falling scenario: only those who believe the US administration do not like the depreciation of their debts can make sales. The guys got a taste. It is unlikely that rates will rise despite inflation. Recommendations: 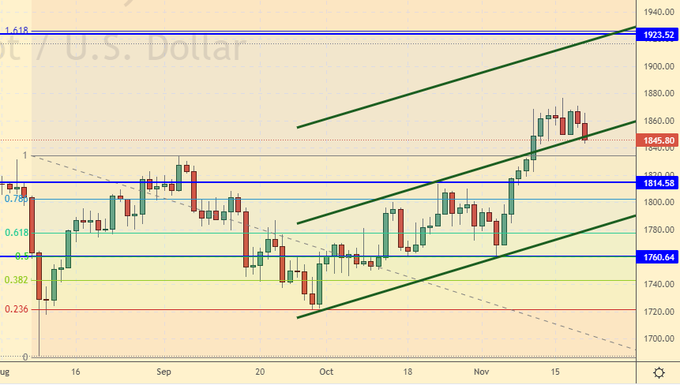 Growth scenario: the euro is bent due to a new wave of infections. In the United States, there are full stadiums and there are no strict restrictions, in Europe everything is much worse, although if you believe the news, then 70% of the population is vaccinated in Germany, but at the same time 65 thousand people are infected per day. We do not buy. 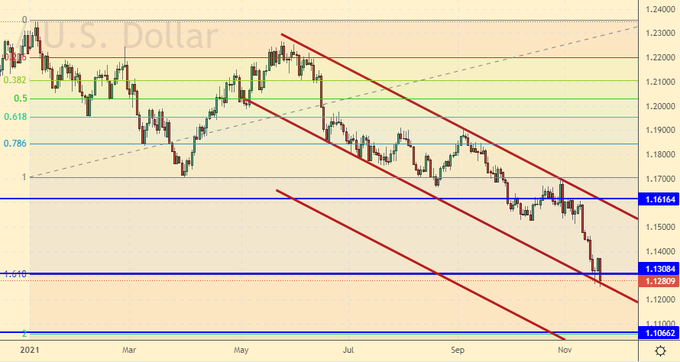 Growth scenario: if oil continues to fall next week, and there are preconditions for this, then the pair will go up. We risk approaching the 75.00 level by Thursday evening. For the national currency, the seemingly good macroeconomic situation is developing very sadly.

Falling scenario: the situation has lost its attractiveness for entering the short within a week. We are out of the market.

Purchase: think after rallies above 74.00. 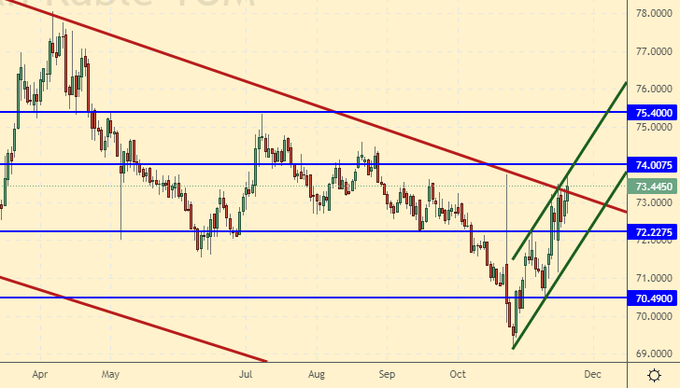 Growth scenario: December futures, expiration date December 16. The index could not hold above 176000 and went down. It is possible that Western investors are dumping Russian securities, as they are preparing for problems at home. We do not buy.

Falling scenario: as well as two weeks earlier, we do not open new sell positions, we keep the old ones. Move to 150,000 is possible. Who wants to take profit, close 25% of the volume in the event that the market stops falling in the first half of the day on Monday.