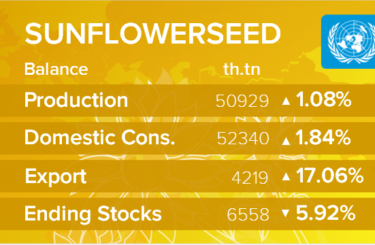 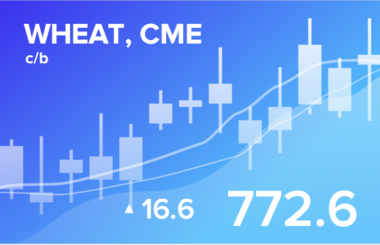 Farmers will clearly not be interested in a quick implementation of the new harvest in the current circumstances. Against the backdrop of accelerating global inflation, it will be extremely reluctant to part with grain. In the summer, Egypt canceled tenders when the price rose by FOB to $ 305 per ton, it seemed expensive. Now he buys at $ 328, excluding freight, which has doubled compared to last year, and nothing, no one complains.

Wheat prices on the Chicago Stock Exchange threaten to rise by 5 percent and reach 800 cents a bushel, and this despite the fact that the wheat harvest is a record in the entire history in terms of volume: almost 776 million tons.

The more cries that the climate is changing, the higher the price of grain will be. This summer and autumn, Europe went sailing in separate regions. If the trend intensifies next year, it could provoke a sharp drop in consumer optimism, which will affect economic growth in the EU. People will stop buying cars and start thinking about wool socks, rubber boots and flour. Prices for the entire range of food products may continue to rise in the medium term.

Citizens, prepare shovels! The whole world will go bury the dollar on Wednesday!

Immediately after the FRS meeting, at the traditional press conference, Mr. Powell will tell us again that inflation should not be afraid, that everything is fine, and almost soon everything will resolve by itself. You see, dear investors, even gold is not growing and is even getting a little cheaper. Remain calm, and for Christ’s sake, don’t sell dollars!

While Biden is driving only 85 cars to Rome for the G20 summit, where the environmental agenda is in the first place, the thinking part of the planet, and this is exactly you and me, is reflecting on what the Europeans will be heating their houses this winter: Russian gas or American currency.

The matter has gone so far that further on our agenda there is only one question: should a country sell its goods for US dollars in particular, or in general for any fiat currencies? The Fed just prints money, everyone else enjoys inflation and falling living standards.

Some fearful articles on the topic of oil for $ 100 appeared on the Internet in the western segment. What are you afraid of? Print more money and buy your gallon of gasoline, but what the energy exporters will do with all this virtual junk is not clear. It is impossible to throw this money into the domestic economy, since inflation will only accelerate, and keeping it in accounts is also of no use, since it will depreciate.

Russia may have to buy something from someone with super profits. A piece of land, for example. The one on which the FRS building stands, since there is no end in sight to the eccentricity there. In 2020, $ 9 trillion was pumped into the American economy. In 2021, if the initiatives of Biden and the left pass, another 8 trillion will be thrown in. Total: the total GDP of Russia for 4 years will simply go to some aunts and uncles for candy. Everyone will have to do something about it. And the simplest thing is to take shovels and bury the dollar.

The rise in the rate to 7.5 percent in the Russian Federation forced the holders of bonds with lower yields to get rid of them, go into cash and wait for much more advantageous offers from the Bank of Russia in the form of new OFZ issues. Strategists are already looking at yields of 8.5%, or even 9% on debt securities, since inflation in the Russian Federation will clearly not be lower than 8% this year, and Nabiullina is very determined.

If Powell does not hint at tightening monetary policy on November 3, then the dollar / ruble pair at current oil prices, which, we recall, are above $ 80.00 per barrel, will be able to go to the 65.00 level. And there, even up to 67 kopecks for one US dollar is not far away.

Over the past week, the difference between long and short positions of managers decreased by 7.9 thousand contracts. At the same time, the number of sellers is falling, while the number of buyers is growing. We see that the growth of the market above 750.0 cents per bushel was an unpleasant surprise for some of the sellers.

Growth scenario: December futures, expiration date December 14. The market is heading towards 815.0. Stops are not excluded along this path, but in general the picture is bullish with no signs of a reversal.

Fall scenario: we will sell only when we approach 815.0. It is unlikely that we will go even higher without a downward corrective move. Recommendation: 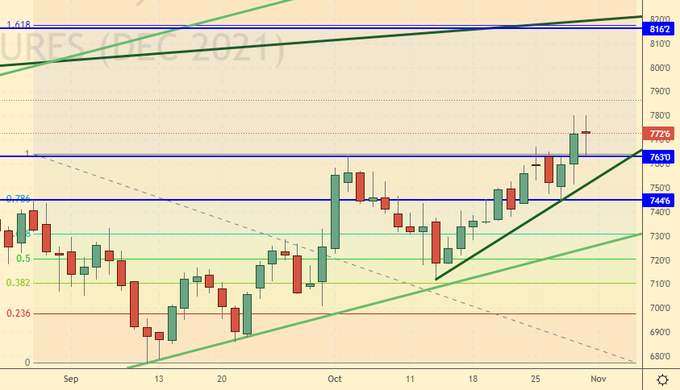 Over the past week, the difference between long and short positions of managers increased by 23.6 thousand contracts. The sellers have disappeared. The market has no choice but to move to growth. Against the background of a record harvest, prices are pushed up by two factors: inflation and expectations of an increase in the processing of corn for ethanol.

Growth scenario: December futures, expiration date December 14. A week ago we bought it, then added it to the longs in the course of the development of the plot at 555.00. We keep longs. Falling scenario: the market did not begin to fall, although bearish preconditions were against the background of soybeans losing in price. We do not sell. 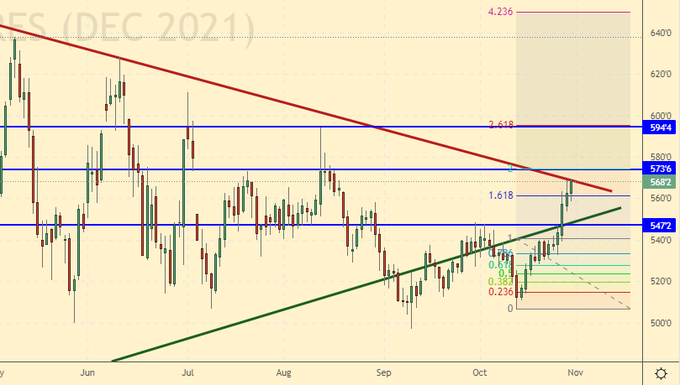 Growth scenario: January futures, expiration date January 14. The chances of a fall remain. Despite the rise in the grain market, we will not buy now.

Falling scenario: hold the shorts. The current corrective growth can be used to build up positions. 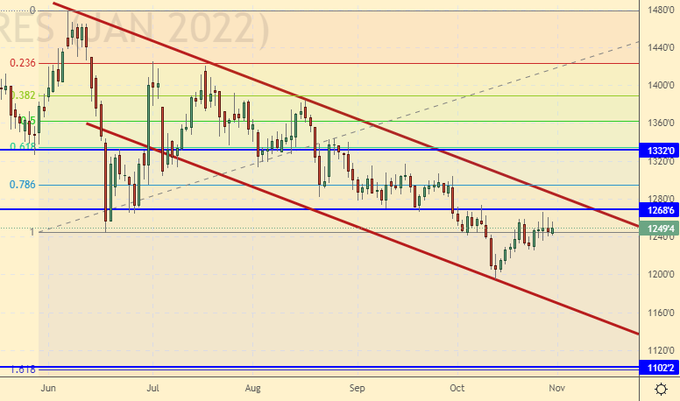 Growth scenario: March futures, the expiration date is February 28. The probability of a move by 18.15 is very high. We will buy when we approach this level.

Falling scenario: here you can strengthen the previously opened short. Most likely the market will continue to fall. 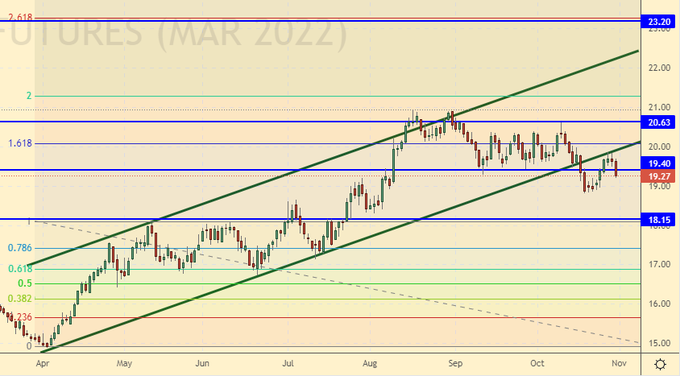 Growth scenario: December futures, the expiration date is December 20. The bulls continue to control the situation. We keep longs. We really want to see the move at 244.00.

Falling scenario: sell after the rise to 244.00, it is also possible to enter short from the current levels. The chances of a fall are small, so we put a stop order close to the entry point. 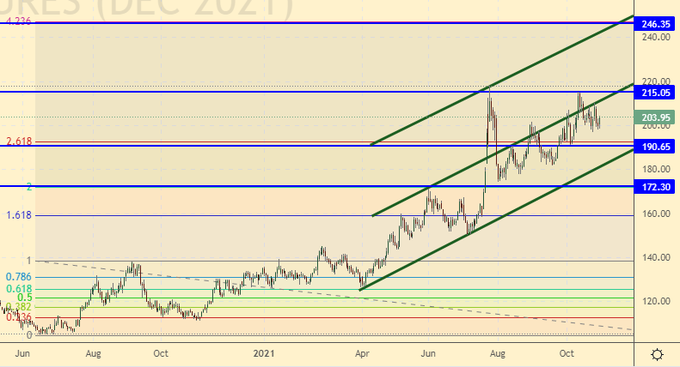 Over the past week, the difference between long and short positions of managers decreased by 9.2 thousand contracts. There are slightly more buyers on the market, however, there are also sellers whose role will increase as prices rise.

Growth scenario: November futures, expiration date November 30. We left the long at 83.10. We do not open new buy positions.

Falling scenario: we will sell when approaching 88.00. The second option is selling after falling below 82.00. 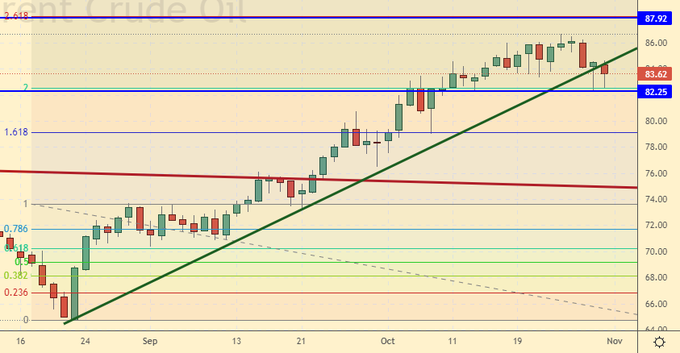 Fundamental US data: the number of active drilling rigs increased by 1 unit and is 444 units.

We are looking at the volumes of open interest in WTI. You should take into account that this is data from three days ago (for Tuesday of the last week), it is also the most recent of those published by the ICE exchange.

Over the past week, the difference between long and short positions of managers decreased by 9.9 thousand contracts. Both buyers and sellers chose to reduce their positions in the market. We note the growth of uncertainty and the lack of ideas for this instrument.

Growth scenario: December futures, expiration date November 19. I would like to see a breakthrough at 98.00, but a much quieter and more likely option would be a fall in prices to 75.00, after which the growth may continue.

Falling scenario: we will sell. Short from the current levels is of interest, primarily from a technical point of view. 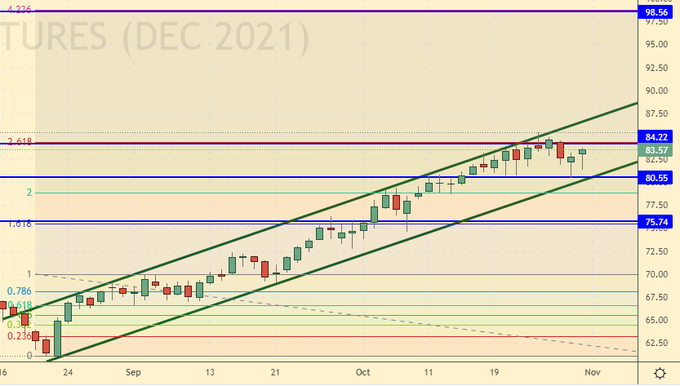 Growth scenario: November futures, expiration date November 11. The market cannot gain a foothold above 750.00. We continue to wait for a good rollback to enter the long. 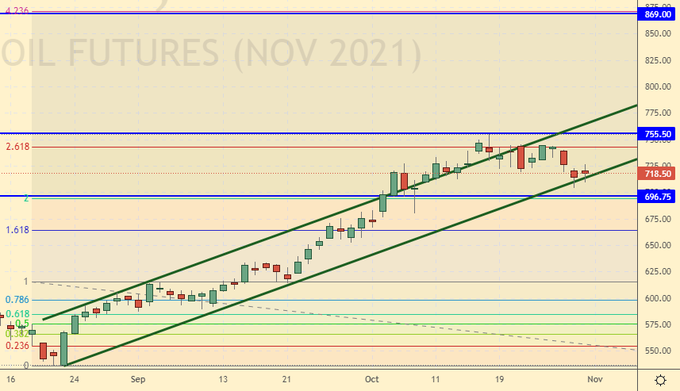 Fall scenario: despite the fact that the gas situation in Europe tends to normalize, it is rash to say that gas prices will turn down on the eve of winter. We do not sell. 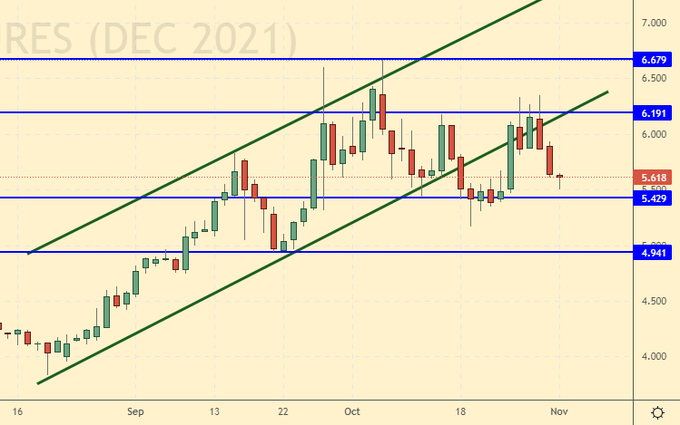 Growth scenario: the situation is extremely confusing before the Fed meeting. Now the bulls have a microscopic advantage, but if another red candlestick appears, the same as on Friday, it will break the market.

Falling scenario: we will sell only if the market falls below 1733.0. The dollar is unlikely to be strong in the coming months. 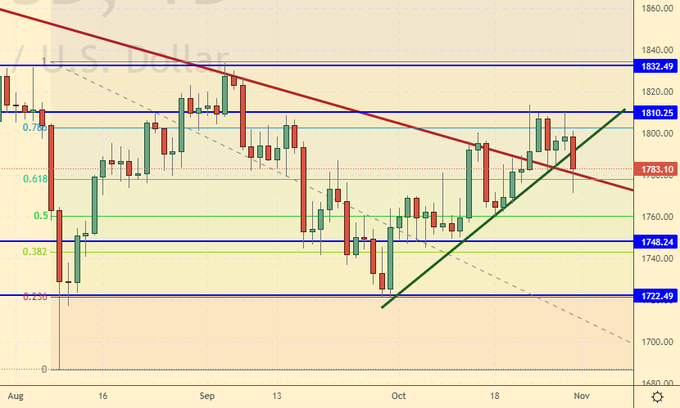 Growth scenario: the bulls failed to break above 1.1700, which led to a strong pullback. While the dollar bulls keep the situation under control. The move to 1.1300 is possible.

Falling scenario: we will keep the short open last week. Moves to 1.1310 and 1.1060 are possible. Recommendations: Purchase: no. 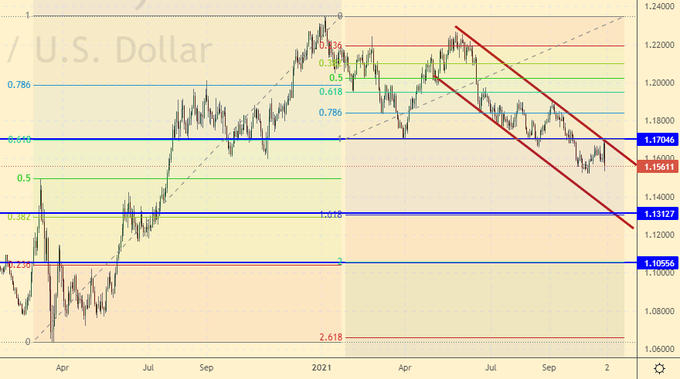 Growth scenario: we do not believe in the current growth of the dollar against the ruble. Much will depend on what Mr. Powell says on Wednesday. In general, in the current macroeconomic situation, the national currency should not fall.

Falling scenario: here you can sell dollars against the ruble. When approaching 72.00, you can strengthen the short. It is possible that the best tactic will be to stay out of the market until the Fed meeting on Wednesday. 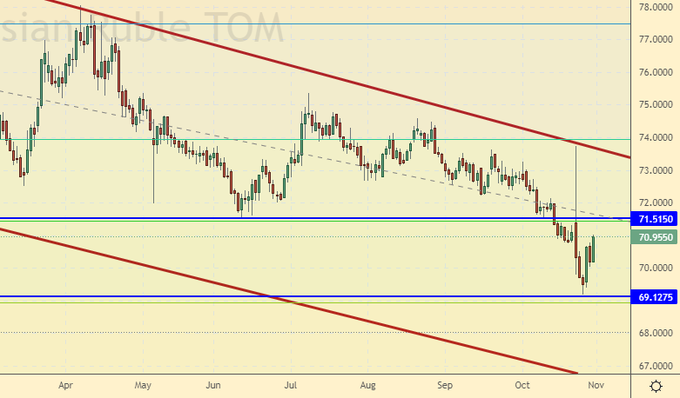 Growth scenario: following the fall of the ruble against the US dollar, the RTS index also fell. In the near future, it cannot be ruled out that the national currency will continue to grow due to the favorable external background, which will send the RTS index to the level of 215,000. It is possible that this target will be a task for the “Christmas rally” in the market in December. To enter the long, we are waiting for upward reversal signals.

Falling scenario: those who wish could previously sell from 190,000 and from 1,927,000. Now we need to be patient and wait. We do not open new sell positions. 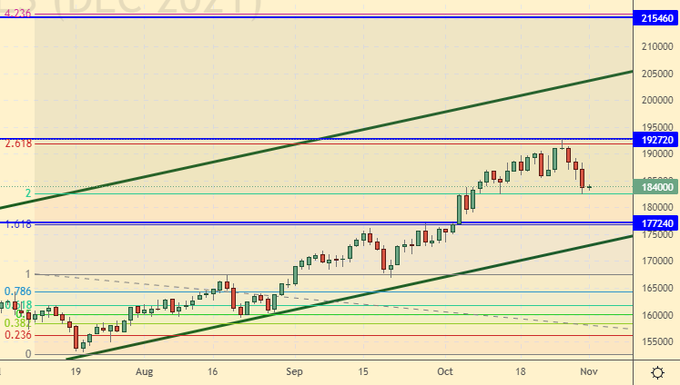