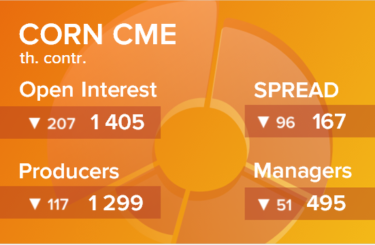 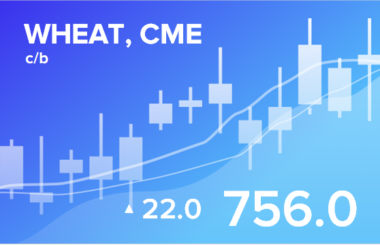 In Europe, plants for the production of nitrogen fertilizers have stopped working. Natural gas has become too expensive. The deficit of nitrogen fertilizers in European countries is predicted in 2022 at the level of 7 million tons and they will have to be taken somewhere. If there are no fertilizers, there will be no normal harvest. Companies based in the Russian Federation, Eurochim, Acron, Uralchem and others, will be in a more advantageous position, but they are unlikely to be able to cover the entire European deficit, which will lead to a strong increase in prices for these products.

Europe can count on natural gas at a reasonable price, about $ 400-500 per 1000 cubic meters, now only in the spring, since the deficit at the moment is 70 billion cubic meters. Even the launch of the second branch of Nord Stream 2 will not be able to solve the accumulated problems. No gas — no fertilizers. No fertilizers, no harvest.

In the current circumstances, when the price for fuel and fertilizers is growing, we do not see any reasons for a strong price rollback from the current levels in the grain market.

Reading our forecasts, you could make money on the WTI crude oil futures, taking a move up from 73.20 to 83.76 dollars per barrel.

Oil continues to remain at its maximum levels, which increases the concern of some economists, as high oil prices will slow down the development of the global economy. The only way to improve the macroeconomic situation in the West and justify the injections of huge sums of money which is not yet earned is to show sustainable economic growth in the near future. If it does not exist, then this will lead to an increase in inflation and a drop in living standards, which, in fact, is already happening, since the money supply must correspond to the volume of goods and services produced. Therefore, the rise in oil prices at this stage is extremely harmful for the West, but very acceptable for the East after the terrible year 2020.

Gas prices in Europe have adjusted, but continue to be above $ 1,000 per 1,000 cubic meters, which leads to the shutdown of a number of enterprises that actively use gas in the production cycle. If the situation drags on, then the economic loop will tighten around the neck of mainly Eastern European economies, and the hysterics of the local governments will be replaced by deep disappointment from life as such. Many will resign.

Elvira Sakhipzadovna raised the rate by 75 basis points to 7.5 percent per annum and said that she would continue in the same spirit if inflation does not stop.

Given the rise in energy prices and the high rate of the Central Bank, it can be assumed that the ruble will continue to strengthen against the US dollar. The mark of 68.00 rubles per dollar looks reasonable.

For a stronger strengthening of the national currency, it is necessary that on November the 3d, the Chairman of FRS Powell continues to hypnotize the markets with sweeping passes over the podium.

“We will begin to cut the quantitative easing program, we will raise the rate by the middle of the second half of 2023. It won’t be long to wait. Hope. «

With such a supply, the dollar / ruble pair will be able to reach the level of 65.00. It’s not the Turkish lira to invest in now. Part of the free money will come in rubles.

Over the past week, the difference between short and long positions of managers increased by 9.5 thousand contracts. There are more and more sellers, and buyers are retreating. At the same time, the market is not yet subject to speculators and continues to go up.

Growth scenario: considering the December futures, expiration date December 14. We keep longs. Let’s revise the goals at the top to 815.0. The situation with the growth in the price for fertilizers and fuel is alarming.

Fall scenario: we will sell only when we approach 815.0. While we are out of the market. 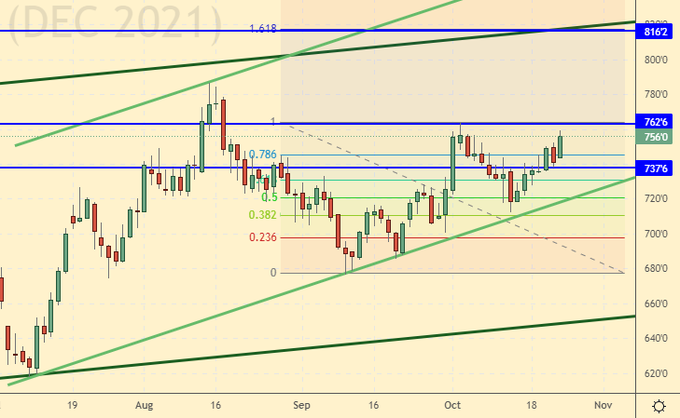 We are looking at the volumes of open interest of corn managers. You should take into account that this is data from three days ago (for Tuesday of the past week), it is also the most recent one that is published by the CME Group.

Over the past week, the difference between long and short positions of managers decreased by 6.6 thousand contracts. At the same time, in balanced conditions and uncertainty, both buyers and sellers left the market.

Growth scenario: considering the December futures, expiration date December 14. You can purchase here. The chances of growth are small, but a stop order can be placed not far away. In case of growth above 555.0, it can be added to longs.

Fall scenario: keeping short is becoming less and less comfortable. Nevertheless, there are still small chances of a fall. 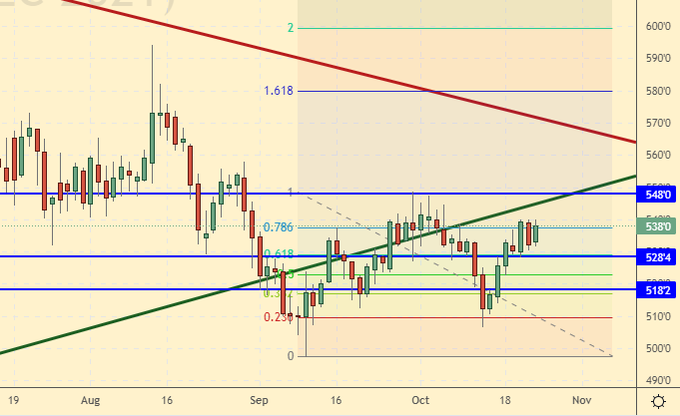 Growth scenario: considering November futures, expiration date November 12. We continue to expect soybeans to decline. We do not purchase.

Fall scenario: hold the shorts. The current corrective growth is somewhat alarming, but the technical picture is for sellers so far. Those who wish at the current levels can increase their position. 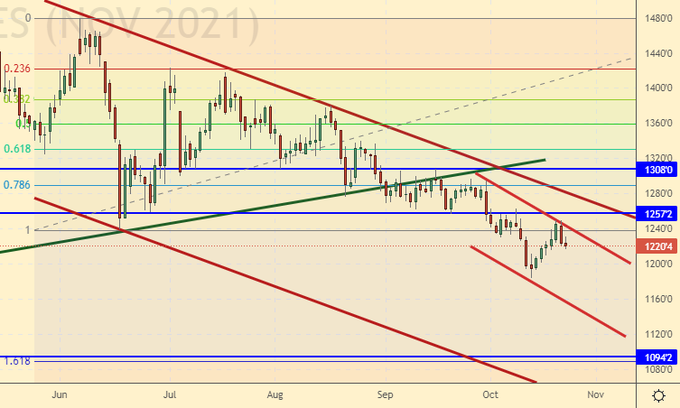 Growth scenario: considering the March futures, the expiration date is February 28. The market chose a move towards 18.15. We will purchase when we approach this level. 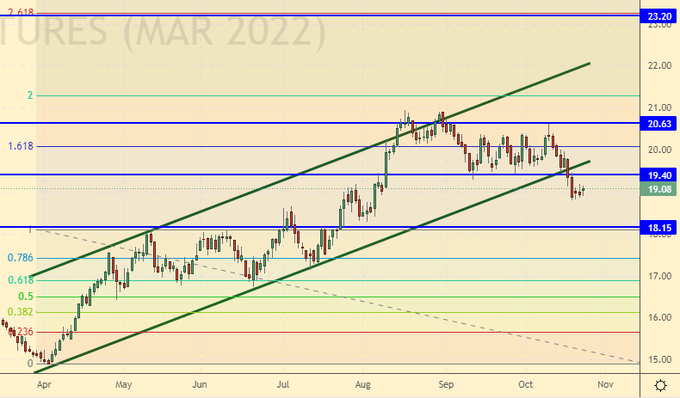 Growth scenario: considering the December futures, the expiration date is December 20. In general, the bulls are in control. We keep longs. We are waiting for 244.0. 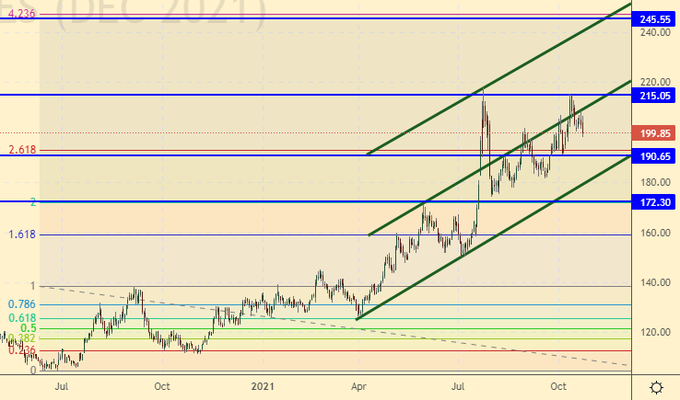 We are looking at the volumes of open interest in Brent. You should take into account that this is data from three days ago (for Tuesday of the past week), it is also the most recent of those published by the ICE.

Over the past week, the difference between long and short positions of managers decreased by 23.9 thousand contracts. There are fewer and fewer people willing to buy at high prices, while the volume of shorts has been growing for four weeks in a row. The market is close to its highs.

Growth scenario: considering the October futures, the expiration date is October 29. We keep long. Our target at 88.00 remains relevant.

Fall scenario: we will sell when approaching 88.00. The pressure from the bears is growing. 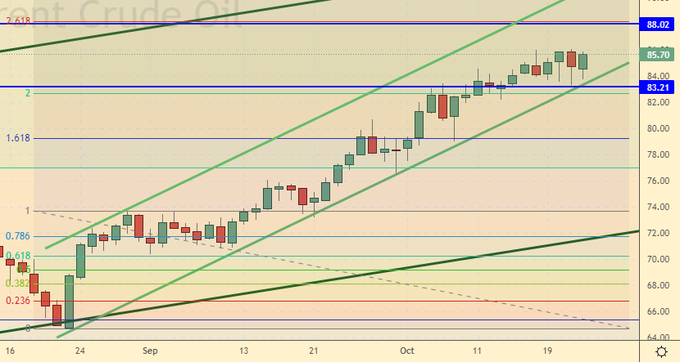 Fundamental US data: the number of active drilling rigs fell by 2 units and now equals 443 units.

We are looking at the volumes of open interest in WTI. You should take into account that this is data from three days ago (for Tuesday of the past week), it is also the most recent of those published by the ICE.

Over the past week, the difference between long and short positions of managers increased by 7.3 thousand contracts. The bulls stopped buying, and at the same time the sellers took a wait and see attitude. The market is in balance.

Growth scenario: consider the December futures, expiration date November 19. The market has almost reached our goal. We will close positions at the current levels.

Fall scenario: we will sell here and now. We place stop orders next to each other. 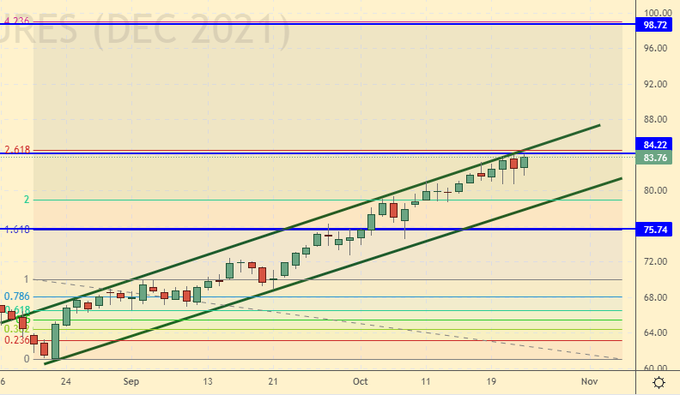 Growth scenario: considering November futures, expiration date November 11. We were unable to climb 750.0. At the moment, out of the market. 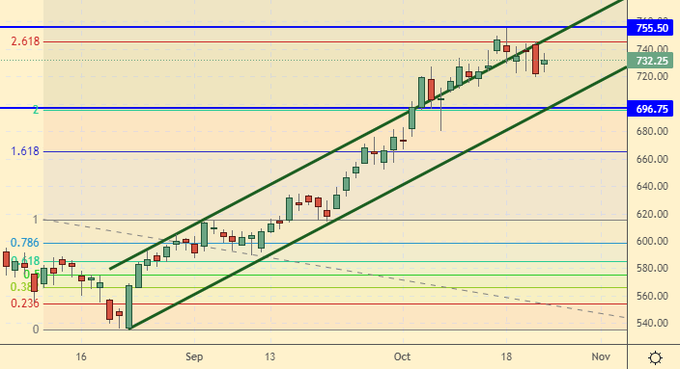 Fall scenario: we will not sell. High gas prices in Europe create a bullish background in the US as well. 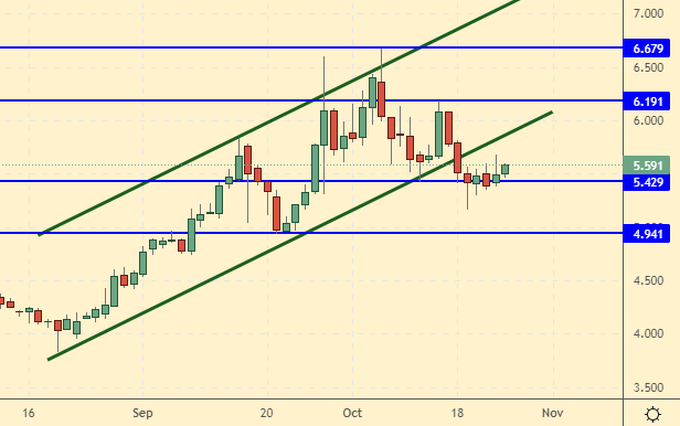 Growth scenario: some of the sectarians, fans of the dollar, are waiting for the strengthening of the American currency, and this prevents growth. Here you will have to enter the long, but the prospects are vague. Reduce the capital risk for this trade by three times the standard.

Fall scenario: only if the market falls below 1740.0 will we sell.

Growth scenario: we will keep longs. We do not open new positions. It would be preferable for the pair to go above 1.1800. 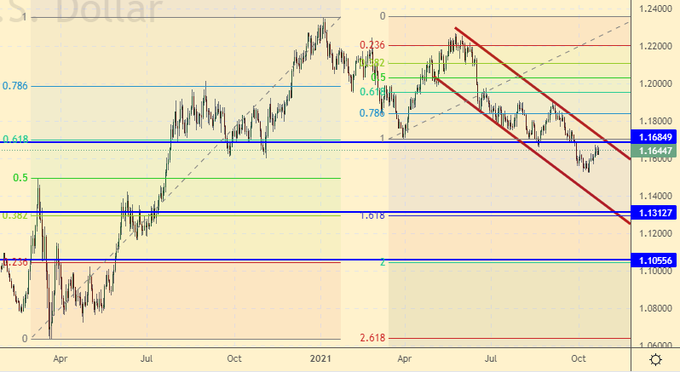 Growth scenario: ruble looks strong. We will purchase only when approaching 68.00 or after signs of a trend reversal appear.

Fall scenario: if the upward shadow on the USD / RUB_TOM pair has closed your positions, then you will have to stay out of the market, since there are no good levels to enter downward now. If you stayed in a position, for example, you are simply preparing rubles to buy dollars at lower levels, then it makes sense to stay in rubles further. Note that there was no upward shadow on futures. If we see a rise in the pair to the level of 72.00, we will sell. 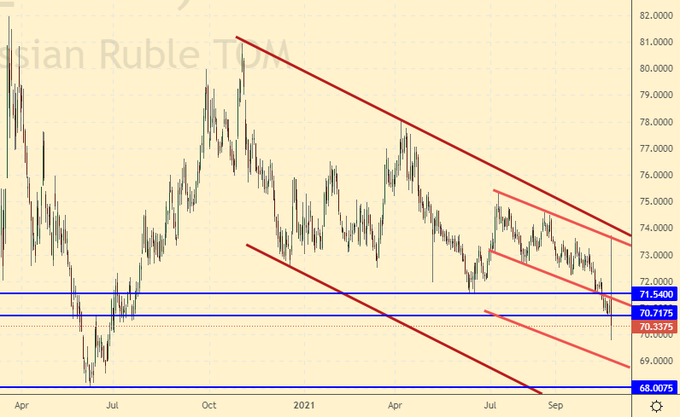 Growth scenario: excellent hydrocarbon prices support the Russian market. The strengthening ruble will continue to have a positive effect on the RTS index. The market is able to touch the level of 193,000. Reaching the level of 210,000 is still unlikely, but it is still possible, provided that oil goes to the level of $ 100 per barrel. 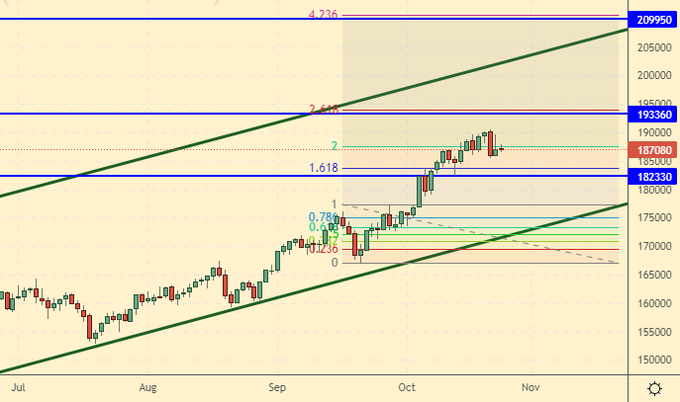