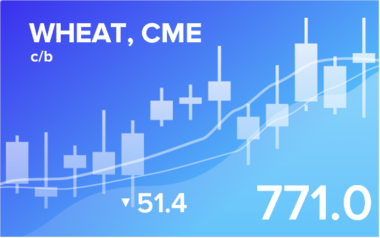 Grain prices inside Russia will be below the market for several months. Sanctions will not allow them to be on par with the market, because of which the Russian Federation will not be able to export the entire planned volume of 50 million tons. There are problems both with ship insurance and with payments for delivered goods.

The story of the drought and its effect on the minds of traders rather than crop volumes is coming to an end. It is already clear that in fact everything will be fine. Fewer tantrums, I would like to wish the writing press.

Without Russian fertilizers, the harvest will decrease in 2023, the UN Secretary General said. And this is actually the truth. When grain prices begin to rise in September, the fear of a lack of fertilizer will be a great help for a bull market.

This fall, the world will choke on lies. The process has just begun, but it will gain momentum.

There is a shortage of gasoline at gas stations in the US, but the Biden administration says that there is a lot of gasoline, as they do not need a price increase before the congressional elections. At the same time, oil refineries do not stop and receive super profits.

This lie about the abundance of gasoline was found by analysts themselves in the United States itself. Practice on the ground does not match the official statistics. There is nothing surprising in the fact that oil prices continue to hover around $100 per barrel. In fact, Americans need more fuel.

In Germany, at the beginning of the summer, there was no gas in the storage facilities, and after three months they are talking about the fact that now they have gas before winter. Where? They say they were brought from Norway. But Norway declared back in the spring that they had no gas and that they had nothing to help Germany with. And Qatar has said that it will sell gas to Italy, but not to Germany. So where do you get gas from, Herr Scholz?

The Poles said that they were 100% provided with gas and that they would pass the winter without problems; their friends from America brought it to them in metal balls on boats. Forgetting to add that we are forced to turn on coal-fired thermal power plants to full capacity.

There is nothing surprising in the fact that gas prices in Europe are already approaching $3,000 per 1,000 cubic meters. The lie will go on until the last day, and on the last day, somewhere in February, the water in the pipes will freeze in Europe.

In Germany and Switzerland, people were openly warned that if they rebelled, it would not end well for them. Rebellion, just think, now it is a threat to democracy. And before, rebellion was a threat to the power of stupid landlords. It will not be surprising that the governments of Germany and France will fall.

God save the queen, at least there is order in Britain. They simply said that they would not pay a communal apartment, but they did not promise to go out into the street yet.

The government, the Central Bank and commercial banks are forcing legal entities and private entrepreneurs to get rid of the American and European currencies. They do this with the help of a tariff policy and threats of non-fulfillment of their own obligations to customers.

Businesses need to behave wisely and switch to settlements in yuan. Moreover, the trade turnover with China in 2021 reached 140 billion dollars, and in 2022 we can see a figure of 200 billion dollars.

The ruble is still strengthening despite sanctions, threats and cries from across the ocean. The trade balance remains positive. The main thing is that we do not block the remaining foreign currency accounts, on which the proceeds received are deposited, otherwise it will be sad for the second time, honestly. As when 300 billion dollars in the accounts of the Central Bank was blocked in the United States. There was money and not. And that’s it.

Over the past week, the difference between long and short positions of managers has decreased by 2.3 thousand contracts. Both buyers and sellers enter the market, but in small volumes.

Growth scenario: consider the December futures, the expiration date is December 14th. Until the market rises above the level of 850.0 cents per bushel, we will not buy. We will buy with pleasure from the level of 650.0, but we still need to fall to it.

Fall scenario: we hold the previously open shorts. Support on 740.0 is important. If it is broken, then we will go down another hundred cents. 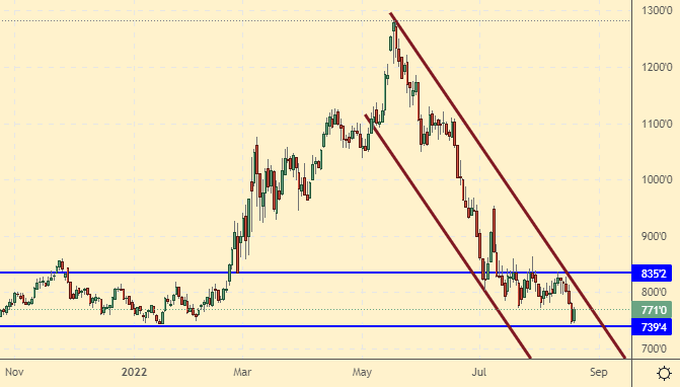 Last week the difference between long and short positions of managers increased by 7.9 thousand contracts. Both buyers and sellers enter the market in small numbers, but there are slightly more buyers.

Growth scenario: consider the December futures, the expiration date is December 14th. For now, let’s give up trying to go long. Only after the growth above 650.0 will we talk about purchases.

Fall scenario: according to our recommendations, you should have gone short around 630.0 cents a bushel last week. We hold positions. We expect the fall to continue.

Growth scenario: we are considering the November futures, the expiration date is November 14th. So far, we correctly interpret what is happening in the soybean market. Growth here is not obvious. Out of the market.

Fall scenario: holding shorts. There will be plenty of soy. Fear of the heat in the United States turned out to be hypertrophied. 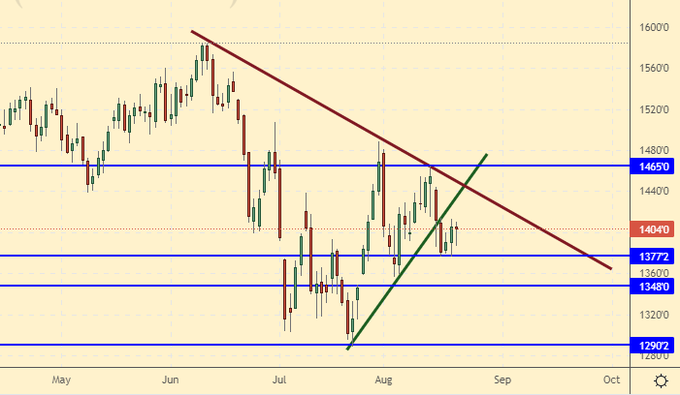 Growth scenario: consider the October futures, the expiration date is September 30th. The market is in balance. We don’t buy anything.

Fall scenario: we continue to insist on sales. Waiting for the fall. 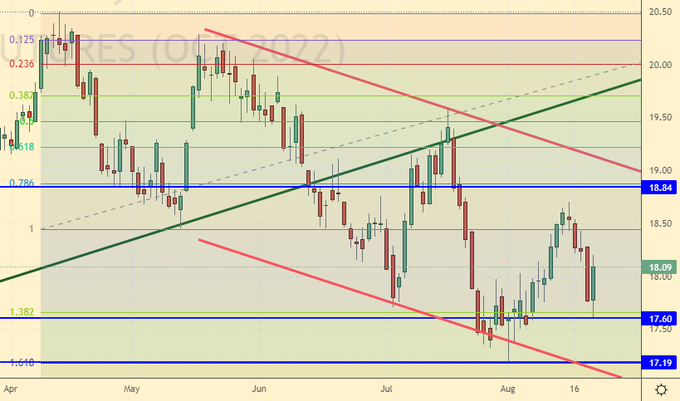 Growth scenario: we are considering the September futures, the expiration date is September 20. Market growth is not obvious. We continue to refrain from shopping.

Fall scenario: holding shorts. We are able to go down. 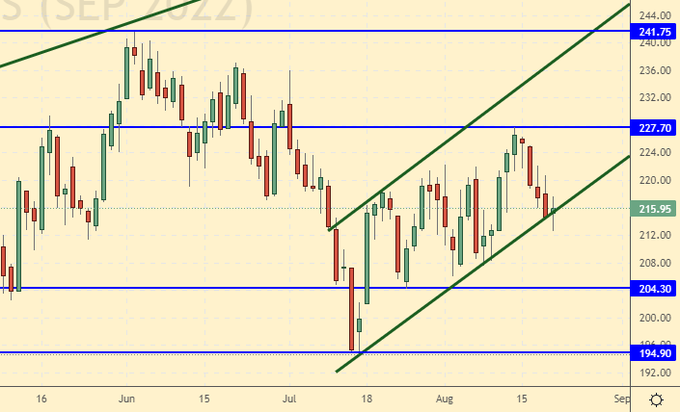 Over the past week, the difference between long and short positions of managers decreased by 12.7 thousand contracts. Sellers continued to enter the market, while the number of buyers slightly decreased.

Growth scenario: switched to September futures, expiration date 30 September. As long as we are below $100.00 per barrel, there is no point in buying. Out of the market.

Fall scenario: The market is inside a falling channel. If you are not yet in the market, then you can sell now.

Fundamental US data: the number of active drilling rigs has not changed and is 601 units.

Last week the difference between long and short positions of managers decreased by 14.6 thousand contracts. Sellers have been increasing their positions for four weeks in a row. Buyers leave the market.

Growth scenario: we are considering the October futures, the expiration date is September 20. We will think about buying only after the growth above the level of 96.00 dollars per barrel. While out of the market.

Fall scenario: nothing has changed for sellers in a week. We continue to keep the shorts. Those who wish can sell here. 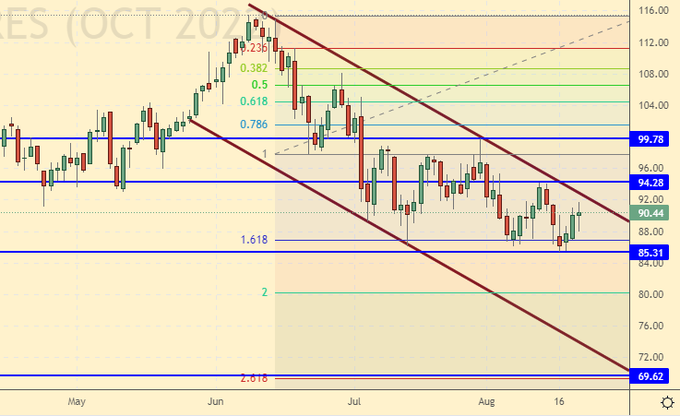 Growth scenario: we are considering the September futures, the expiration date is September 12. We continue to refrain from shopping. Only after the growth above 1115.00 will we try to go long.

Fall scenario: if the market returns below 1040.00, we will sell again. 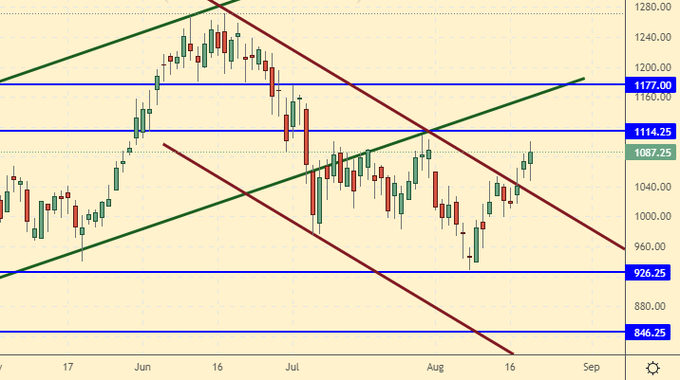 Growth scenario: switched to October futures, expiration date 28 September. We continue to hold longs. Nothing good will happen in Europe this winter. In America too.

Fall scenario: do not sell. The world will fight for gas contracts. The Emir of Qatar cries for joy every day.

Growth scenario: The dollar index strengthened last week amid expectations of a rate hike by the Fed. We don’t buy.

Fall scenario: last week it was good to go short, we recommended. Now we stand, waiting for the fall by 1615.

Growth scenario: the pair will not grow yet. Before the Fed meeting in September, the euro will plunge under the level of 1.0000.

Fall scenario: our sales were strong last week. The position looks good. We are waiting for the continuation of the fall. 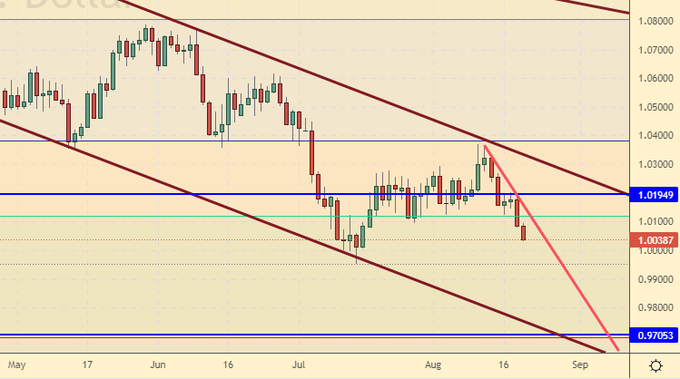 Growth scenario: the pair is able to drop to the level of 56.50. Going even lower will be extremely difficult. If we reach this mark, we will buy.

Fall scenario: you could have sold last week from 58.80 as we recommended. It is not worth strengthening the position here. We will keep shorts in anticipation of the collapse of the dollar.

Growth scenario: FOSAGRO announced a dividend payment. This story supported the market, but did not turn the tide in favor of the bulls. The entire growth of the RTS index is associated so far with the strengthening of the ruble. Note that we have consolidated above the level of 110,000 points, and this creates prerequisites for further growth.

Fall scenario: let’s move the stop order to the level of 114100 and continue to hold the shorts. The situation is unpleasant, but still acceptable. The chances of falling remain. 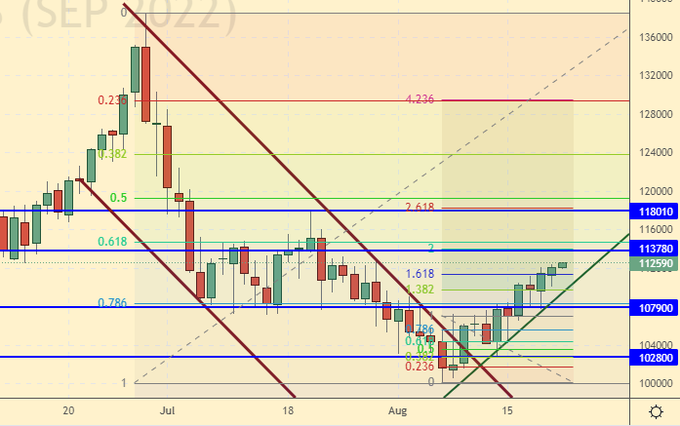