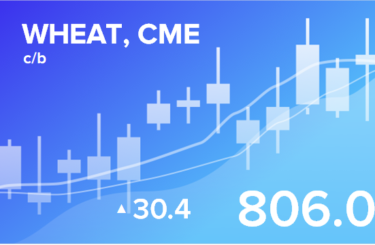 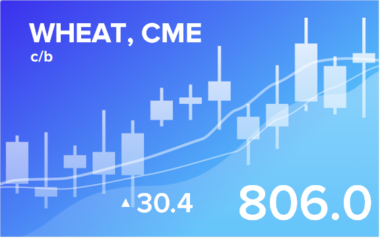 The impact of drought on the gross harvest of major crops was minimal, almost none. There will be no food problems either in 2022 or 2023.

But still found: ketchup has risen in price in the USA. Yes, now this is a new national problem. Turkish President Recep Tayyip Erdogan immediately felt how the tomato plantations he owns, yielding a crop two or three times a year, began to rise in price.

It will be extremely difficult for the grain market to rise up. There is a high probability that we will see another attempt to go down in both wheat and corn before the end of August.

The Americans are flying to Taiwan again. After looking at the sluggish reaction of China, Washington decided to raise the degree. Now a whole military plane full of politicians is heading for the island. If there is no active opposition from the Celestial Empire, then in a couple of months we are waiting for the ban on communist ideology and the American police on the streets of Beijing.

American analysts admit that if gas supplies from Russia to Europe are not resumed, they will have to burn wood, and possibly old magazines. There will be enough gas until November, and then everything. Cold and damp. But you can’t imagine how antipyretics will be dismantled in pharmacies. A gram of aspirin will cost the same as a gram of cocaine. The people will get sick. Not everyone will survive.

In this situation, there will be popular riots in Europe in the fall. Already about 100 thousand English families have declared openly that they will not pay bills for an apartment from October. Their motive: «Why would we give our money to those who do not think about their people.»

Expensive gas will support the oil market. But, for the time being, we are unlikely to expect a surge upwards to the level of 120.00 dollars per barrel for Brent oil. Rather, we will decline slightly, to begin with, to the level of $90.00 per barrel.

On Monday, foreigners from friendly countries should come to the Russian bond market. They were allowed. The basic scenario is simple: a sell-off of Russian debt securities will begin. The national currency should weaken somewhat against the dollar, as foreign investors will sell the rubles received from the sale of bonds and buy the US currency.

There is a possibility that the Central Bank will not interfere in the situation and will calmly watch how the ruble weakens.

Over the past week, the difference between long and short positions of managers increased by 5.2 thousand contracts. There is some pressure from sellers, but it has no effect on quotes yet.

Growth scenario: consider the September futures, the expiration date is September 14th. We continue to think that it makes no sense to think about buying while the market is below the level of 850.0 cents per bushel. Out of the market.

Fall scenario: we will sell from current levels. Market growth is not convincing. Good fundamental data on the gross harvest of wheat should put pressure on prices. 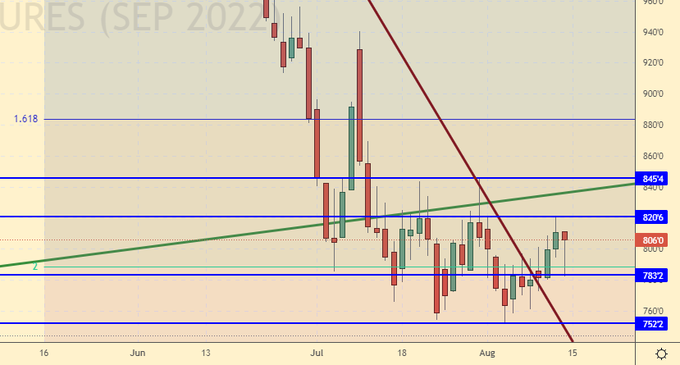 Last week the difference between long and short positions of managers increased by 16.7 thousand contracts. Approximately how many sellers left the market, so many buyers entered. It is possible that these were the same people who changed their view of the development of events.

Growth scenario: consider the September futures, the expiration date is September 14th. We will keep previously open longs from the level of 625.0 cents per bushel. The position is not the best, so we will tighten the stop order.

Fall scenario: in this area it is necessary to sell. We are waiting for the appearance of a red daily candle and enter the short. 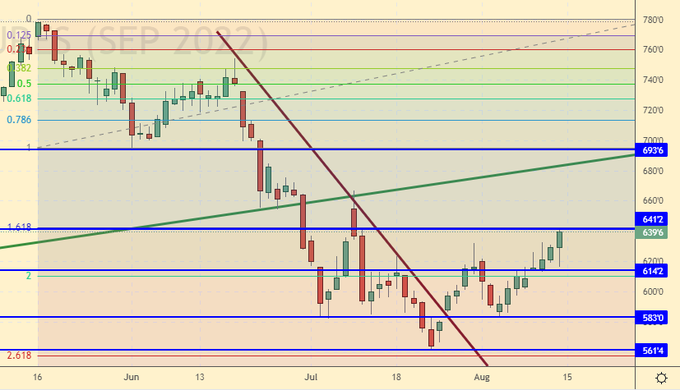 Growth scenario: consider the September futures, the expiration date is September 14th. The current rise looks optional. Out of the market.

Fall scenario: holding shorts. Those interested can sell here. The story of the growing soybeans is distrustful against the backdrop of USDA data. Recommendations for the soybean market: Purchase: no. 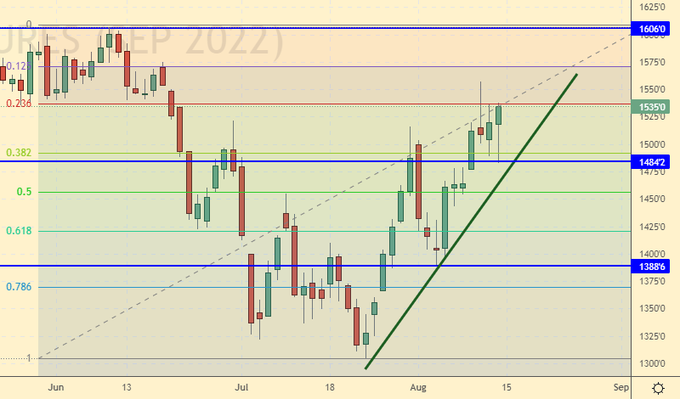 Growth scenario: consider the October futures, the expiration date is September 30th. And we took it, and suddenly grew. While out of the market.

Fall scenario: continue to hold shorts. We believe that the market may leave at 15.20. You can sell from current levels. 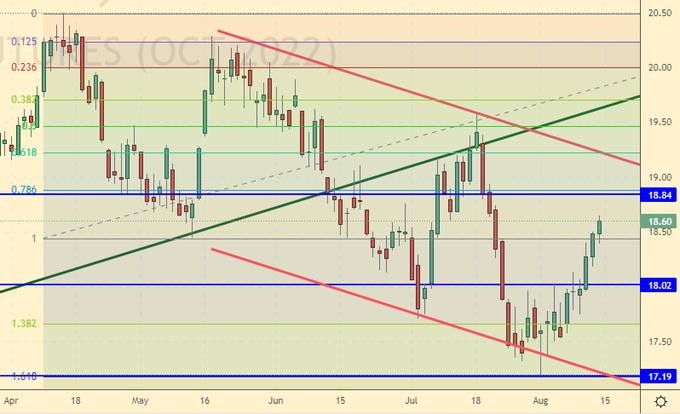 Growth scenario: we are considering the September futures, the expiration date is September 20. Market growth looks optional. We don’t buy.

Fall scenario: we will continue to sell. I do not want to miss the moment of turning down. 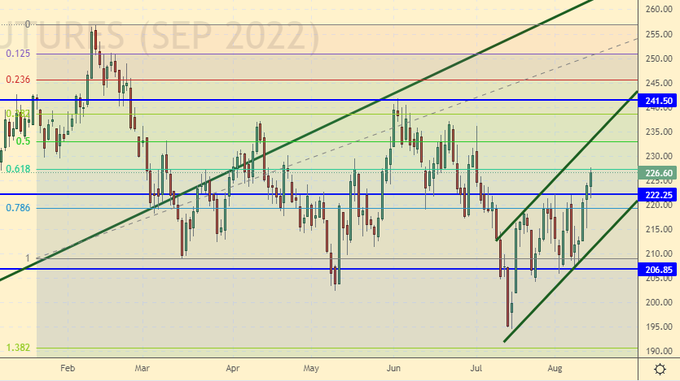 Over the past week, the difference between long and short positions of managers decreased by 20.4 thousand contracts. The buyers retreated, while the sellers tentatively increased their positions.
Growth scenario: consider the August futures, the expiration date is August 31. We see a small rise, but we will not think about buying until we are below $100.00 per barrel.

Fall scenario: sellers here can escalate their aggression. From a technical point of view, the market is capable of falling to the 80.00 level. 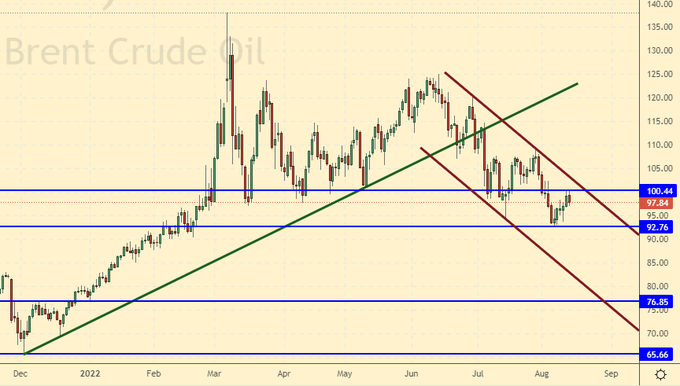 Fundamental US data: the number of active drilling rigs increased by 3 units to 601 units.

Last week the difference between long and short positions of managers decreased by 28.6 thousand contracts. Sellers actively entered the market, bulls massively closed their positions. One more such week and the power in the market will pass to the sellers.
Growth scenario: consider the September futures, the expiration date is August 22. We will continue to refrain from shopping. It is possible that the market settled in a falling channel for a long time.

Fall scenario: continue to hold shorts. Those who wish can increase their positions here. We may fall to the level of $70 per barrel. 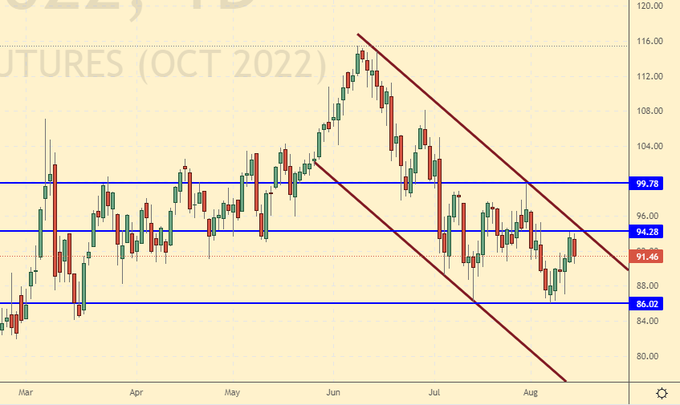 Growth scenario: we are considering the September futures, the expiration date is September 12. Refrain from shopping. Only after the growth above 1115.00 will we try to go long.

Fall scenario: it is worth keeping the shorts open earlier. Those who wish can sell from current levels.

Growth scenario: we are considering the September futures, the expiration date is August 29. We continue to hold longs. There will be an apocalypse in Europe this winter.

Fall scenario: we continue to refuse to enter the short. No one can replace Russia, and Russia has not yet been agreed. 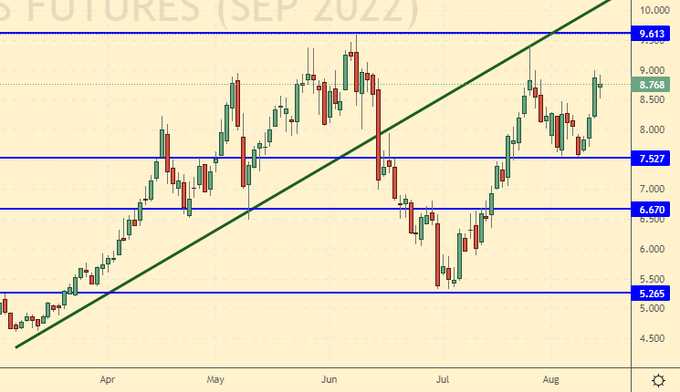 Growth scenario: we can hit in 1830. If this happens, then the bulls may come into the market. If the 1800 area holds out and we move down, then the risk of collapse by 1620 will increase significantly.

Fall scenario: here you can sell, and aggressively. The stop order will be close. 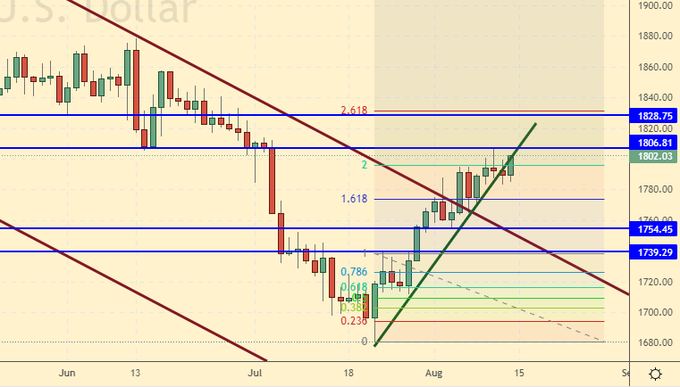 Growth scenario: amid high energy prices, we do not believe in the strength of the euro. We don’t buy.

Fall scenario: it is necessary to sell. We continue to assume that the pair is able to go to 0.9700. 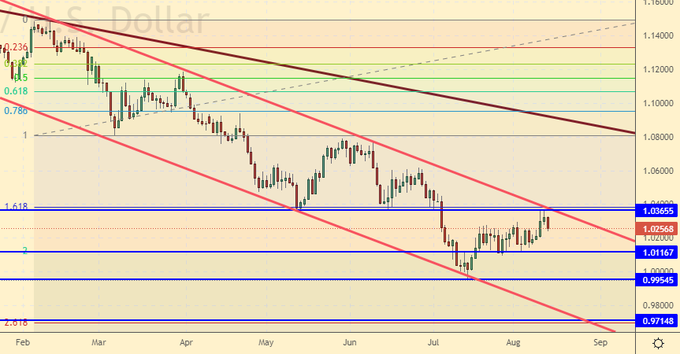 Growth scenario: from the point of view of technology, the ruble remains in a growing price channel. However, he can easily get out of it in one day, so the situation is extremely delicate. Having stood in the range all week, the ruble only increased the state of uncertainty. See how the market opens on Monday, if we start to grow, we can try to go long. If there is a downward movement, then it would be reasonable to wait for the fall to 56.00 and think about buying there.

Fall scenario: if quotes fall below 58.80 on Monday, you can sell. Otherwise, we remain out of the market. We hold the previously opened positions.
Recommendations for the dollar/ruble pair: 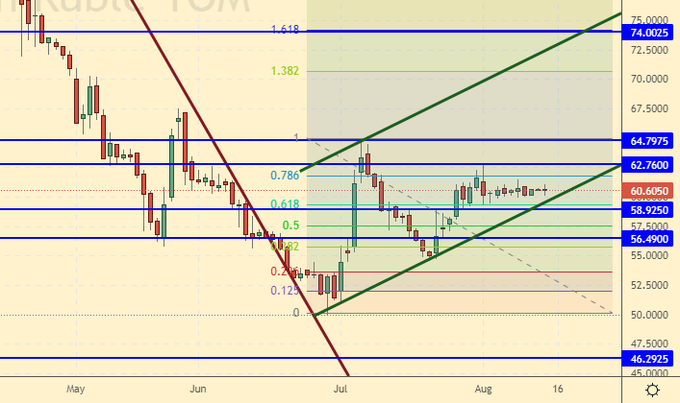 Growth scenario: the Russian stock market can grow only on the money that domestic investors are willing to invest in it. And this money is clearly not much. It is possible to go long in the current situation, but it must be done with an understanding of the risks.

Fall scenario: we will continue to hold short positions. A move to 96,000 and 88,000 points is possible. While we manage to sell raw materials. But it is possible that in the future it will become more and more difficult. 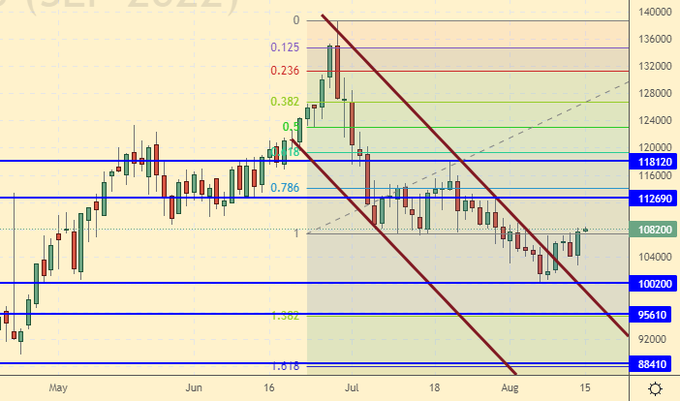