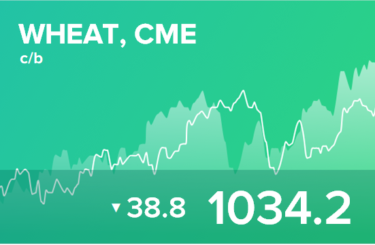 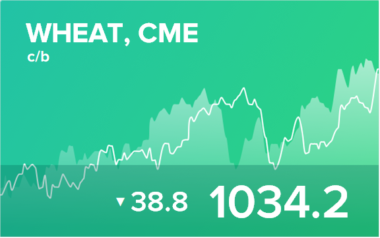 A number of EU countries have begun withdrawing gas from storage facilities, designed to overcome the winter cold. This is how they felt sorry for them. The main thing is not to start eating unripe spikelets from the fields.

Germany and the United States in unison strive to help Ukraine export the grain of the old, and then the new crop. At the same time, they admit that it is unrealistic to transport more than 10 million tons of grain in railway containers before January. However, even this information is capable of stopping the rise in prices and even causing a corrective move both in the wheat market and in the corn market.

Note that with the fall in corn prices, everything is somewhat more complicated, since with the price of one gallon of gasoline at $ 7, it becomes extremely attractive to drive bioethanol out of it. Processing one bushel of corn worth $8 yields two gallons of ethanol worth $15.

It cannot be ruled out that in connection with such arithmetic, corn stocks in the United States will decrease significantly. In general, fatigue and some fragility are felt on the market, we do not deny a possible correction in almost all agricultural crops.

Reading our forecasts, you could make money in the gas market by taking a move down from 9.100 to 7.000 dollars per one million British thermal units.

Will Italy be able to survive the winter without Russian gas — of course. And Germany — definitely yes. There really will be someone left by next spring. And when by 2030 all houses in Europe will be insulated, the population will even begin to grow.

Judging by the statements of officials, Russia is increasing oil supplies to friendly countries and is not going to reduce production. It is now impossible to check this, since the statistics are closed, and it’s okay, we will believe. The strengthening of the dollar led to the fact that oil prices fell on Friday. This version of the fall in prices seems extremely superficial. The main thing is that the President of Russia at the forum in St. Petersburg was neutral in his statements, leaving room for maneuver both for himself and for the West, which suggests the emergence of some agreements in the future on the supply of oil and other goods to Europe.

Two more points should not be overlooked: the extremely low growth of world GDP, which can be expected in the region of 1 percent, and problems with economic development in China. Both could contribute to lower oil demand in the future. But not right now. While Brent black gold is below $100.00 per barrel, it is hard to imagine. The collapsed economy of Sri Lanka will get some Russian oil on credit, at Russian expense. We are kind to them, to these Sri Lankans.

With the slogan “Citizens, the currency of foreign countries is a worldwide evil!”, the country is taking measures to squeeze both individuals and legal entities out of foreign currency positions in banks. Given the current overhang, according to Siluanov, of $130 billion in the foreign exchange market, the ruble has no choice but to continue to strengthen its imperial power. However, bidders doubt the ability of the ruble to strengthen further, for example, by 50.00, since these levels are of no interest to either the Government or exporters.

Market participants are waiting for the Central Bank to further reduce the rate, as well as, perhaps, some liberalization of trade in the currency section, for example, for traders from friendly countries, which will keep the exchange rate above 60 Russian rubles for one US dollar.

Over the past week the difference between long and short positions of managers decreased by 6.8 thousand contracts. The bulls were leaving the market, while the sellers were building up their positions.

Growth scenario: we consider the July futures, the expiration date is July 14. Nothing good happened for the bulls. We continue to refrain from shopping. The situation gravitates towards further price reductions.

Fall scenario: it is possible that you will have to sell from current levels. The move at 860.0 is visible. 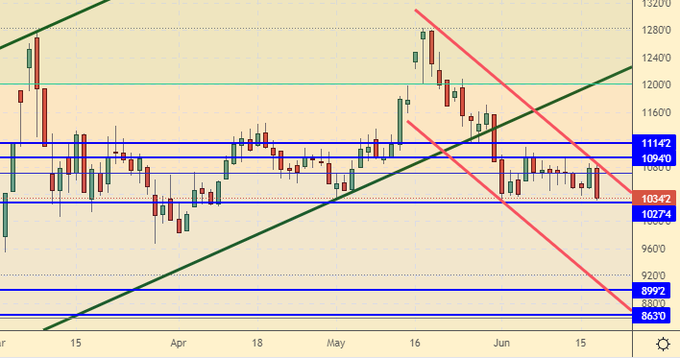 Over the past week the difference between long and short positions of managers increased by 13.6 thousand contracts. Sellers leave not believing in the fall in prices. As long as the market remains bullish.

Growth scenario: we consider the July futures, the expiration date is July 14. We will not buy at current levels. We are waiting for the price to drop.

Falling scenario: the market is in equilibrium. In case of growth to 870.0, it is mandatory to sell. Recommendation: 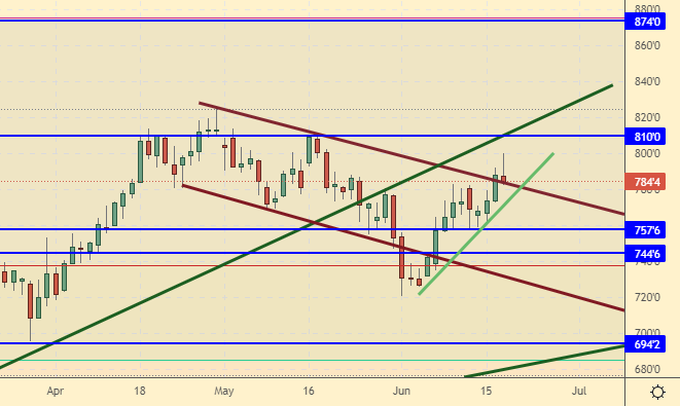 Growth scenario: we consider the July futures, the expiration date is July 14. We continue to refrain from selling. We need a correction. For example, to 1450.0.

Falling scenario: we will keep the shorts open earlier and wait. There are chances of a strong fall. 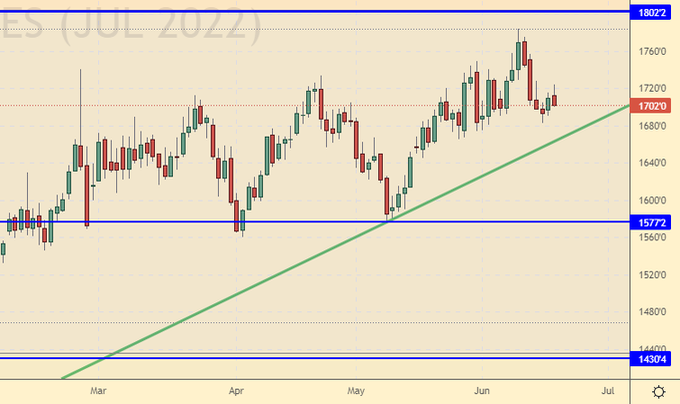 Growth scenario: we are considering the July futures, the expiration date is June 30. We will continue to refrain from shopping. Sugar wants to make the hike by 4:50 pm.

Falling scenario: selling levels are frankly inconvenient. But we will have to go short, as the support line is in danger of being broken. 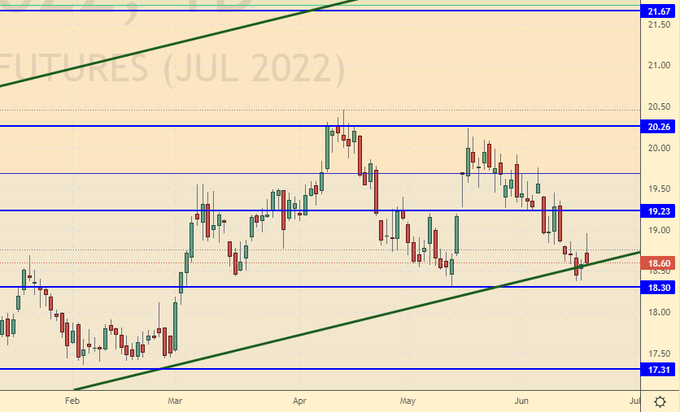 Growth scenario: we are considering the July futures, the expiration date is July 19. It’s a pity, but it looks like the campaign to 250.0 is cancelled. We do not open new positions. Keep the old ones. 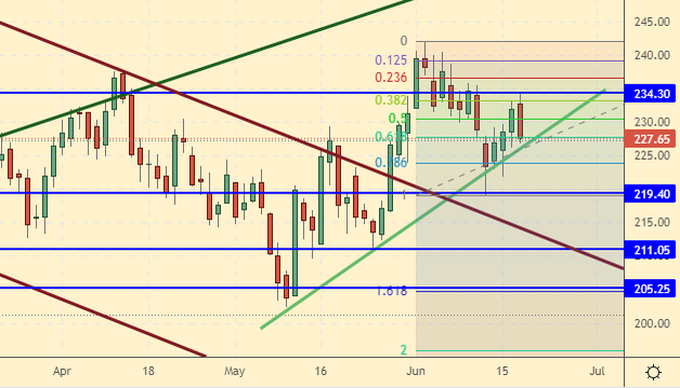 Over the past week the difference between long and short positions of managers increased by 10.6 thousand contracts. Bulls enter the market 5 weeks in a row. Overbought can lead to a corrective move.

Growth scenario: we consider the June futures, the expiration date is June 30. Bulls fail to break above 125.00. We take a break for a week. 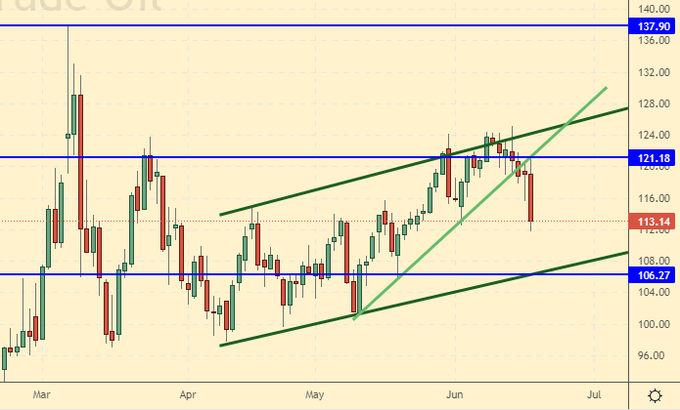 US fundamental data: the number of active drilling rigs increased by 4 units and now stands at 584 units.

Over the past week the difference between long and short positions of managers decreased by 13.6 thousand contracts. We see that, unlike Brent, a group of sellers entered the market. Increased bearish pressure cannot be ruled out.

Growth scenario: we are considering the August futures, the expiration date is July 20. Let’s take a break for a week and see how things unfold.

Fall scenario: if the market returns to the area of 115.00, you can sell. News chains that will lower prices cannot be ruled out. 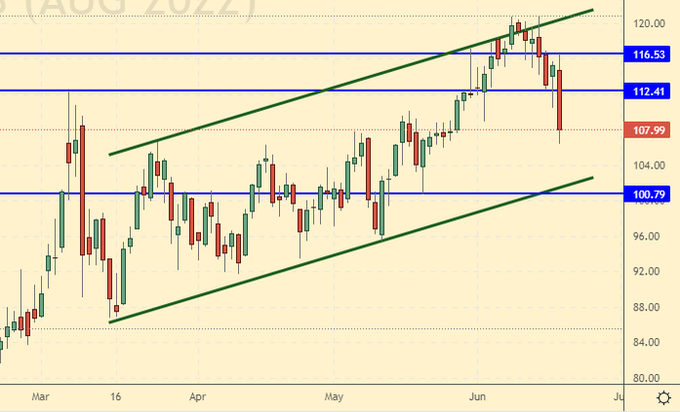 Growth scenario: we are considering the July futures, the expiration date is July 12. Most likely we will see prices fall next week, as the oil market has indicated its desire to decline.

Falling scenario: you can go short. The market will change. The shortage of fuel will decrease. 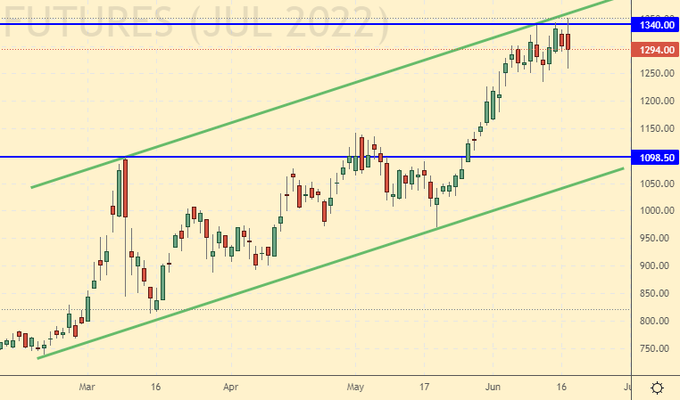 Growth scenario: we are considering the July futures, the expiration date is June 28. An understandable price drops. When approaching 5.500, you can think about shopping. 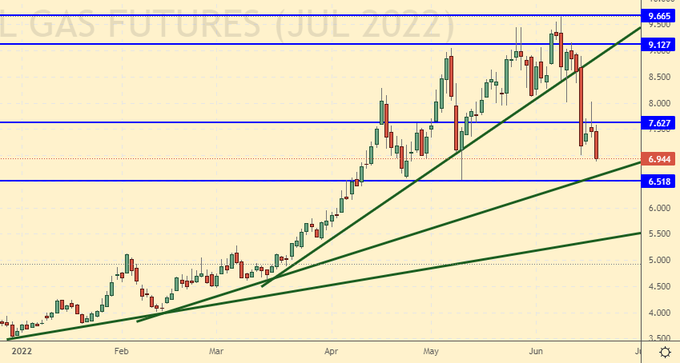 Growth scenario: the dollar looks strong. Until we buy. We are waiting for the price to drop.

Fall scenario: current levels are interesting for short entry. We may fall by 1690. 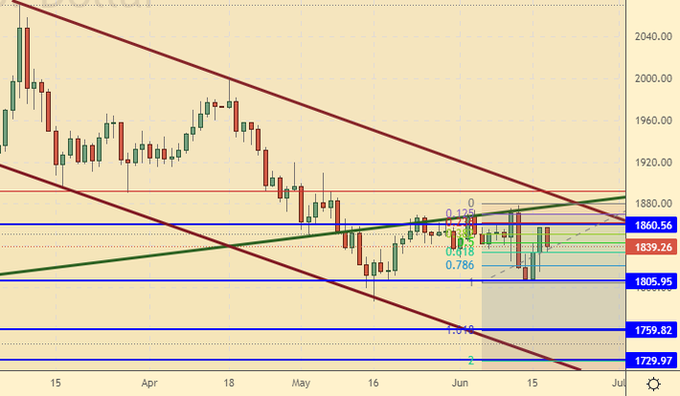 Growth scenario: the pair will tend to fall as long as there is demand for US bonds against the background of the Fed rate hike. We don’t buy.

Fall scenario: the pair is able to go to 0.9700. You can sell from current levels. 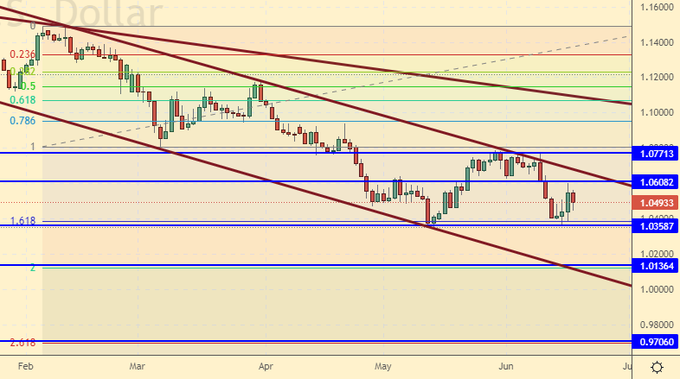 Growth scenario: we expect further interest rate cuts from the Central Bank of the Russian Federation, including at unscheduled meetings. It is impossible to allow all foreigners to trade now for political reasons, so we will not see the growth of the pair in the near future.

Fall scenario: shorts are not interesting from current levels. Yes, we can continue to slide down, but the risk of a sharp upward reversal does not allow us to open positions to sell. 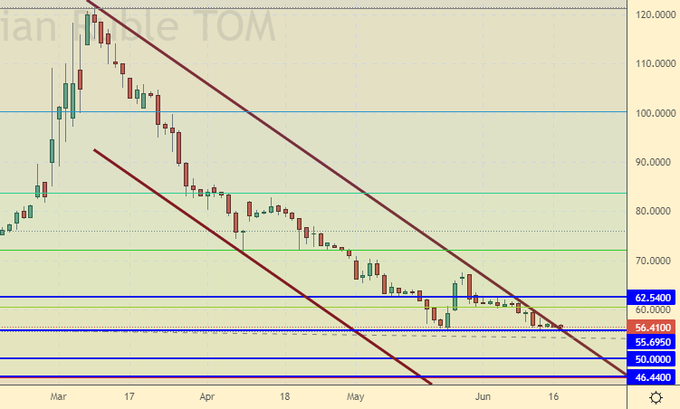 Growth scenario: consider the September futures, the expiration date is September 15th. We see that the surge in purchases of shares by Friday ran out of steam. Apparently the money has run out. It is impossible to deny the possibility of the growth of the Russian market on the money of large participants who will invest their profits in the shares of their own companies, since the options for investing funds abroad do not look attractive. While we can not directly recommend purchases, but they are worth thinking about.

Fall scenario: we continue to note that the move to 130,000 remains possible only due to the strengthening of the national currency. There will have to be a sale. Short from current levels is possible. Recommendations: 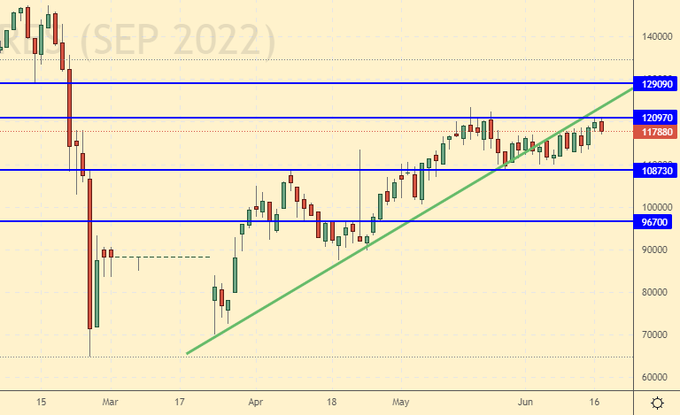