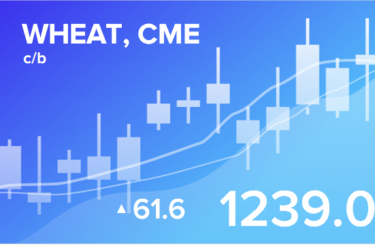 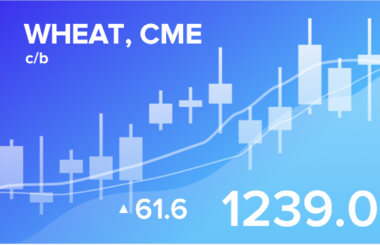 On May 12th the USDA report was released. Forecasts for wheat and corn for the 22/23 season are slightly more modest than last year’s record. There will be no hunger. Congratulations!

For wheat, the gross harvest is forecast at 774.8 million tons, which is only 0.5% less than last season’s result.

For corn, the gross harvest is forecast at 1180.7 million tons, which is 2.9% less than last season.

Production will be reduced in Ukraine, the USA, China and the EU. At the same time, Argentina and Brazil will receive record volumes. World trade will decrease due to the lack of export supplies from Ukraine. Global consumption for both feed and non-feed purposes is expected to decrease slightly.

You see, there’s nothing to worry about. It will only be necessary to earn money to buy all these millions of tons.

By reading our forecasts, you could make money on the gas oil market by going up from 980.0 to 1080.0 dollars per ton.

Biden wrote a paper that the country will reduce the budget deficit by 1.5 trillion. dollars per year. Great slogan. At this rate, in 100 years they will completely get rid of debts.

There was no miracle in the oil market. Sellers failed to breakthrough in the first ten days of May below the psychological level of 100.00 for Brent oil.

Another OPEC report was released, in which it was written in black and white that the fall in oil production in Russia due to sanctions in April could amount to 930,000 barrels per day, which is 8% of current production. Things are expected to be no better in May. Thus, supply is physically leaving the market, which in no way can contribute to a fall in prices.

In this situation, exporting countries should not even be forced to take the side of Russia. It is enough for them to be on their side and not increase production at the request of the “hungry” West. Super profits in dollars are much better than just profits.

For the time being, strict currency regulation remains on the Russian market. In conditions when large consignments of cash are not imported into the country, the gap between the exchange rate and the black market is kept at the level of 13-15 rubles.

As long as the inflow of foreign currency into the country is significant, in the current legislative restrictions there is no way to talk about the growth of the dollar against the ruble. The growth of the dollar can be easily suppressed by the regulator. The rise of the pair to the level of 70.00 is possible, a stronger growth is still questionable.

Over the past week, the difference between long and short positions of managers increased by 5.2 thousand contracts. There are more buyers on the market, and in fact, so far they have turned out to be right. The market is growing.

Growth scenario: we consider the July futures, the expiration date is July 14. Confused by the inability of corn to continue growing. We will keep previously open longs, we do not open new deals.

Falling scenario: in terms of wave structure, a good place for a short. Can be sold. The USDA report was generally positive, it could cool the market by 10%. 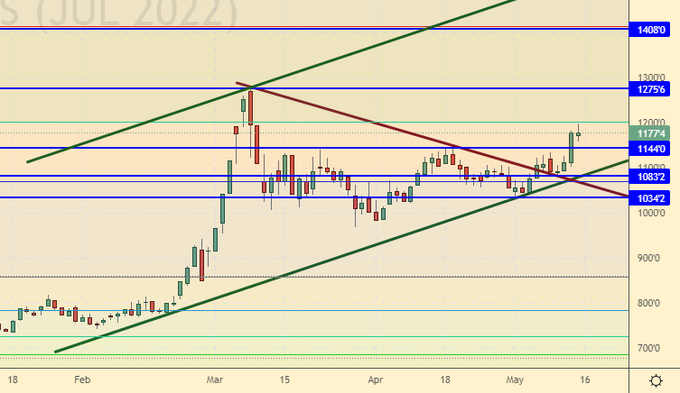 Last week the difference between long and short positions of managers decreased by 14.4 thousand contracts. A group of sellers entered the market, which, it is possible, will continue to put pressure on money in order for their bet to fall to work.

Growth scenario: we consider the July futures, the expiration date is July 14. A fall towards 700.0 after the release of the USDA report cannot be ruled out. We don’t buy.

Falling scenario: shorts from current levels are possible. We do not expect a strong fall, but a correction is visible. 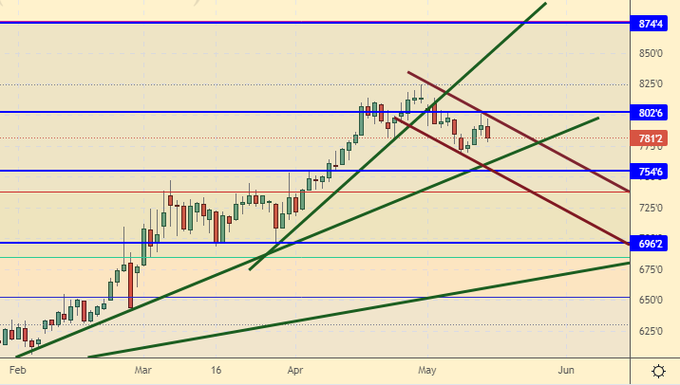 Growth scenario: we consider the July futures, the expiration date is July 14. Despite the fact that we have not reached 1800, we will leave attempts to buy for now. USDA forecast for soybeans for this year +12.97%. It’s a lot.

Falling scenario: A great place to go short. We hold old shorts and open new ones. 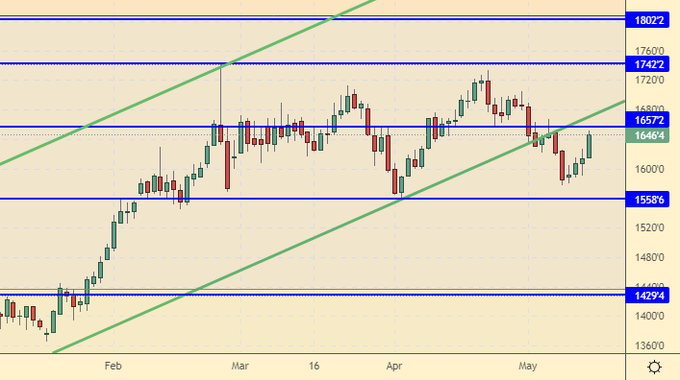 Growth scenario: we are considering the July futures, the expiration date is June 30. We see the desire to buy. Let’s join. Especially since our target at 21.60 remains in place. 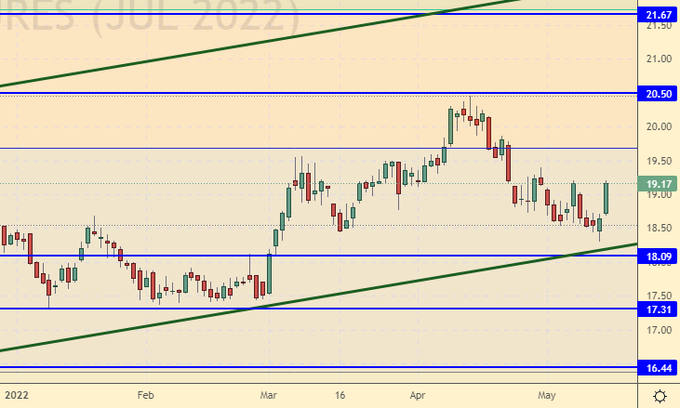 Growth scenario: we are considering the July futures, the expiration date is July 19. There are doubts that we will be able to make a new low after Wednesday’s long green candle. Let’s buy here.

Falling scenario: continue to hold shorts. Target at 185.00 remains. But, we admit that the chances of this short to make a profit are extremely small. 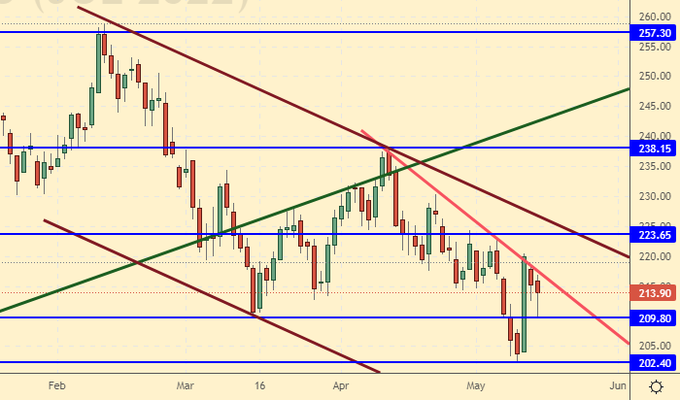 Over the past week, the difference between long and short positions of managers increased by 1.9 thousand contracts. Bulls did not increase, but some of the sellers chose to leave the market. Growth scenario: we are considering the May futures, the expiration date is May 31. Insidiously we were knocked out of the long, but do not despair. We buy again. We do not have a single scenario for the fall in oil prices.

Falling scenario: as soon as it becomes clear that there is an excess supply in the market, we will gladly sell. We are not thinking about shorts yet. Recommendation: 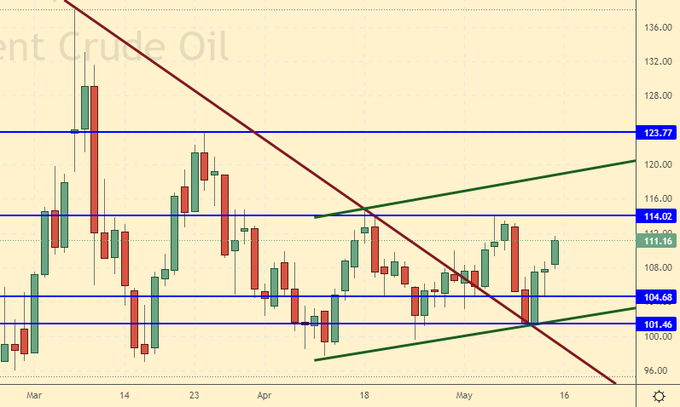 Fundamental US data: the number of active drilling rigs increased by 6 units and now stands at 563 units.

Last week, the difference between long and short positions of managers decreased by 2.4 thousand contracts. A small group of sellers appeared, but their arrival, in fact, did not affect the situation in any way. The market remains bullish.

Growth scenario: we are considering the July futures, the expiration date is June 21. Also, as in Brent, we will go into the purchase for the second time after the breakdown of stop orders.

Falling scenario: there are no options with prices falling right now. Let’s get back to talking about shorts after the market fell below 100.00. 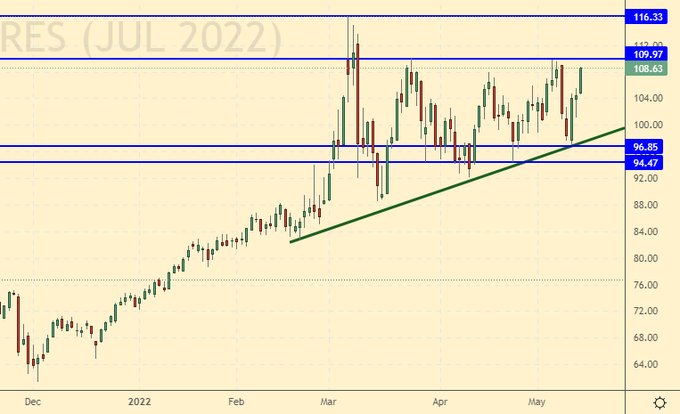 Growth scenario: we consider the June futures, the expiration date is June 10. We continue to buy. There is a feeling that speculators will arrange a black bath for motorists in the summer season.

Falling scenario: we refuse new shorts, we keep the old ones. Yes, there is a slowdown in growth, and in a calm situation we could turn down, but the political situation is far from normal. 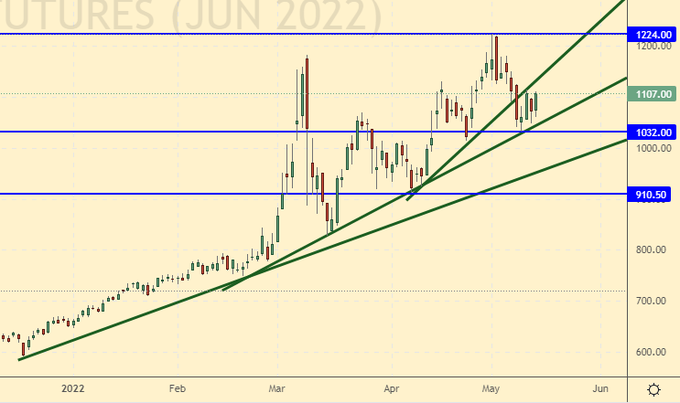 Growth scenario: we are considering the June futures, the expiration date is May 26. We will refrain from shopping for now. In the US, there is an increase in oil and gas production, and this will cool the market. Terminals for gas liquefaction cannot yet digest all the proposals available on the market.

Falling scenario: we continue to believe that it would be interesting to enter short from 10.200. Selling from current levels is also possible. Recommendation: 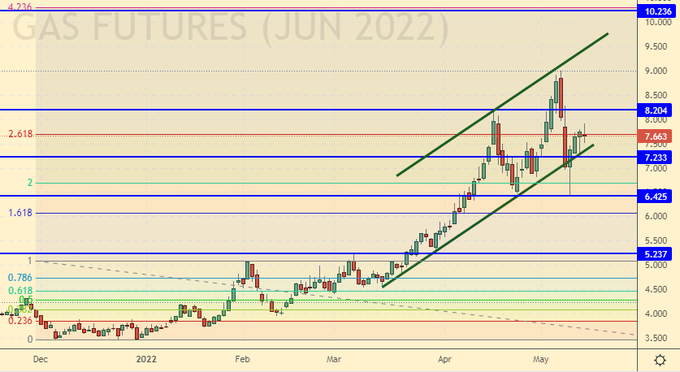 Growth scenario: the dollar continues to put pressure. We go to 1740. When approaching this level, you can open a long position.

Falling scenario: bears continue to push. We have nothing but 1740 downstairs. Keep shorts. 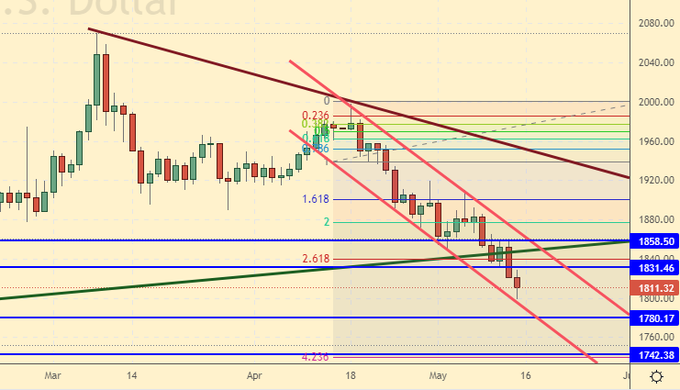 Growth scenario: not a bad situation to buy. Most likely, before the ECB meeting in early June, the market will not dare to fall further.

Falling scenario: we will sell when we return to the area of 1.1000, not lower. 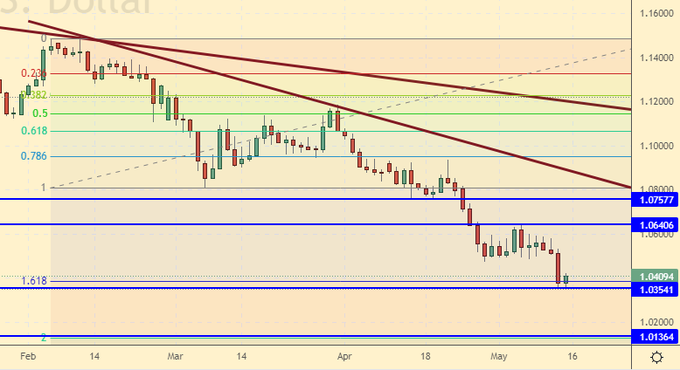 Growth scenario: if the pair rises above 65.00, you can buy. The chances of growth are not great yet, but macroeconomics will sooner or later win the current artificial trades. Recall that at the moment access for foreign traders to the Russian market is closed.

Falling scenario: further strengthening of the ruble will have a negative impact on the budget. We refrain from selling. 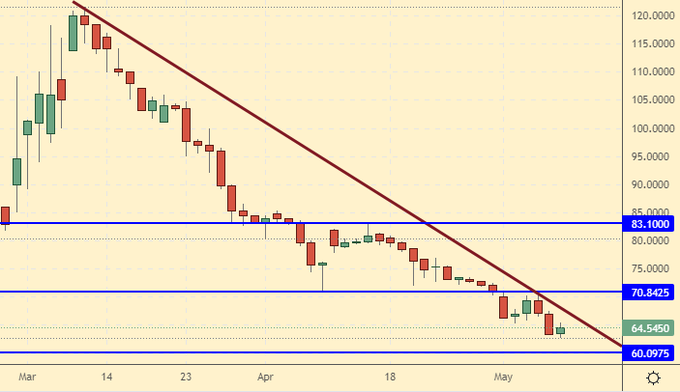 Growth scenario: the index is supported only by the strengthening of the ruble. There is no positive on the Russian stock market and there is nowhere for it to come from. We don’t buy.

Falling scenario: we continue to believe that shorts from 130,000 will be ideal in this situation. Selling from current levels is also possible. The results for the second quarter, if we know them, of course, will be bad, but for the third … for the third they will be such that we won’t be able to pick up printed words even in a day.

At the moment, according to the results of the year, the fall in Russia’s GDP is projected at the level of 6%, inflation is 22%. It is unlikely that we will demonstrate the growth of the stock market on such expectations. 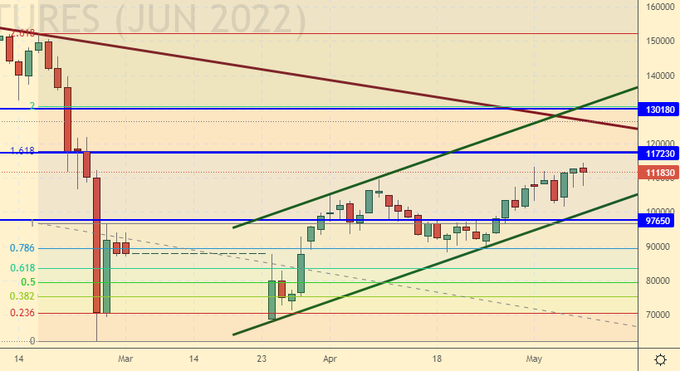