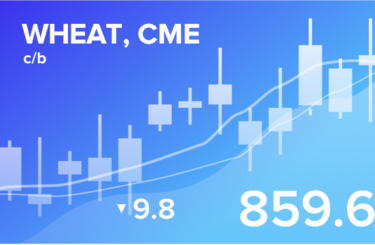 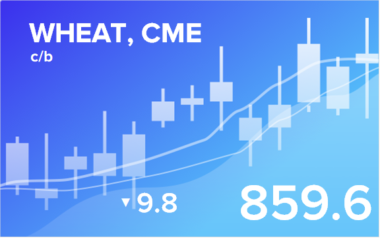 Grain continues to be exported from Ukrainian ports, which makes the background for grain crops more or less acceptable. Where exactly it is taken to Europe or to “poor countries” is of little concern to traders, the main thing is balance.

It should be noted that the Turks will pay for Russian and Ukrainian grain, and will export it without regard for any shouting from Washington, since the Ottoman Empire will not withstand further growth in food prices. At least 130 million tons of grain will be harvested in Russia, including at least 91 million tons of wheat. This is a record figure, which means that high prices within the country should not be expected.

Taking into account the fact that transport opportunities for exports to the south were limited even in calm periods, now, given the obstacles of the West, we can say that by the end of spring 2023, about 15 million tons of wheat will remain in Russia, which there’s just nowhere to go.

This overhang will put pressure on prices in the Black Sea region, but its pressure will largely be determined by the export duties of the Russian Federation on the export of grain. If the duties remain high, and logistical obstacles persist, then there will be nowhere to accept the grain of the new crop, without increasing storage capacity, in the 23rd year. We are building elevators, comrades!

If Indonesia starts buying oil from Russia, Biden will start hiccupping non-stop. If attempts to ban oil exports from Russia by sea from December 5 fail, then the aggressive bureaucrats in the European Union will begin to hiccup.

What’s the news today? One way or another, sooner or later, winter will come to Europe. Here is such a seemingly banal thing that can change the political color of Europe soon. So far, the whole of Germany has gathered to keep the temperature in the offices at 19 degrees. You see, in a couple of months you will have to agree to 14. And there, it’s not far from the fires on the streets and the singing of Varshavyanka. Such is the hard life in developed countries.

Terrified of the approaching winter, the Germans expropriated Rosneft’s shares in three oil refineries, since the refineries directly determine whether there will be enough fuel in the country or not. They fear that the Russians may suddenly stop the production of gasoline. Yes, it happens, about once every 50 years, when the right of someone else’s property becomes touchable. At the behest of the king, well, or the chancellor of Germany.

Since the beginning of the month, gas supplies to Europe via Nord Stream have ceased, and revenue from hydrocarbon exports has begun to fall. This will lead to a shortage of funds in the Russian budget, which may become deficit by the end of the year. Unpleasantly, but a deficit of 0.5% percent of GDP is not the kind of problem that the press and bloggers on every corner should vote about. So far, the economy is doing quite well. Yes, there are risks, well, but when they were not.

The Bank of Russia did not disappoint. Lowered the rate by exactly 0.5%, as expected. Now it is 7.5%. Is it worth it for bank customers to wait for easing of credit conditions? Hardly. Since foreign markets for Russian banks are lost, and there is no particular development in the domestic market, as the population is aging, and there are not enough young and active people for everyone, the conditions for issuing loans will be barbaric.

The severity of the whole situation is demonstrated by the market leader. The age up to which you can pay off the mortgage taken by Sberbank has shifted to 75 years. With such a game, the main thing is to have time to pay. And it’s better … it’s better not to guess at all how it will turn out by such respectable years.

Next week on Wednesday, the US Federal Reserve is likely to raise the rate by 0.75% to 3.25%. It should be noted that the growth of the rate above 4% will definitely start to stifle the US stock market. The regulator has chosen the path of fighting inflation for itself and will sacrifice economic growth in 2023. Note that the dollar on the world stage will continue to be strong for at least another couple of months.

Over the past week, the difference between long and short positions of managers decreased by 0.8 thousand contracts. Both buyers and sellers close their positions for two weeks in a row. Money leaves the market.

Growth scenario: consider the December futures, the expiration date is December 14th. The bulls are acting very arrogant these days. So far, there are no signs of a downward reversal. We hold longs.

Fall scenario: sellers are not persuasive. Nothing to grab onto. We do not sell.

Last week the difference between long and short positions of managers increased by 17.4 thousand contracts. The bulls are back in the market.

Growth scenario: consider the December futures, the expiration date is December 14th. We will buy up to 650.0. There are a lot of bulls, but the more there are, the more dangerous it is to go long. Count the risks.

Fall scenario: we do not open sell positions. Buyers are extremely aggressive, one might say possessed. 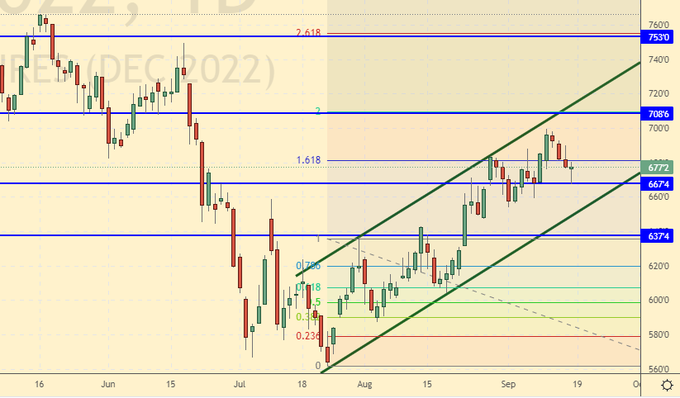 Growth scenario: we are considering the November futures, the expiration date is November 14th. The market is trying to convince us that it will continue to draw a growing channel. Believe him, we will keep the longs.

Fall scenario: if we fall below 1400 we will sell again. Palm oil is not growing in Asia, which should affect soybeans. 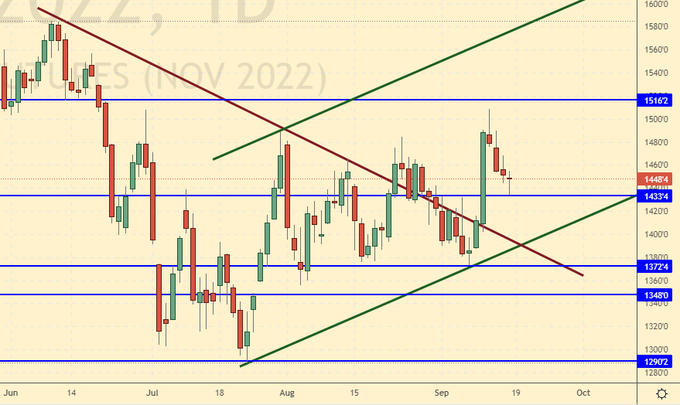 Growth scenario: we consider the March futures, the expiration date is February 28. Despite the move below 17.60, we will buy again. Let’s place a stop order close.

Fall scenario: Things are going well for sellers. We continue to keep the previously opened short, we do not open new positions. 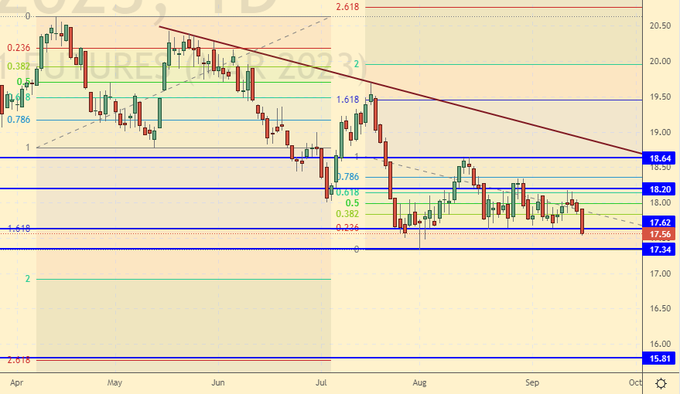 Growth scenario: consider the December futures, the expiration date is December 19. We keep the stop at 200.0 and continue to buy. Growth is possible.

Fall scenario: a pass below 220.0 is a pure surprise. However, until we fall below 200.0 we don’t think about shorts. 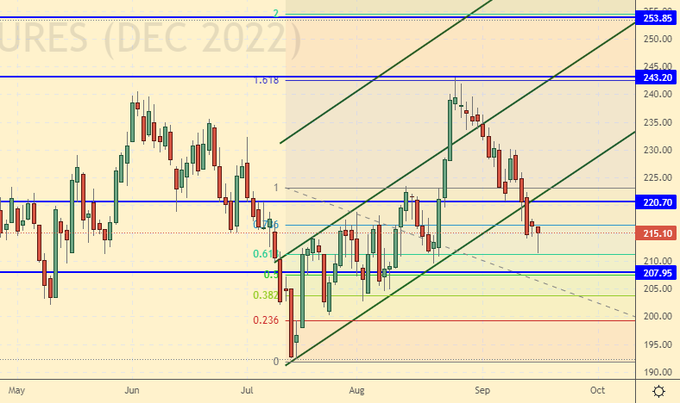 Over the past week, the difference between long and short positions of managers increased by 2.8 thousand contracts. Buyers and sellers left the market, but sellers closed their positions more actively.

Growth scenario: consider the September futures, the expiration date is September 30th. Bulls managed to create a basis for growth. We will buy.

Fall scenario: for now, we will continue to wait for growth to 100.00. If the market allows, then it will be possible to sell there. If we fall from the current levels, then we can think about entering short only after falling below 87.00. 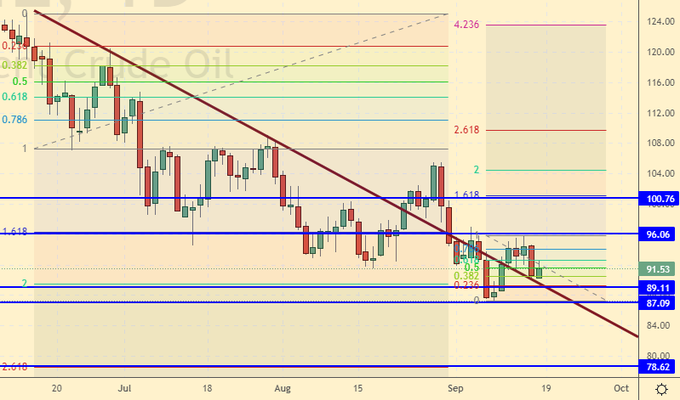 Fundamental US data: the number of active drilling rigs increased by 8 units and now stands at 599 units.

Last week the difference between long and short positions of managers increased by 13.1 thousand contracts. A small number of buyers entered the market, while the sellers closed their positions.

Growth scenario: we are considering the October futures, the expiration date is September 20. In the future, we will continue to count on a fall to 70.00, however, the current levels have become attractive for long entries. Let’s buy.

Fall scenario: shorting from 95.00 continues to be an interesting idea. If there is no growth, then those who wish can sell after falling below 80.00, but this will not be the best deal. 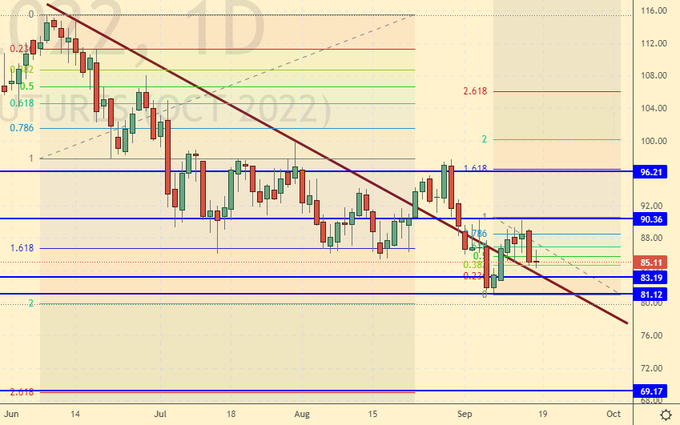 Growth scenario: consider the October futures, the expiration date is October 12. The diesel market has collapsed. We don’t buy.

Fall scenario: it is worth continuing to hold positions from 1115.0. The fall reflects doubts about the ability of the US economy to grow. 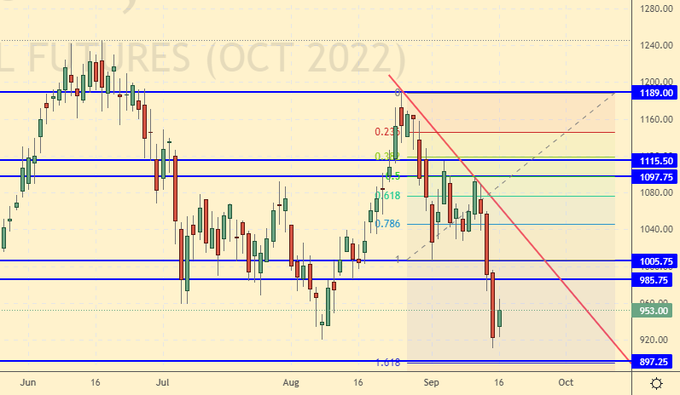 Growth scenario: switched to the November futures, the expiration date is October 27th. Thursday and Friday became unpleasant for the bulls. We do not open new positions, we keep the old ones.

Fall scenario: we fell. This does not fit into fundamental expectations. We do not sell. 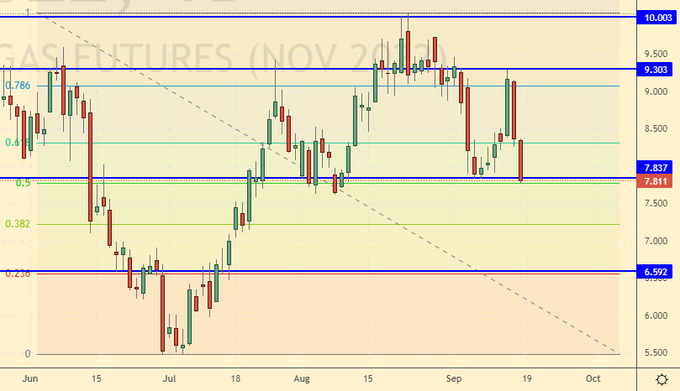 Growth scenario: the dollar is strong. We don’t buy. Fall scenario: continue to hold shorts. Our goal is level 1600. 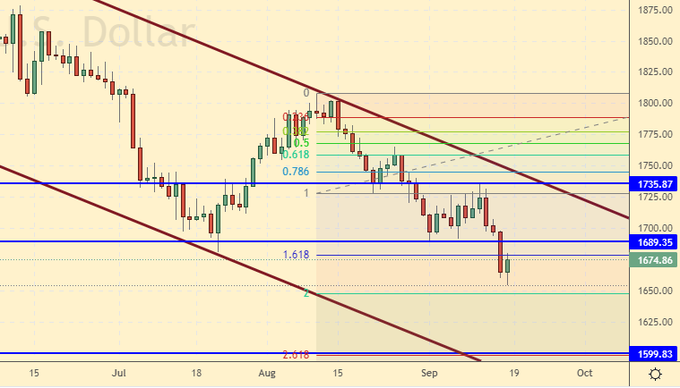 Growth scenario: on Wednesday the Fed will raise the rate and the pair will fall. We will reach 0.9700, further developments are not yet clear.

Fall scenario: continue to hold shorts. Our target has not changed, it is 0.9700. 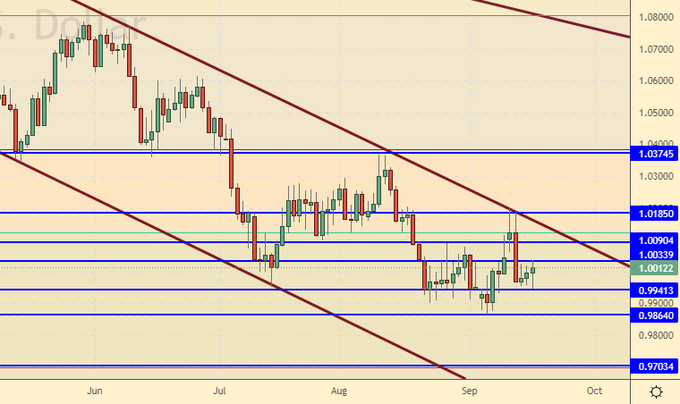 Growth scenario: the pair is in a range. So far, neither the Central Bank’s rate cut nor the prospects for an oil embargo from Europe affect it. It cannot be ruled out that in the future the change in the exchange rate will be abrupt. But this will not happen in the next month. There is tension in the market.

Fall scenario: we will not sell the dollar against the ruble. The fundamental situation around Russia does not cause optimism. 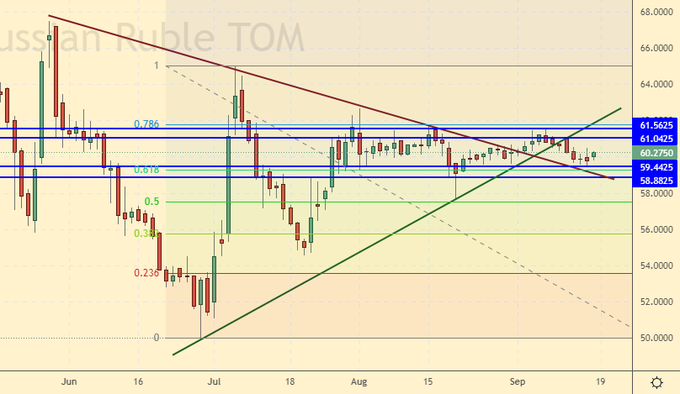 Growth scenario: consider the December futures, the expiration date is December 15th. The RTS index is neither rising nor falling. We see the attenuation of the activity of speculators. There will be no inflow of money to the stock market from abroad. Growth is possible only through internal resources, which are scarce. We hold longs, but we understand that the mood can change quickly. 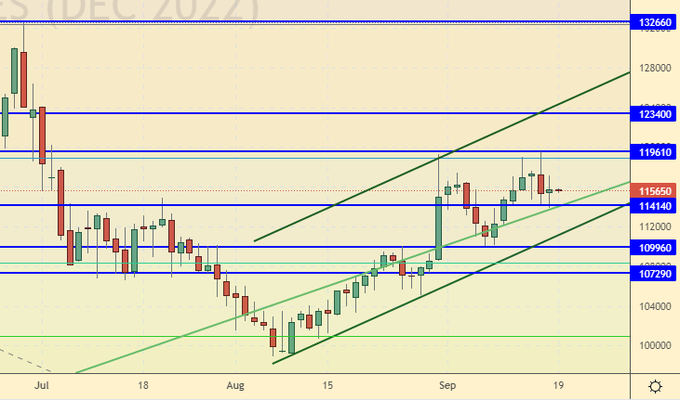