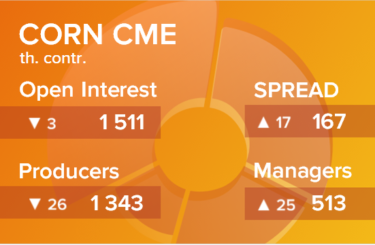 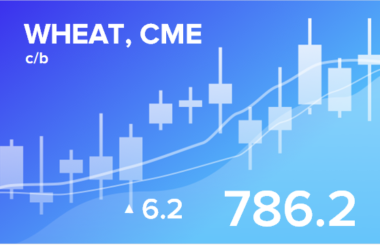 Everyone needs to sit on something soft and calm down. The Beijing Olympics open on Friday, dear investors. Who, where and how should stand on the globe, you can continue to point out to each other even after the Games. Peace to the world!

The lack of moisture in Brazil in January affected the soybean crop. In the leading producer, the state of Parana, the gross harvest was reduced by 35% compared to December to 12 million tons. The most important oilseed and fodder crop is becoming more expensive and looks better than the rest of the market at the moment. Rising prices for soybeans keep the price of corn from falling. Wheat behaves a little more freely, but the bears also failed to organize a strong decline.

The problem of the growing cost of fertilizers continues to worry farmers, some of whom will be forced to violate production technology. It is possible that the 22/23 season can be somehow survived, which is called by inertia, but if gas prices in Europe do not show a significant decrease, we will have a very bad 23/24 season, as all fertilizer stocks will run out.

By reading our forecasts, you could have made money in the soybean market by taking a move up from 1267.0 to 1468.0 cents per bushel.

It is unlikely that Moscow, not only with deeds, but even with words, will spoil the mood of Beijing during the Olympics. Most likely everyone will try to be as correct as possible. However, this year traders will not be able to relax even for an hour. We have either a pandemic, or inflation, or elections to the American Congress.

OPEC+ is very likely to announce an increase in oil production in March by 400,000 barrels per day. It will take place on Wednesday, February 2nd. Until this moment, we will not see a fall in the market, prices will remain in good shape. Brent can still go up by two or three dollars, WTI has already hit a strong resistance level and further growth will be difficult.

Increasingly, there are reports that the oil industry in 2020 and 2021 did not receive the necessary funding to maintain its infrastructure. Complaints were heard by the market, but it will not be possible to speculate on this topic for a long time, since the current price levels allow oil companies to do absolutely everything: produce, buy new drilling equipment, new football players, open restaurants, strip clubs and casinos. Anything. The main thing is not to get carried away, and sometimes remember about the exploration of new deposits.

The meeting of the US Federal Reserve on January 26 on Wednesday ended as the market expected: after March 16, we are waiting for the complete curtailment of the quantitative easing program, the rate increase, and the issuance of new bonds in order to collect excess liquidity from the market.

The dollar index reacted to what he heard with a confident growth, but we do not see much enthusiasm, as it remains unclear whether there will be at least some increase in the Fed’s rate in reality or not. America has a hole in the budget of 3 trillion. Raising the rate will lead to the fact that it will not become 3 trillion, but as much as 5 trillion, as the cost of servicing the debt will increase, just because of the increase in the rate.

Thus, the situation is not as simple as dollar fans would like. Recall that their chairman of the Fed is appointed by their president.

The ruble did not stay above the level of 80.00 for a long time. It is possible that the Central Bank helped. If the confrontation between Moscow and the West remains within the diplomatic framework, then the ruble should not have any problems in the future. Recall that oil has risen in price for the year twice, and natural gas five times. The flow of currency into the country is beyond all expectations.

Over the past week, the difference between long and short positions of managers decreased by 13.2 thousand contracts. There are still more sellers on the market than buyers, but if the level of 770.0 does not go down, then the mood on the market may become bullish again.

Falling scenario: in theory, sellers could push the market to the 700.0 level, but as long as corn and soybean prices are high, wheat will not be able to stand alone against these two crops for long. 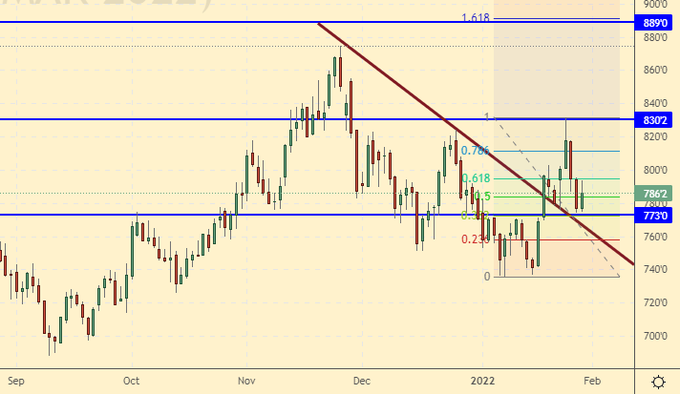 Last week the difference between long and short positions of managers increased by 41.2 thousand contracts. There are many more buyers in the market than sellers.

Growth scenario: March futures, the expiration date is March 14. The bullish mood remains. It is very likely that we will go to 685.0. Buying from current levels looks dangerous, you can enter long only in case of a rollback to 600.0.

Falling scenario: when approaching 685.0, it is mandatory to sell. The current levels of interest for short entry are not. 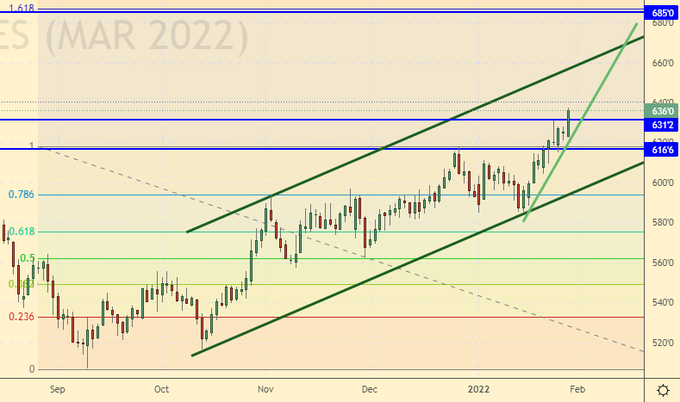 Growth scenario: March futures, the expiration date is March 14. The market hit our target at 1468.0. For a new long entry, we need a rollback. All with a profit.

Falling scenario: sell at current levels. The mood of the market is extremely aggressive, but we are not afraid of anything. We have a stop order. Recommendation: 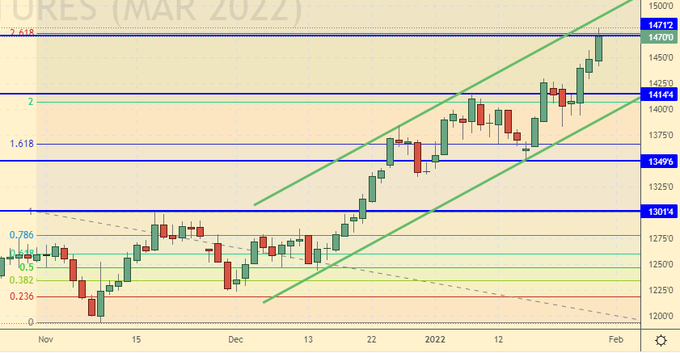 Growth scenario: March futures, the expiration date is February 28. Sugar does not want to grow yet, but the prerequisites for the resumption of the upward movement remain. We hold longs.

Falling scenario: only around 20.00 we will think about shorts. The current levels for entering shorts are not interesting. 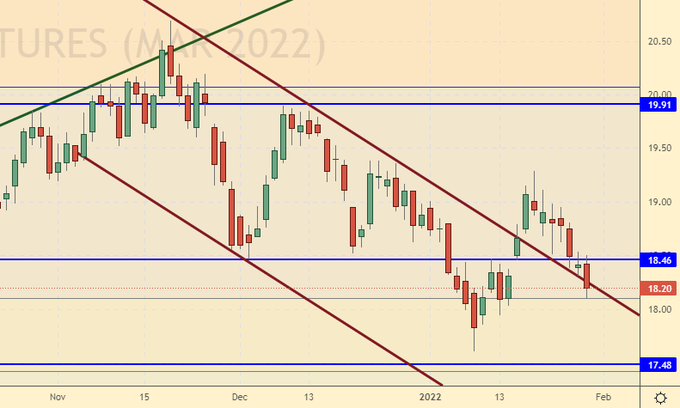 Growth scenario: March futures, the expiration date is March 21. The market remains in a rising channel, however, there are signs of a downward reversal. While out of the market. 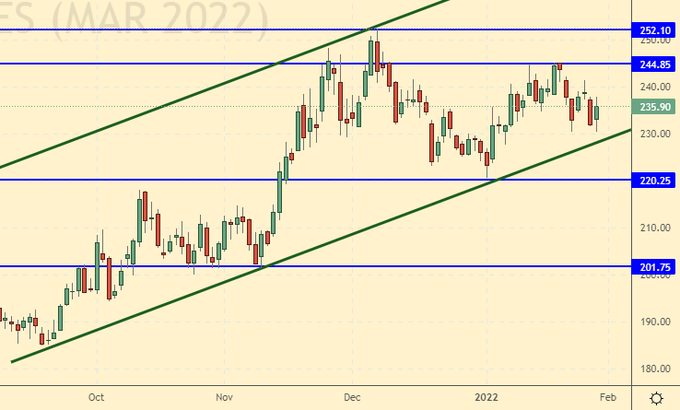 Over the past week, the difference between long and short positions of managers decreased by 9.1 thousand contracts. The change is minor.

Growth scenario: February futures, the expiration date is February 28. The market continues to approach the level of 94.20. For purchases, we need a pullback. While it is not, we are out of the market. Falling scenario: from 94.20 it is mandatory to sell. It cannot be ruled out that the chain of events will lead us to the 65.00 level in the future. Recommendation: 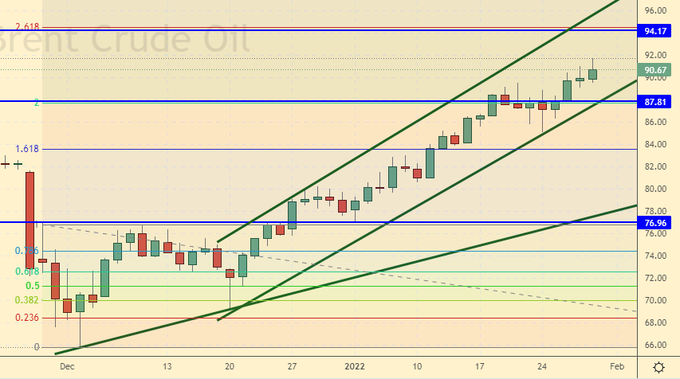 Fundamental US data: the number of active drilling rigs increased by 4 units and now stands at 495 units.

Last week the difference between long and short positions of managers decreased by 15.7 thousand contracts. Buyers began to leave the market fixing profits.

Growth scenario: March futures, the expiration date is February 22. Buying levels are too high. We need a rollback. Until we buy.

Falling scenario: the current area is interesting for sales, you can go short. 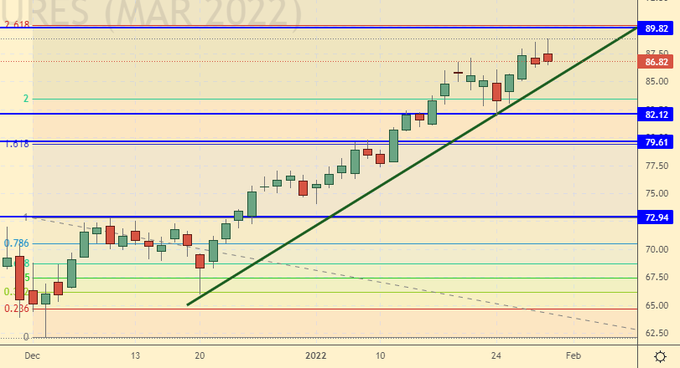 Growth scenario: February futures, the expiration date is February 10. We will not buy. There is an option for the development of an upward movement to 935.0, but for this some events must occur. In the meantime, they are not, we are out of the market. Falling scenario: short from current levels is required. We sell now. 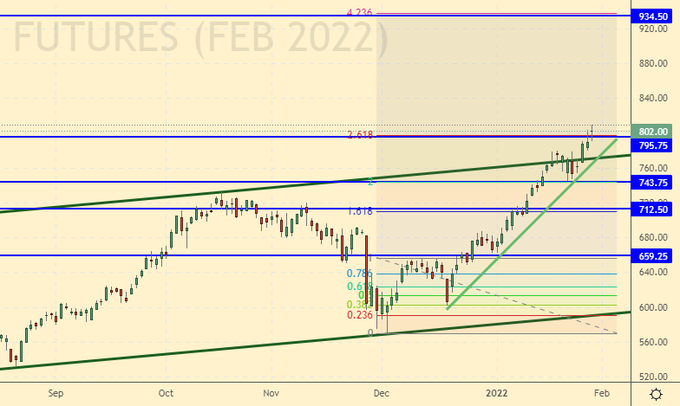 Growth scenario: March futures, the expiration date is February 24th. The American market twitched up. It is high time. We stand in longs.

Falling scenario: we will not sell. In the future, it would be interesting to go short from 8.777. 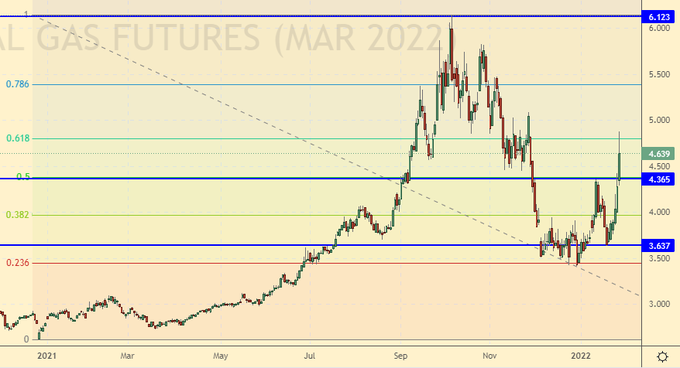 Growth scenario: sellers have become more active after the Fed meeting. The meeting was tough, but not so much as to aggressively sell everything. We hold longs, but recognize the possibility of a move to 1650.

Falling scenario: shorting gold will be possible after falling below 1770 while out of the market. Recommendations:

Sale: think after falling below 1770. 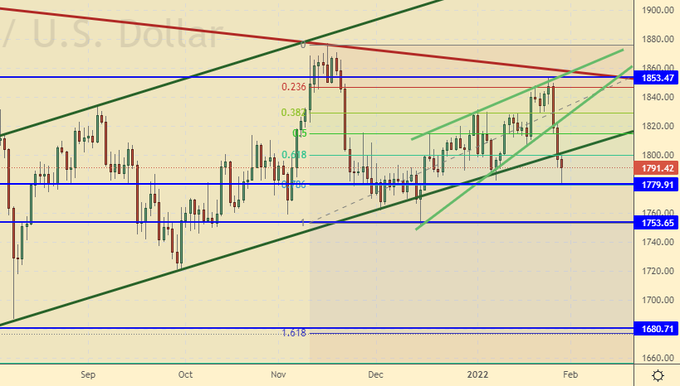 Growth scenario: we see the fall to 1.1060 that we predicted. Now and as you dive to the named level, you can buy.

Falling scenario: there are practically no prospects for further decline. Only closer to March we can see a move to 1.0600 if everything is very bad with the euro. 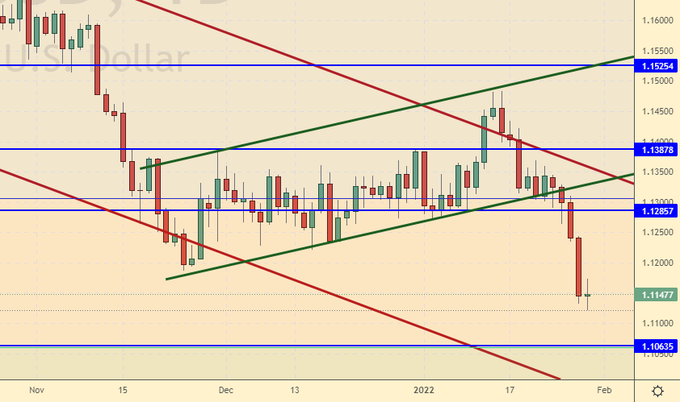 Growth scenario: we see a pullback down from the level of 80.00, however, it is not sufficient to talk about a downward reversal of the pair. The tension in the market will remain indefinitely for a long time, which will harm the ruble in the medium term.

Falling scenario: if the Kremlin comes out of the current situation beautifully, namely: new agreements are signed related to weapons of mass destruction and conventional weapons in Europe, then we will see the strengthening of the national currency. Noteworthy in the current circumstances is the behavior of Berlin, which, as it can, slows down the aggression of Washington and London. We will certainly give the Germans a discount on gas. 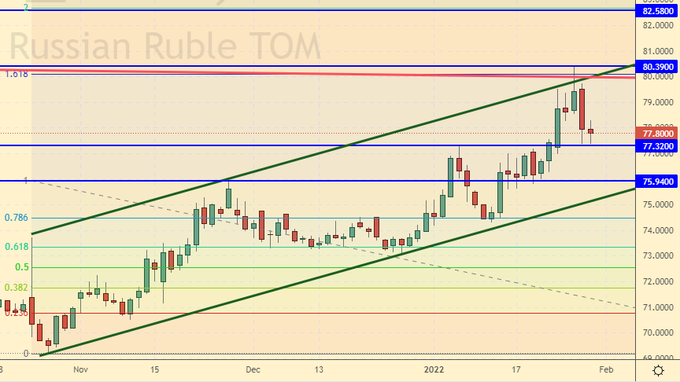 Growth scenario: unfortunately, we will not see bulls in our stock market for a long time. Citizens, they are novice investors, are clearly upset and will not return to the stock market again. And the pros, for that and the pros, will look at the future of the Russian economy with some pessimism even after the tension between Russia and the West will be reduced. We don’t buy.

Falling scenario: response from Washington received. Not announced yet, but received. The main demands of Moscow were ignored by the West. The Kremlin must now somehow respond to this. Everyone is waiting. As for stocks, it is unlikely that there will be many willing to take at current levels. But in the future, Sberbank could attract fresh money to the market for 60 (sixty) rubles. Keep shorts. 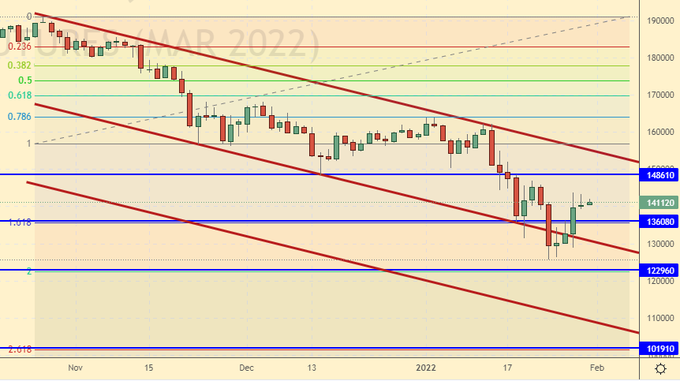