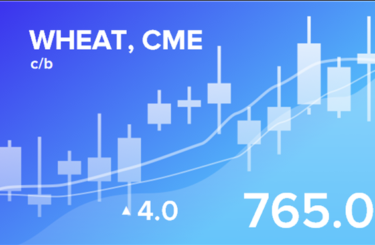 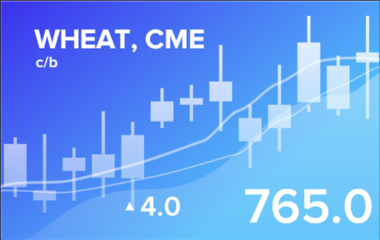 And they burned candles and suffered under them. And they moaned freezing. And they called to each other in the midnight darkness. And finally they identified it. The price of oil! And be at level 60.

It will be very disappointing if the Kremlin does nothing in response to the European medieval Sabbat. At least it is necessary to transfer some calming pills with a diplomatic courier to Brussels.

We all have long summers. And we have warm winters. Hello!

Limiting the price of oil and other sanctions against Russia will support prices. Tension in the hydrocarbon market will only increase. This factor will directly affect the cost of fuel for farmers, who will have to either get new subsidies or raise selling prices.

The gross grain harvest in Russia amounted to 155 million tons. This is a huge crop that is unlikely to be sold within the next six months, even if exported at a super-fast pace of 1 million tons of grain per week. Understanding this, a number of farms will switch to alternative crops in the spring, if possible. The grain market inside Russia will remain at low price levels for a long time.

Winter crops in the south of the country are in excellent condition. There is enough moisture in the fields. Due to the successful autumn sowing campaign on an area of 17 million hectares, it can already be said that the wheat harvest in Russia in 2023 could reach 90 million tons. Great news for the country at this difficult time.

It is possible that the next week will be nervous, as Russia may respond to the introduction of the maximum price for Russian oil from the West. For example, Moscow may not wait for February 5, when the embargo on the supply of petroleum products to Europe will come into force and stop deliveries earlier. In a fight, hair is not spared. Two months of deliveries of oil products to the EU, namely: December and January, will not help Russia in any way, but such a move may shock opponents.

The OPEC+ monitoring committee recommended keeping the deal to cut production by 2 million barrels of oil. At the same time, harsh verbal interventions by exporters on Monday and Tuesday cannot be ruled out. If you swallow restrictions on the price of oil for Russia, then it will soon be possible to obtain a price restriction for the states that are members of the cartel. And then this practice will spread to all raw materials mined in the world.

Next week +2 in Berlin, +5 in London. While Europe is lucky, there are no negative temperatures. But who knows what will happen to the weather for the New Year.

Anticipating the pre-New Year’s consumer boom, importers increase the supply of goods to the country, which negatively affects the ruble exchange rate, as the demand for foreign currency on their part is growing. The December tourists, who need to take at least $200 for souvenirs, add fuel to the fire.

The ruble will be under pressure for the next few days, as the market will win back the imposition of an oil embargo by the EU. It is possible that before the New Year we will visit the area of 65 rubles per dollar, a stronger move up on this day and hour looks unlikely.

Growth scenario: we consider the March futures, the expiration date is March 14. The bulls failed to hold the market. We showed a new low. We will now buy only from 650.0.

Fall scenario: we continue to hold shorts from 840.0. Let’s shift down the target for the current fall to the level of 650.0 cents per bushel. 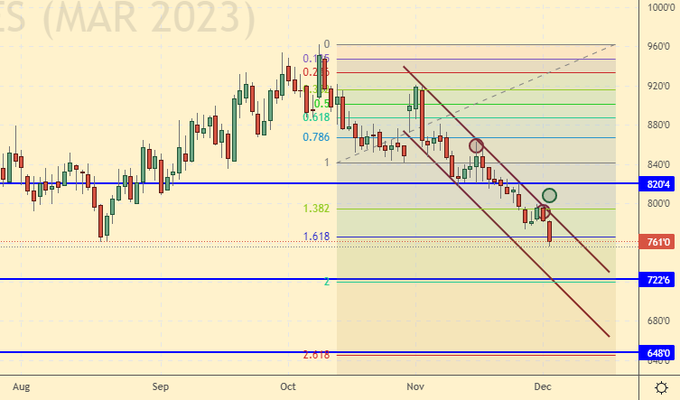 Growth scenario: we consider the March futures, the expiration date is March 14. Red Friday broke growth hopes. Out of the market. 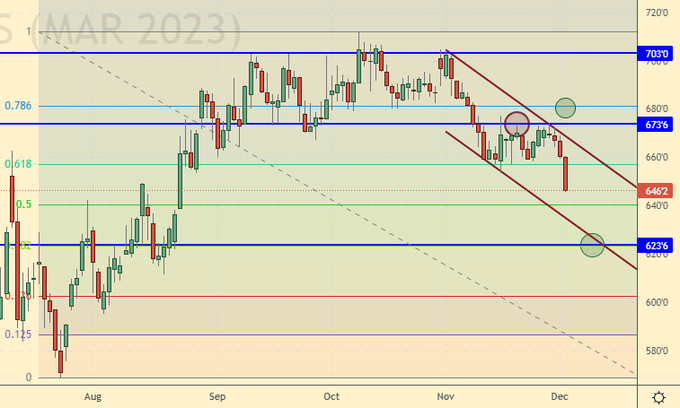 Growth scenario: consider the January futures, the expiration date is January 13th. We will continue to hold longs from 1425.0. We are not opening new positions.

Fall scenario: knocked out of the position by a stop order. Despite this, we will sell again. 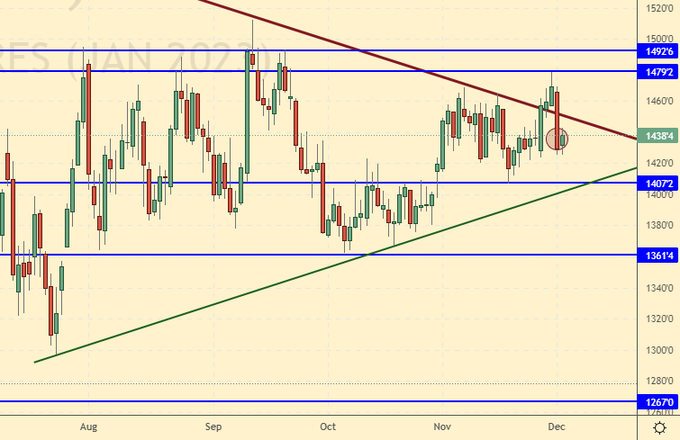 Growth scenario: we consider the March futures, the expiration date is February 28. The market rebounded from the 19.00 area. If you have bought, hold positions.

Fall scenario: here you can sell. There are few chances for further downward movement, but they are there. 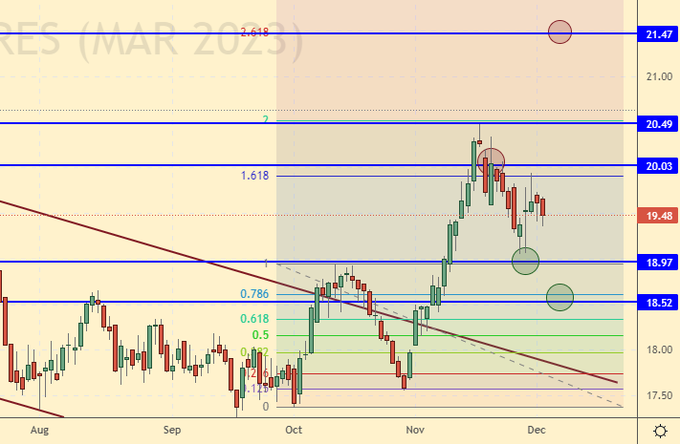 Growth scenario: we consider the March futures, the expiration date is March 21. Let’s be honest, buying from 160.0 has almost no chance. Move the stop closer.

Fall scenario: we remain outside the market and wait for more profitable levels to enter the shorts. 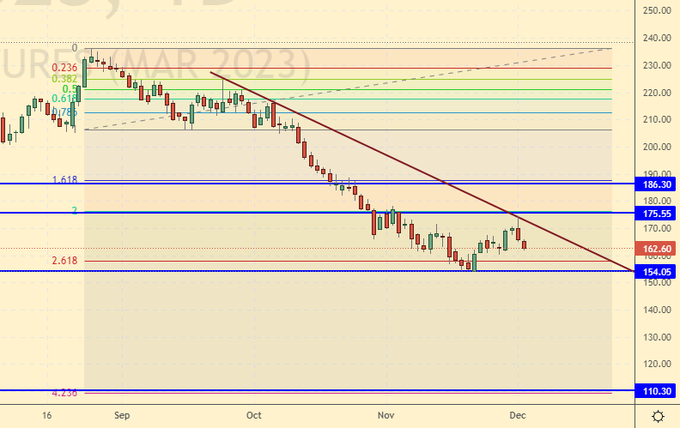 At the moment, there are more open long positions of asset managers than short ones. Buyers control the market. Over the past week, the difference between long and short positions of managers has decreased by 34 thousand contracts. The change is significant. The bulls left the market en masse, the sellers actively entered. The spread between long and short positions has narrowed significantly, the bulls may lose control of the market.

Growth scenario: consider the December futures, the expiration date is December 30th. We continue to refuse purchases. We are waiting for the market to fall to the level of 67.00.

Fall scenario: you can go short here. We failed to rise above 90.00, and this fact is enough for the sellers to have the advantage. 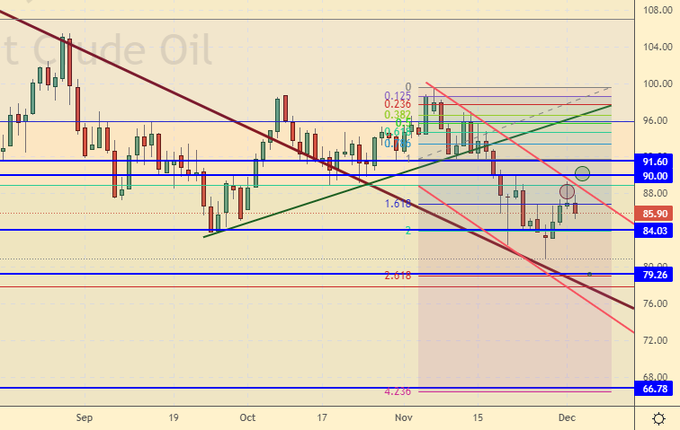 Fundamental US data: the number of active drilling rigs has not changed and is 627 units.

At the moment, there are more open long positions of asset managers than short ones. Buyers control the market. Last week the difference between long and short positions of managers decreased by 7.4 thousand contracts. Both buyers and sellers left the market, but buyers did so more actively. The spread between long and short positions has narrowed, the bulls continue to control the situation.

Growth scenario: consider the January futures, the expiration date is December 20. The bulls failed to move above 85.00, which tells us that they are not ready to take control of the market. We do not buy from current levels, we are waiting for a fall. 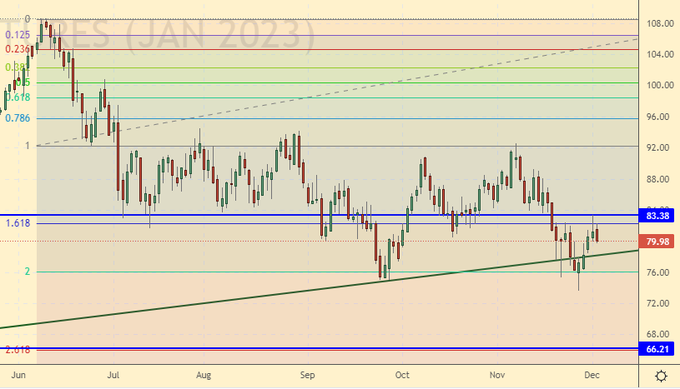 Growth scenario: consider the January futures, the expiration date is January 12. The market is in balance. It’s hard to give preference to someone. We don’t buy.

Fall scenario: from current levels, you can sell with minimal risk. 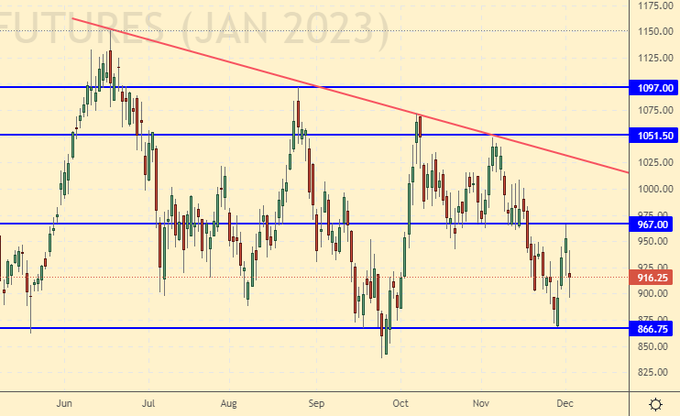 Growth scenario: consider the January futures, the expiration date is December 28. Despite the terrible last week, we will continue to stand in the longs. Moreover, here you can increase your positions.

Fall scenario: we will not sell. It’s winter outside. And it is not yet clear how severe it can be. 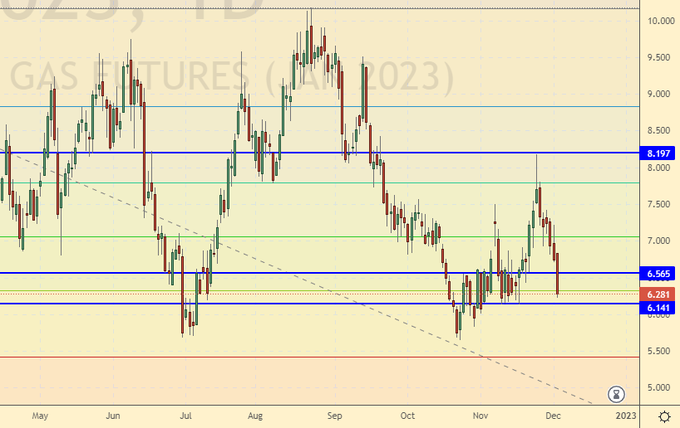 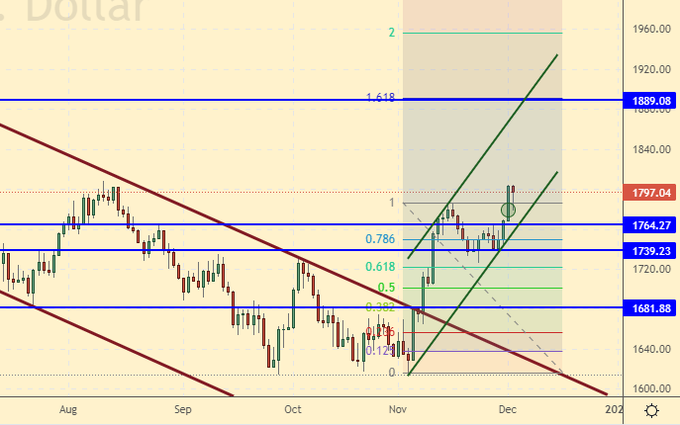 Growth scenario: we went up… In this situation, it was necessary to buy above 1780 (we wrote about it). Most likely we are going to 1890.

Fall scenario: sellers were kicked out of the market. We do not sell. And from 1890 we will not sell.

Growth scenario: we went straight to 1.0700. December 8th ECB meeting. If there are no tough decisions, the pair will roll back from 1.0700 back down. We don’t buy.

Fall scenario: Selling when approaching 1.0700 is a normal idea. It is unlikely that the euro will be able to strengthen even more. There are too many problems in Europe. For example, Biden refused Macron to stop the Americans from poaching European enterprises. And Russia will soon refuse them diesel fuel. They will ride reindeer. 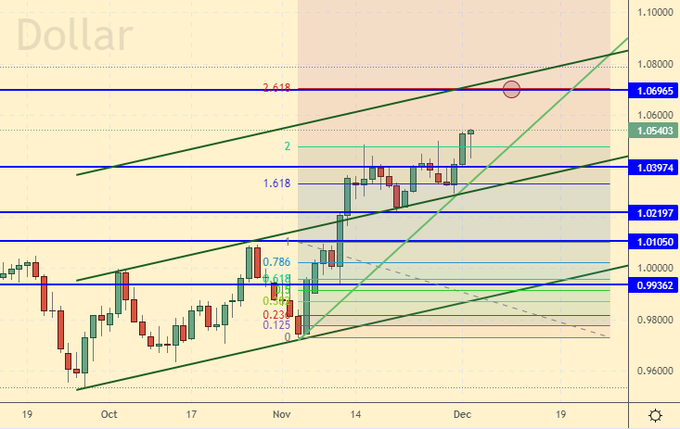 Growth scenario: for the dollar bulls, the situation began to develop in a favorable way. It is worth holding the previously opened positions. There is a possibility that our politicians will sacrifice the Russian market and the Russian currency in the confrontation with the West. Decisions that are inefficient from the point of view of developing their own economy can be made.

Fall scenario: we did not see the strengthening of the ruble, although such a possibility could not be written off. Now we are not thinking about strengthening the national currency. 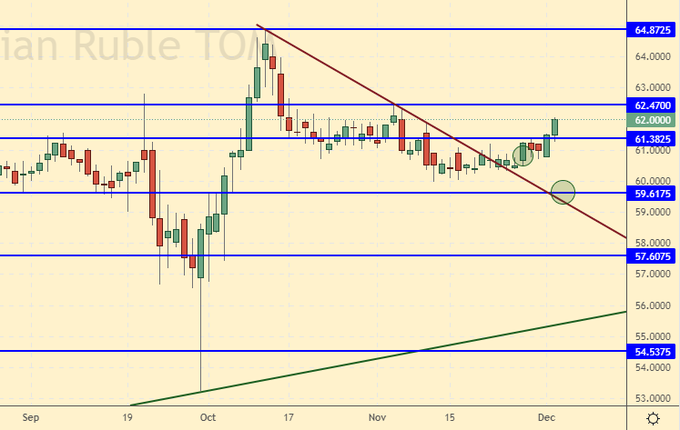 Growth scenario: we consider the March futures, the expiration date is March 16. The market last week showed new lows day after day. There is a threat of a pass below the 106000 level, which will lead to a fast move to 101000.

Fall scenario: bulls failed to push the market to 117000. This indicates the weakness of the buyers. Now we cannot expect any growth in the Russian market against the backdrop of the embargo on oil by the EU. Keep shorts. 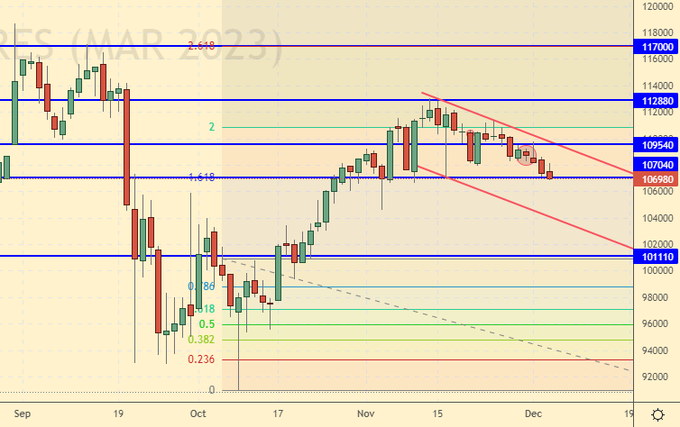