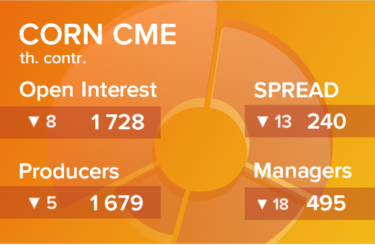 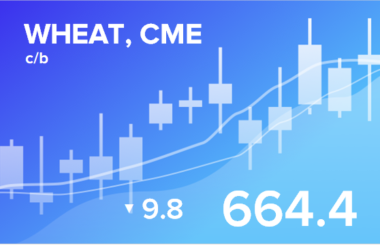 The harvest of grain and leguminous crops in Russia this year will amount to 127.4 million tons, including 80.7 million tons of wheat, follows from the base forecast of the Ministry of Agriculture.

Recall that the USDA forecast for the beginning of May for the gross harvest of wheat in Russia was 85.354 million tons, that is, 5 million tons more. The conservative forecast from the Ministry of Agriculture is able to support prices in June. However, by inertia, the cost of milling wheat with 12.5% protein at FOB Novorossiysk is capable of reaching $ 270 per ton. Further decline is not yet visible.

Farmers’ prices for wheat in the US state of Illinois at the elevator in May are at $ 240 per tonne and have hardly fallen since the beginning of the calendar year. Moreover, they are at their maximum values over the past five years. It is possible that a correction on the stock exchange will force producers to lower prices, but here too we cannot count on a serious drop, since demand remains high amid heightened inflationary expectations.

It is highly likely that an agreement on the Iranian nuclear program will be concluded next week in Vienna. In exchange for giving up possession of nuclear weapons, Iran could receive significant economic preferences from the United States. The Iranian president has practically announced the signing of the agreement. Most likely, there are several days left to wait.

Iran is already preparing to increase production. As soon as the signatures are put on the contract, additional volumes of oil may enter the market. And here comes a very difficult time for OPEC +. With a 99.99% probability Iran will demand a revision of its own quota. We, they say, suffered from sanctions, now we need a lot of money. The fact that China will pour 400 billion dollars into the Iranian economy in exchange for the same oil, the representatives of Tehran will not remember at the talks.

Thus, we are on the verge of a big confrontation within OPEC + over the allocation of quotas. A quarrel is possible. Reason does not always rule in politics. If Saudi Arabia starts dumping and increasing production again, it will lead to a repeat of the 2020 scenario, unless prices are negative this time.

Buyers of oil futures in such a situation feel themselves uncomfortable.

Let’s put it bluntly: the purchasing power of the dollar is falling. The Fed will push back to the last and keep rates at a level close to zero, trying to shake the labor market inside the country, while prices for goods and services will go up.

Since the introduction of subsidies from the government in connection with the pandemic, the stratum of people who do not want to work, if not tripled, then doubled for sure. Only a reduction in payments will force people to look for work. Of course, the rating of the Democratic Party will fall, but if the subsidies are not removed, the US economy will fall.

The ruble in the current environment, leaning on the shoulders of the euro and the yuan, can maintain its tone for several months. But only until the same Europe and the same China begin to suffer from an imbalance in the US economy.

The world is waiting for the Fed rate hike. 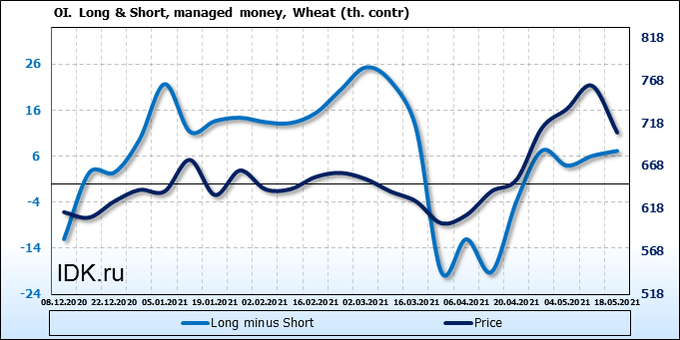 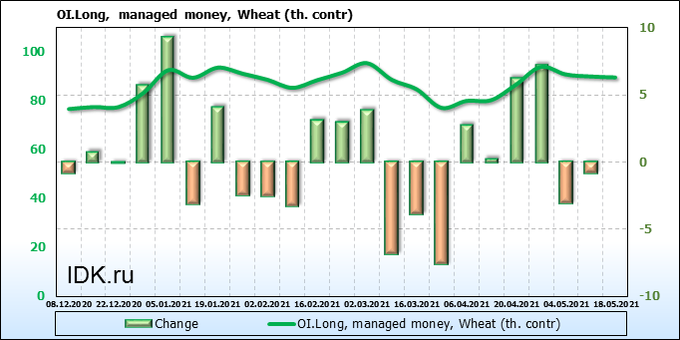 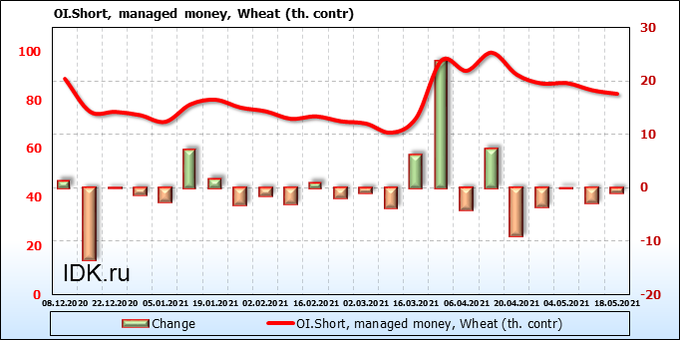 It is strange that buyers have not yet appeared on the market. This tells us about a high probability of visiting the level of 650.0 cents per bushel. We are unlikely to see a stronger drop without authoritative forecasts for the growth of gross harvest.

Growth scenario: July futures, expiration date July 14. For bulls, nothing has changed since last week. We are disciplined waiting for the arrival of prices in the 650.0 area. We will buy there.

Falling scenario: you have to hold your shorts and endure. An upward reversal from current levels looks premature. 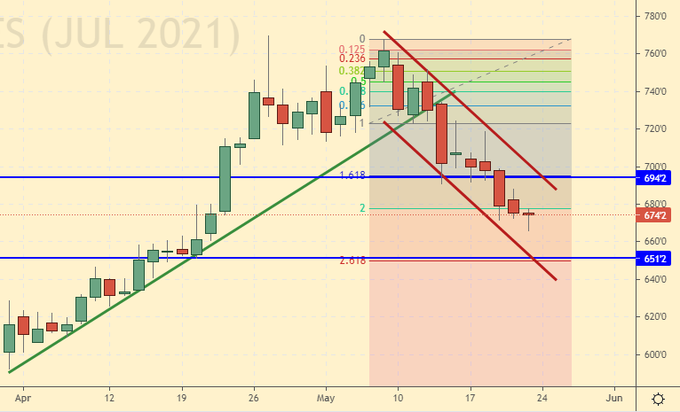 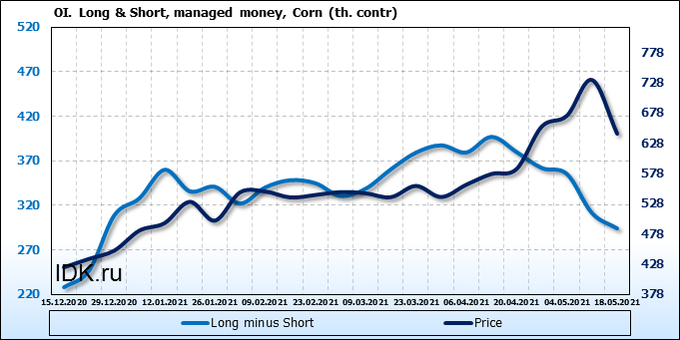 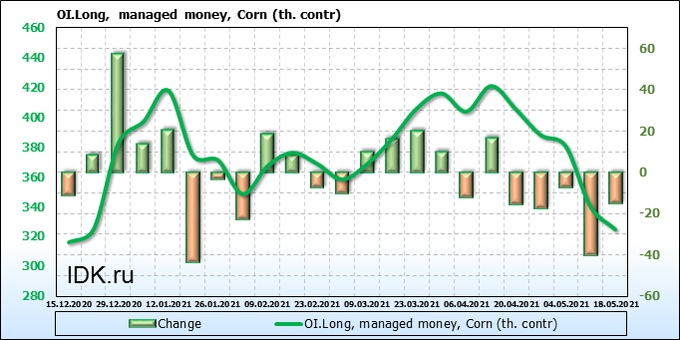 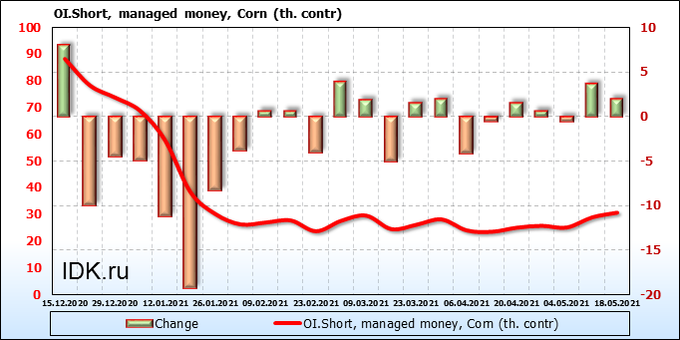 Bulls don’t want to go back to the market. Most likely, last week’s rebound will not lead to a strong rise in prices. Only after the fall to 600.0 should we expect an attack by buyers.

Growth scenario: July futures, expiration date July 14. It’s simple. We look forward to a fall in prices to 600.0 and buy.

Falling scenario: sales can be increased at current levels. Even the rise in prices to 700.0 shouldn’t be embarrassing. You need to sell. Wheat and corn prices are almost equal. The value of man and pig in society has reached parity. This doesn’t happen often. The speculators are obviously overplaying. Recommendation: 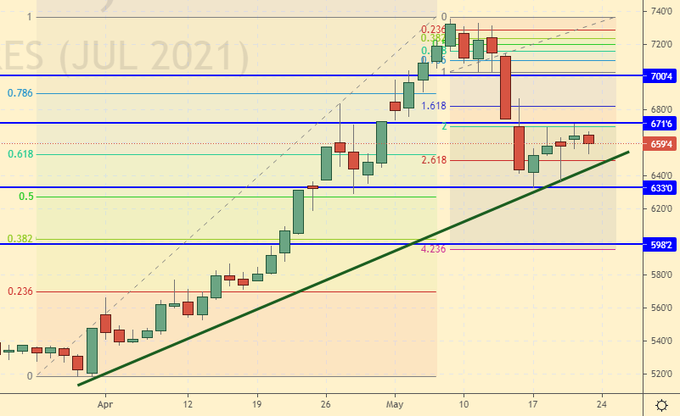 Growth scenario: July futures, expiration date July 14. Most likely, the market will test the strength of support in the 1450 area. It is very likely that against the background of higher forecasts for the gross harvest of soybeans, it will not resist. We don’t buy.

Falling scenario: «From 1600 it will be interesting to sell», we wrote a week earlier. This was what had to be done. Most likely we will go to 1380.0, and after the correction we will try to reach 1260.0. Recommendation: 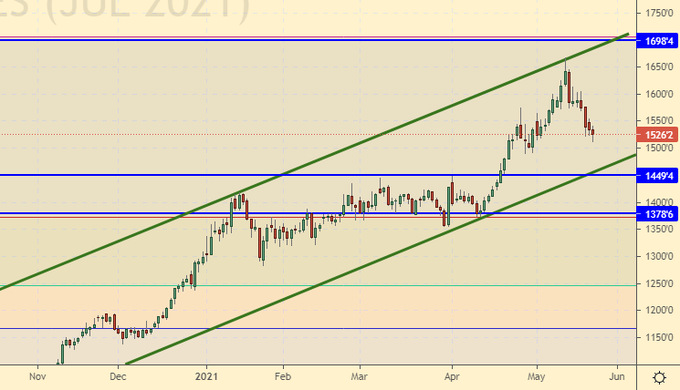 Growth scenario: July futures, expiration date June 30. We continue to view the rollback to 13.50 as a working version. In case of a fall in prices in this area, we will buy.

Fallштп scenario: it’s too late to do something here. You just have to wait. If there is a pullback to 17.50, you can build up the short. Recommendation: 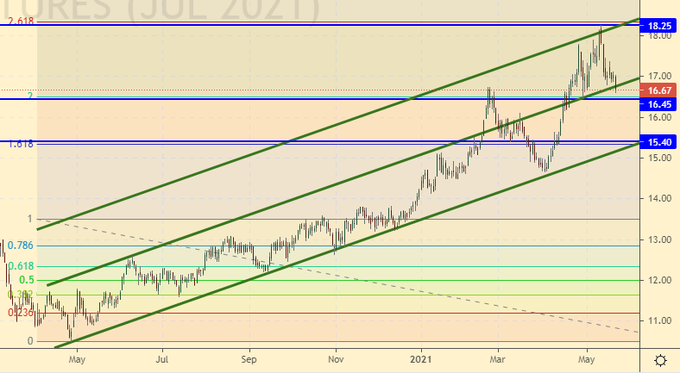 Falling scenario: the picture has not changed in a week. If we go below 143.00, we will fall to 136.0. This assumption will remain our working scenario. Recommendation: 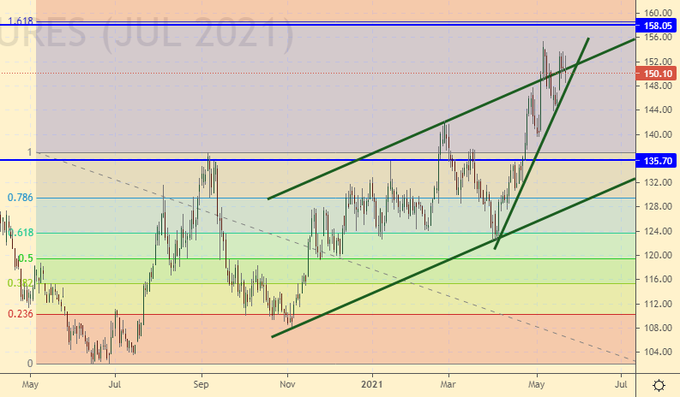 Buyers continue to lose interest in the oil market, while sellers, on the contrary, find money for collateral and go short. The fact of signing an agreement with Iran on a nuclear deal could derail the market next week.

Growth scenario: May futures, expiration date May 28. We really want to see the area 50.00. You can buy there. From the current situation, in theory, a passage at 75.00 is possible, but this is hard to believe, since there are no fundamental drivers for growth.

Falling scenario: if next week we go below 60.00, it will be an undoubted success for sellers. The preconditions for the fall have been created. 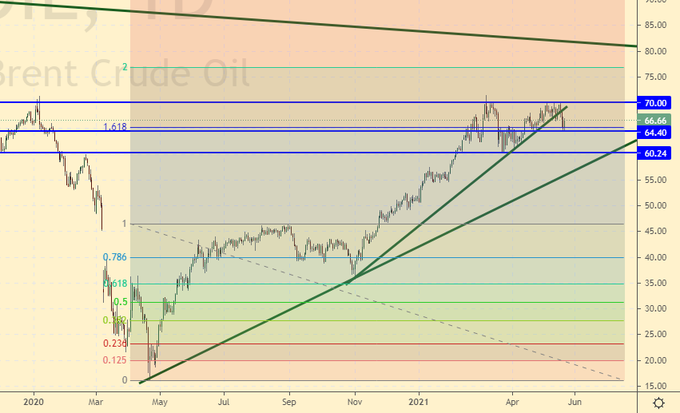 Fundamental US data: the number of active drilling rigs increased by 4 to 356. 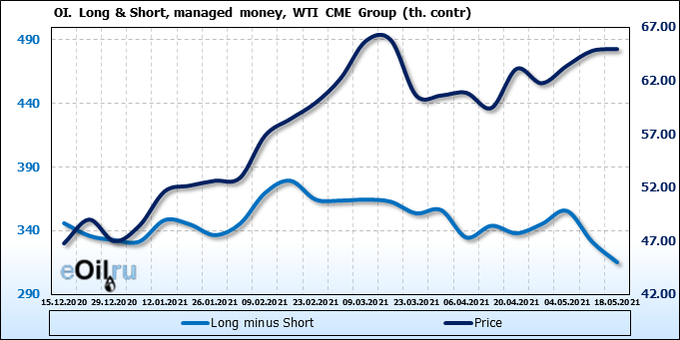 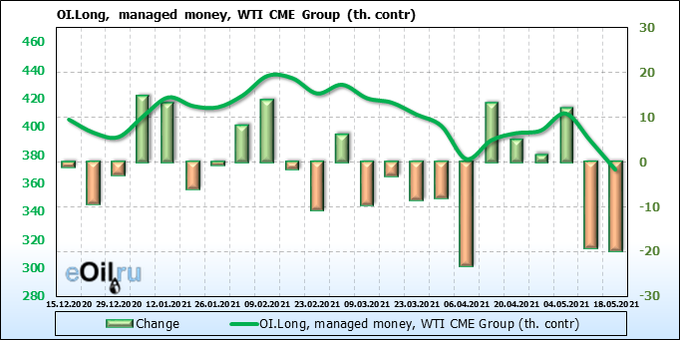 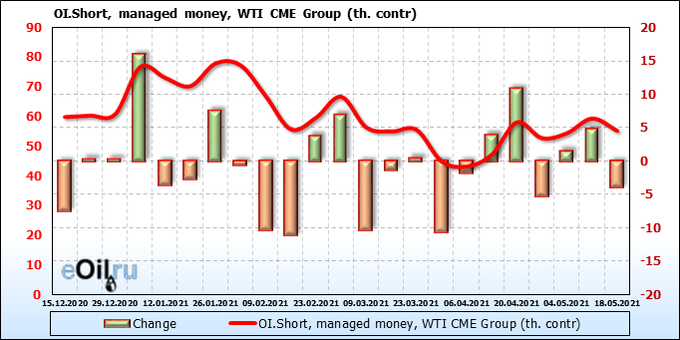 Buyers are gradually giving the initiative to sellers, as all the factors of growth, such as: planetary vaccination and the possible rise of the US and EU economies, are already in the price. In addition, OPEC countries do not need too high oil prices. As prices rise, they will increase production, increasing their market share.

Growth scenario: July futures, expiration date June 22. The current breakdown of the support level is extremely unpleasant for the bulls. Let’s not wonder if we will ever get to the 70.50 mark. We will refrain from shopping.

Falling scenario: short from current levels looks good. We will enter the market with the prospect of visiting the 46.00 level. 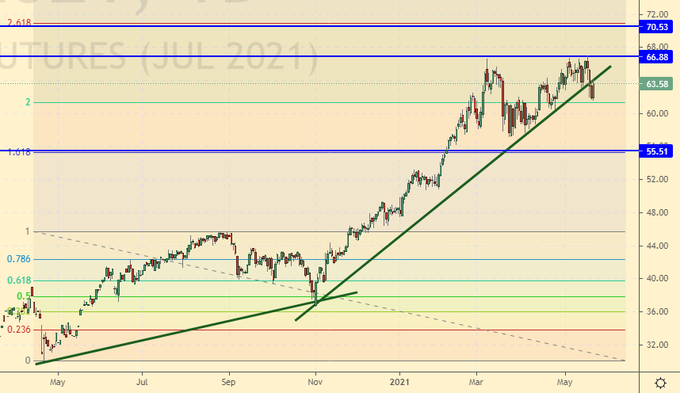 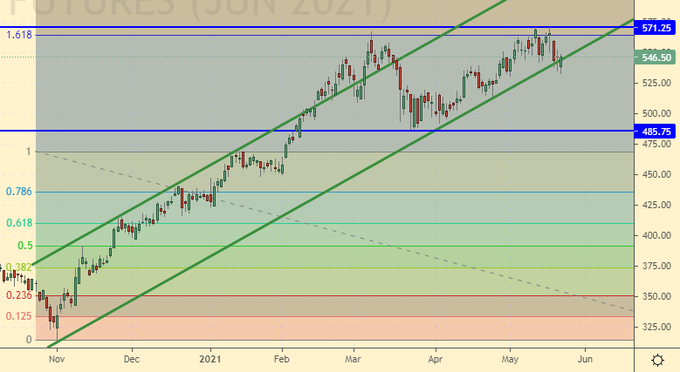 Falling scenario: the support is clearly not broken. Prices returned to the channel on Friday. Those who entered the short from 540.0 are holding positions, the rest are waiting for a second pass below the level of 540.0.

Growth scenario: July futures, expiration date June 28. We observe the expected rollback. Most likely, prices will be able to reach 2.800, after which the growth will continue.

Falling scenario: patiently awaiting the arrival of prices to 3.500. We will think about sales there. The current situation is of no interest for entering a short. 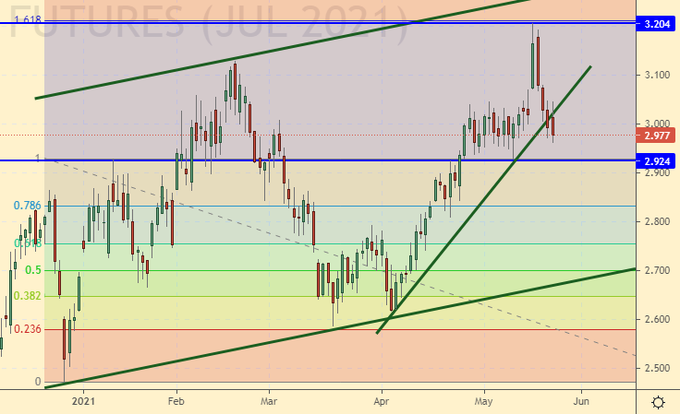 Growth scenario: congratulations everyone on the good trend from 1765 to 1888. Now we would not refuse a pullback to 1810, after which we could buy again. Growth scenario to 2000 without any correction is better to work out on hourly intervals. Falling scenario: sell here. The chances are not great, but if there is a pullback, we will get a good profit / risk ratio on the trade. 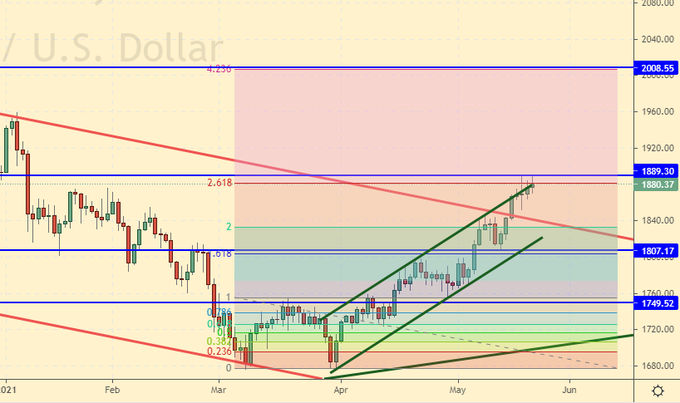 Growth scenario: the euro does not want to give up its positions yet. The number of initial applications for unemployment benefits for the week decreased to 444 thousand. The indicator is not bad for the current situation, but it is still twice as high as before the pandemic. For now, we are betting that Powell will not raise rates on June 16.

Falling scenario: we will refrain from selling, as prices are in a growing price channel. Passage to 1.2800 is quite probable. 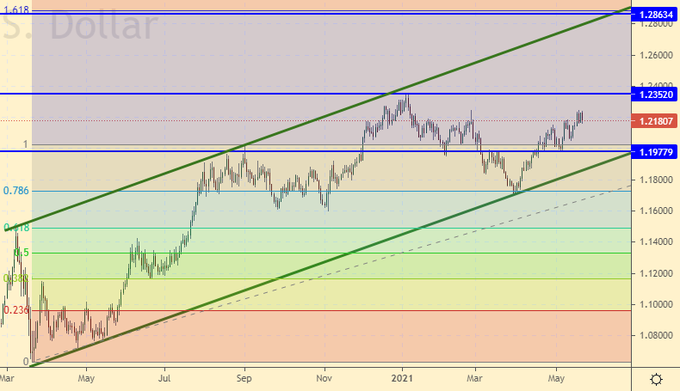 Growth scenario: if Iran begins to increase oil production unilaterally after signing the nuclear deal, without coordinating its position with OPEC, then oil prices will fall. It cannot be ruled out that Washington’s plan is to use Iran as a Trojan horse within OPEC to destroy the entire structure of the cartel. Trump also threatened to sue all the participating countries for the non-market pricing mechanism.

According to rumors, the Americans have promised Iran a lot of privileges. In Tehran, literally everyone, including the president, is optimistic about the future.

The ruble does not need a drop in oil prices. And fear about this has appeared on the market. Therefore, if we see the strengthening of the national currency next week, it is unlikely to be explosive.

Falling scenario: sell here. The move to 72.50 is seen in the current situation. Reaching the 71.20 level is also possible if oil prices remain above 60.00. 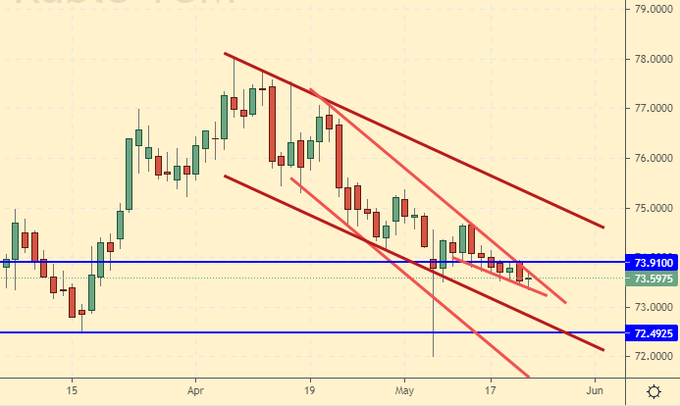 Growth scenario: futures on the RTS index may go down to 165,000. Climbing higher will not be easy. One of the problems is the lack of prospects for an increase in the purchasing power of the population. At this stage, it must be stated that the rise in food prices has reduced the ability of households to purchase durable goods. Only grocery chains have benefited from what is happening.

Falling scenario: while the market does not fall, the situation remains precarious. It is possible that until August, against the background of the Fed’s soft policy and the optimistic background in the West, we will continue to be above 150,000. Recommendations: 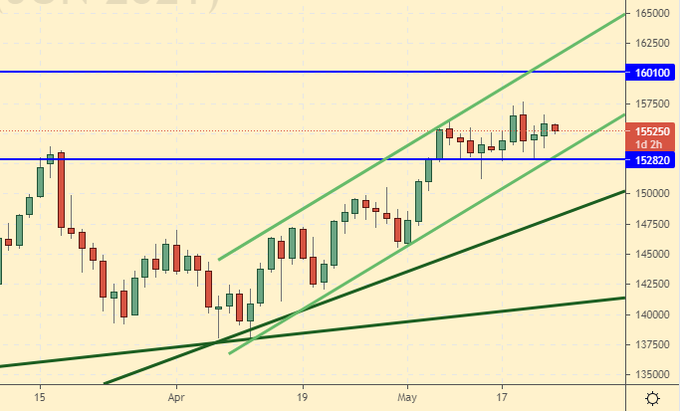