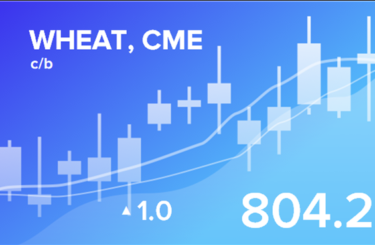 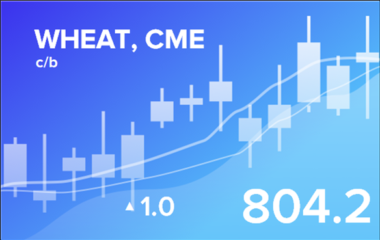 Noiseless Indonesian summits. The Americans failed to force China to publicly kneel, but their leaders shook hands, after which the Hong Kong stock exchange index rose by 4%. And our stock market grew for four weeks on its own, without the blessings of an overseas grandfather.

Russia extended the grain deal despite the fact that, according to people familiar with the situation, the export of its own products and fertilizers from Russia is artificially complicated by Western countries.

If there had been no extension of the deal, then prices would definitely have risen. Now, the grain market may expect a correction of 5-10%. Note that there will not be a strong fall in prices, since the cost of growing grain has increased this year by 15-30%, depending on the region.

It is clear that now it is impossible to conduct autumn sowing on part of the territory of Ukraine. Most likely, the confrontation with Russia will lead to a drop in the grain harvest next year, which will ultimately mean a decrease in supply on the external market from Kyiv to insignificant values. Awareness of this fact supports quotes on the exchange market.

Domestic prices have stabilized at low levels. It can already be assumed that before the start of the next season, about 20-25 million tons of grain will not be exported from Russia. This could lead to an extremely negative economic environment for farmers, who will expect to take profits in the fall of 2023. The country may find itself in a situation of significant overproduction of grain. However, one can be glad for the producers of poultry and pork. Feed will be as cheap as possible.

So, a sabotage was committed on the Nord Streams. This was honestly stated by Swedish researchers and investigators. It remains to answer the question «Who was it?» But here we are unlikely to know the answer. Everything will remain shrouded in the darkness of mystery. Well, here it is. Pipes blew up. Yes, this appears to be possible. A postage stamp dedicated to this event should be issued.

Western dreamers continue to fanatically move towards an embargo on Russian oil supplies to Europe. It is possible that production in the Russian Federation as a result of this step will fall by 10%, but at the same time, gasoline prices in Europe will increase by at least 30%. Yes, then the Arabs will learn how to deliver 1 million barrels of oil per day, this is the same amount supplies from Russia will be reduced. A number of European governments may not wait for energy carriers from sympathetic countries. They will be replaced by the masses. All on bicycles, gentlemen — comrades.

Inflation in Europe is not decreasing. According to official data, prices have risen by 10.6% year-on-year, which will reduce the demand for goods and services that are far from essential: expensive wine, cheese, cellulite injections in the thighs, teeth whitening, as well as dog grooming, cutting one’s own heads, peeling and washing will have to be postponed until better times.

The Western world is waiting for a recession, which will lead to a reduction in oil consumption. It is possible that Brent oil will soon fall to the level of $78 per barrel, but it will not be easy to go lower, as OPEC will hasten to announce a new production cut.

So far, we are standing at the level of 60 rubles for one green American dollar. We can expect a downward penetration to 59.50, a stronger strengthening is hardly possible now.

Note that after the weakening phase, the dollar index will grow for the next ten days, which will lead to pressure on the commodity sector. Strengthening will occur against the backdrop of reports that the Fed may raise rates up to 7%.

At the moment, there are more open short positions of asset managers than long ones. Sellers control the market. Over the past week, the difference between long and short positions of managers increased by 4.1 thousand contracts. Buyers were reluctant to leave the market, and sellers were also reluctant to enter it. The spread between short and long positions has slightly widened, sellers retain their advantage.

Growth scenario: consider the December futures, the expiration date is December 14th. We will continue to recommend purchases from current levels. If the market fails to break below 790.0, then this will lead to a strong increase in quotes.

Falling scenario: last week those who wished could enter short from 840.0. It makes sense to be short in anticipation of a fall towards 700.0. 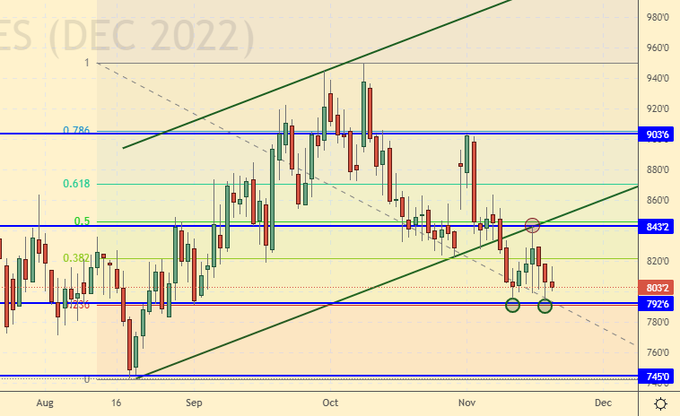 At the moment, there are more open long positions of asset managers than short ones. Buyers control the market. Over the past week, the difference between long and short positions of managers has decreased by 56 thousand contracts. Buyers fled the market, sellers cautiously entered it. The spread between long and short positions has narrowed, the advantage of the bulls has become less strong.

Growth scenario: consider the December futures, the expiration date is December 14th. For now, we can’t rise from 650.0. There are still chances to move up, but the bulls need to be more proactive, otherwise there is a risk of losing the advantage.

Fall scenario: sellers may attack from current levels to break below 640.0. If this happens, then a fast move to 600.0 will be possible. A fall to 550.0 cents per bushel is not ruled out. 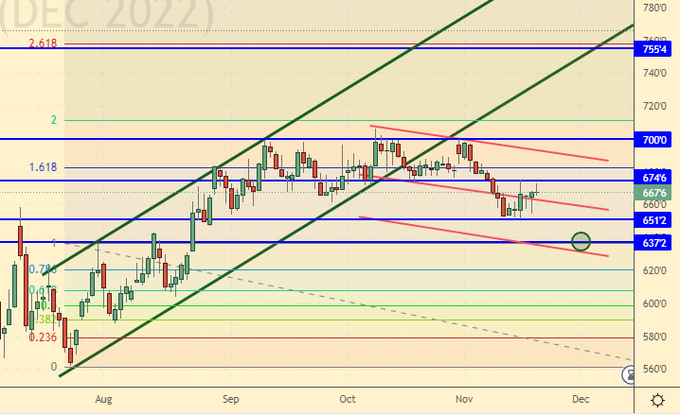 Growth scenario: consider the January futures, the expiration date is January 13th. In this situation, you can insist on buying. Let’s go long again.

Fall scenario: The market has gone down from the level of 1465, but the fall does not look convincing. We keep shorts, we do not open new positions. 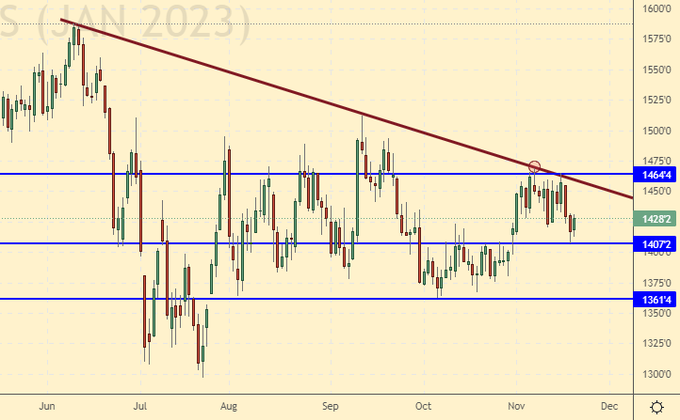 Growth scenario: we consider the March futures, the expiration date is February 28. WE were not mistaken in our assumption that the market would pull back. The only thing is that he did it a little higher, but we still took our money from him. We will buy again when we approach 19.00.

Fall scenario: when approaching 21.00 it will be interesting to sell. Short from current levels is possible provided that you are not greedy and leave when the market approaches the level of 19.00. 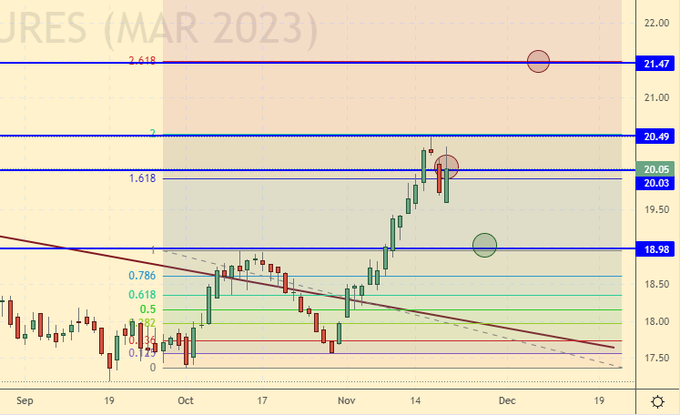 Growth scenario: consider the December futures, the expiration date is December 19. The market failed to stop at 160.0 and continued to fall. This came as a surprise to us. We keep previously open longs, we do not open new ones.

Fall scenario: we are in oversold. There are signs of a downward rally. There are no interesting levels to enter shorts. Out of the market. 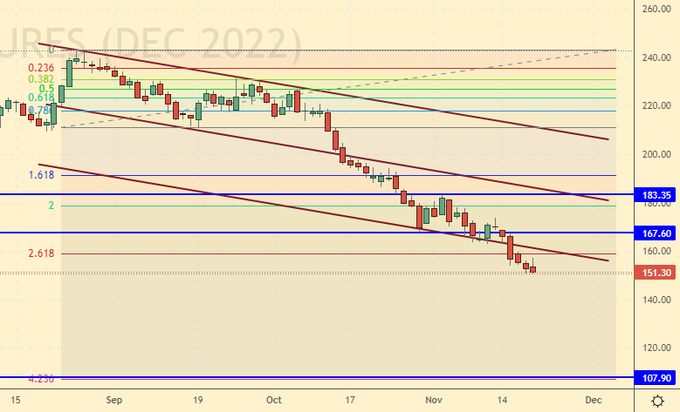 At the moment, there are more open long positions of asset managers than short ones. Buyers control the market. Over the past week, the difference between long and short positions of managers decreased by 27.2 thousand contracts. The change is significant. The bulls actively left the market, the sellers reluctantly entered. The spread between long and short positions has narrowed, and the bulls continue to maintain control.

Growth scenario: we are considering the November futures, the expiration date is November 30th. The market failed to hold above the 90.00 level. We take a break, now we do not buy. 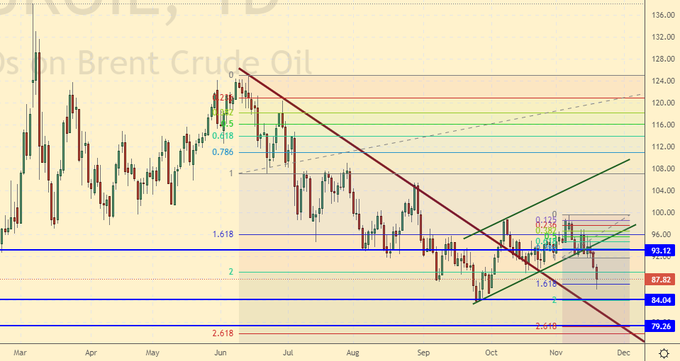 US fundamental data: the number of active drilling rigs increased by 1 unit and now stands at 623 units.

Growth scenario: switched to January futures, expiry date 20 December. The chances of growth from the current position are minimal, but they are. It makes sense to buy here, as the profit/risk ratio is at the level of 4 to 1.

Fall scenario: The market is looking to break below the support line. If the 76.00 area fails, then we will have a fast move to 67.00. 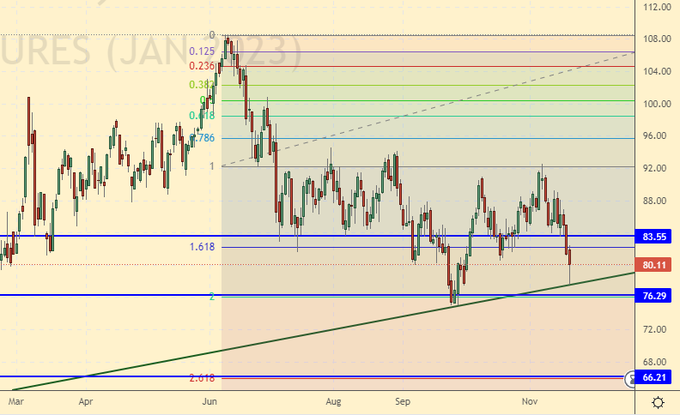 Growth scenario: consider the December futures, the expiration date is December 12. Who bought from 930.00, keep long. We do not open new buy positions. Gasoline stocks in the US are at their lowest levels in the last 8 years. There may be surprises.

Fall scenario: until we fall below 900.0 we will not sell. Note that there is a shortage of physical supplies. We must not fall. 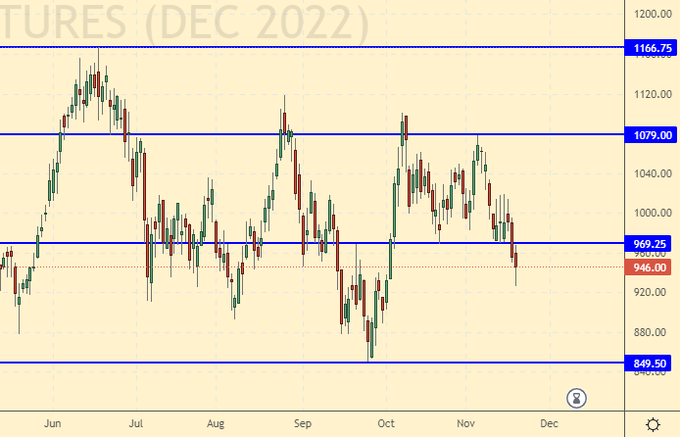 Growth scenario: we are considering the December futures, the expiration date is November 28. As long as we’re in range. However, let down against the backdrop of a natural drop in temperatures will now be difficult. We will either stand or grow.

Fall scenario: we continue to refuse sales. Movement to 5,000 is theoretically possible, but it is unlikely that it will be possible to go lower until a dialogue between Russia and the United States is established. 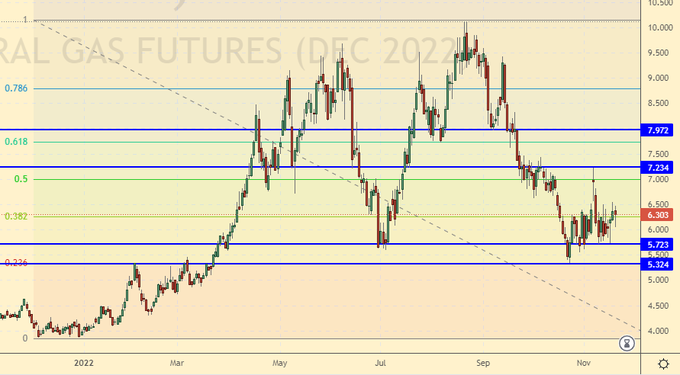 Growth scenario: We hit the first target at 1785. A pullback to 1680 should now follow, after which the uptrend could continue.

Fall scenario: here you can enter short with the target at 1685. The expediency of this step must be realized for yourself. 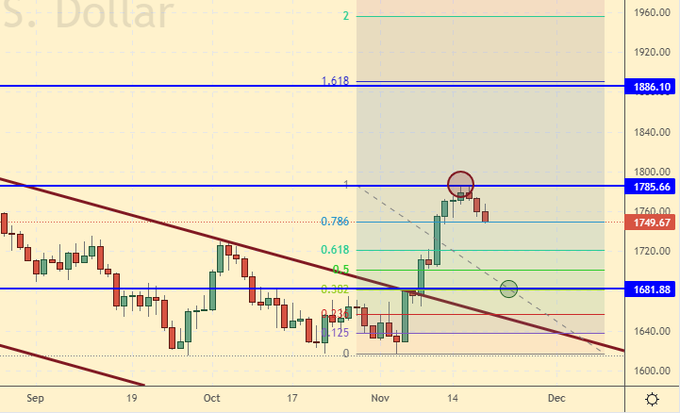 Growth scenario: inflation in Europe is rampant, however, the ECB is in no hurry to raise rates. We do not deny the possibility of growth to 1.0600, but a higher rise is not obvious.

Fall scenario: we will definitely sell when we approach 1.0600. The current levels are also interesting, but to a lesser extent. 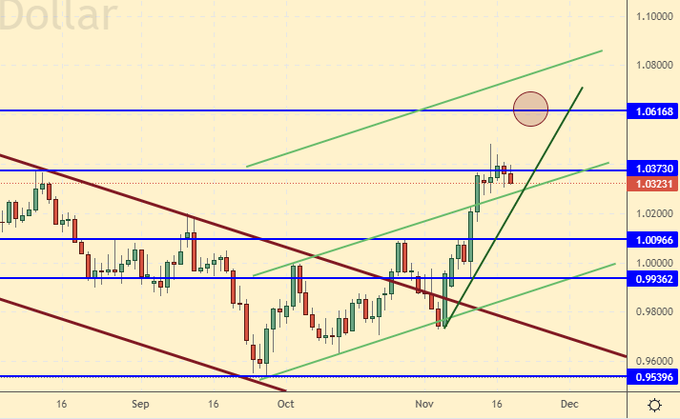 Growth scenario: The meeting of the leaders of the twenty leading countries took place without big surprises. Like a week earlier, there are still chances for the pair to fall to the level of 59.50. From this mark it will be convenient to buy.

Fall scenario: The move at 50.00 looks like something incredible. At the same time, technically the situation has some risk. Therefore, let’s go short with a short stop order. The market may surprise you. 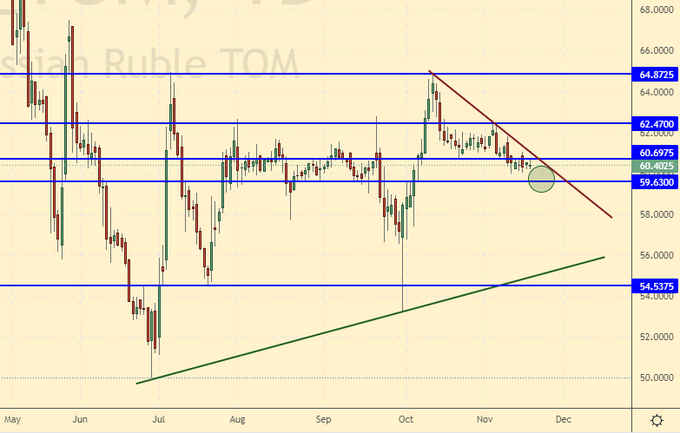 Growth scenario: consider the December futures, the expiration date is December 15th. We will continue to hold longs in anticipation of a move to 120000. We cannot deny the possibility of a corrective move to 103000, so we will move the stop order closer to the current levels.

Fall scenario: when we approach the level of 120,000, we will sell. Shorting from current levels does not look like an ideal solution, but it is also possible. 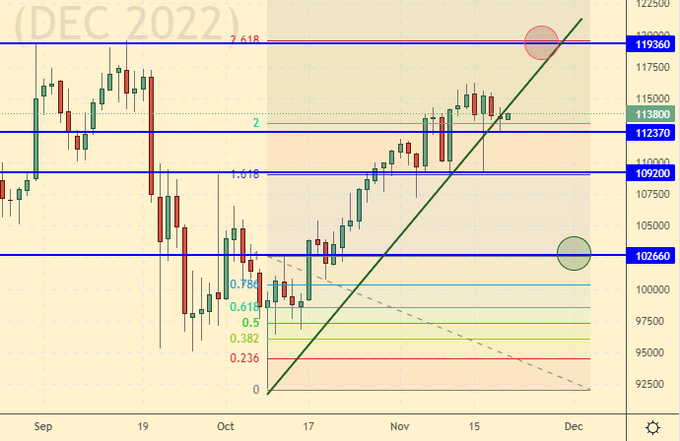