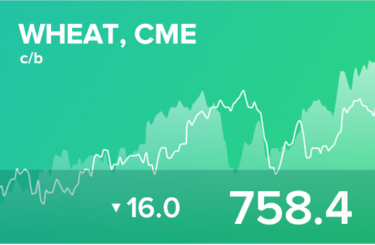 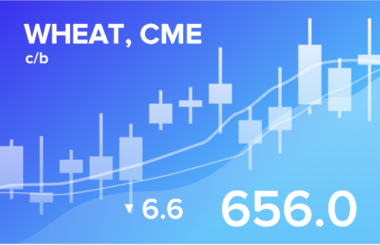 Since in general the weather conditions remain favorable for the ripening of the future harvest, grain prices have moved down. Drought in some regions of the United States will bring its negative, but on a global scale it will be blocked by the successes of other countries.

It won’t be surprising if the wheat market declines ten percent over the next three weeks. But a stronger fall will be unexpected. Then it will be necessary to ask the question of where is the huge demand, almost on a par with the gross harvest, which was predicted in the spring.

The rise in freight costs has been alarming in recent weeks. Since grain importers are not ready to bear additional costs, grain traders will have to reduce their own ambitions.

By reading our forecasts, you could have made money in the gold market by taking a move down from $ 1850 to $ 1763 per troy ounce.

The last Fed meeting on the 16th triggered the strengthening of the US dollar, which led to a cooling of the entire commodities sector, and oil was no exception.

Most likely, the growing dollar index will not be able to influence the oil market for a long time, but within a few days it can contribute to a correction.

The moral adaptation of society to restrictive measures due to the virus reduces anxiety about possible disruptions in the production, transportation and processing of oil, which should somewhat smooth out fluctuations in the market.

Even if the demand for energy resources really continues to grow, it is unlikely that we will see a sharp rise in prices. Yes, there are already statements about $ 100 per barrel, but one should not forget about the huge reserve on the part of OPEC for production capacities. If necessary, more than 5 million barrels per day can be supplied to the market within one to two months.

The sighs that, somewhere in the distant West, large companies have not invested in exploration and modernization for the past 10 years, just as abundantly as they did in the 2000s, you can hardly listen as long as we have Saudi Arabia and partners.

By reading our forecasts, you could have made money in the gold market by taking a move down from $ 1850 to $ 1763 per troy ounce.

The meeting between Putin and Biden took place. Limousines, planes and separate press conference. Note that, in fact, the American grandfather was not as helpless as our media presented him. The main thing is that after the summit, no one had bruises under their eyes, due to overwork, of course. Everything went more or less smoothly. That is why the ruble is in no hurry to actively fall ahead of the dollar following the euro, although hints of weakening have appeared.

After the surge in prices for raw materials, we should expect overstocking of warehouses for processors in the next three to six months, which will lead to a cooling of prices for the commodity group, and this may negatively affect the ruble exchange rate.

On June 16, the FOMC reacted sluggishly to the rise in inflation. The concern was highlighted in the press release, but nothing more. The current strengthening of the dollar is a large advance for the American currency, since in fact there is no question of any rate hike in 2021. Looking ahead for more than six months in the current environment seems to be a bit rash. And to talk publicly about what will happen there in 2023, which is what the Fed is doing, is simply pointless.

Growth scenario: July futures, expiration date July 14. The buyers did not hold the situation and sagged. The engulfing combination of the last two daily candles from 637.0 does not cause much emotion, since there is a threat of a breakdown of the extended support line. Sellers won’t just give up. Out of the market.

Falling scenario: when approaching 680.0, you can catch on the short. 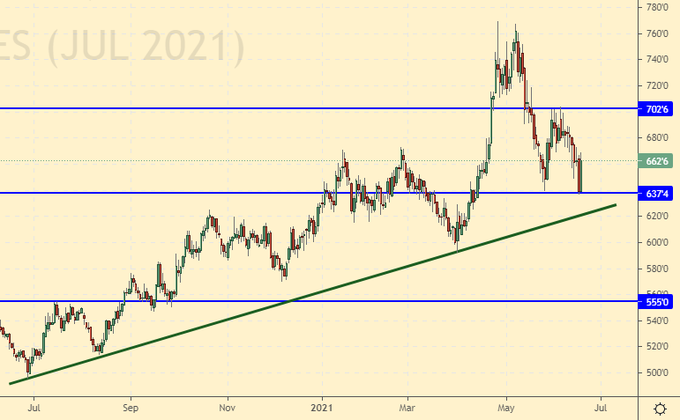 Growth scenario: July futures, expiration date July 14. The bulls only indicated their ambitions to visit the 800.0 level, but for now they will have to be postponed. We do not buy.

Falling scenario: «we will enter short after falling below 665.0», — we wrote a week earlier and hope you did so. Corn quotes are clearly overestimated. We keep the shorts. 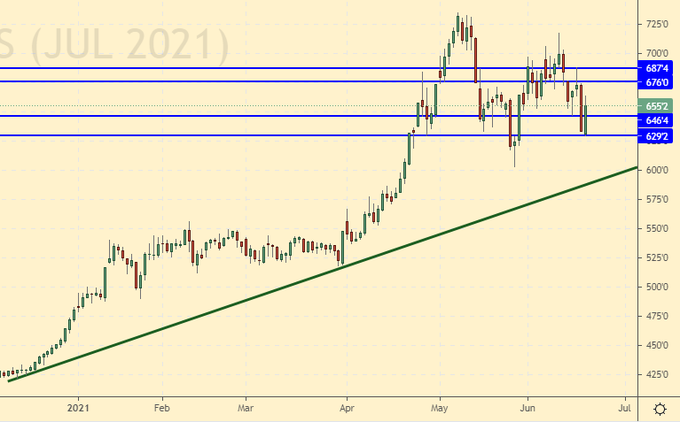 Growth scenario: July futures, expiration date July 14. We did not buy, counting on a correction. Level 1300.0 is not enough for us. But buying from 1152.0 will make sense. 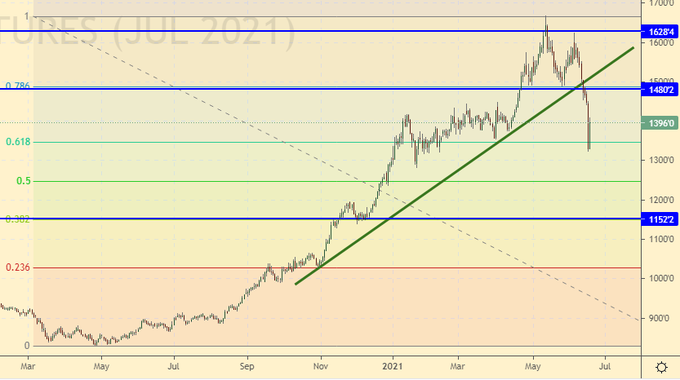 Growth scenario: July futures, expiration date June 30. They did the right thing that they did not buy for a month. Here we have a correction, which is very likely to reach 15.33. We will think there.

Falling scenario: our persistence with sales from 18:00 paid off. We will keep the shorts in the expectation that the 15.30 area will not withstand and we will fall to 13.70. 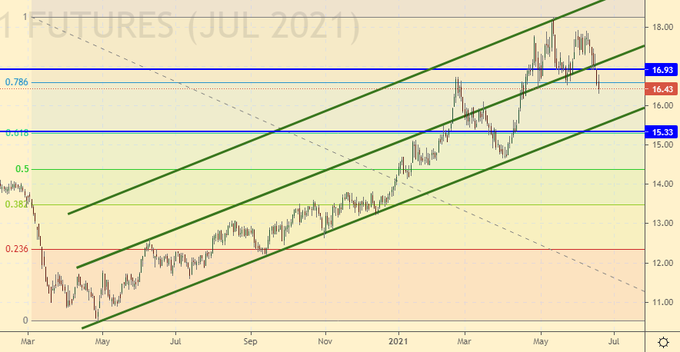 Growth scenario: July futures, expiration date July 20. We waited for a rollback. I would like to see a fall to 135.00 in order to enter the long there.

Falling scenario: we have to admit that we didn’t manage to catch the short. If there is an increase to 154.00, we will sell. 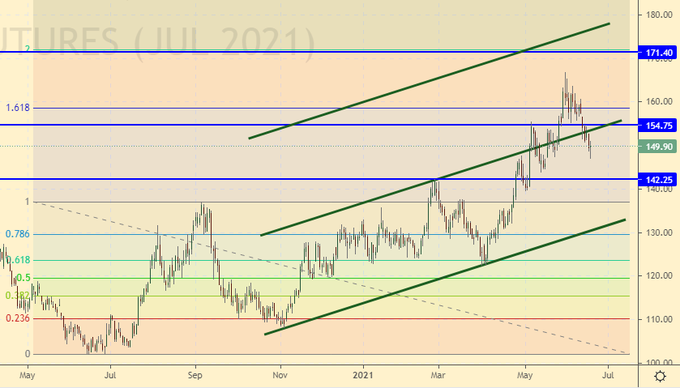 Bulls continue to enter the market, which limits the fall against the background of the strengthening of the US dollar. There are few sellers, which means that in the current situation we have no great prospects for a fall. You can count on a corrective move, but not on a trend reversal.

Falling scenario: sales from 76.20 will definitely be with us. Short from current levels looks optional. 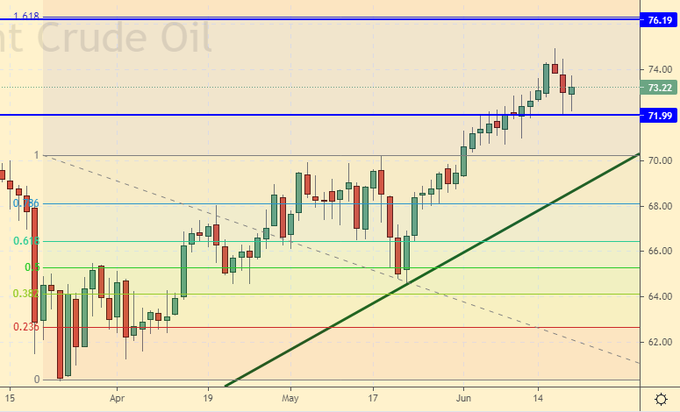 Fundamental US data: the number of active drilling rigs increased by 8 units to 373 units.

Growth scenario: August futures, the expiration date is July 20. We switched to August futures. By the Fibonacci levels, we see that the upward impulse is complete. Yes, there is an option to move to 96.00, but before this action I would like to see a pullback to at least 64.00.

Falling scenario: we will continue to insist on selling from the current levels. If you get knocked out of the short, log in again. Who is in position in the July contract, shift to the August one. 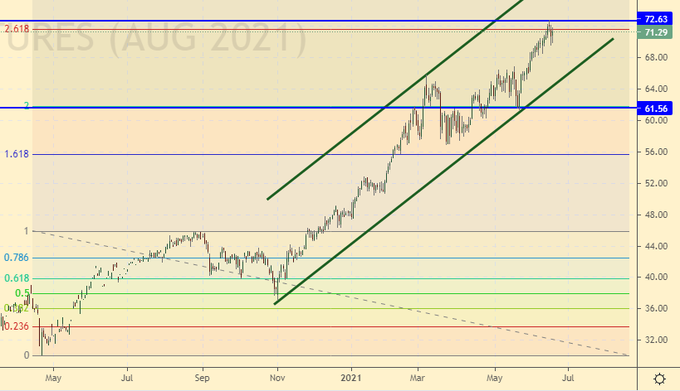 Growth scenario: July futures, expiration date is July 12th. The market continues to look aggressive. We will keep longs. The move to 729.00 is not obvious, but possible.

Falling scenario: stop at 607.00 survived. The maximum was at 606.0. Since the short survived, then let it stay on. Let’s see how the case ends. 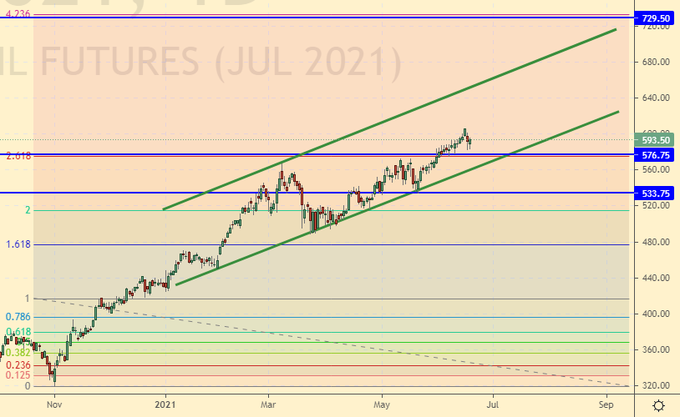 Falling scenario: we will not sell yet. The market has settled in a growing channel, let’s not interfere with living in it. 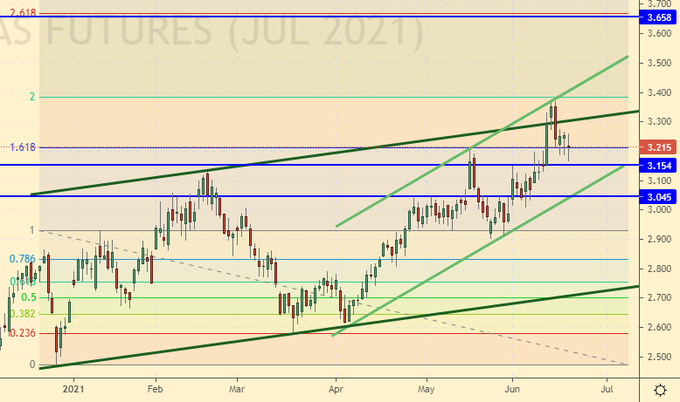 Growth scenario: gold was discharged after the Fed meeting. Well … you have to believe your eyes. Let’s buy here. The strengthening of the dollar does not seem necessary in the current situation.

Falling scenario: we fell below important support at 1850. Hopefully you went short with us. Since the market fell very quickly, it is necessary to take profits here. A pullback to 1800 is very likely. Recommendations:

Sale: thinking while rising to 1844. All with a profit! 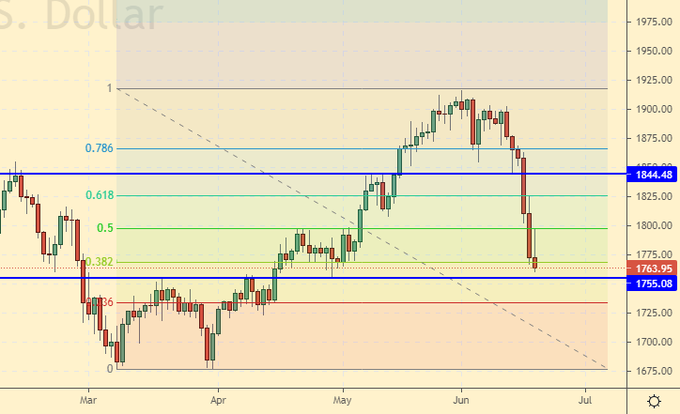 Growth scenario: «if the pair falls below 1.1950, then the euro bulls will have difficult times, » we wrote a week earlier. In fact, it turns out. The euro could not withstand the distant prospects for rate growth in the United States, already in 2023, and decreased. At 1.1500 and 1.1000, you should think about buying. 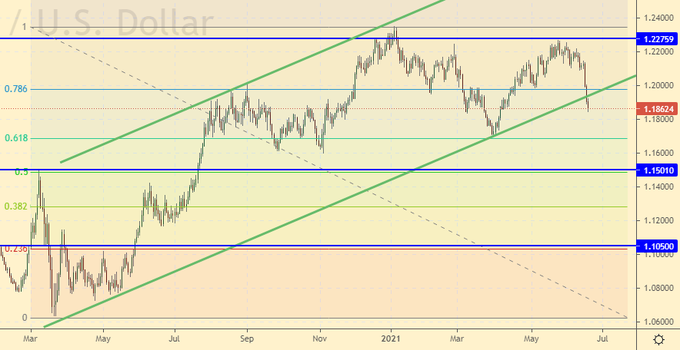 Growth scenario: we see that the bulls are trying to turn the market up. Perhaps we will grow to 74.00, stronger growth is possible only after the oil price falls. The even results of the Putin-Biden meeting play into the hands of the ruble. There is no prospect of a strong weakening of the national currency at the moment. Do not forget about the Central Bank rate of 5.5%, which should have a positive effect on the demand for Russian debt securities despite the US sanctions.

Falling scenario: keeping short becomes unpleasant. The levels of stop orders are already below the entry point, so we can be patient. Otherwise, the position would have been liquidated at current prices. 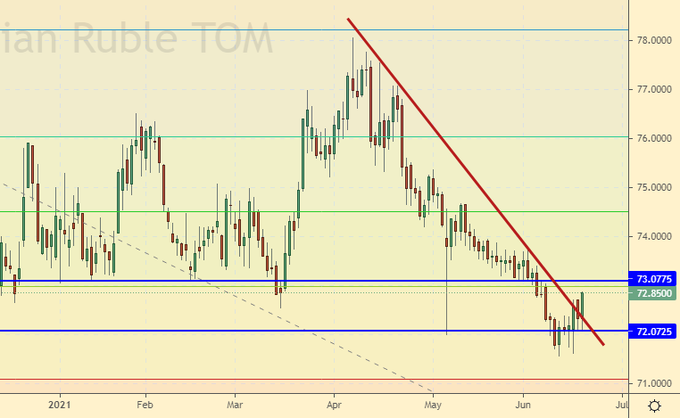 Growth scenario: a stronger dollar triggers a drop in investor enthusiasm in the stock market. On Friday, the SP500 issued a long red candlestick downward, which could be the start of a sell-off. Let’s tighten the stop order of our purchases closer to the current prices.

Falling scenario: most likely the market will go below 160,000. Let’s bet on this event. Let’s go in short. 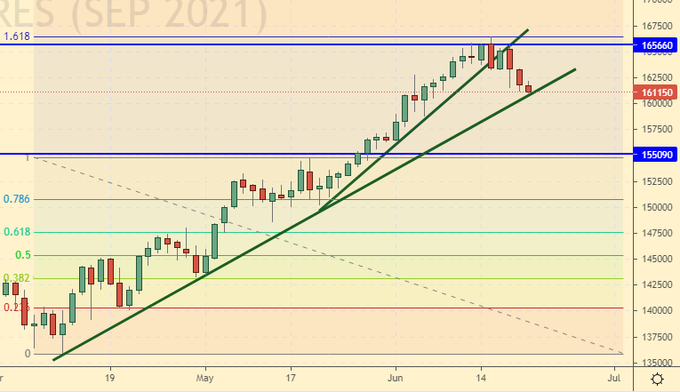