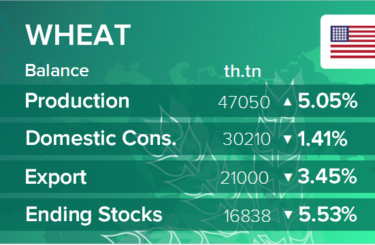 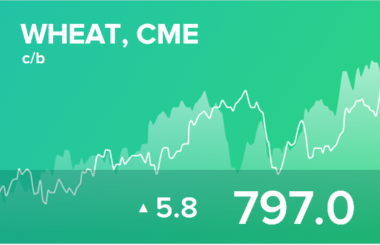 «We will impose sanctions on you,» they say in the West.

«We’ll put something on you too,» they say in Moscow. This is the vein in which current events in the field of geopolitics are developing.

Our Olympics are over and this can untie the hands of the parties to the conflict in eastern Ukraine. Yes, and Comrade Xi will tear himself away from the TV. For example, he will go to Taiwan as part of the concept of one China. And gold will continue to rise in price.

In the current situation, grain will not fall. Until the situation in the Black Sea region normalizes, no one will bet on a fall.

Judging by the fact that people have begun to leave the conflict-affected areas, the situation is only getting worse so far. There is little faith in the media now, a lot has to be thought out. In any case, traders will not press «sell» during the exchange of shells between the parties.

In Europe, voices began to be heard that we can stop stretching out the olive branch of Peace to Russia, and start punishing economically. Sanctions on the high-tech and energy sectors could be a problem. But they will still be included. It didn’t work out with the pandemic, then the deterioration in the state of affairs in the economy of the EU and the USA should be attributed to Moscow, or to China, or to someone else. Here, on Erdogan, for example. But it is still small, therefore, either China or Russia. By the end of the year in the US, it is very likely that we will see stagflation. And then the world will shake.

The 22/23 agricultural season will pass without problems, even with expensive fertilizers, but the 23/24 season, while maintaining high prices for materials and components, may become a crisis in terms of reducing consumption. Inflation will force households to consume less. Including food. Thus, we will not see a strong drop in food prices this year, since everyone is scared, but next year we can roll back down from new highs that we have yet to set.

Oil is in no hurry to roll back down, although Iran may almost tomorrow sign a new agreement on the JCPOA and abandon the development of nuclear weapons. It is likely that Washington quickly made concessions to Tehran on a number of positions, since the West needs an alternative to oil supplies from Russia, with which relations have not been developing recently. It is no secret that Iran, with the assistance of Western experts, can increase oil exports by 1.5-2 million barrels per day within 6-8 months, which will solve the problem of shortage in the market by almost 40% if the West refuses to import Russian raw materials.

With the prospect of a full-fledged return of Iran to the oil game, OPEC hastened to declare that there is no need to rejoice. Iran will be put on a deal to control production. And most likely Tehran will not quarrel with the whole cartel, plus Russia, and will accept the terms of the game. Ultimately, the more expensive oil, the same Persians are better off. For example, the level of 110.00 for Brent is not so far away. There were attempts to turn the market down last week, but they ended in nothing.

What to say about the ruble. He is, you can go and buy something in the store. And that’s not bad. Will it fall against the dollar? Probably yes. Strongly? Most likely no. The Central Bank can easily sell currency from its reserves to all those who suffer, the only question is whether it wants to do it.

If the authorities do not intervene when the rate rises above 80.00, it will be sad, sad for the people. If the crisis in Ukraine and the crisis along the Russia-NATO line are somehow resolved, then we will have 68.00 rubles per dollar, and possibly 65.00.

Over the past week, the difference between long and short positions of managers increased by 4.6 thousand contracts. Speculators continue to stubbornly build up shorts, but this can lead to problems in the future. A sharp rise in prices is not ruled out, provided that the growth is above 820.0 cents per bushel.

Growth scenario: March futures, the expiration date is March 14. We will keep longs. In case of growth above 820.0, you can add.

Falling scenario: you can enter short here. The chances of success are low, but if the crisis in Ukraine slows down, then some cooling in the market is also possible. 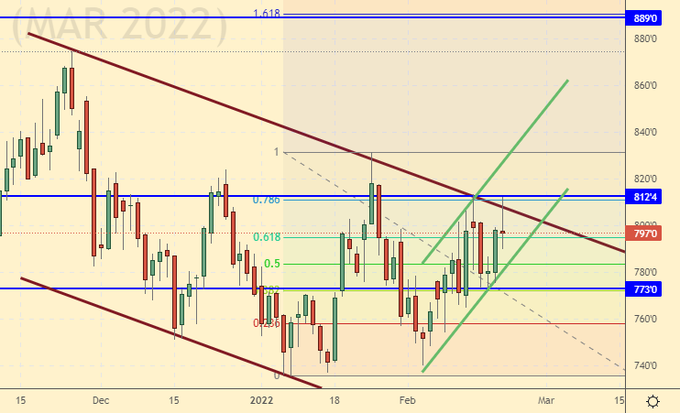 Last week the difference between long and short positions of managers decreased by 11.3 thousand contracts. A small part of the bulls chose to leave the market, but the majority continues to firmly believe in rising prices.

Growth scenario: March futures, the expiration date is March 14. We continue to hold previously open longs. We do not open new positions.

Falling scenario: no change in the market. When approaching 685.0, it is mandatory to sell. Sales from current levels are perceived as premature. Recommendation: 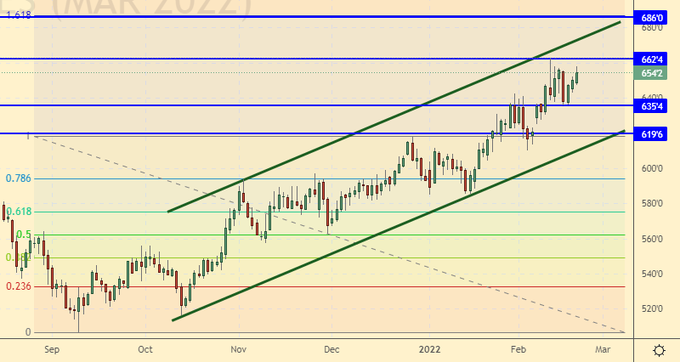 Growth scenario: March futures, the expiration date is March 14. We continue to expect a rollback. Current levels are extremely high.

Falling scenario: nothing has changed. When approaching 1640.0 sell. A sharp pullback is likely. 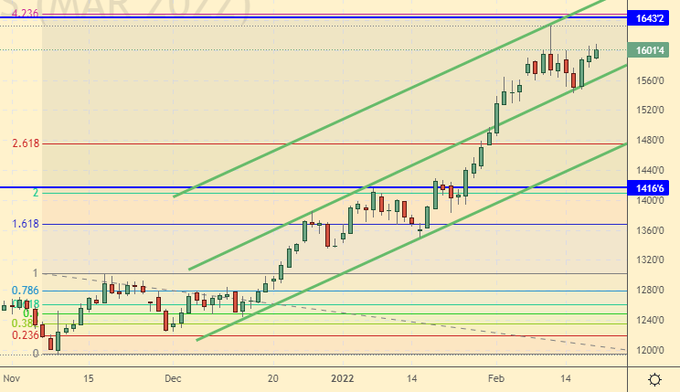 Growth scenario: May futures, the expiration date is April 29. An interesting «pennant» is drawn. In case of its breakdown upwards, we will leave at least by 20.00. Here you can buy. In case of growth above 18.70, you can add to the longs.

Falling scenario: our opinion remains the same: only around 20.00 will we think about shorts. The current levels for entering shorts are not interesting. 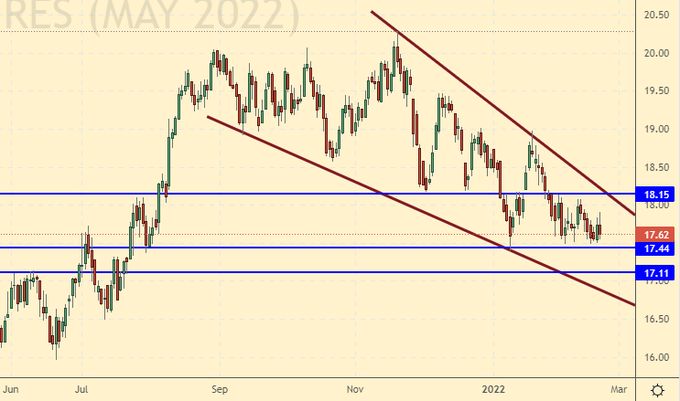 Growth scenario: March futures, the expiration date is March 21. We keep long. If we are closed on the stop, we will not grieve, since it is close to the entry point.

Falling scenario: if prices leave the growing channel down, then we will move to the 200.00 area. It makes sense to sell. 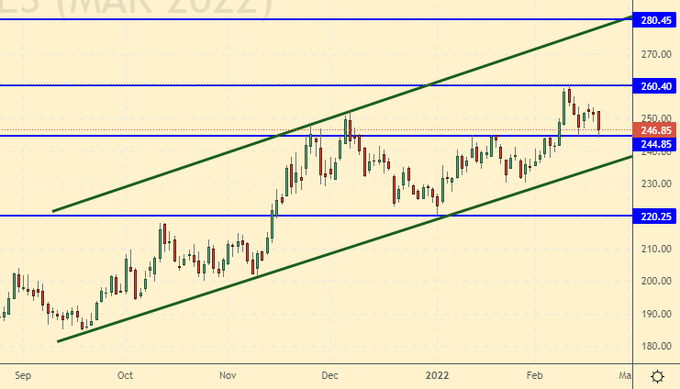 Growth scenario: keep longs. We do not see any attempts to turn the market down. And most likely they won’t.

Falling scenario: shorting gold will be possible after falling below 1790 while out of the market. Yes, and how we will fall against such a political background…

Sale: think after falling below 1790. 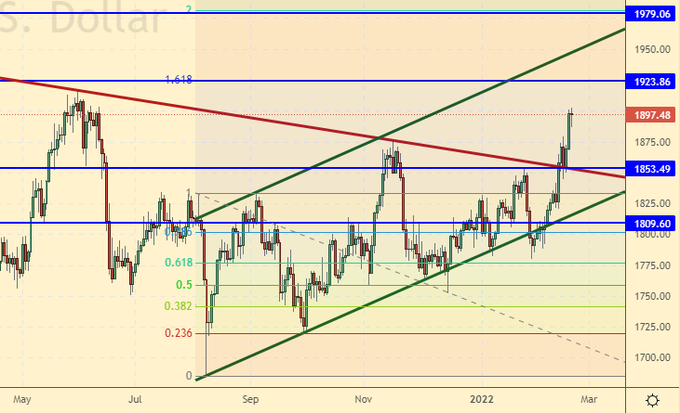 Over the past week, the difference between the long and short positions of managers increased by 1,000 contracts. Bulls continue to confidently control the market. However, both sellers and buyers reduce the volume of their positions, the uncertainty is growing.

Growth scenario: February futures, the expiration date is February 28. Failed to consolidate above 96.00. In case of another upward breakout, we will buy.

Falling scenario: in terms of technique, you can go short here. Note that there is little chance of falling. 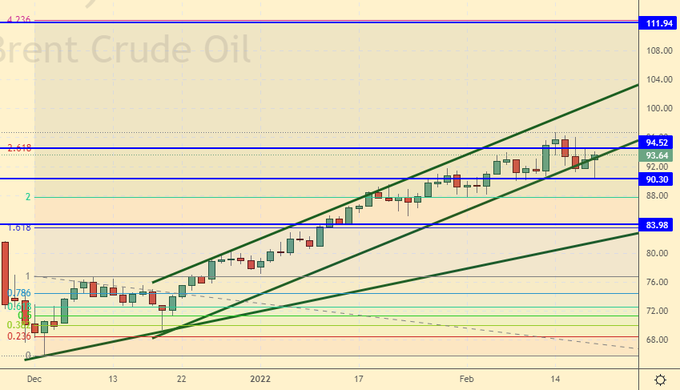 US fundamental data: the number of active drilling rigs increased by 4 units and now stands at 520 units.

Last week, the difference between long and short positions of managers decreased by 7.2 thousand contracts. Speculators are actively reducing their positions in the absence of ideas. In addition, high volatility prevents some participants from actively trading. We have to close in the footsteps and think about how to live on.

Growth scenario: April futures, the expiration date is March 22. You can try to go long after rising above 93.00. The chance of a move to 106.00 is not bad. Falling scenario: we don’t want to fall. Who entered the short after falling below 88.00, he stands, we do not open new positions down.

Growth scenario: March futures, the expiration date is March 10. There are chances for continued growth will buy.

Falling scenario: we continue to assume that it is possible to sell only after falling below the level of 790.0. 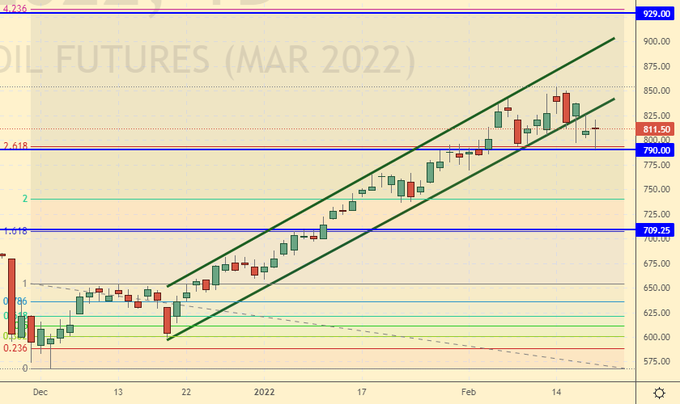 Growth scenario: April futures, the expiration date is March 29. We hold longs. The gas situation in Europe is tense.

Falling scenario: we will not sell. The risks of aggravation of relations in Europe and the world are too great. 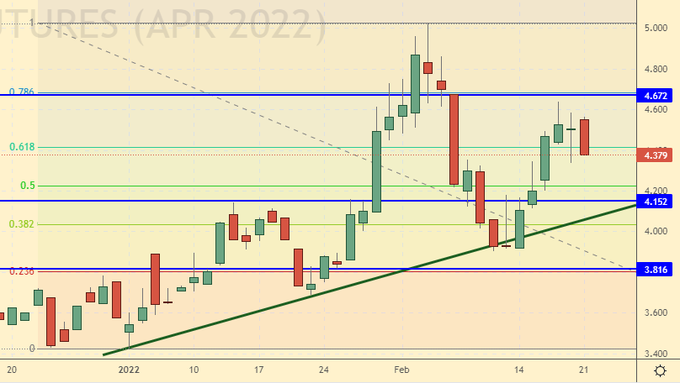 Growth scenario: the euro will be under pressure for now. The crisis in Ukraine is putting pressure on the Europeans, as under the guise of Washington twisting their arms, urging them to refuse energy supplies from Russia. And American supplies will be much more expensive than Russian ones. It’s clear as day.

Falling scenario: the dollar goes to 1.0600. Those interested can sell here. 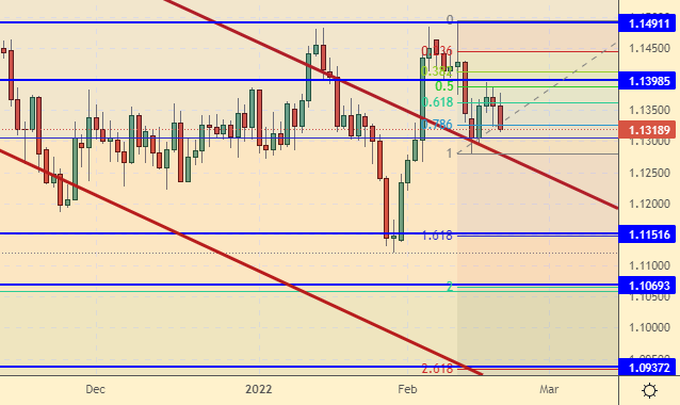 Growth scenario: the market is entirely dependent on foreign policy factors. There is no doubt that even if the conflict in eastern Ukraine fades, that is, everyone suddenly took it and went home, Russia will face revenge from the West for trying to pursue an independent policy, and no China will help here. The situation is bad, the pair is likely to grow. Please note that everyone has forgotten how much oil is now and what the RGBI index shows there. At the moment, these are secondary things.

Falling scenario: manufacturers of weapons and durable products are overjoyed at what is happening. The military lobby will push the parties with bayonets in the back to take action, and the time has come for the generals to hang new stars and orders on their chests on shoulder straps. Let’s hope for the sober thinking of politicians. We do not enter shorts in pairs. 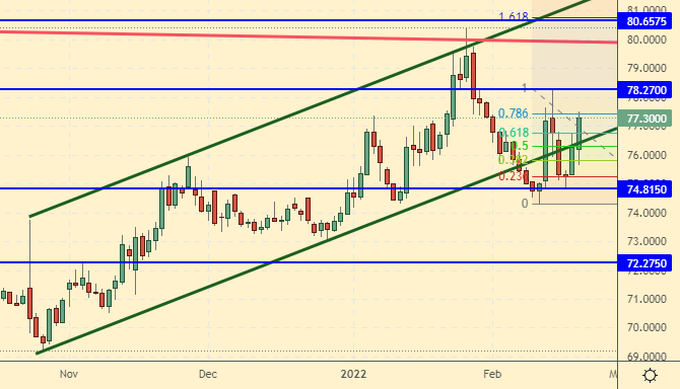 Growth scenario: Russian market will be severely compressed in the next few months if there are no gaps in communication with the West. While these gaps are not present, therefore we do not recommend buying.

Falling scenario: going down. We have so many interesting things down there: both the level of 108,000 and the level of 82,000, and if it gets really bad around us, then 50,000. But if, one day, half Russian, half American-British Sberbank, look at the structure of shareholders, former «Sberbank», finally, will earn in the Crimea, then a lot can change for the better. 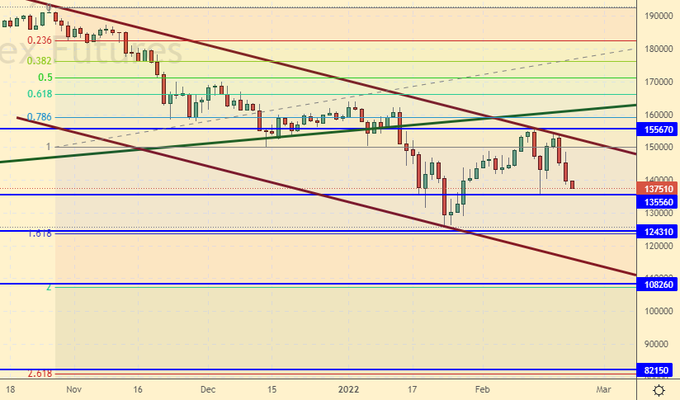