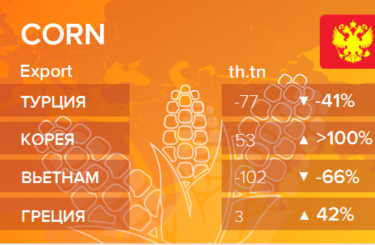 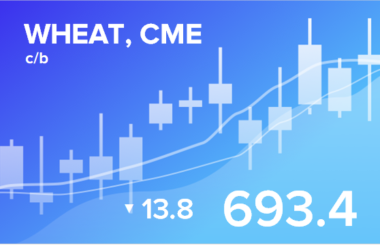 So we have waited for the USDA report with the first forecast for the season 2021/2022. The numbers came out better than market expectations. After the unfavorable months for winter months, both in March and in April, when they wrote about frost and drought both in the USA and in Europe, almost every day, to see a forecast of 1.66% growth in the gross harvest of wheat compared to last year is somewhat surprising.

The forecast for the gross harvest of corn with an increase of 5.44% is also impressive. It forced prices to retreat from the highs, due to the fact that fears about a possible shortage of feed in the world have become much less.

We cannot rule out that positive assessments of the current situation were dictated not only by the available real data, but also by considerations of curbing the growth of prices in dollars for food in the next few weeks.

Inflation in the food sector worries not only the United States, it hits the vast majority of people on Earth. The speculators needed to be curbed. And that is what they did by publishing an optimistic forecast.

The OPEC report was released on May 12th. We see that the forecasts for the growth of oil consumption for the month have not changed and amount to 96.46 million barrels per day. An increase of +5.95 million barrels compared to last year.

How do we feel about this?

On the one hand, we have economic growth in the US at 6.4% y/y in the first quarter, and good forecasts for GDP growth in the Eurozone to 4.2% per annum. On the other hand, we see a difficult pandemic situation in both Europe and India.

It should be borne in mind that if the situation gradually improves, thanks to vaccination programs, the tourism sector could take off next year. The growing consumption of aviation kerosene against the backdrop of the return of international flights can push the oil market to growth. Let’s not forget about deferred demand. If now many people are afraid to travel, then after the victory over the virus, people will go all out. Some to Paris, some to Thailand.

The current press background is clearly bullish. The topic of reducing exploration costs is being discussed, because of which there will not be enough oil for everyone in five years. Who and why this wave was raised is still a question.

We can say that summer has already arrived. Seasonal growth in demand for gasoline is already in price. At the moment, we do not see any short-term drivers for price growth. It will be extremely difficult for the bulls to push the market up next week.

The growth of the EU economy and stable oil prices in 2021 will help Russia recover from the pandemic in 2022. The fall in Russia’s GDP in 2020 is estimated by the European Commission at only 3%. For the ruble, the well-being of its neighbors is a clear boon.

The decisiveness with which Nabiullina raises the rate is reflected in the ruble exchange rate, which remains stable.

It cannot be ruled out that in the event of a slowdown in the growth of prices within the country, the demand for Russian debt securities will grow, since their net profitability will grow. The difference between the interest rate on securities and inflation will significantly exceed the yield on western debt securities and can range from 0.5 to 1 percent per annum.

Thus, the slowdown in inflation in the summer months will support the ruble against the backdrop of a relatively high Central Bank rate. 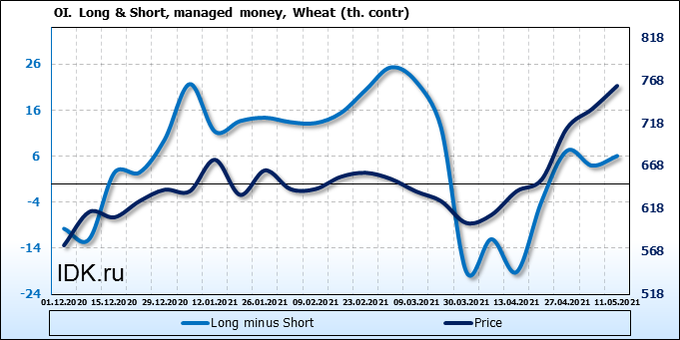 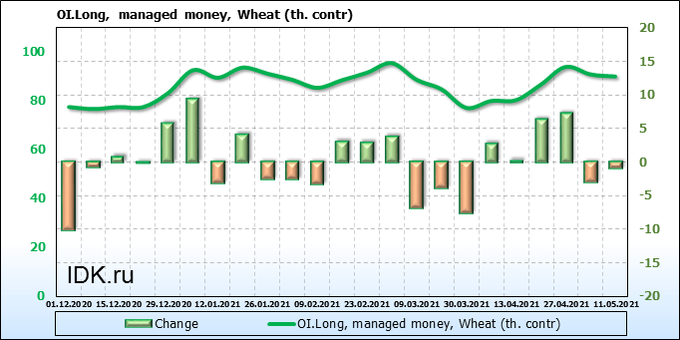 We do not have the latest data on the positions of participants on Wednesday, Thursday and Friday, but we can assume, looking at the market, that the bulls, seeing the positive forecast of the USDA, were running away at superluminal speed.

Growth scenario: July futures, expiration date July 14. We are disciplined waiting for the arrival of prices in the 650.0 area. We will buy there.

Falling scenario: «here we have to sell», we wrote a week earlier. And we’re right. You should have gone around 750.0 and added 770.0 to the shorts. Now we hold positions. When you roll back to 740.0, you can build up shorts. 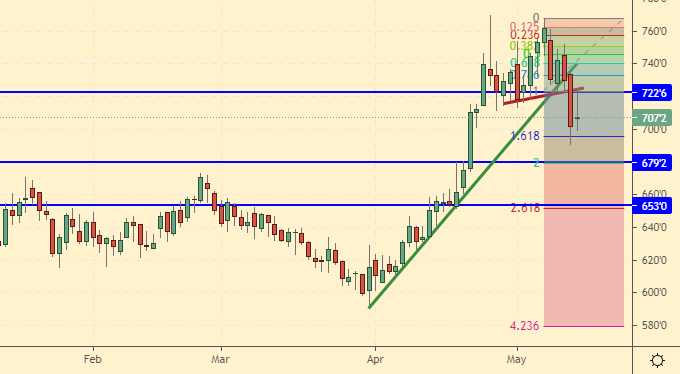 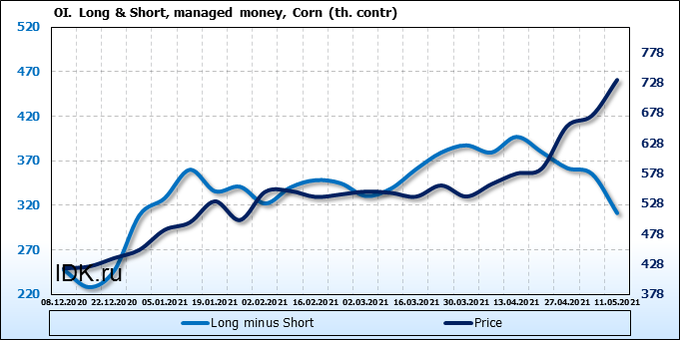 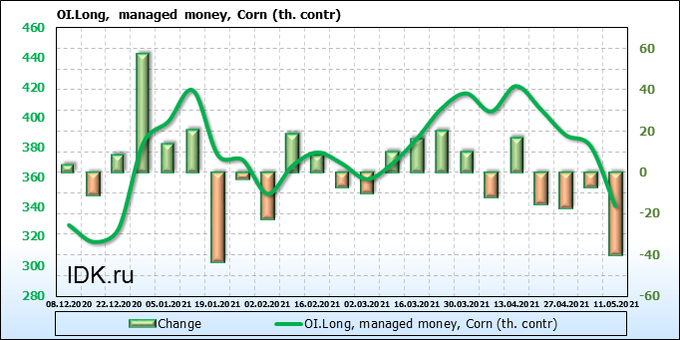 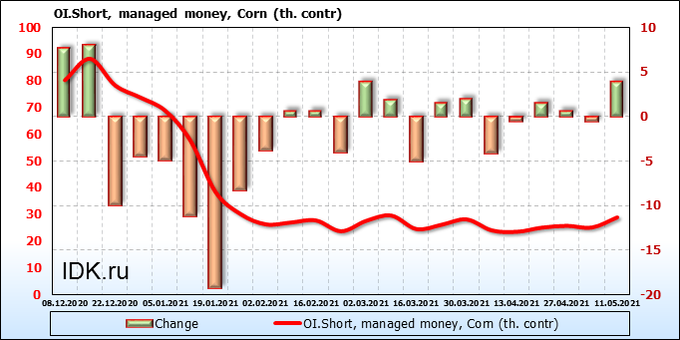 The market did not disappoint. As with wheat, we do not have the latest data for corn, but we can say for sure that the bulls were killed on Thursday, and on Friday the ash was scattered in the wind. Directly over the fields of Iowa and Illinois. Where most of this corn is harvested. Growth scenario: July futures, expiration date July 14. Our strategy of not buying the highs turned out to be correct. Now, when approaching 600.0, we will try to enter long.

Falling scenario: everything is fine. I would very much like to see the continuation of the market fall next week. The forecast of 5.44% growth in gross harvest in the 21/22 season made a strong impression on traders. In the future, a fall to 530.0 cannot be ruled out. But prices are unlikely to fall below. 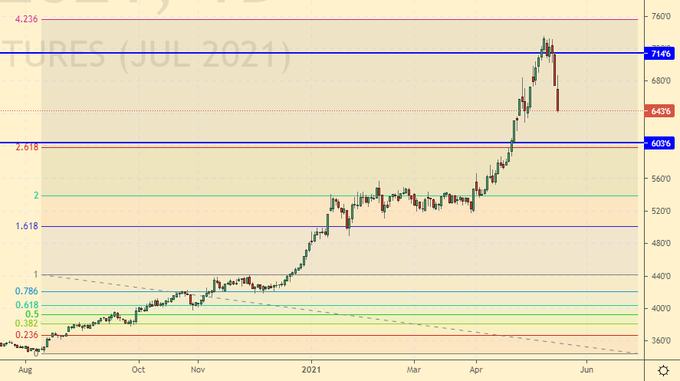 Growth scenario: consider the July futures, expiration date July 14. Let’s reconsider the goals. Let’s make them more humble. The forecast for the gross harvest of soybeans is increased by 6.22% for the season 21/22, which makes continued growth problematic. We push the stop order to the current levels.

Falling scenario: from 1600 it will be interesting to sell. Yes, the structure of consumption by the population has changed, people have switched from animal fats to vegetable fats. However, as the economy recovers, demand for oilseeds will decline. In the future, we can drop to 1260, then a return to the 1350 area will follow. Recommendation: 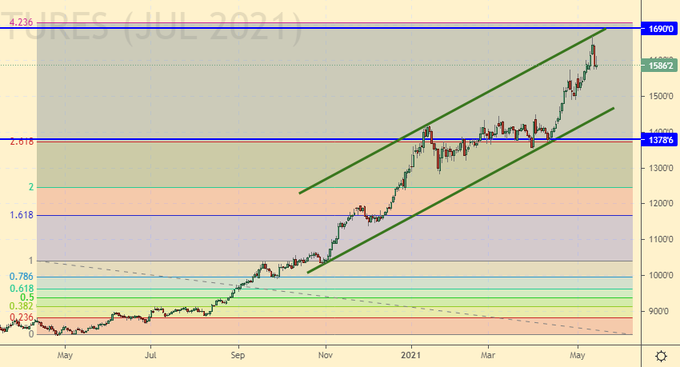 Growth scenario: July futures, expiration date June 30. A rollback to 13.50 will be considered a working version. In the event of a fall in prices, you can buy in the area.

Falling scenario: last Monday’s sales turned out to be correct. We will be in shorts. When returning to 18.00, positions can be increased. 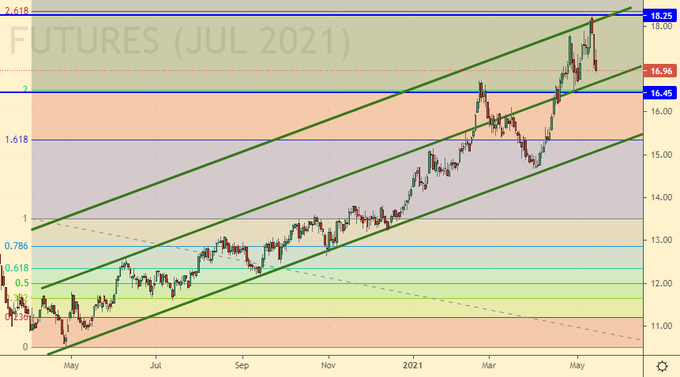 Growth scenario: July futures, expiration date July 20. Most likely we will fall to 136.00. In that area, it will be possible to think about resuming shopping.

Falling scenario: an aggressive support line under the threat of a breakout. If we go down 143.00, we will fall to 136.0. This will be the working scenario. 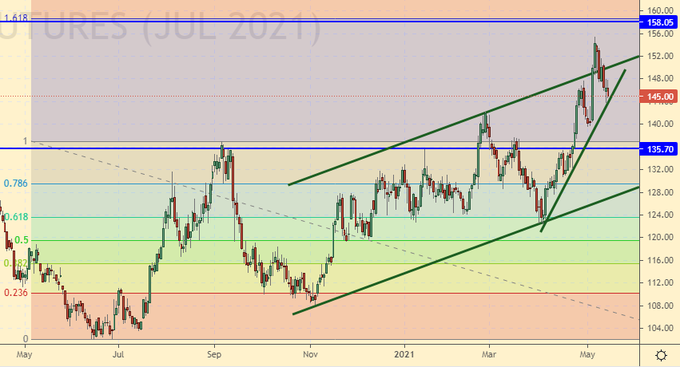 Buyers lose their optimism and leave. Sellers, on the other hand, are increasing their presence. If this behavior continues for another week, the market will turn down.

Growth scenario: May futures, expiration date May 28. To enter a long, the current levels are of no interest. We must be patient. We are waiting for a rollback.

Falling scenario: bulls brought the market back from 66.50 to 68.80 on Friday. This is unexpected, it is unpleasant, but it is worth fighting here. Sell in case of another fall below 67.00. 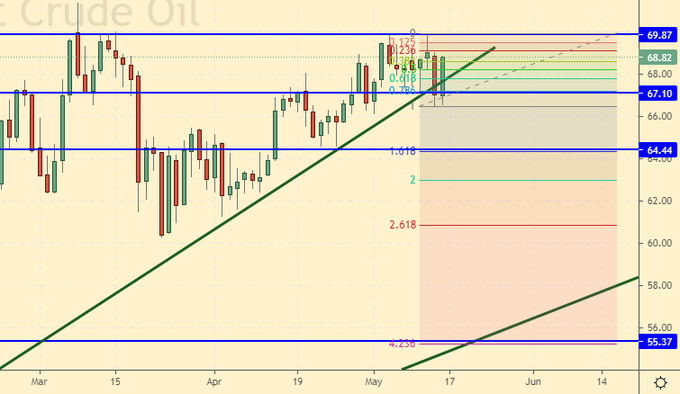 Fundamental US data: the number of active drilling rigs increased by 8 to 352. 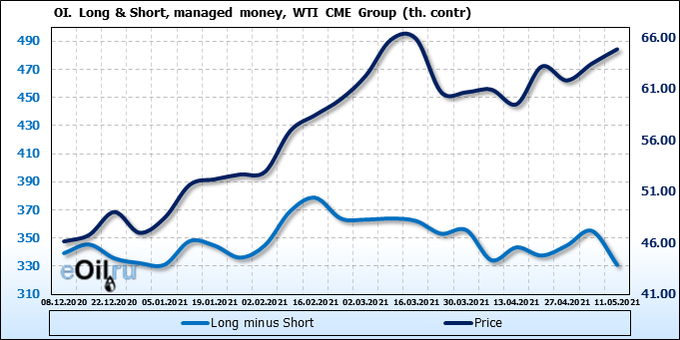 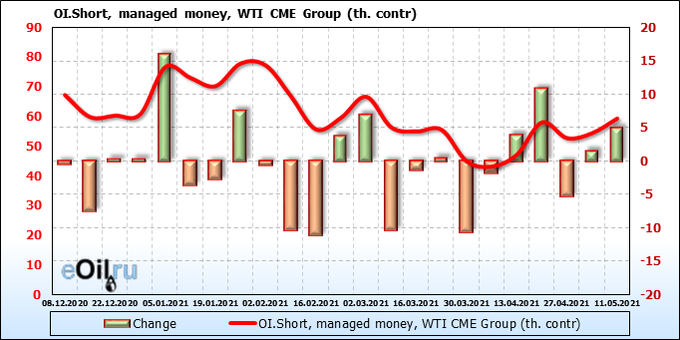 Buyers don’t want to go on the attack. This is understandable: the levels for purchases are high. From a psychological point of view, bulls need to draw a new maximum for the future, but how they are going to do this if their ranks are melting is a big question.

Growth scenario: July futures, expiration date June 22. Buyers have a target at 70.50. If it is reached, the market is unlikely to fall below 55.00 this summer. In the current situation, we recommend buying only on 1H.

Falling scenario: we continue to consider that short from the current levels is appropriate. If it falls below 63.40, we will sell. Sooner or later, long-term support will fail. As soon as it is broken, the market will go down. 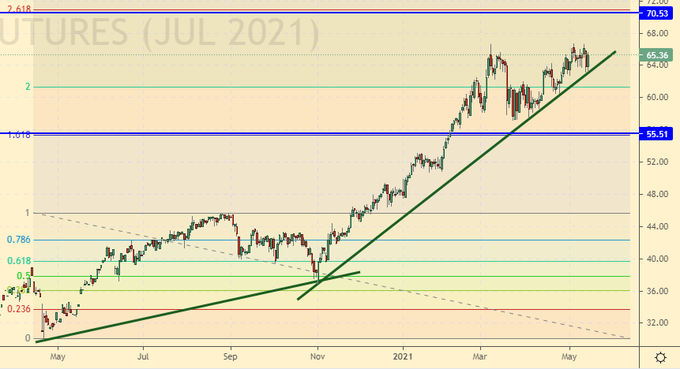 Falling scenario: have not yet been able to break the price channel down. Nothing wrong. If the market drops below 540.0 again, we will sell again. We have no right to skip rollback. 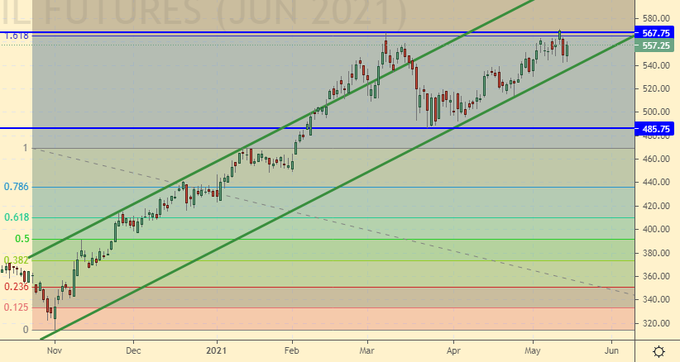 Growth scenario: June futures, expiration date May 26. Prices have stabilized. Most likely, a rollback to 2.800 awaits us, after which the growth will continue. The flight up from the current levels will be a pleasant surprise.

Falling scenario: patiently awaiting the arrival of prices to 3.500. We will think about sales there. Recommendation: 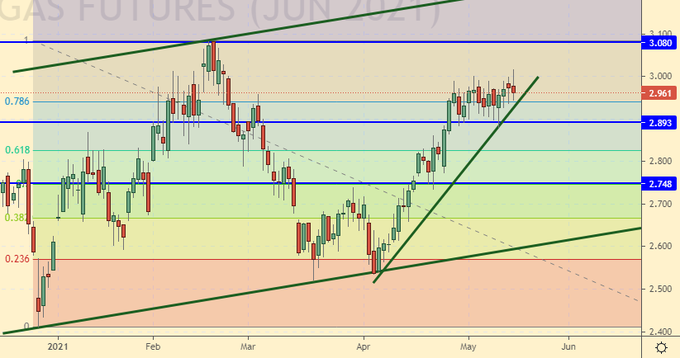 Growth scenario: we continue to hold longs. It makes no sense for us now to abandon the scenario with a visit to 1885. Moreover, we cannot rule out growth to 2000, provided that in June, Fed Chairman Powell is not inclined to notice inflation in the United States.

Falling scenario: do not sell. Prices look great in a growing price channel. Let it be. Whether the dollar will be strong is still a question. 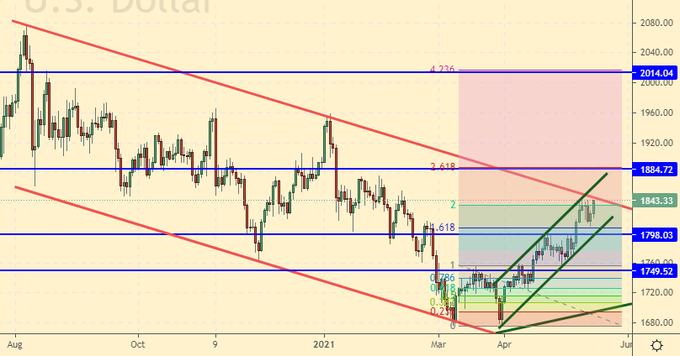 Growth scenario: despite the fact that the US labor market is recovering, traders still have doubts about the prospects for a rate hike in the US. Europe does not want to give up, they forecast GDP growth of 4%. If so, then we will continue to hold longs.

Falling scenario: we will refrain from selling for now. Prices are in a growing price channel. Let’s not bother them. 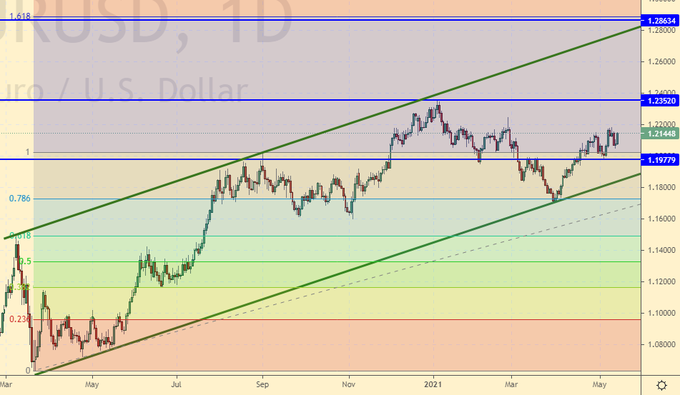 Growth scenario: in the current situation, the dollar cannot harm the ruble in any way. Foreign trade of the Russian Federation is leaving the dollar zone at an accelerated pace. Already more than 50% of all foreign trade transactions are carried out in anything, but not in the American currency. The ruble itself is not going to harm itself either. Against the background of the forecast for Russia’s GDP growth in 2021 by 2.7%, I would like to see a pair at 71.00. And there is already to buy.

Falling scenario: The short idea hasn’t run out of steam. You can sell here. It is possible that the dollar index will be under pressure during the summer, as the Americans expect a full recovery of the labor market, and until it happens, they will not notice inflation. 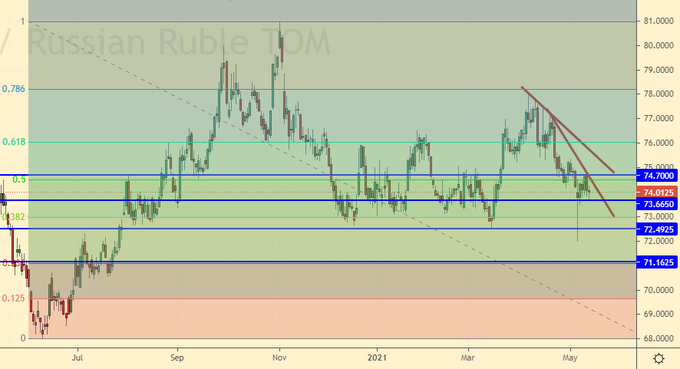 Growth scenario: the season for declaring dividend payments for the last year is coming to an end. There are no more internal drivers for the growth of the index. It is highly likely that in the fight against inflation, Nabiullina will win through a rate hike. And if this is so, then part of the money will not go to the stock market and will settle on deposits. Touching the 160,000 level is possible. Stronger growth is unlikely to be seen in summer.

Falling scenario: the market is in no hurry to fall. This means that we remain on the sidelines for the time being. We will sell if the index futures fall below 150,000. 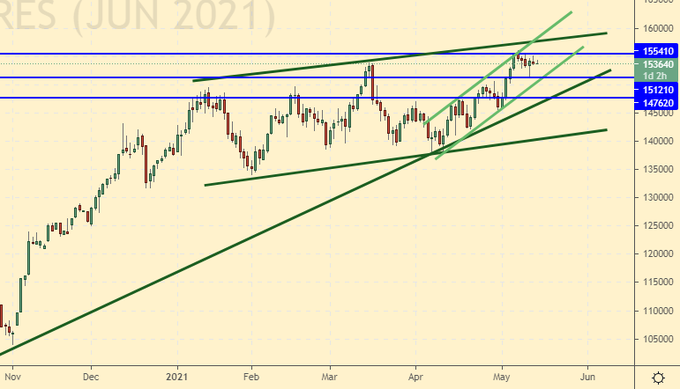