Электронный журнал IDK.Эксперт
Price forecast from 8 to 12 of August 2022

France has run out of water. No, not in the taps, but in general the whole. The rivers have dried up. Watering plants is considered a crime. The south of Europe has never seen such a drought. Farmers are already talking about losses of up to 20% of the corn crop and 10% of losses for wheat, with a deterioration in grain quality.

The export potential of France will clearly decrease due to the drought. There will be less food wheat.

The Russian Ministry of Agriculture predicts grain harvest at the level of 130 million tons, including wheat in the amount of 87 million tons. 27% of the area has already been harvested and 55 million tons of grain have been harvested. However, due to weather conditions, there is a threat of a decrease in the gross harvest, which may lead to a revision of plans for grain exports. It may not reach the planned 50 million tons. We expected some catch from the USDA report in July, but the US Department of Agriculture did not express any concern. It is possible that next week on Friday, the 12th, we will still see some downward revaluation of the gross grain harvest. If the numbers are very bad, then we can hold on to the current price levels for wheat and corn and go up, and this will be a blow to the bears.

Greece and Turkey are waiting for rich German pensioners for the winter. According to rumors, in all sorts of Hamburgs and Bonns with Hanover, those still remain.

If you pay 500 euros for heating a small apartment, then no pension and no savings will be enough. It’s easier to turn everything off, close the house, and go to the south to have fun, and in the house let mold grow quietly on the walls. The amount of 500 euros for gas for one household seems to be far from the limit at the moment. Prices may go higher.

Comrade Schroeder arrived in Moscow on vacation and saw the obvious: “Turn on,” he says, “Nord Stream 2.” And, Herr Scholz answers him that no, they say, we will not include anything. Let’s destroy our nation. Suspicions arise that Scholz was given a machine for printing American money as a gift from Washington and placed in the basement of the house. Whatever editions you want, print those, and draw as many zeros on our money as you want. Just don’t turn on the Nord Streams from Russia. Oh how!

And our people realized that he was somehow not like Chancellor Scholz, and now they themselves do not take their turbine for our first stream. You yourself imposed sanctions against us. Well, then follow your own orders. You can go crazy.

OPEC will increase oil production in September by only 100 thousand barrels per day. Someone considers this step almost a challenge to the United States. A challenge, not a challenge, but there is already a surplus on the market and it is stupid to pump more than what the world economy needs. And her needs obviously will not grow. It is very likely that Europe, following the US, will smoothly enter into recession. In fact, if in the third quarter, as in the first two, the US economy shows a slowdown, we are in for a strong drop in energy prices.

On Monday, we will not see the invasion of foreign investors on the Russian stock market, due to the fact that the Moscow Exchange will be adjusting the software for some time. The date of admission of foreigners to the auction is not clear. Betting on the fall of the ruble and the fall of stock indices in this new situation turned out to be clearly in the risk zone.

The basic scenario in the minds of traders was simple: foreigners would come, albeit from friendly countries, they would sell Russian shares and receive rubles on their accounts, then they would sell rubles and buy dollars. This was supposed to lead to a fall in the stock market and a simultaneous fall in the ruble. Now this scenario is postponed indefinitely.

However, maybe this is good, and we do not need any foreigners here.

Over the past week, the difference between long and short positions of managers increased by 4.4 thousand contracts. Both sellers and buyers actively enter the market. There will be a big money battle, most likely on Friday night after the release of the USDA report.

Growth scenario: consider the September futures, the expiration date is September 14th. Let’s not think about buying until the market is below the level of 850.0 cents per bushel. Currently out of the market.

Fall scenario: falling, but not fast. Keep shorts. Designated the level of 750.0 cents per bushel as support. If it is broken, then it can be added to sales. 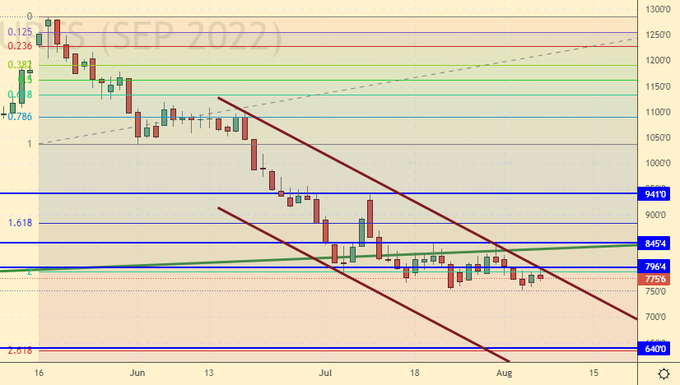 Last week the difference between long and short positions of managers increased by 6.3 thousand contracts. Both sellers and buyers entered the market, but more of the latter came.

Growth scenario: consider the September futures, the expiration date is September 14th. If the market rises above 625 cents per bushel, we will buy. Currently out of the market.

Fall scenario: drought situation in Europe becomes unpleasant for sellers. Prices may start to rise. We do not open new positions, for previously opened positions we move the stop closer to current prices. 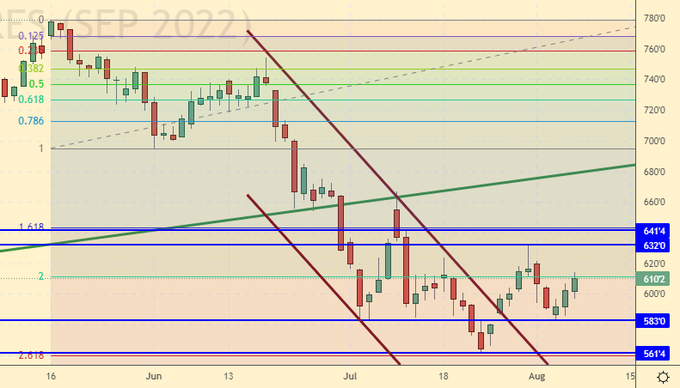 Growth scenario: consider the September futures, the expiration date is September 14th. We continue not to believe in growth. Drought should not greatly affect soybeans.

Fall scenario: as we wrote a week earlier, it makes sense to sell from current levels and approaching 1535. Who’s in position, keep your shorts. Recommendations for the soybean market: Purchase: no. 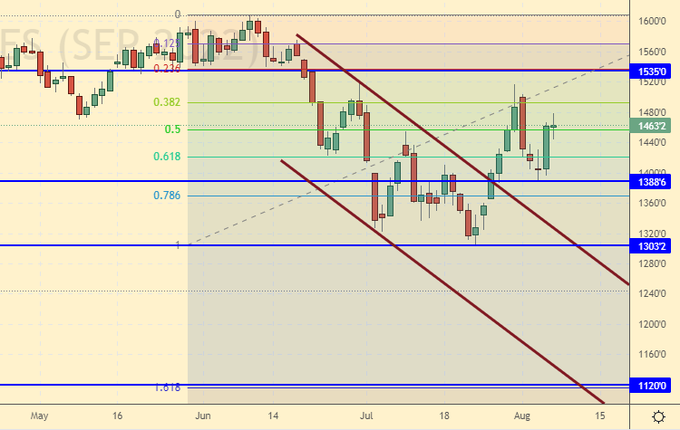 Growth scenario: consider the October futures, the expiration date is September 30th. Until the market fell low enough. We don’t buy. We are preparing money for purchases from 16.40 and 15.20 cents per pound.

Fall scenario: continue to hold shorts. We believe that the market may leave at 15.20. Recommendations for the sugar market: 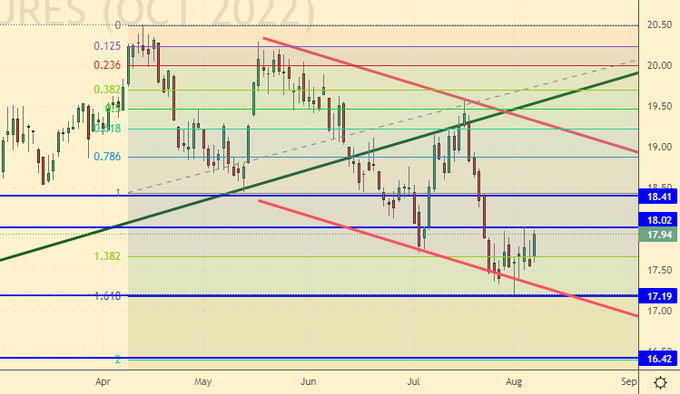 Growth scenario: we are considering the September futures, the expiration date is September 20. We continue to refuse purchases. Bulls can’t draw anything interesting.

Fall scenario: despite the fact that the stop was hit at 220.0, we will enter the market again. Possible continuation of the fall. 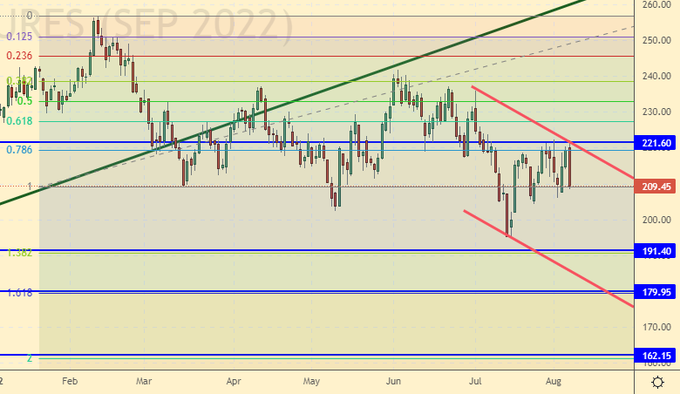 Over the past week, the difference between long and short positions of managers has decreased by 5.5 thousand contracts. There are more sellers on the market than buyers. It is possible that sellers will seize the initiative in the market.

Growth scenario: consider the August futures, the expiration date is August 31. The bulls are retreating. A new low is shown. While out of the market.

Fall scenario: everything is going well for sellers. Prices for the week fell by 10%. There is a move to $80 per barrel. 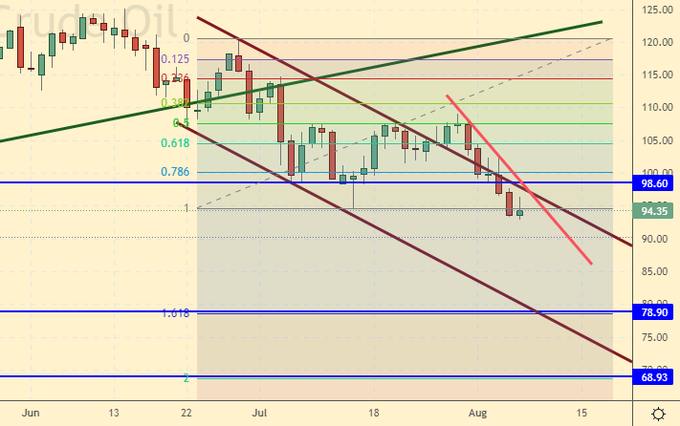 US fundamental data: the number of active drilling rigs decreased by 7 units and now stands at 598 units.

Last week the difference between long and short positions of managers decreased by 21.6 thousand contracts. The bulls are leaving the market. Sellers are slowly building up pressure.

Growth scenario: consider the September futures, the expiration date is August 22. Buyers have nothing to offer. Their activity is reduced, sellers take the situation into their own hands. We don’t buy.

Fall scenario: we are falling. The target of $82.00 per barrel is tangible. The 70.00 mark is visible through binoculars. We continue to keep the shorts. 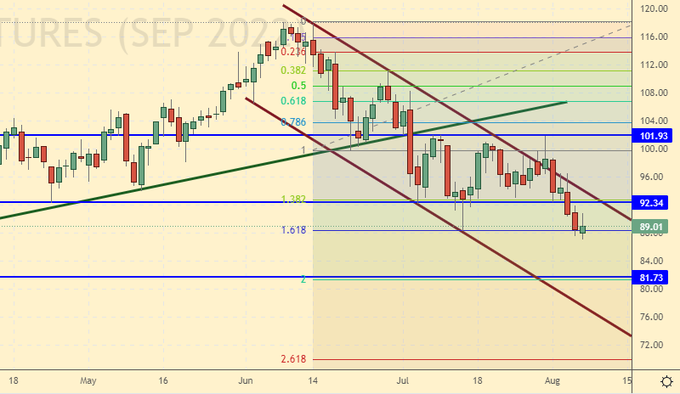 Growth scenario: we are considering the September futures, the expiration date is September 12. We do not buy, the market has drawn a falling channel and is having fun in it. Fall scenario: It is worth keeping the shorts open earlier. We are falling. 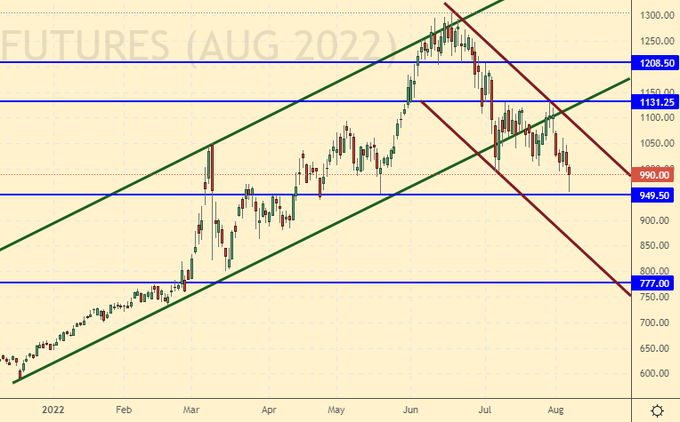 Growth scenario: we are considering the September futures, the expiration date is August 29. We continue to hold longs. Europe may never see Nord Stream gas again. It will be bad for everyone.

Fall scenario: we continue to refuse to enter the short. Due to what we can now go south is not clear. 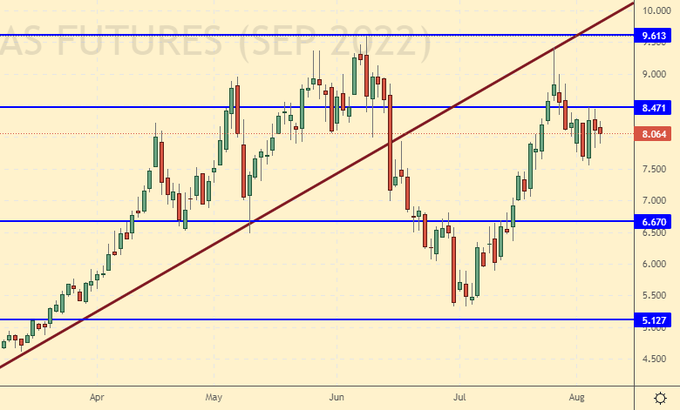 Growth scenario: hit 1795 and move down. Continued growth is not ruled out. Level 1765 became support.

Fall scenario: for now, it is worth holding the previously open shorts, but the stop order should be moved closer to the place of events. Those who wish can enter the short. 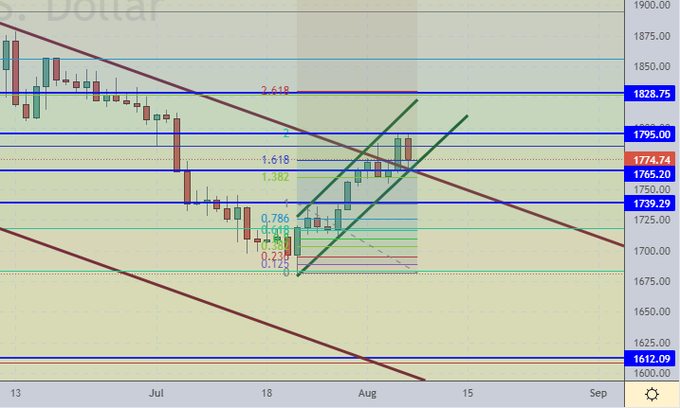 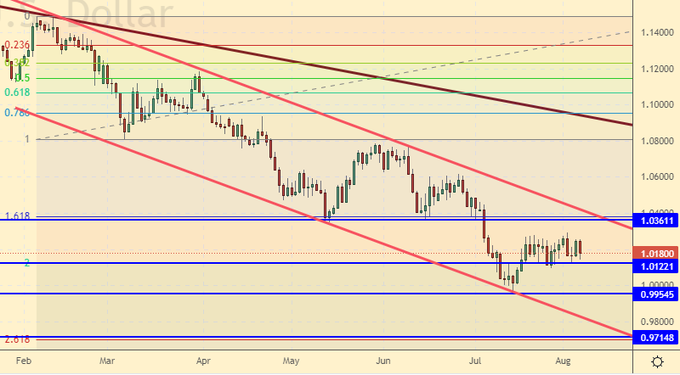 Growth scenario: the ruble stood all week. People thought that on Monday, the 8th, foreigners would come to the market and dance with the stars, and now, after the cancellation of access for investors, it is not necessary to count on the growth of the pair. On Monday, people will come out of the shorts. The ruble may strengthen. We must take advantage of this. When approaching 56.50, buy the dollar against the ruble.

Fall scenario: the pair may go down next week, but you should not count on a strong fall, for example, to the level of 50 rubles per dollar. At least for the current day and hour, this is hard to imagine. However, those who wish can sell at current levels. Suddenly, in fact, we are waiting for the level of 46.00. 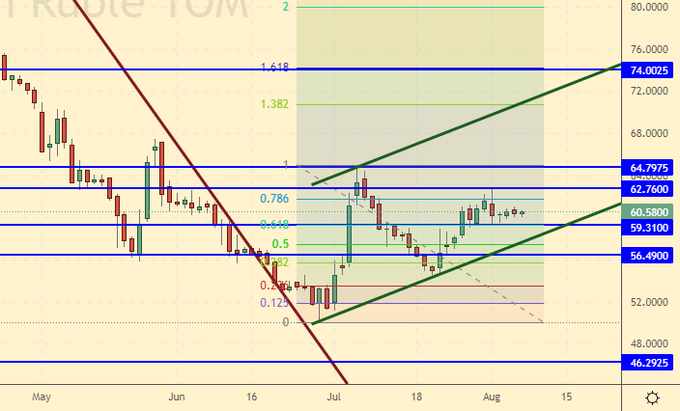 Growth scenario: since there will be no influx of foreigners with clearly bearish intentions tomorrow, the Russian stock market may show growth. However, it will be limited. It is not yet clear how the bulls can turn the tide.

Fall scenario: Let’s not guess what will happen tomorrow just because our shorts are already open. We will continue to hold short positions. The move to 96000 and 88000 points is visible. Those who wish can move stop orders closer to the current price, and we will leave everything as it is. 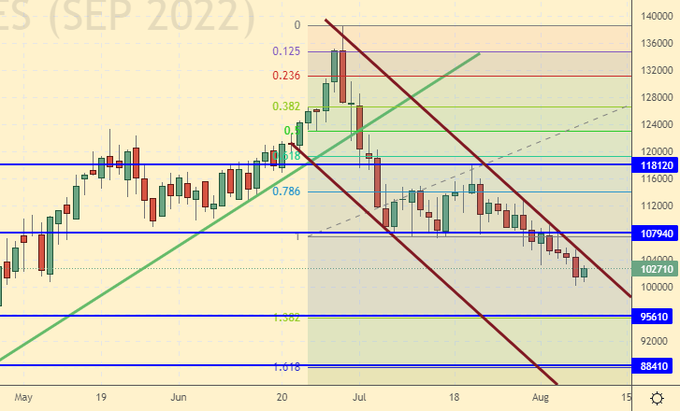