A severe drought, continuing in the western United States, was complemented by a plague of locusts. A 2021 study shows high insect pest densities in large areas of Montana, Wyoming, and Oregon, as well as parts of Idaho, Arizona, Colorado, and Nebraska. Federal officials said agricultural damage from locusts could become so severe that it would drive up the prices of beef and other crops. The peak of the outbreak this year is expected in about two months, when the insects reach 5-7 cm in length and become so numerous that they begin to devour more plants than all livestock.

In Russia, a noticeable deficit of precipitation is observed in the Sverdlovsk, Chelyabinsk and Kurgan regions. Sverdlovsk farmers believe that due to bad weather the grain shortfall will be at least 30%.

In the Orenburg region, atmospheric drought is noted in 27 out of 30 municipalities, soil — in three, dry winds — in 22. Hot weather adversely affects the state of crops of both spring and winter crops.

In the Samara region, the air will heat up to 37 degrees by the end of June.

Under the current circumstances, the exchange prices for grain, especially wheat, may receive support. Thus, we may not see a seasonal fall in prices in August.

The market is looking forward to the OPEC meeting on July 1st next week. The containment of production has paid off. Prices have increased.

The feasibility of further stimulating the growth of quotations is questionable for many traders, as expensive oil will resurrect full-scale shale production and open the way for high-cost projects, which will lead to the loss of the current market share by OPEC countries.

Most likely, we will see the desire of the participants in the OPEC + deal to increase production and thereby restrain further price increases next week.

The Iranian delegation at the Vienna talks on the nuclear deal said that its position in the negotiations has not changed since the new president, Ibrahim Raisi, came to power in Tehran.

Due to the difficult economic situation inside the country, Iran is interested in the opportunity to sell as much oil as possible, so it will behave extremely cautiously in negotiations with the Americans.

In addition, the problem of Afghanistan has emerged in recent weeks. The Taliban are seizing area after area against the background of the withdrawal of the American military contingent from this country, which could lead to a military confrontation on the border of Iran and Afghanistan. In addition, a war, albeit a defensive one, costs money. It is possible that in case of failure in the negotiations on the nuclear deal, Iran will offer more oil to China. The latter will gladly receive additional volumes, ignoring warnings and threats from the United States.

Thus, against the backdrop of the upcoming meeting of the OPEC + countries on July 1, traders will start betting on falling prices right on Monday, without waiting for the results of negotiations on a nuclear deal between the United States and Iran. In addition, the data on open interest tells us about the approaching fall of the market, where we see a fall in the number of long positions in both Brent and WTI.

Reading our forecasts, you could have made money on the gas market by taking a move up from 2.52 to 3.54. Market growth in three months was 40%.

The Russian currency has approached its best levels over the past year. Most likely, in the next couple of months we will not see the ruble strengthening against the US dollar below the level of 71.00. The constantly rising oil price supports the ruble, but it turns out to be unable to accelerate the falling trend for the pair. In case of a fall in oil prices, we will see the national currency at 75.00.

Note that the dollar does not look strong at the moment, as the Fed only gave hope for a rate hike in the future. Promises to monitor inflation are already in prices. but talk is clearly not enough to strengthen the dollar.

There are buyers at the current levels. Most likely, the market will stop its decline and will not be able to go below 600.0, since it is not clear who will push the market down. There are no sellers on the market. Growth scenario: September futures, expiration date September 14. Most likely buyers will meet the market from 600.0. Sellers will not have enough strength to go lower, as the fundamental background is now in favor of the bulls due to the threat of drought. 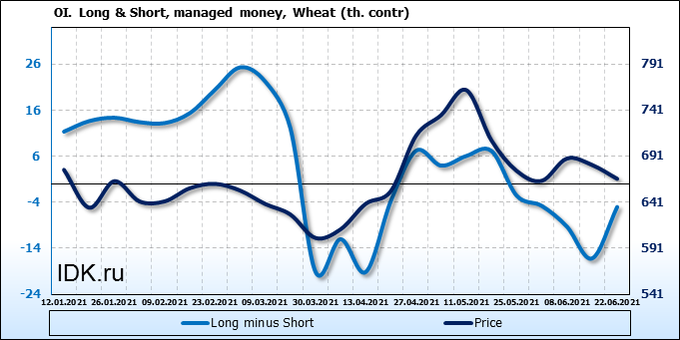 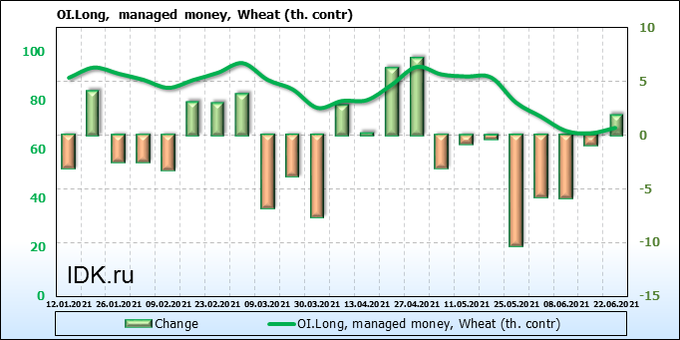 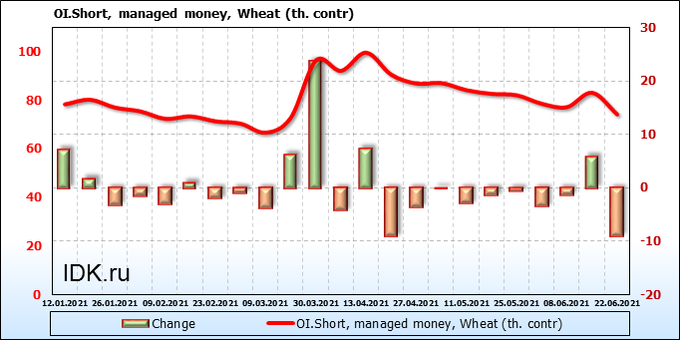 Falling scenario: «when approaching 680.0, you can catch on to the short,» we wrote a week earlier. The maximum was at 676.4. If you are logged in, then good. We will not obviously conduct this trade, since the recommended level for entering the short was at 679.0. 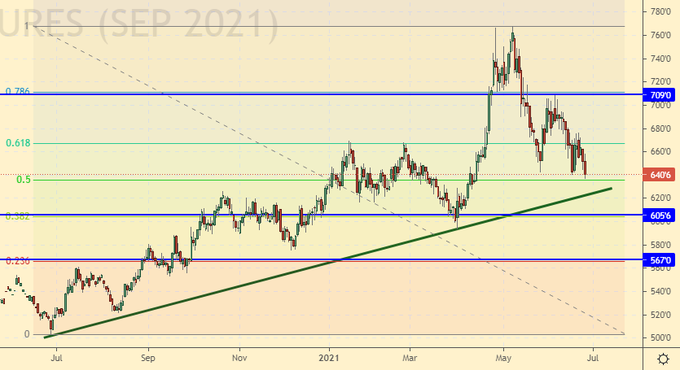 Speculators leave the market, both sellers and buyers. Most likely, the market will stop its decline around the level of 470.0 cents per bushel and will not be able to go lower due to the high temperatures established in the west and south of the United States. 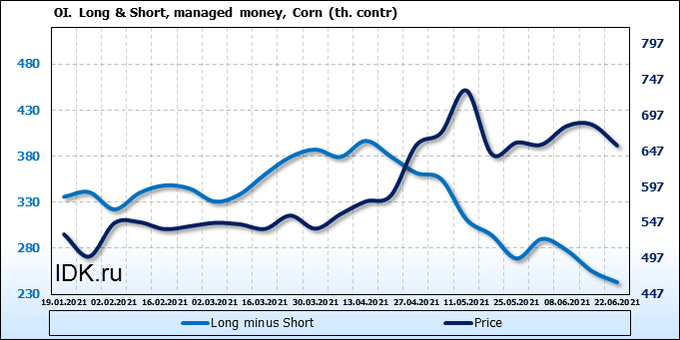 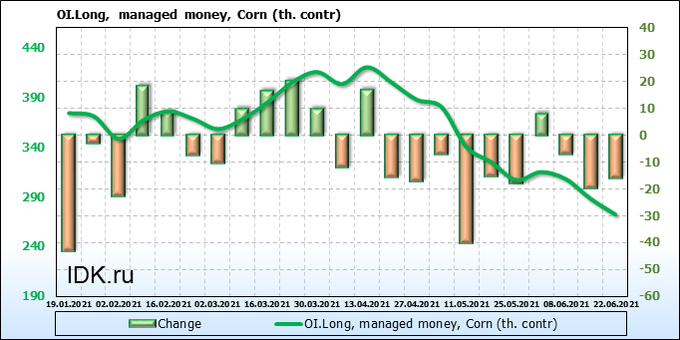 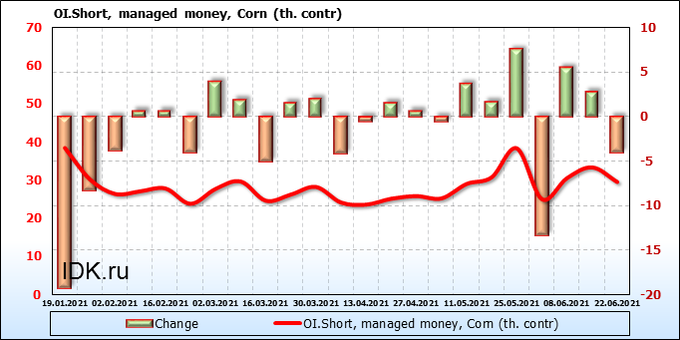 Growth scenario: September futures, expiration date September 14. We will wait for a fall to 470.0. Purchases from this level look optimal.

Falling scenario: we expect a fall to 470.0. Lower levels are not worth looking at. We are shifting from July contracts to September ones. 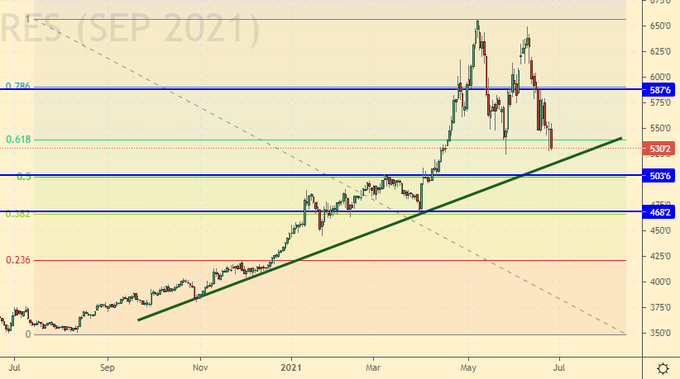 Growth scenario: September futures, expiration date September 14. A pullback to 1100.0 would be the best option for entering a long. For now, we will be patient and will not go into the purchase.

Falling scenario: a short can be opened here. A more interesting option would be sales from 1355, but the market may not provide such an opportunity. Therefore, we enter now.

Growth scenario: October futures, the expiration date is September 30. Here you need to go long, because you don’t want to miss the move to 19.50. In case of failure, we will make a second attempt to buy from the 15.00 area.

Falling scenario: we will switch to the October contract and keep the previously opened shorts with targets at 14.50. 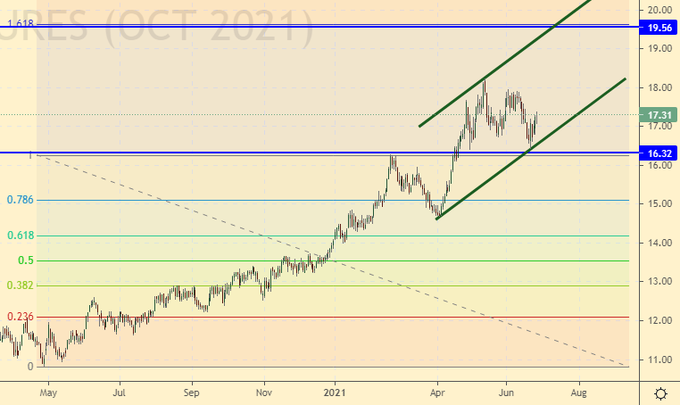 Growth scenario: July futures, the expiration date is July 20. It’s a pity, but the hike to 135.00 is postponed. You will have to buy from the current levels.

Falling scenario: what if the correction is not over and we still go to 140.00? We will sell. We put a stop next to it.

The bulls have removed the pressure, and prices continue to go up by inertia. The market cannot grow further without new money. The situation is getting thinner. The likelihood of falling prices is growing. Growth scenario: July futures, expiration date July 30. It is unpleasant to miss long stretches of growth. But we are not chasing the market. We are waiting for a rollback. We expect a fall to 70.50.

Falling scenario: «sales from 76.20 will definitely be with us,” we wrote last week. And here we are in a given area. We sell. 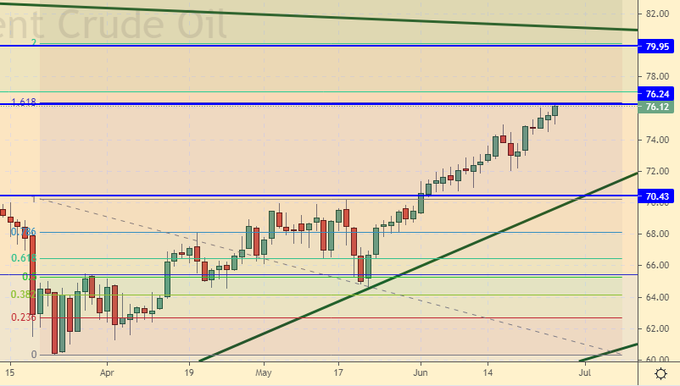 Fundamental US data: the number of active drilling rigs decreased by 1 unit to 372 units. 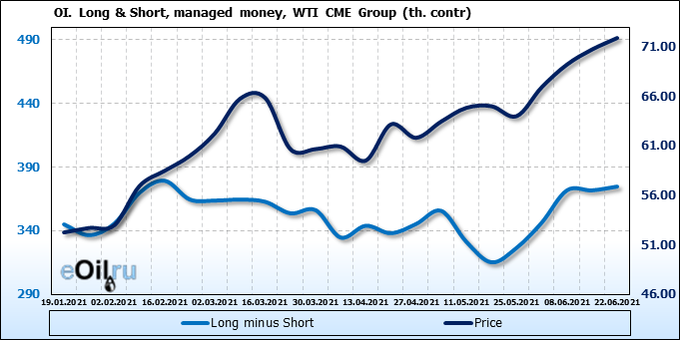 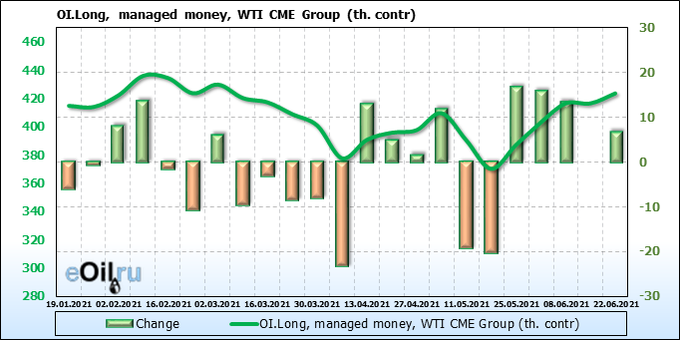 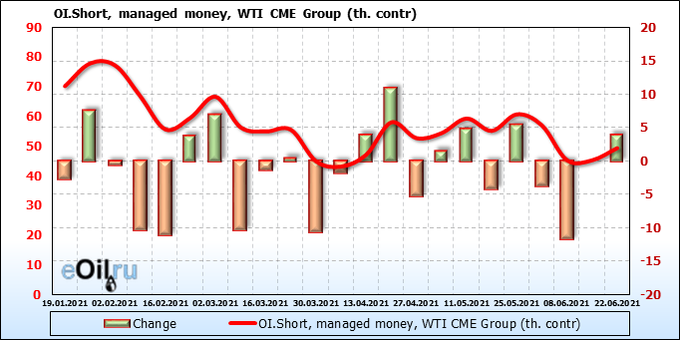 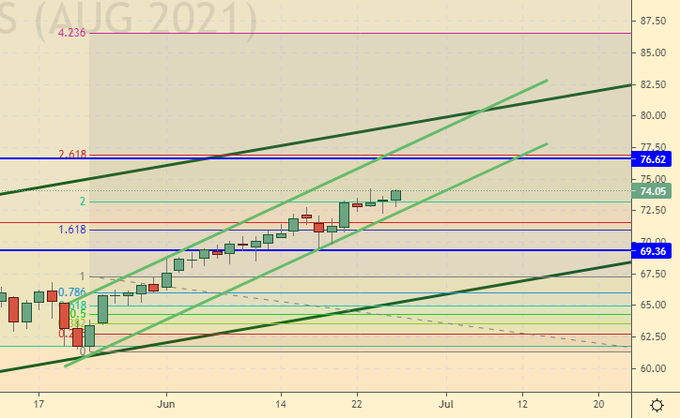 Growth scenario: July futures, expiration date is July 12th. Structurally, the upward impulse is complete, which tells us that a pullback can be at any time. We will protect the profit of our longs and move the stop order close.

Falling scenario: if you want to sell, you have to do it. The reward/risk ratio is very attractive. Recommendation: 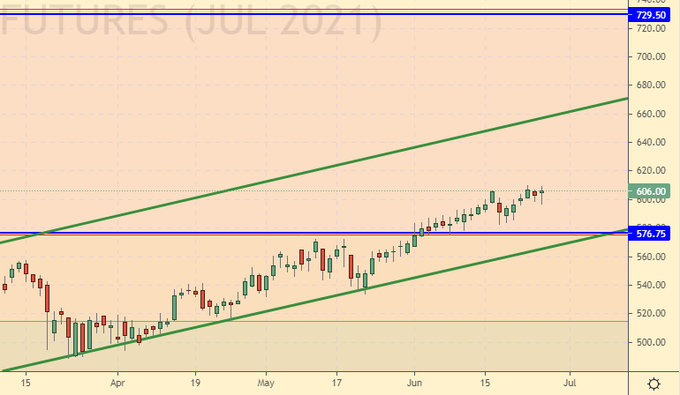 Growth scenario: August futures, expiration date July 28. Should we take profit? That is the question. Since we have reached our previously set goal, we will take away everything that has grown over these months. You must follow the trading plan.

Falling scenario: sell here. The chances are few, but if there is a pullback to 3.150, the risk will be justified. Recommendation: 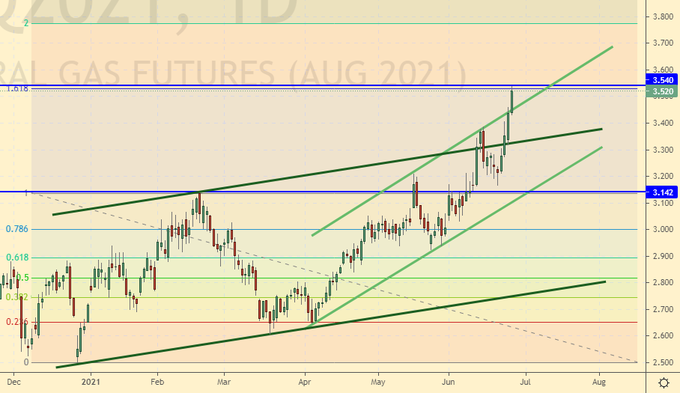 Growth scenario: there are concerns that the dollar is not as strong as its fans would like it to be. The current area is of interest for shopping. From 1735 can be added.

Falling scenario: the market is able to recover by 1850. If this happens, we will sell there. 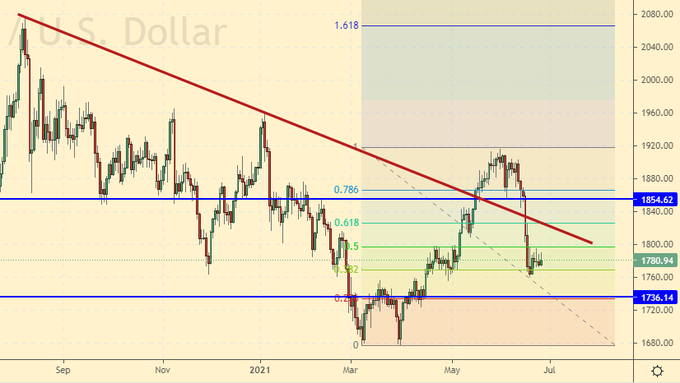 Growth scenario: we seem to have exited the growing channel, but there is no intensive downward fall. This means that doubts about the strength of the dollar remain. We will wait for growth above 1.2100 and then we will buy. 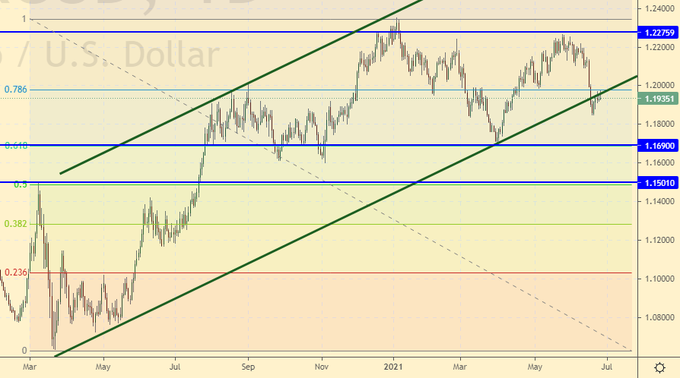 Growth scenario: we either have already shown a minimum for the pair at 71.55, or we will do it very soon, reaching 71.15. Either way, shopping in the current area is worthwhile. If we do get to the 71.00 level, then we can buy aggressively there.

Falling scenario: closed us at the stop at 73.20. Not the best trend. We earned one ruble. We don’t sell anymore. The maturing downward move in the commodity market should negatively affect the ruble exchange rate. 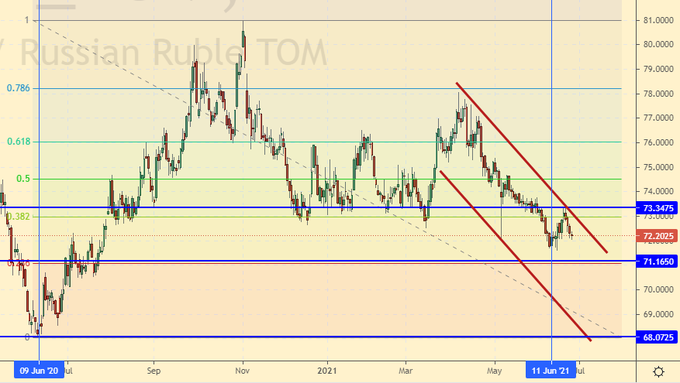 Growth scenario: technically, there are prerequisites for the continuation of the fall. We will wait for a rollback to 155,000 amid an increase in taxes on metallurgists. There it will be possible to think about shopping, provided that the external background remains calm.

Falling scenario: «Most likely the market will go below 160,000. Let’s bet on this event. Let’s go short,» we wrote a week earlier. So far, nothing prevents us from adhering to this plan. We will sell. 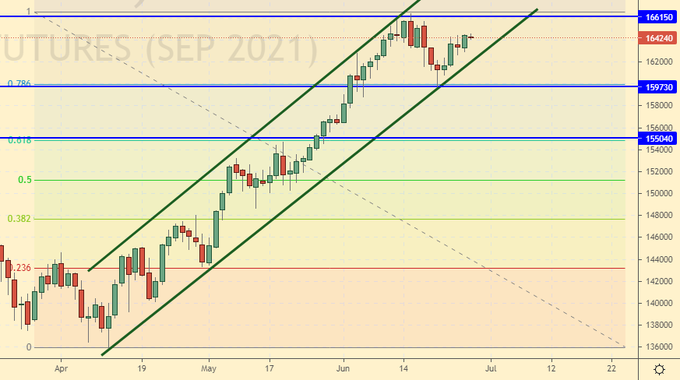