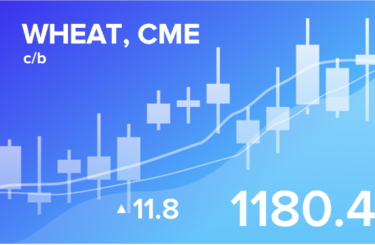 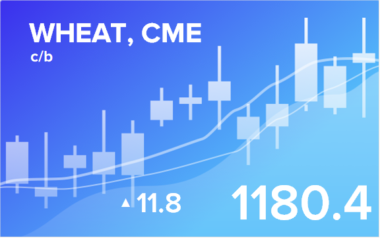 The International Grains Council has released its wheat harvest forecast for the 22/23 season. The data differs from the USDA forecast by 6 million tons down and is at around 769 million tons. IGC’s view is slightly more pessimistic than that of the US Department of Agriculture, but still the indicator is at a comfortable level.

Ukrainian grain began to arrive to buyers through European countries. This is a short-term stabilizing factor. Further, all attention will be focused on the volume of the new crop. Information about the state of crops this summer will be in the spotlight. Global coarse grain production in 2022/23 is projected to decline by 22.5 Mt (1.5%) year-on-year to 1,475.9 Mt. Most of the change is due to a decrease in estimated planting area in the US and a sharp decline in coarse grain planting area in Ukraine, expected to be 31%. In the event of weather problems and reduced yields, a sharp reaction from the markets can be expected.

For wheat, the level of 1400 cents per bushel remains in sight. For corn, we are able to go to the level of 870 cents per bushel. These upward moves can take place in June or later. Much will depend on the discrepancy between the current, generally positive market expectations for gross output, and the actual picture. The market is not visible above the above mentioned marks, since further demand will simply fall due to banal famine in a number of countries, as people will not be able to afford bread at a price that has tripled compared to last year.

The Hindus, finally, must decide whether they will sell wheat for export or not. The market is in a fever. In the city of Delhi, hear us. Practice asanas, meditate. Give a thoughtful answer. Stop scaring.

Ursula von der Leyne proposed covering office buildings and then all residential buildings in Europe with solar panels in order to avoid paying more for natural gas from Russia. But this is not true, it is necessary to cover it with mats and cotton robes, then the intensity of heat exchange with the external environment will decrease. And on the other hand, what to tell them, let them cover themselves with whatever they want.

Design bureaus in the US have begun designing homes with built-in an oil rig. Joke. Just a joke.

Drilling activity in America is on the rise. We can expect that we will see an attempt to reach the level of 13.5 million barrels of oil per day by the end of the year. Current production is 11.9 million barrels per day. The mood of the American administration is combative. And where to go, otherwise the control of the Republicans over both chambers in Congress in the autumn will be total against the backdrop of a strong rise in fuel prices and the natural discontent of citizens. As long as no one has begun to sing a song about the decline in world GDP, oil prices will be above $100.00 a barrel. But there is a feeling that already in the third quarter we will hear prayers, prayers that the crisis will not be too strong, but that no one will have any doubts about it.

We see that the Central Bank is dissatisfied with the growth of the ruble against the dollar and gradually, through a series of minor relaxations, is returning to free trade. Thus while there is a ban for foreigners on participation in the auctions.

Also, the establishment of a fair exchange rate is hindered by the ban on the part of the US and the EU on the supply of cash to the country. If the pair consolidates below the level of 55.00 rubles per dollar, we should expect the return of the opportunity for foreigners to trade currencies on the Russian stock exchange.

It cannot be ruled out that importers will increase volumes and this will increase the demand for the dollar, but large deliveries of non-food products may take place under pressure from the West on the governments of countries through whose territory the products enter Russia. In particular, pressure on Kazakhstan as a transit country for parallel imports cannot be ruled out in the future.

Over the past week, the difference between long and short positions of managers increased by 15.5 thousand contracts. A solid group of buyers entered the market.

Growth scenario: we consider the July futures, the expiration date is July 14. Growth has stopped, but we continue to be in the ascending channel. We hold longs.

Falling scenario: we will go short after falling below 1050.0. The chances of a correction are good, as fears of grain shortages have subsided significantly. 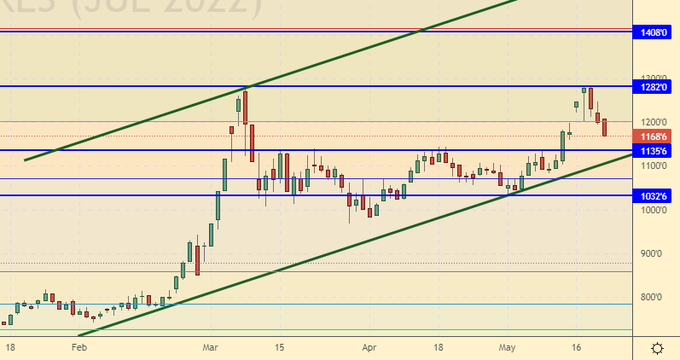 Over the past week, the difference between long and short positions of managers has decreased by one thousand contracts. Sellers enter the corn market for three weeks in a row.

Growth scenario: we consider the July futures, the expiration date is July 14. We are waiting for prices to fall to 700.0. We don’t buy.

Falling scenario: short from current levels is interesting. Selling pressure is intensifying. After falling below 750.0, you can add to the shorts. Recommendation: 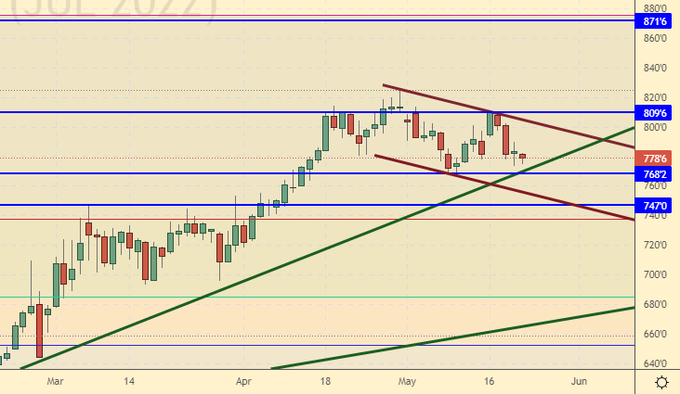 Growth scenario: we consider the July futures, the expiration date is July 14. It is possible that the market will try to test 1800.0. Unfortunately, the current levels are not interesting for purchases. Out of the market.

Falling scenario: if we really get to 1800.0, then shorting is a must. We do not open shorts from current levels. 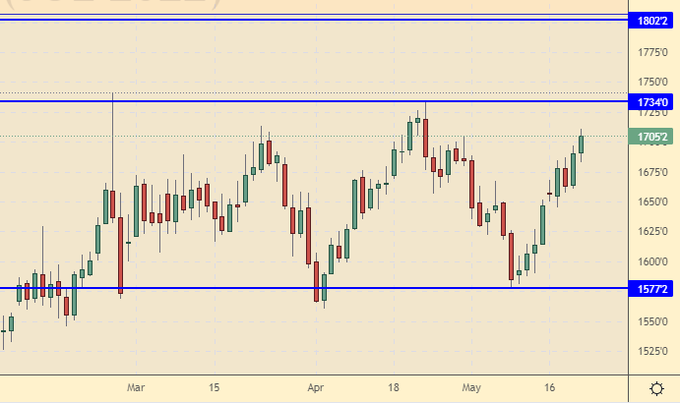 Growth scenario: we are considering the July futures, the expiration date is June 30. We go to 21.60. Stronger growth is not visible yet. 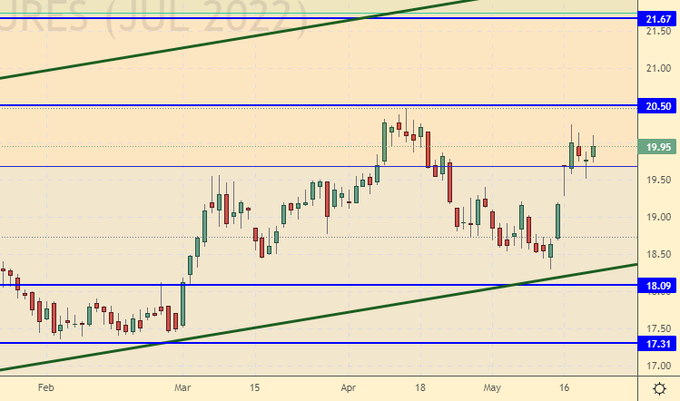 Growth scenario: we are considering the July futures, the expiration date is July 19. The picture is nervous, but we will continue to keep longs. Moreover, those who wish can buy here.

Falling scenario: for the time being, we will refrain from selling. If the market drops below 210.0, we will think about going short again. 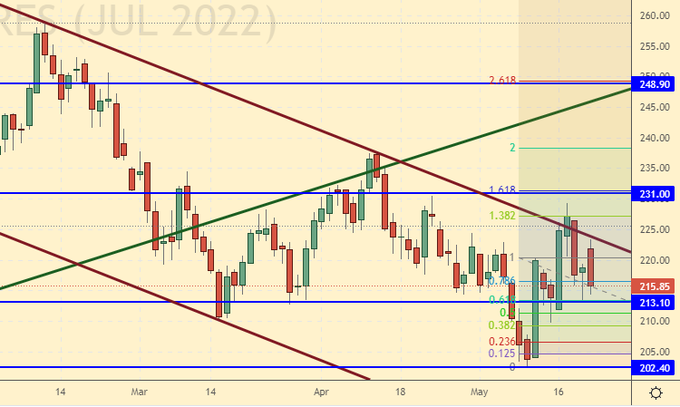 Over the past week, the difference between long and short positions of managers increased by 21.6 thousand contracts. The bulls are active. So far, speculators have no faith in the market turning down.

Growth scenario: we are considering the May futures, the expiration date is May 31. We will keep longs. Those who wish will be able to add after the growth above 116.00.

Falling scenario: the possibility of a market fall in this situation cannot be denied. The only embarrassing thing is that the demand is not fully satisfied yet and the deficit in the market remains. From 0.5 to 1 million barrels of oil per day, the economy now receives less. Out of the market. 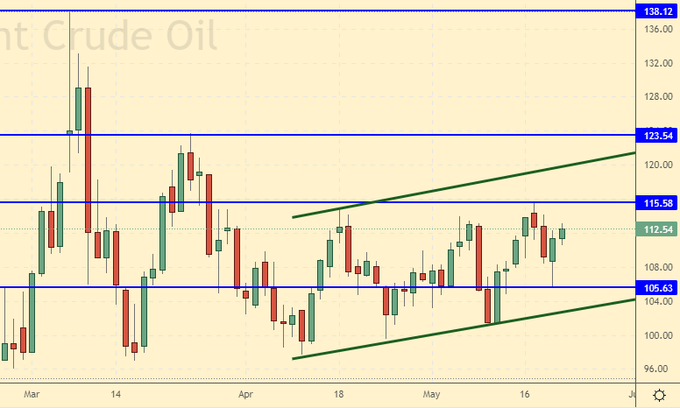 Fundamental US data: the number of active drilling rigs increased by 13 units and now stands at 576 units.

Last week the difference between long and short positions of managers increased by 41.7 thousand contracts. Bulls increase their influence. Growth is strong. We can assume that large players will enter the market.

Growth scenario: we are considering the July futures, the expiration date is June 21. We will keep open last week longs. In case of a break above 117.00, you can add.

Falling scenario: short is possible. But it’s better to wait. If next week the bulls fail to set a new local maximum, then it will be possible to talk about sales. 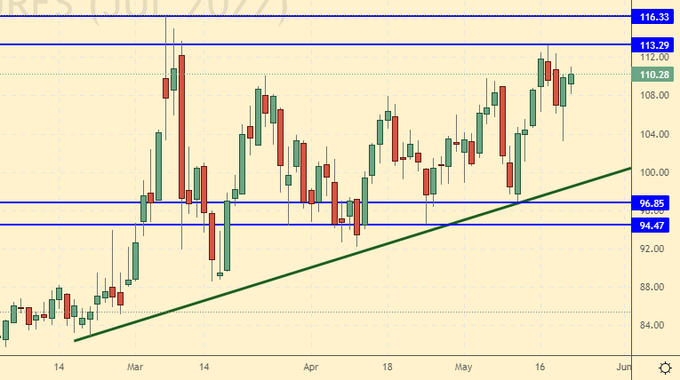 Growth scenario: we consider the June futures, the expiration date is June 10. We won’t be buying this week. The situation is balanced.

Falling scenario: against the backdrop of high oil prices, a deep fall would now look strange. However, a rollback to 800.0 is possible. Recommendation: 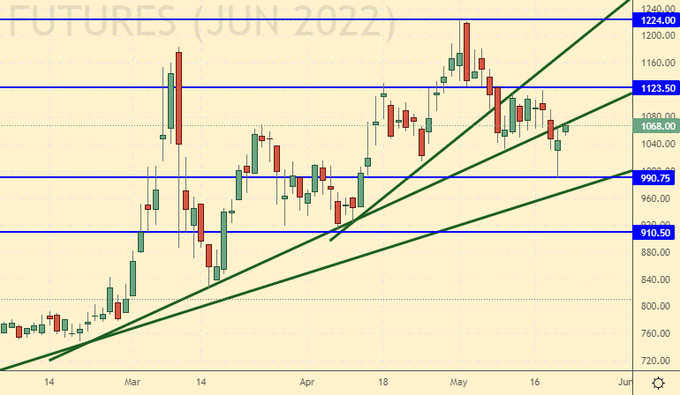 Growth scenario: we are considering the July futures, the expiration date is June 28. We continue to refrain from shopping. It’s not even mid-summer yet to plan for the winter. Prices may drop.

Falling scenario: we continue to believe that it would be interesting to enter short from 10.200. Sales from current levels are possible. Movements in gas in the US are sharp. 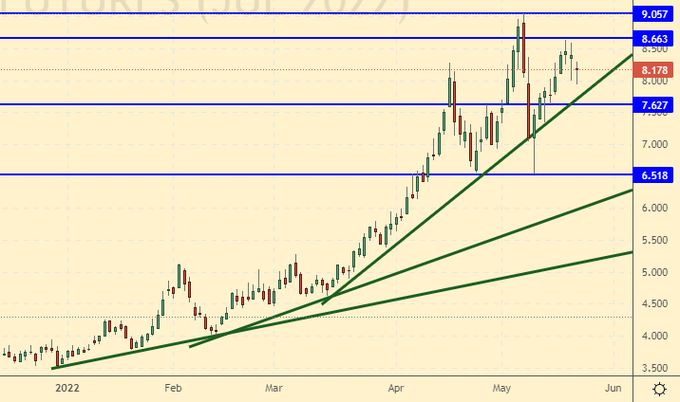 Growth scenario: current upswing does not look aggressive. Most likely sellers will meet from 1860 and from 1890. We do not buy.

Falling scenario: holding shorts. If there is a blow in 1890 it can be sold. 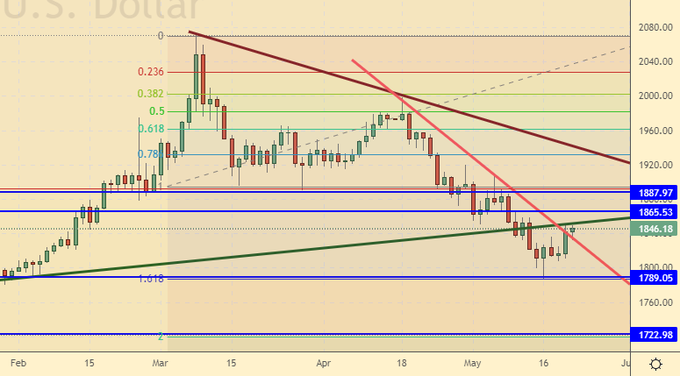 Growth scenario: chances are good to reach 1.0700, moving higher requires higher expectations of ECB rate hike on June 9th. If the ECB maintains a weak monetary policy, the pair will fall to parity.

Falling scenario: we will sell when we return to the area of 1.1000, not lower. 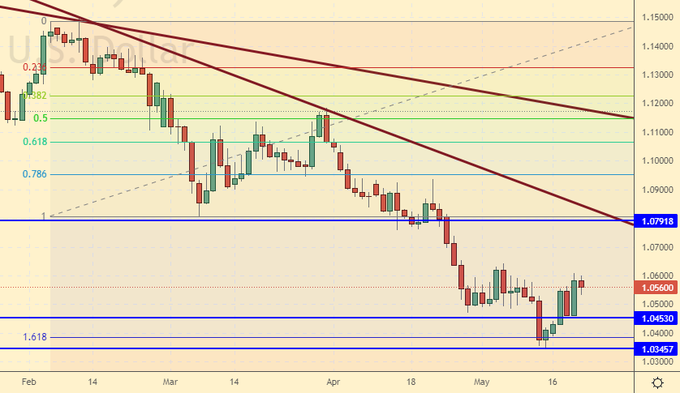 Growth scenario: if the pair draws a green candle next week with a close above 65.00, then it will be possible to buy. The chances of growth are still small, but everything can change, provided that the Central Bank continues to gradually remove regulation.

Falling scenario: we continue to refrain from selling. The current course is already unnerving the government. At the moment, budget revenues are at a good level, but they will clearly decrease by the end of the year. 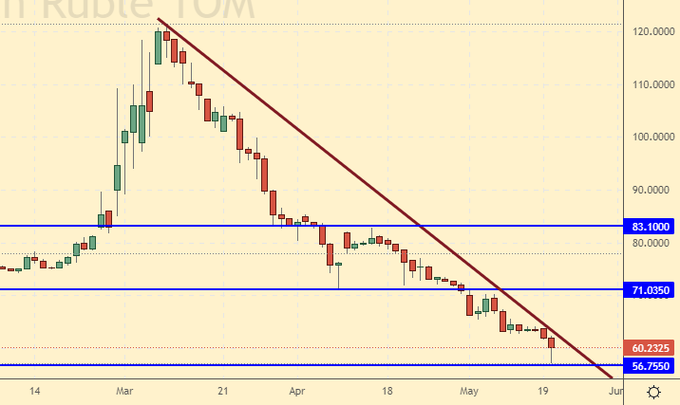 Growth scenario: the Russian stock market tried to grow on the expectations of dividends from Gazprom. But the company is unlikely to give investors as much as 50 rubles per share, as ordinary people expect. And 10 rubles is enough. The Board of Directors will be held on May 26th. We don’t believe in growth. Out of the market.

Falling scenario: the market touched 126000, it was possible to sell there. Shorts from 130,000 would be ideal. It is possible that we will reach this mark next week. 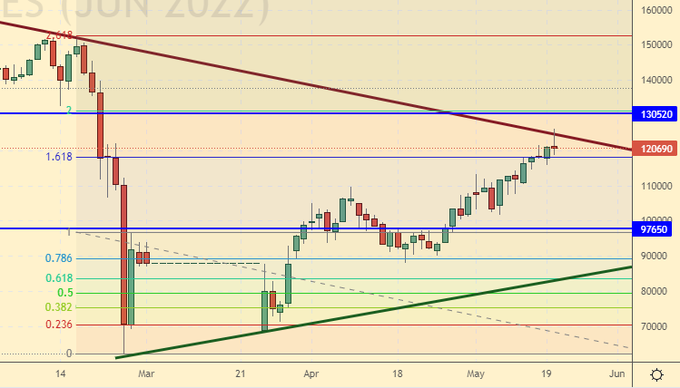