It is not yet clear what the showers will do in Europe, will help to transfer the heat to wheat, or to a greater extent will cause irreparable harm. Mostly mountainous regions suffer, but there are only grapes, fruits and various exotics, there are no main crops on the slopes of the hills. Nevertheless, the picture from Germany and Austria is unpleasant, so on Monday and Tuesday the wheat market may react with moderate growth.

In the US, increased corn stocks and reduced competition from Brazil are improving export prospects for the current marketing year. US corn exports are forecast to be 63 million tonnes. US export forecasts remain at an all-time high, bringing the US share of world corn trade to nearly 40 percent, the highest since 17/18, when the other three major corn exporters — Brazil, Argentina and Ukraine — were in trouble with harvest due to unfavorable weather.

The guys from OPEC + could not sleep and did not rest on the weekend. The conspirators decided all the questions on Sunday. Traders are saying «sincere» thanks to you. On Monday night, we will most likely have a gap down, well, come on, we will survive somehow.

So, there will be an increase in oil production. They will increase 400 thousand barrels per day every month until the current restrictions of 5.8 million barrels per day are completely removed. The next formal meeting will be held in September, and in December they’ll make sure they are on the same page.

From the point of view of common sense, the decision is not bad, especially since the growth in oil demand is now beyond doubt. This time, the intellect is felt.

In Germany and Austria, downpours caused floods, which led to the collapse in several areas of these countries. The oil market will remain indifferent to these events, provided that the floods are not biblical.

The market is calmly awaiting a rate hike from the RF Central Bank on Friday. We do not see a strong desire of speculators to weaken the ruble or strengthen it.

OPEC + will increase oil production from August. This event can force prices to correct, but we will not see a strong fall, for example, to the area of $ 60, at this stage, which will allow the ruble to feel tolerable against the dollar in the coming month.

But as far as the dollar is concerned, everything is not so simple. Powell’s reluctance to notice inflation could lead to a fall in the American currency in the fall. Our references to the fact that the labor market in America is weak, since three homeless people under the Brooklyn Bridge do not want to work, do not stand up to scrutiny.

In addition, various programs of assistance and subsidies, for example, for children in the amount of $ 300 a month, will force almost 2 trillion to be printed. dollars. They write about 1.9 trillion. But who notices such trifles: 100 billion there, 100 billion here. We have only one question: did your system go haywire, gentlemen from the State Department.

Over the past week, the difference between long and short positions of managers increased by 9.9 thousand contracts. Moreover, the difference itself is negative. Thus, the number of sellers in the market increases, while the number of buyers decreases. Therefore, we perceive the current rise in prices as an opportunity for sales.

Growth scenario: September futures, expiration date September 14. It will be extremely difficult to get above the 700.0 area. We do not enter long. August is coming soon. We should see at least a slight correction.

Falling scenario: when a daily candle appears with an average or long red body, we will sell. The current surge is a bluff. 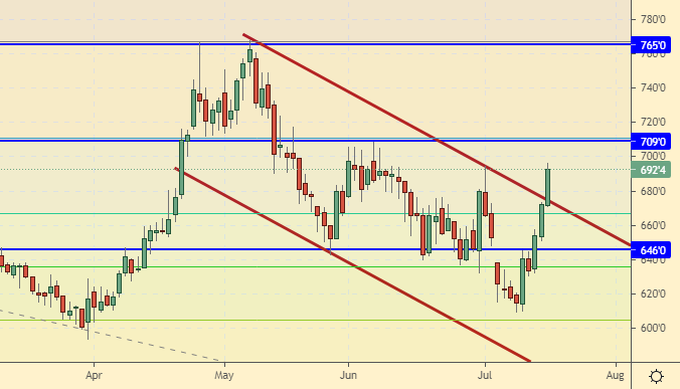 Over the past week, the difference between long and short positions of managers decreased by 12.5 thousand contracts. The difference itself is still positive, but the bulls are quickly leaving the market. We perceive any growth as a sales opportunity.

Growth scenario: September futures, expiration date September 14. We will continue to refrain from buying, as the long-term support line is under the threat of breaking.

Falling scenario: when trying to close the gap at 587.0, shorts are required. Crop prospects remain good, there is no reason for price increases. Recommendation: 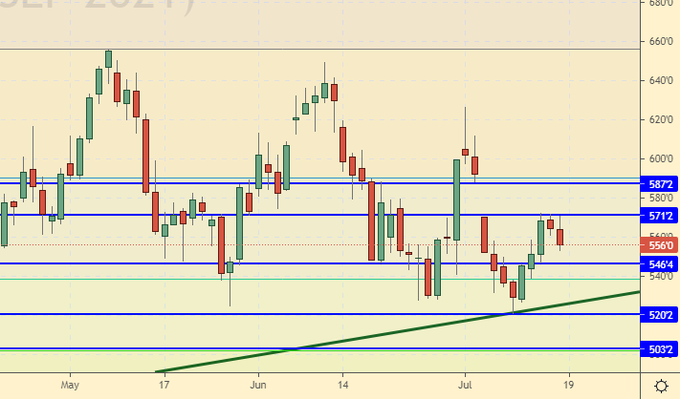 Growth scenario: the position is of no interest for entering a long. Out of the market.

Falling scenario: we will continue to sell. You can sell now, you can wait for a confirmation in the form of a red candle and only then go short. 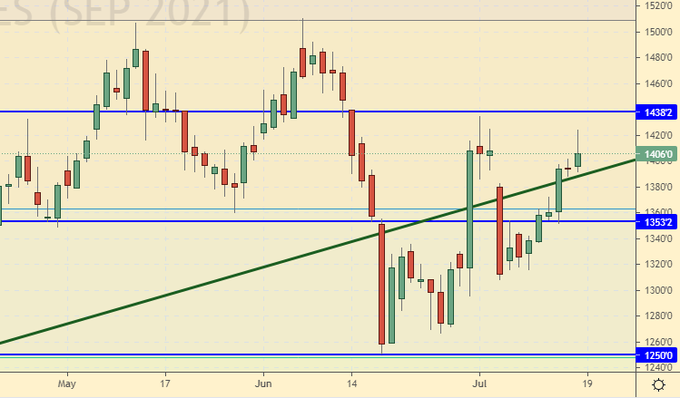 Falling scenario: from 19.50 we will definitely sell. Short from the current levels is possible, but I would like to see a red candle as an additional signal. 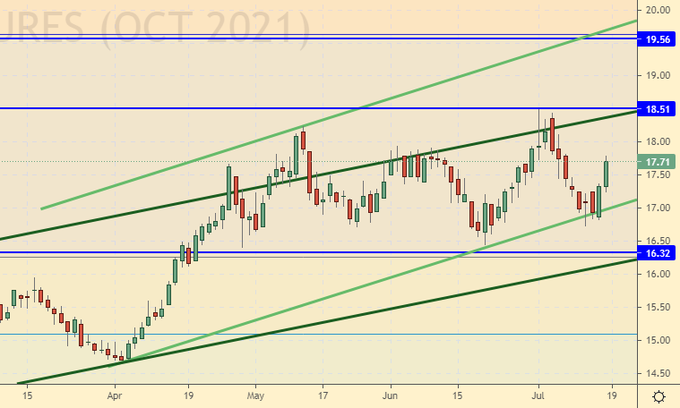 Growth scenario: September futures, expiration date September 20. In case of growth above 168.00, it can be added to the current longs. The bulls are keeping the situation under control for now.

Falling scenario: the levels are not bad for entering the sale. There will be a fight here, but if a red candle appears, you can go short. 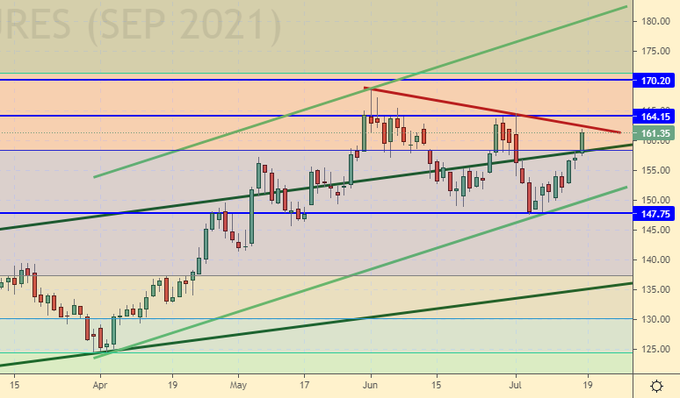 Over the past week, the difference between long and short positions of managers increased by 5.1 thousand contracts. Sellers-speculators more actively left the market, which led to the fact that there were a few more bulls on the market. However, it is unlikely that after today’s OPEC + decision to increase production, buyers will become the main force in the market.

Growth scenario: July futures, expiration date July 30. We continue to assume that you can buy from 69.00. But it will be necessary to look at the nature of the fall on Monday and Tuesday. If it is fast, then you should refrain from entering the long.

Falling scenario: after falling below 72.00, you can add to the previously opened shorts. If there is a rebound to 76.00, sell. Since such market behavior against the background of production growth will be considered a bluff. 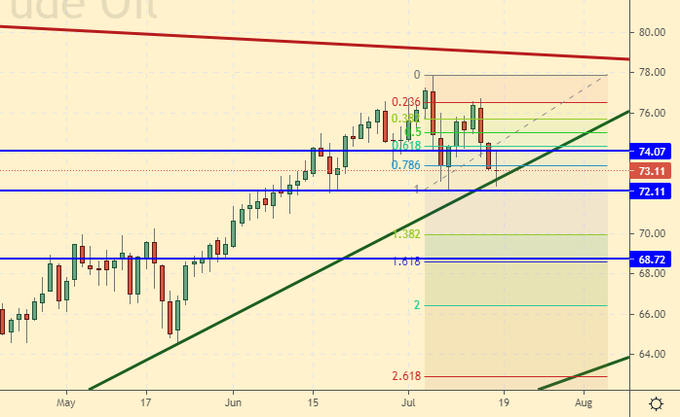 Fundamental US data: the number of active drilling rigs increased by 2 units and is 380 units.

Over the past week, the difference between long and short positions of managers increased by 3.1 thousand contracts. Bulls came to the market a little more actively than bears. However, this situation will soon be reversed due to the OPEC + deal to increase production.

Growth scenario: September futures, the expiration date is August 20. We continue to remain out of the market. In case of a fall to 66.50, one can buy, provided that the fall is not quick. Falling scenario: our mantras about falling are still working. If there is a bounce up to 74.00 amid the OPEC + decision, then sell is mandatory. Recommendation: 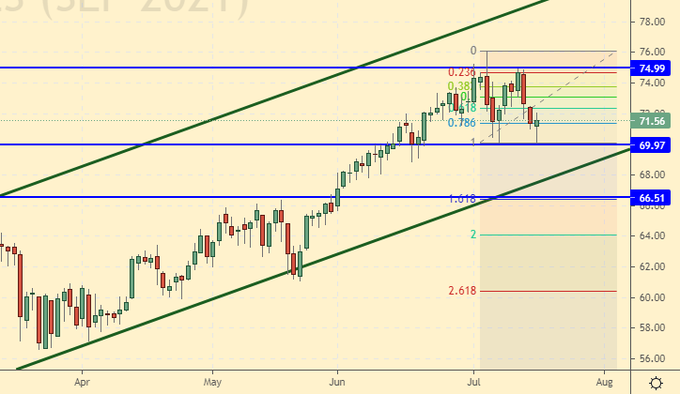 Growth scenario: August futures, the expiration date is August 12th. Growth is not visible. Yes, we have not broken through the support yet, but the market is extremely tired of moving up.

Falling scenario: nothing has changed. We continue to wait for the support breakout. The position in terms of technique for short is not bad, as the market has been growing for a long time in a relatively narrow price channel. 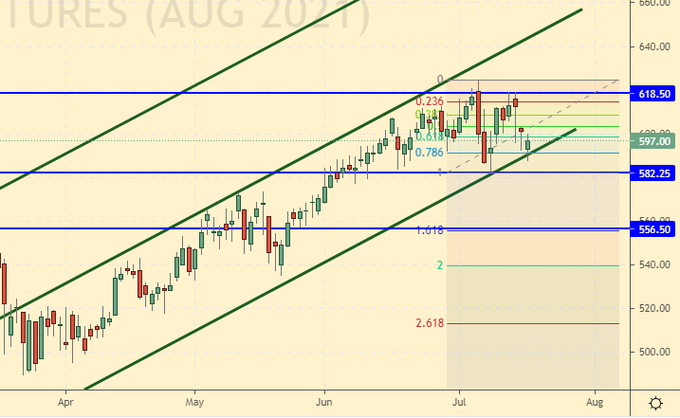 Growth scenario: August futures, expiration date July 28. The bulls are stubbornly holding the market above 3.500, which creates preconditions for further price growth to 4.150.

Falling scenario: think about shorts from 4.150. The prospect of completing Nord Stream 2 should cool the market somewhat. 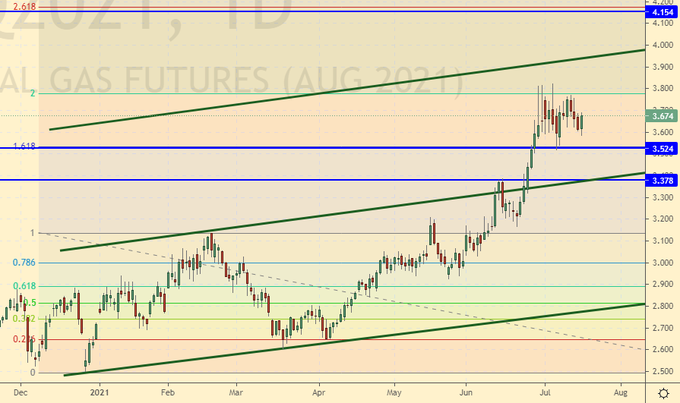 Growth scenario: we continue to consider the current levels to be interesting for purchases. If, against the background of money printing, gold falls somewhere in the future by 1700 or 1600, then it will be necessary to buy there.

Falling scenario: after rising to the level of 1850 and a rollback from it downward, you can sell. There are no other interesting ideas for a short on the market at the moment. 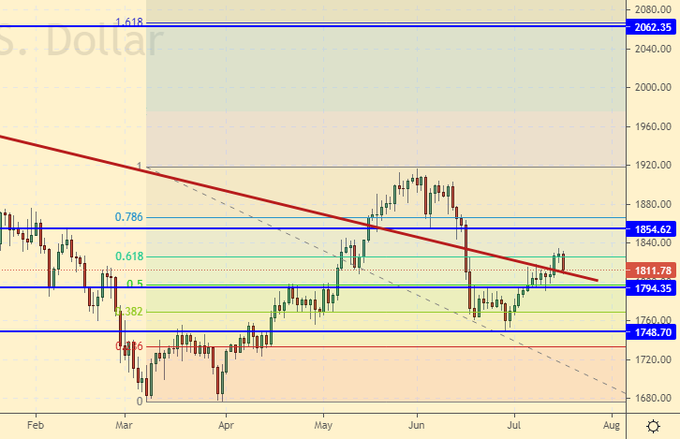 Growth scenario: floods in Europe are likely to undermine the euro on Monday. The damage will be tens of billions. As before, we will think about growth only after the market rises above 1.2100.

Falling scenario: keep short. Americans are flooding problems with money, but things are no better in Europe either. We will fall to 1.1500, possibly we will go to 1.1000. 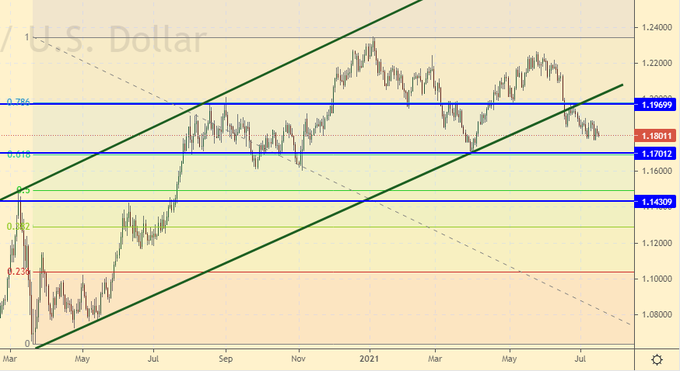 Growth scenario: as in the previous week, we believe that ruble strengthening to 73.40 is possible. Stronger strengthening is unlikely to be possible. It is unlikely that oil prices will continue to rise. The Central Bank of the Russian Federation will raise the rate, but these expectations are already in the price. While we look up the pair.

Falling scenario: if we rise to 76.20, we will sell, as there, most likely, the phase of strengthening of the dollar index will end. Short from current levels can only be tactical on 1H intervals. Recommendations: 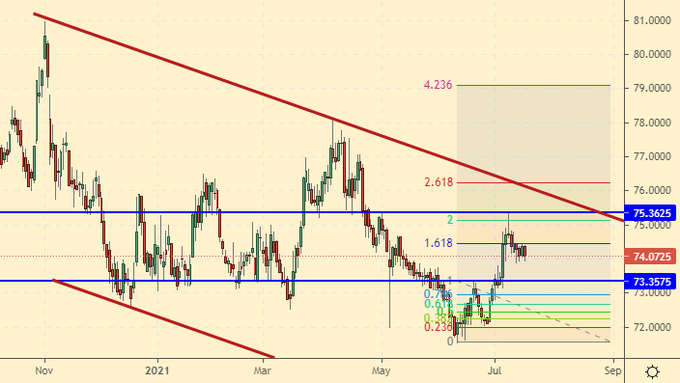 Growth scenario: the global stock market, and without the help of Powell, who does not want to raise rates amid inflation, began to decline under its own weight. In addition, the Russian stock market is under pressure due to the expectation of an increase in the rate of the Central Bank of the Russian Federation. For now, we will postpone shopping. 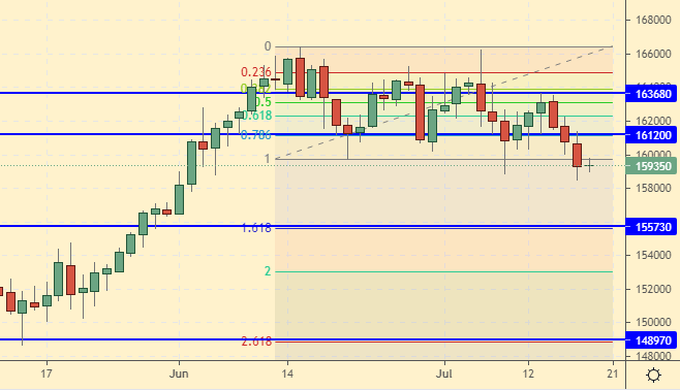