In recent days, large agencies have been revising the wheat harvest in the 21/22 season in the Northern hemisphere downward due to hot weather in the United States and several regions of Europe and Russia.

For example, the European Commission has lowered estimates of soft wheat production in the EU-27 (excluding the UK) from 126.2 million tons to 125.8 million tons.

Traders in the US were unhappy with the increase in the actual planted area for wheat and corn in the country, which triggered a rise in prices on Wednesday June 30th. Some trading participants preferred to fix profits immediately, but the market did not roll back to the levels from which the growth took place. At the moment, buyers have a tactical advantage due to the last price spurt upward.

OPEC + countries failed to agree on oil production quotas either on Thursday or Friday. The meeting was rescheduled for Monday. The meeting should start at 16:00 Moscow time. Considering that July 5 will be a day off in the US, we can expect an extremely volatile Monday evening in the thin market and no less volatile Tuesday.

UAE demanded a revision of the level from which the production quota is calculated for them, which caused a protest from Russia and Saudi Arabia. Each side has its own allies. The debate is dragging on.

It should be noted that the OPEC + countries made a fundamental decision on the need to increase production by 2 million barrels per day by the end of the year. The only question is who and how much will be allowed to mine.

In general, the growth in oil demand has already been incorporated into current prices. Correction is ready. However, if the OPEC + countries at the negotiations cannot find a solution that suits everyone and postpone the meeting for a month, Brent crude will go to $ 80.00 per barrel.

The exchange rate of the Russian currency in the coming weeks will depend on the situation with the «delta» strain in the country. If another lockdown is introduced in large cities, the dollar/ruble pair will tend to grow despite good price levels on the oil market and Nabiullina’s promises to raise the rate on the 23rd.

Until the market dramatizes the situation with the US dollar. In the coming months, the American currency will receive fundamental support from the forecasts for significant growth. The IMF predicts US GDP growth of 7% this year and 5% next year.

Over the past week, the difference between long and short positions of managers decreased by 3.6 thousand contracts. The market has almost reached a zero balance between speculators, buyers and speculators, sellers. As we approach the middle of summer this is not surprising. One should hardly expect strong movements in the market next week.

Growth scenario: September futures, expiration date September 14. The bulls pushed the market up aggressively. We’ll have to react to this action. We will buy at current prices.

Falling scenario: if prices fall below 640.0, sellers will return to the market. Given the difficult weather situation, the fall in prices is unlikely to be strong. If the market rolls back to 570.0 it will be a real miracle. Opening shorts when prices fall, we will count on this miracle. 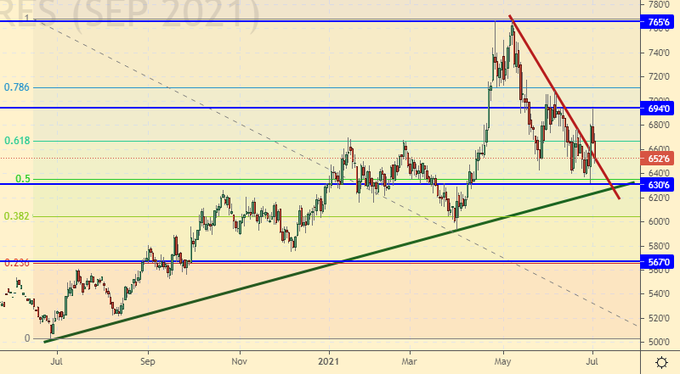 Over the past week, the difference between long and short positions of managers decreased by 4.3 thousand contracts. There are fewer bulls in the market, however, they may return if the USDA report on the 12th includes a decrease in the forecast for gross collection.

Growth scenario: September futures, expiration date September 14. The established hot weather can make traders fearful. Corn will not suffer as much as wheat, but the general drop in gross grain harvest will support prices on the market and for corn as well. We will buy on a rollback to 560.0.

Falling scenario: only a market falling below 540.0 will give sellers a chance to reverse the situation. We do not enter the shorts yet.

Sale: think after the market falls below 540.0. 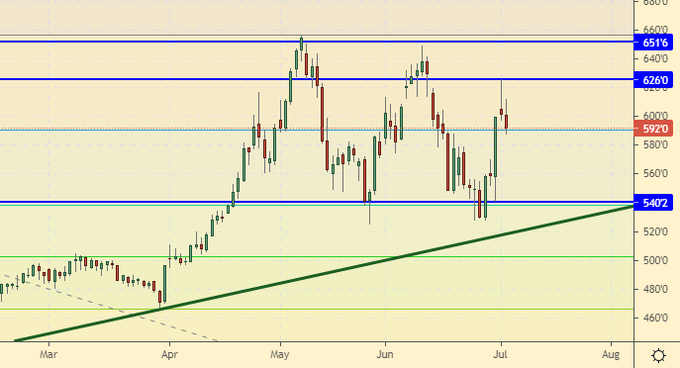 Growth scenario: September futures, expiration date September 14. If the market goes above 1500.0, then there will be a threat of further growth. We will monitor the situation. In case of a rollback to 1340.0, we will make a tactical buy.

Falling scenario: we will enter the sale again despite the unsuccessful short a week earlier. A rollback to 1100.0 is still possible. 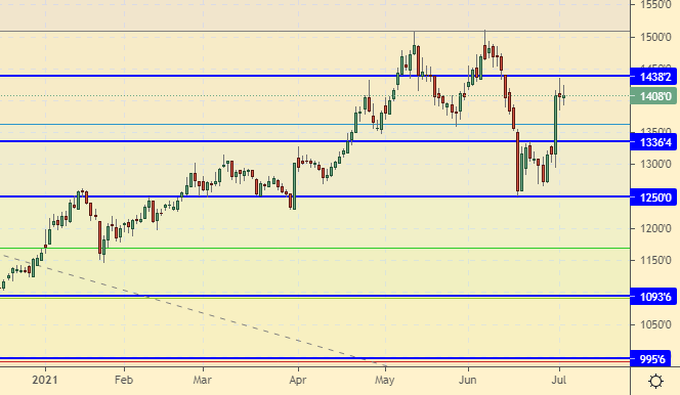 Growth scenario: October futures, the expiration date is September 30. «Here you have to go long, because you don’t want to miss the move to 19.50, » we wrote a week earlier. So far, our purchase is profitable. Let’s wait for the goal to be achieved. Move the stop along the trend.

Falling scenario: from 19.50 we will definitely sell. Second option: we will enter short after falling below 17.00. 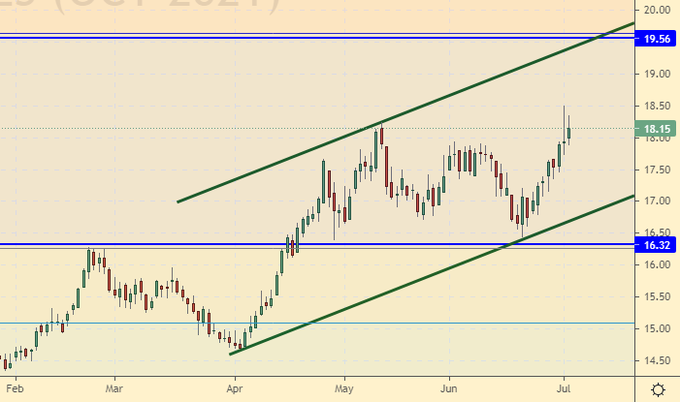 Growth scenario: July futures, expiration date July 20. If the long is closed by the stop at 148.00, then next time we will buy from 138.00. For now, we are holding positions opened earlier.

Falling scenario: somewhat provocative sale survived. It is very likely that we are heading to 138.00. We keep the shorts. After falling below 148.00, you can add. 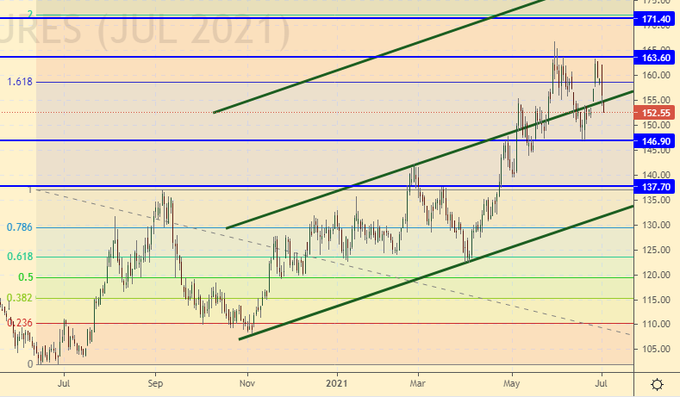 The difference between long and short positions of managers decreased by 5.1 thousand contracts, which tells us about the growing interest in selling from speculators. A pullback in the market is ripe and some traders are betting on short, not looking at what OPEC + will decide there.

Growth scenario: July futures, expiration date July 30. We continue to remain out of the market. There are no good shopping levels. We are waiting for a rollback.

Falling scenario: it’s a pity, but the OPEC + meeting was postponed to Monday. The cartel’s decision is not known. In this situation, close the shorts at current prices and reopen after the market falls below 74.90. 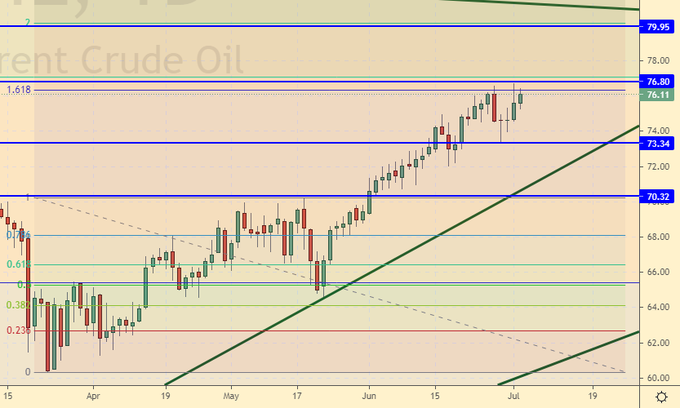 Fundamental US data: the number of active drilling rigs increased by 4 units to 376 units.

Over the past week, the difference between long and short positions of managers decreased by 18.3 thousand contracts. The number of sellers in the market is increasing, which should lead to a downward reversal.

Growth scenario: August futures, the expiration date is July 20. We continue to remain out of the market. Quotes have been growing for more than a year, a rollback is needed for a good buy.

Falling scenario: since it is not yet clear whether there will be an increase in production or not, we will sell only after prices fall below 73.00. Recommendation: 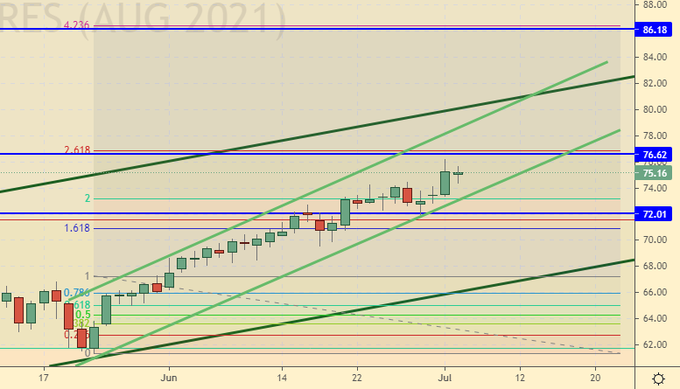 Growth scenario: July futures, expiration date is July 12th. The market remains in a growing channel. We will not buy at current prices. We look forward to a rollback.

Falling scenario: if the market falls below 575.00, we will sell. The target at 520.00 looks realistic. Recommendation: 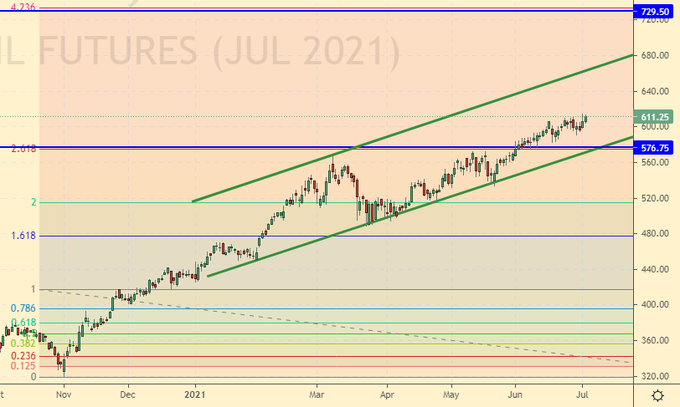 Growth scenario: August futures, expiration date July 28. We see the “high waves” reversal candlestick formation. The move to 4.14 will most likely be delayed for some time. We will buy on a pullback to 3.400.

Falling scenario: we will not go short. Both Europe and Asia are absorbing gas in huge portions. It is hot in summer, cold in winter. Horror. Recommendation: 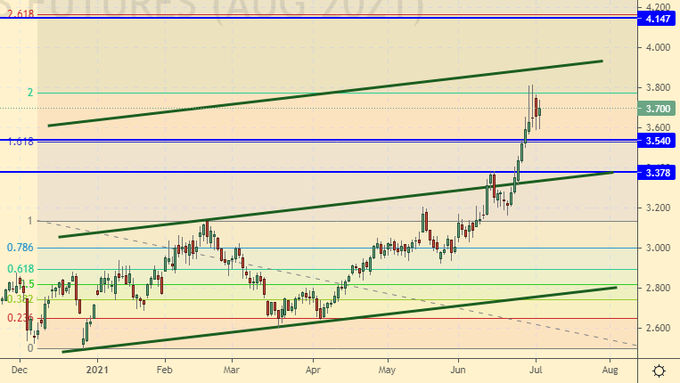 Growth scenario: you can buy here in the medium term. From 1735 can be added. The fall of gold below 1700 without an actual increase in the US rate will be perceived as a provocation.

Falling scenario: we continue to consider that from 1850 it is possible to sell. There are no other interesting levels for a short on the market at the moment. 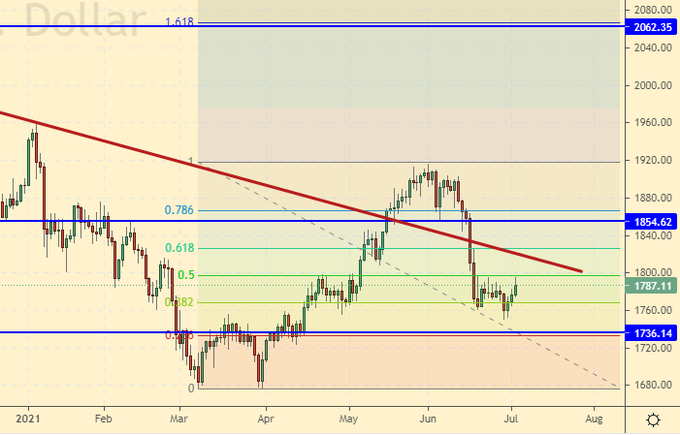 Growth scenario: we will buy only after growth above 1.2100. In the current situation, sellers have a slight advantage.

Falling scenario: keep short. The move to 1.1050 will be possible if the crowd believes in the strengthening of the Fed’s rhetoric on July 28th. Strong data on the US labor market in June may lead Powell to speculate about a rate hike in the first half of 2022. 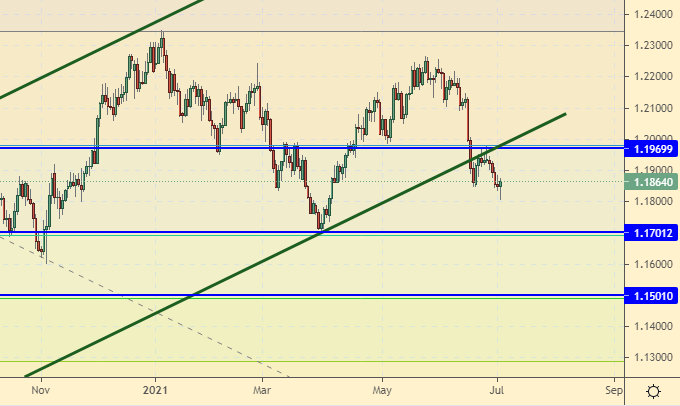 Growth scenario: if we assume that the OPEC + countries agree to increase production and oil starts to fall, then the dollar/ruble rate will very quickly turn out to be at 74.50. Stronger growth will be possible only if the epidemiological situation in large cities worsens.

Falling scenario: while we do not have clarity with the decisions that the Fed will take in the future, it is not worth counting on the weakening of the dollar against the ruble. We do not enter the short. Recommendations: 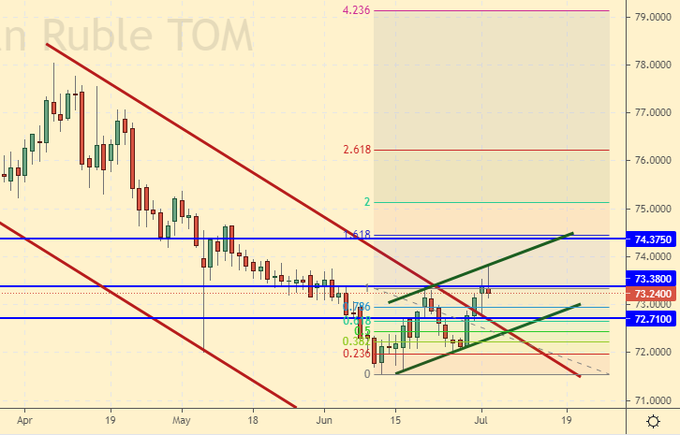 Growth scenario: if next week the index manages to gain a foothold above 165,000, then this will create preconditions for the continuation of the upward movement.

Expectations of private investors in the US from investing in the stock market are at historic highs and amount to 60% according to a number of polls, which is far beyond reasonable, since the growth of indices over the past year was at the level of 12-15%. In Russia, the situation is probably similar. People want a lot of money and are willing to buy at any price. These high expectations can push the market up to the 200,000 area. It is highly undesirable to miss such a movement.

Falling scenario: fight for short. Let’s sell at the current levels. However, mentally we are ready for the market to go higher. 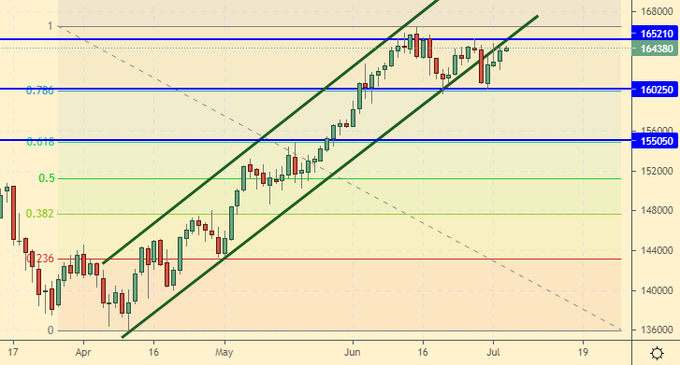