The next USDA forecast for the season 21/22 was released, which turned out to be no less optimistic than the forecast published in May. Analysts are not yet expecting a decrease in the gross harvest for wheat and corn.

Given the excellent gross yield expectations, we do not see a strong fall in prices. Traders continue to believe in strong demand for food amid the difficult situation with the Chinese virus.

It is unlikely that Europe will be safer after the football championship. Quite the opposite. We are waiting for another outbreak of infection due to filled stadiums, even if this occupancy rate is 50 and even 25 percent. It’s hard to understand why we need the feast at a time of plague. As a last resort, it would be possible to run after the ball even with empty stands. We are preparing for the next quarantines.

In Moscow, people have already been left to sit at home from the 15th to the 19th.

Considering that food costs have increased, and this has happened everywhere in the world, and wages have remained at the same level, there are doubts about the growth in demand for such goods as sugar, coffee, fruits, beef, milk. Most likely, the grains will remain at high levels, the rest of the «excesses» in quotation marks will experience a strong correction, especially if the dollar is growing.

Last week, the oil market grew at a moderate pace, without giving us any reason to think about a possible downward reversal.

The main question at the moment is whether the rally in the commodity markets is over or will it continue under the pretext of a weak dollar and inflation.

We are waiting for the Fed meeting June 16th. It is unlikely that Powell will raise the rate, but he may declare the end of the asset buyback policy, which will be the first step towards a possible tightening of the rate in the future. The rise in consumer inflation in the United States up to 5% per annum is a reason to pay attention to it. The growth rates of prices turned out to be the most powerful in the last 40 years, and if the Fed chairman does not comment on this event in any way, then the commodities market will have a new chance to conquer the peaks.

Without the Fed’s reaction to the rise in prices, we will see Brent at 85.00.

The Central Bank raised the rate by 0.5% to 5.5% per annum. So far, Nabiullina agrees with Powell. Inflation is temporary, everything will be fine. No further rate hikes will be required. If there were other views on the situation, we could see an increase in the rate by both 1% and 1.5%.

It is possible to predict the filling of warehouses with products in three to six months, provided that prices for raw materials and primary processed products remain at current levels, since the end consumer could not increase their income during the pandemic. Once the warehouses are full, businesses will be forced to cut prices, which will lower inflation figures.

On the 16th, a meeting between Putin and Biden awaits us. The ruble will clearly depend on the outcome of the negotiations. The neutral result of the presidents’ communication will already be in favor of the ruble. If the Western press starts howling as if on cue after the end of the meeting about sanctions, ultimatums, or just about something gloomy, about something murky like the weather in Britain, then the ruble may lose ground. But! Far more important on this day will be the Fed meeting, may politicians forgive us. Chairman Powell is now the true King of the World. 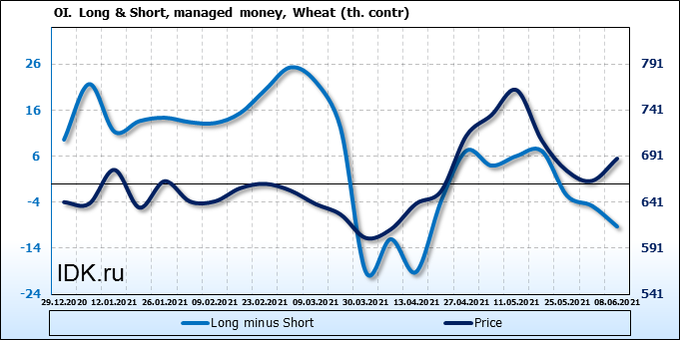 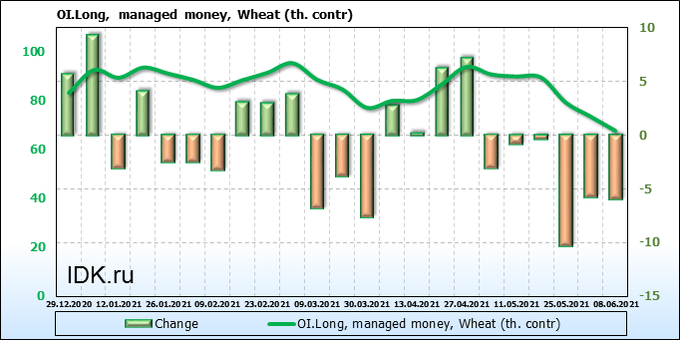 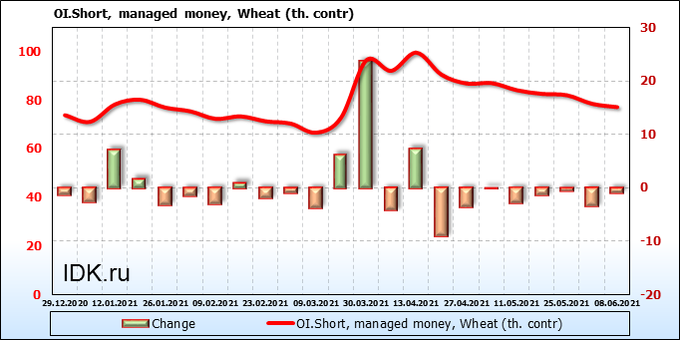 Despite the fact that the bulls continued to leave the market, prices refused to show new lows. It is possible that we will not be able to go below 650.0 cents a bushel this summer.

Growth scenario: July futures, expiration date July 14. Here you can buy and add to previously opened positions. For three days in a row, there is a purchase from 680.0, which may lead to continued growth.

Falling scenario: if you enter short, then with a very short stop order. The situation is still in favor of the bulls. 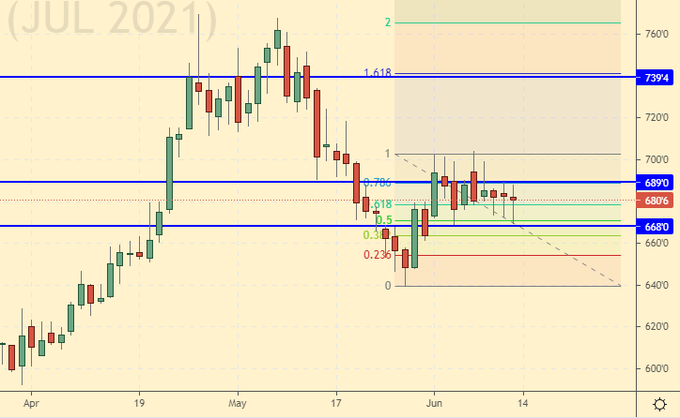 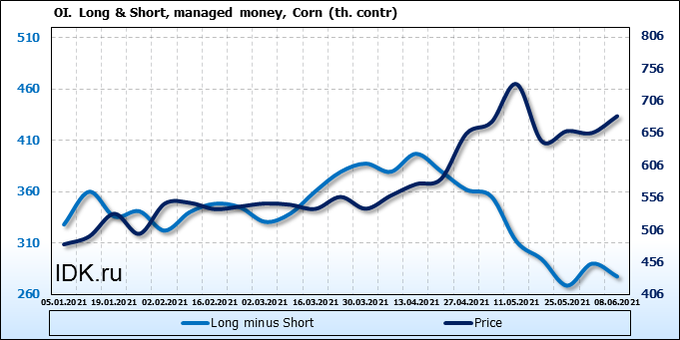 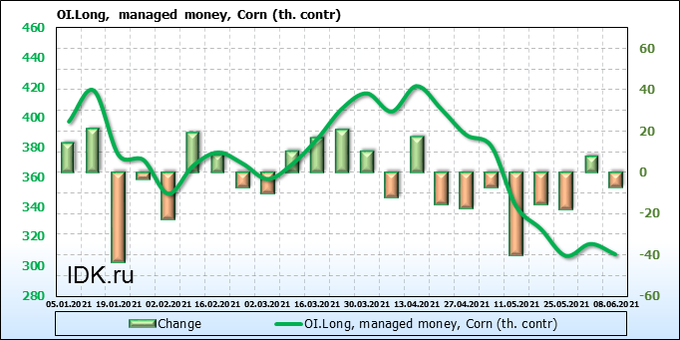 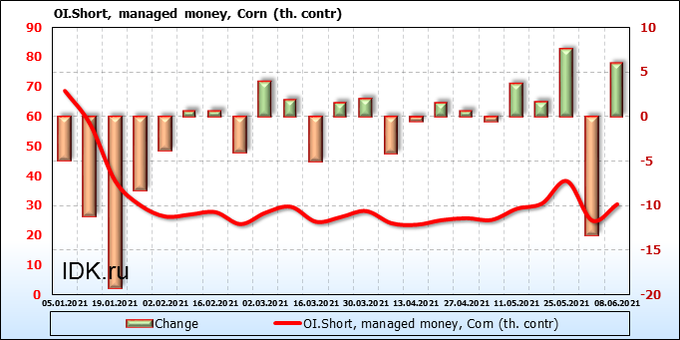 Sellers are returning to the market. Judging by the reaction to the release of data from the USDA, there are some chances for continued growth. However, taking into account the seasonality, we can assume that it will not be easy to break above the 720.0 level.

Growth scenario: July futures, expiration date July 14. Here you need to keep the previously opened longs. If on Wednesday the FRS does not support the dollar, at least verbally, the commodity group may continue to grow.

Falling scenario: short after falling below 665.0. Corn is clearly overestimating itself, showing the same price levels as wheat. Recommendation: Purchase: no. Those who are in position from 605.0, keep at 648.0. Target: 748.0. 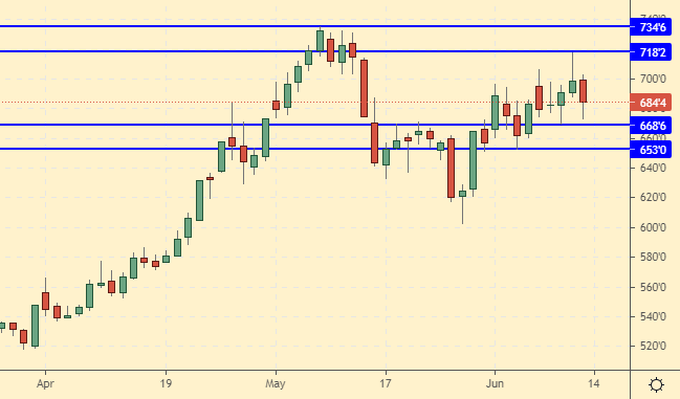 Growth scenario: consider the July futures, expiration date July 14. We will be out of the market. For purchases, we need a correction.

Falling scenario: when approaching 1710.0, you can sell. It is possible that the market will fall below 1500 without visiting 1710, but in this case, we would have looked at the development of the situation for another week before entering the short. Recommendation: 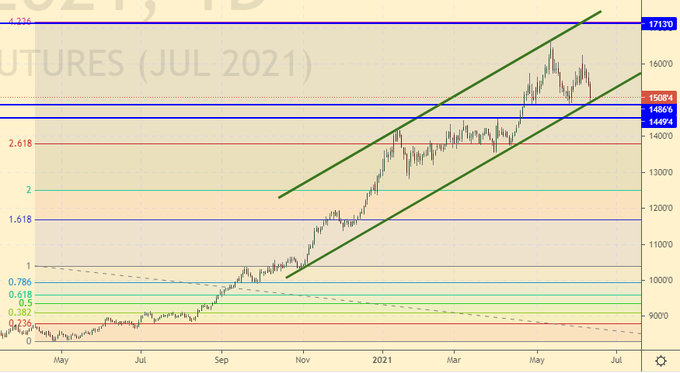 Growth scenario: July futures, expiration date June 30. The market above 18.50 is not visible. We do not buy. We need a rollback at least to 15.50. 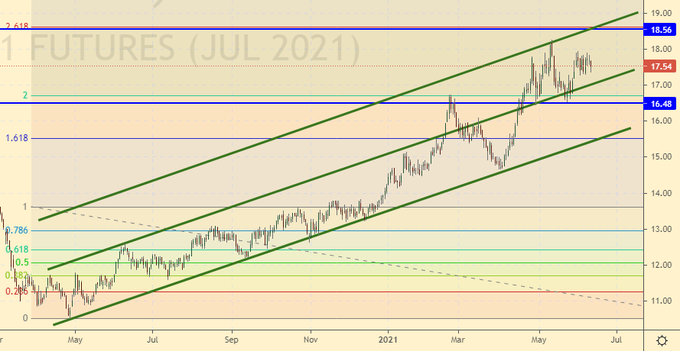 Growth scenario: July futures, expiration date July 20. We will not buy yet. Significant levels of support are at stake. Let’s hope for a rollback to the 140.0 area.

Falling scenario: it’s too bad that we don’t want to get to 170.0. If this does happen, we will sell without fail. 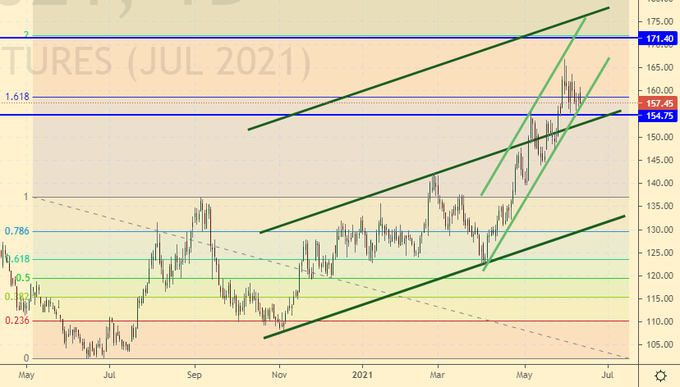 Bulls do not want to leave the market so far. If the Fed does not hint at a rate hike next week, more buyers could enter the market. Due to what we will turn down it is not yet visible.

Growth scenario: June futures, expiration date June 30. For us, nothing has changed on the daily intervals. We will wait for a rollback. We do not buy.

Falling scenario: sales from 76.40, this is the only thing that can be offered in this situation. Even if Powell’s speech is weak on Wednesday, the bulls are unlikely to be able to lift the market above this level. 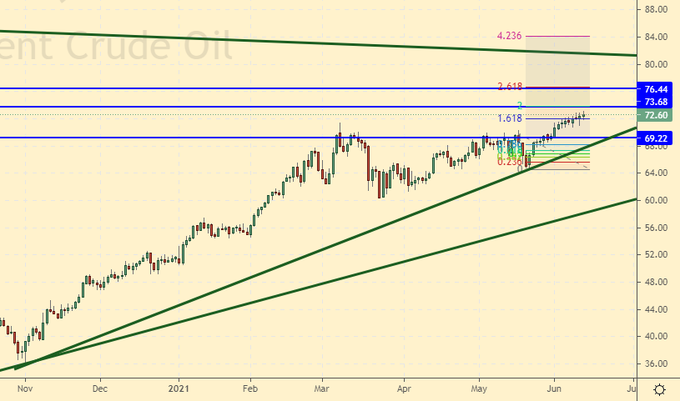 Fundamental US data: the number of active drilling rigs increased by 6 units to 365 units. 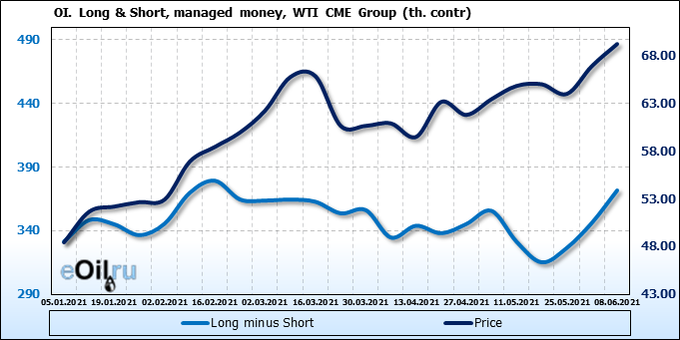 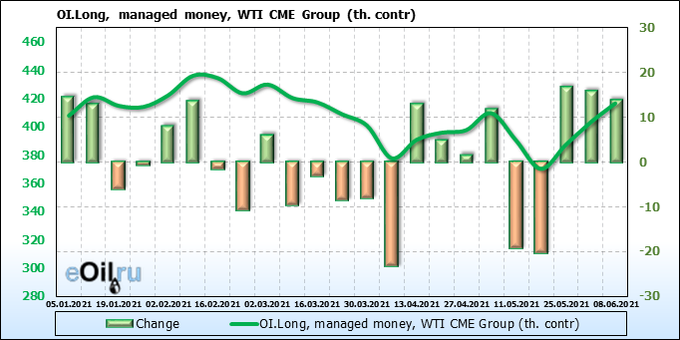 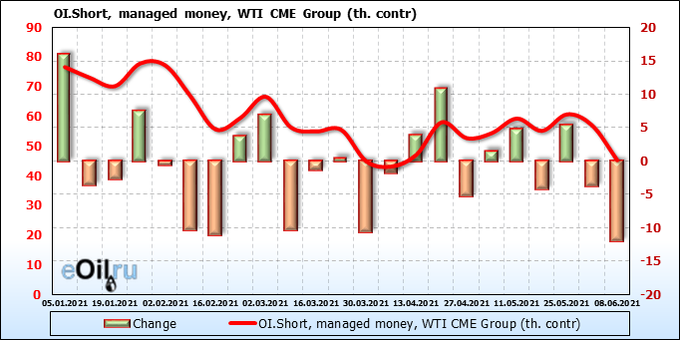 We are looking at the volumes of open interest of managers. You should take into account that this is data from three days ago (for Tuesday of the last week), it is also the most recent one that is published by the CME Group exchange.

Buyers have a firm grip on the situation. The pressure practically does not weaken. Nevertheless, the market is overbought, and a pause in growth is ripe.

Growth scenario: July futures, expiration date June 22. We will buy only after a rollback. Out of the market.

Falling scenario: here you have to sell. There are only one or two such situations a year. There is a high probability that the upward impulse has ended. Recommendation:

Growth scenario: July futures, expiration date is July 12th. We are not falling. If so, then add to the previously opened longs. The move to 730.0 is unlikely, but possible.

Falling scenario: we will keep the position we opened earlier, but there is no point in opening new ones now. 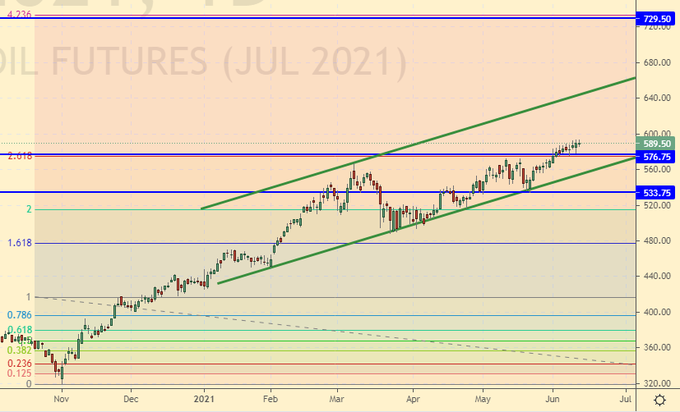 Falling scenario: step aside and give the market a chance to speak up. We will postpone sales. 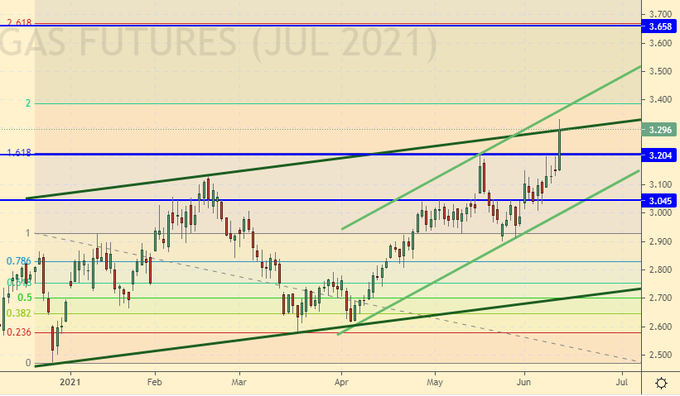 Growth scenario: the market is openly waiting for the Fed meeting on the 16th. One can only guess what Powell will say. In terms of technique, bulls have some advantage at the moment.

Falling scenario: nothing has changed. As long as we are above 1850, we will not consider shorts. High volatility on Wednesday is not excluded. Recommendations: 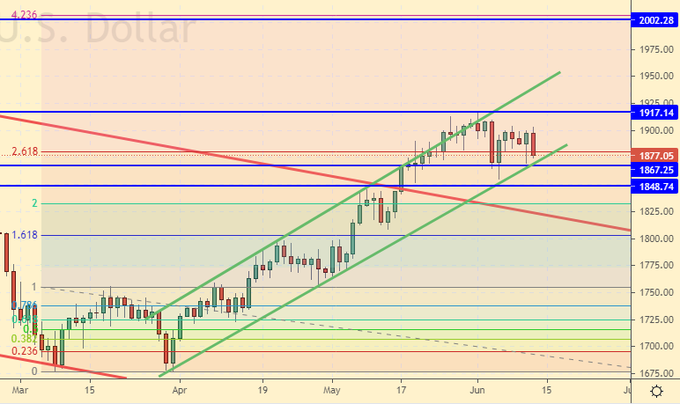 Growth scenario: if the pair falls below 1.1950, the euro bulls will have a hard time. In the meantime, this has not happened, we will count on the growth to 1.2800.

Falling scenario: you will need to follow the developments in the market after Powell’s speech on Wednesday. A pass below 1.1950 will draw a large number of dollar fans into the market. 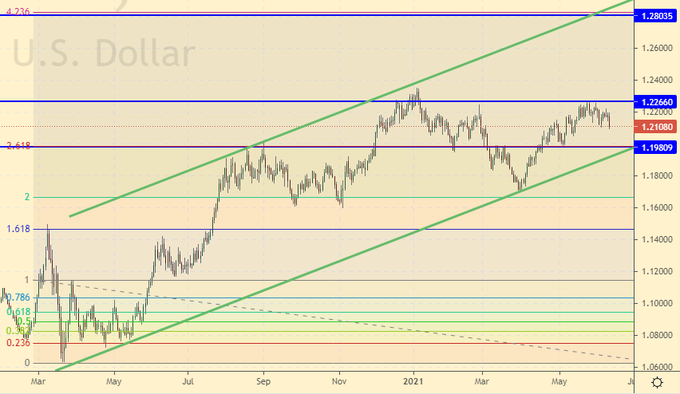 Growth scenario: the CBR raised the rate, but the market assessed the modest 0.5% increase as a sign of weakness. You can already buy here. Further, you can increase the aggression as the pair falls to 71.15, but only after the Fed meeting!

Falling scenario: we want to close the short on the target at 71.20. We hold the position. Move the stop order along the trend.

Growth scenario: if Putin and Biden find a common language in the negotiations on the 16th, then the Russian stock market will have a chance to see 200000.

The expectation of visiting this mark will increase even more if the dollar index falls. Attention is drawn to the G7 meeting in London. The queen also came. Apparently they were discussing what to do. We do not consider a pandemic, Iran or any other «trifle» as a reason for the meeting. Something is happening behind the scenes. Something is wrong. Ladies and gentlemen look sideways towards the Kremlin, trying to smile. We also see some uncertain signals from our side. Everyone is somehow uncomfortable, but we must continue to coexist.

Falling scenario: it’s scary to go into the short. In the area of 170,000 there could be a fight. But there are no clear signs of a downward reversal of the market so far, so we will discard shorts. Recommendations: 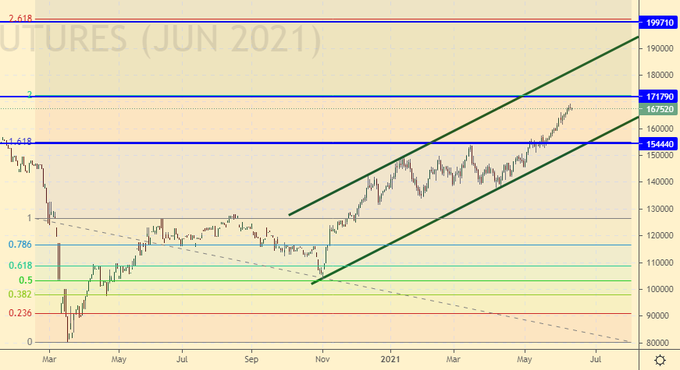