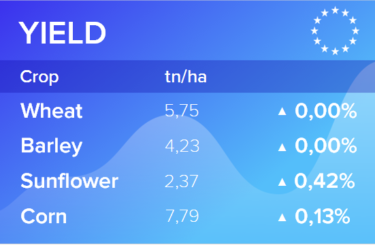 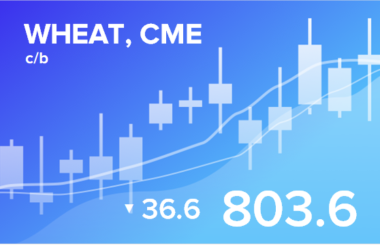 Heavy rains in Australia improved the country’s wheat harvest forecast by 1.8 million tons to 34.4 million tons, which was greeted positively by traders. Wheat prices on the Chicago Stock Exchange tried to go below 780 cents a bushel, but traders greeted the market with active buying, which again brought quotes back above 800.0.

Wheat demand is fueled by large purchases by frightened importers. The same Egypt acquired 600 thousand tons in one fell swoop at a price of around $ 355 per ton. They have strange tenders there, all sellers submit bids in the corridor plus or minus 2 dollars. What precision. What a calculation. Analysts are our envy.

Soybean prices remained around 1200 cents per bushel, which can be explained by the expectation of an increase in demand for oilseeds in the next season, as private entrepreneurs go bankrupt due to restrictions and quickly become poor, we hope that only for a while, but nevertheless less, their consumption structure is changing dramatically. Instead of animal fats, you have to consume vegetable fats. They are still cheaper. High prices for soybeans will prevent fodder crops, such as corn, from dropping. We don’t expect cheap beef on the market.

Warm greetings to all investors and traders!

The United States and other oil importers are assembling their own cartel, which will have to catch up with fear in OPEC +. Everyone is scared, but the miners somehow need to knock money out of the consumers of resources, especially since the US Federal Reserve and the European Central Bank simply drive zeros into the computer, inform the whole world about it, and then present this fraud as real money. «MMM» tickets pop up in my memory.

Judging by how quickly fears about the omicron strain diminish, oil will not be under pressure from the pandemic. It cannot be ruled out that prices will fall to the level of $ 60.00 per barrel of Brent crude, but lower levels are unlikely to be reached, since if this happens OPEC + will certainly reduce the supply on the market. And those who are lucky enough to be born inside the golden billion will have to hope that in a severe frost there will be at least some wind, and this is not a joke. If wind generators stop in winter, London and Paris have a risk of freezing.

Gas prices in Europe continue to remain at $ 1,000 per 1,000 cubic meters, which only supports exorbitant electricity prices. For example, in Britain the price at auction per kilowatt in November reached $ 4.30 per kilowatt, which is 310 rubles in our opinion. And all because there was no wind. Now the price has dropped by half, but this is not very encouraging. At these prices, energy companies should distribute all heating devices free of charge.

The horror is terrible there. We stay at home until next summer.

Russia’s GDP growth in 2021 may reach 5%. This is good information for both the stock market and the ruble. The presence of a positive movement in the economy always creates support for the national currency.

We are expecting an increase in the rate from the Central Bank of the Russian Federation by 1% from Elvira Nabiullina on December 17, this suggests that the dollar will not be able to quickly strengthen against the ruble, since investors will have some interest in Russian bonds.

Moreover, we see active purchases of 30-year US bonds with a near-term yield of 1.7%, which tells us that large investors and banks do not see any prospects for a strong rise in US interest rates.

The dollar shouldn’t count on too much. So, currency traders, in a situation of unrestrained printing of money, wrote him considerable advances, judging by the quotes of the American currency against the euro and against gold.

Over the past week, the difference between long and short positions of managers decreased by 15.2 thousand contracts. The positions of the bulls and bears are almost equal. For the time being, buyers still have an insignificant advantage.

Growth scenario: March futures, the expiration date is March 14. The market held above the level of 780.0. We recommend buying, as prices remained in the growing channel. 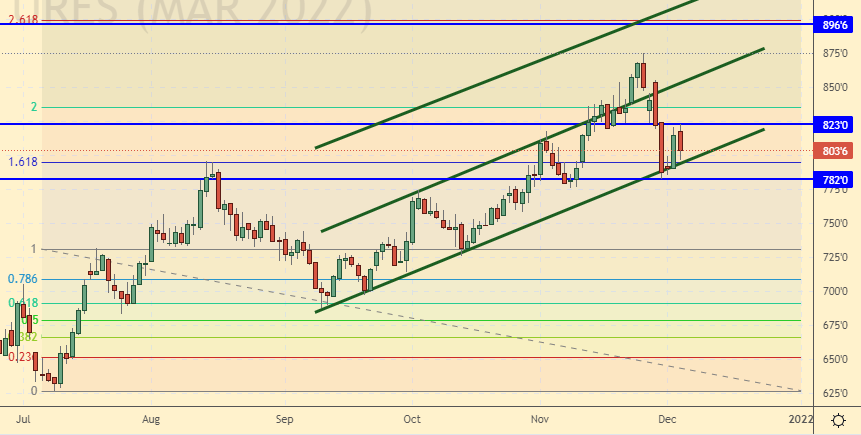 Over the past week, the difference between long and short positions of managers decreased by 58.5 thousand contracts. There are significantly more sellers on the market. The current rise in prices can be used to enter short.

Growth scenario: March futures, the expiration date is March 14. We were knocked out by a stop-order at 570.0. We made a little money, but this is not what we would like to get in the end. Out of the market now.

Falling scenario: when approaching 605.0, you can sell in anticipation of a rollback to 550.0. In addition, current levels are also of interest for short entry. 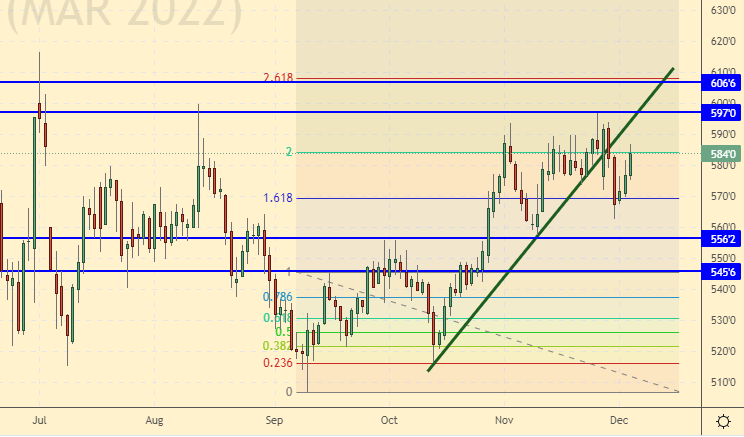 Growth scenario: January futures, the expiration date is January 14. We buy at the current levels. Moving towards 1400.0 is very likely.

Falling scenario: we continue to refuse to sell. Only the 1400.0 area or levels above will be interesting for short entry. 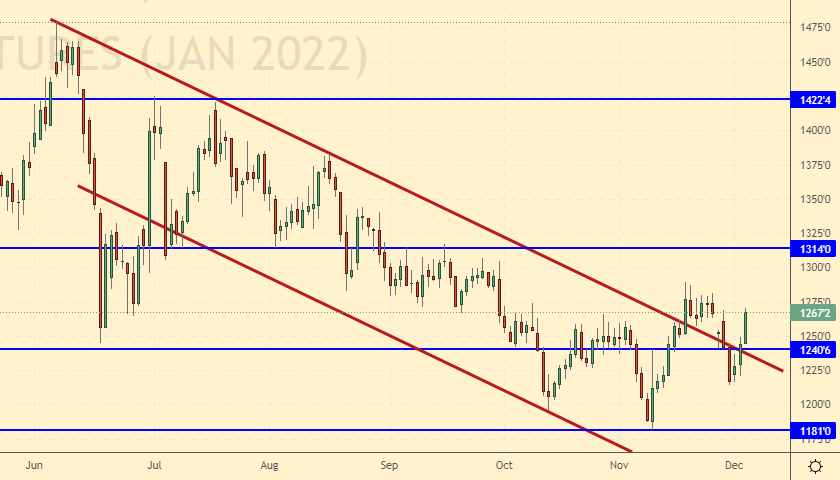 Growth scenario: March futures, the expiration date is February 28. From the point of view of tactics, nothing has changed: we are going to 18.15. When you approach this level, you can buy.

Falling scenario: we continue to hold the short opened two weeks ago. The move to 18.15 is very probable. 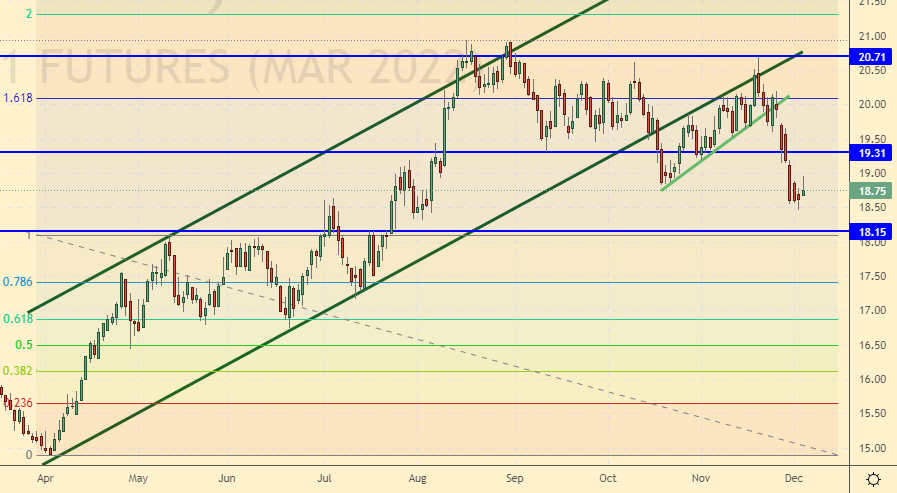 Growth scenario: March futures, the expiration date is March 21. We will not buy here. The prices are too high. All with a profit, they took the movement from 192.00 to 244.00 cents per pound.

Falling scenario: sell. The current rise in prices is an easy provocation. 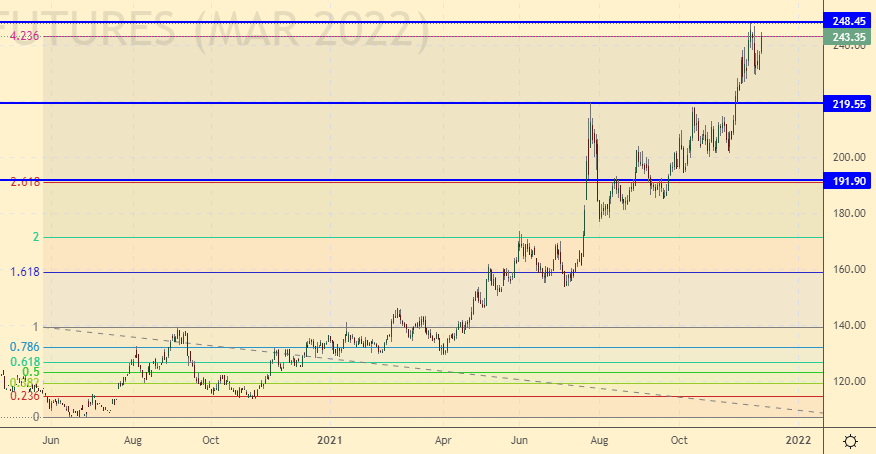 Over the past week, the difference between long and short positions of managers decreased by 54.6 thousand contracts. Oil buyers have ceased to exist. The situation is frankly bearish.

Growth scenario: December futures, expiration date December 31. We will continue to refuse purchases. A good level to enter a long will be the 60.00 level, but only after signs of an upward reversal appear.

Falling scenario: for a good short entry, an up move to the area of 75.00 — 76.00 is needed. Selling from current levels is best done at hourly intervals. 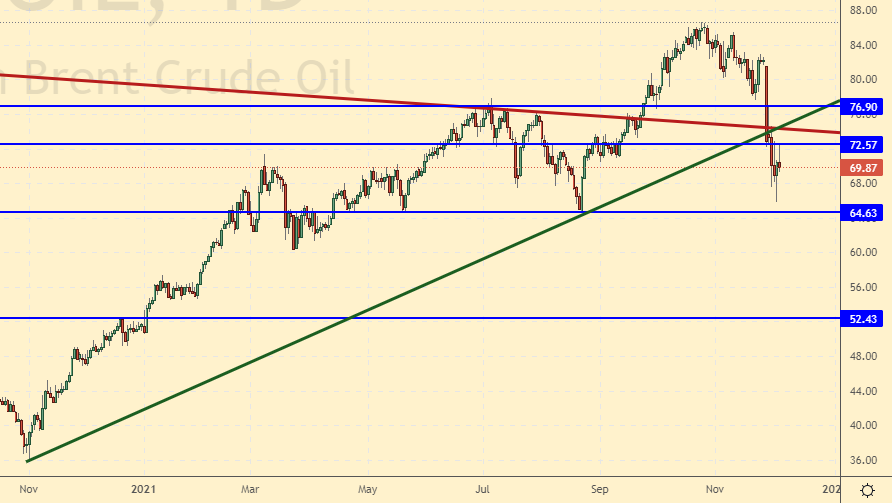 Fundamental US data: the number of active drilling rigs has not changed at 467.

Over the past week, the difference between long and short positions of managers decreased by 34.6 thousand contracts. Buyers, in contrast to trading on the Brent brand, did not get rid of longs so fiercely. Apparently the propaganda that oil will cost sometime there in the future $ 100 per barrel has done its job and some of the buyers still believe in a bright future.

Growth scenario: considering the January futures, the expiration date is December 20. We tolerate, we do not buy. To enter the long, we want the level of 50.00.

Falling scenario: we will sell if the market rises to the area of 73.00 — 74.00. Whoever entered a week ago is still wearing shorts. 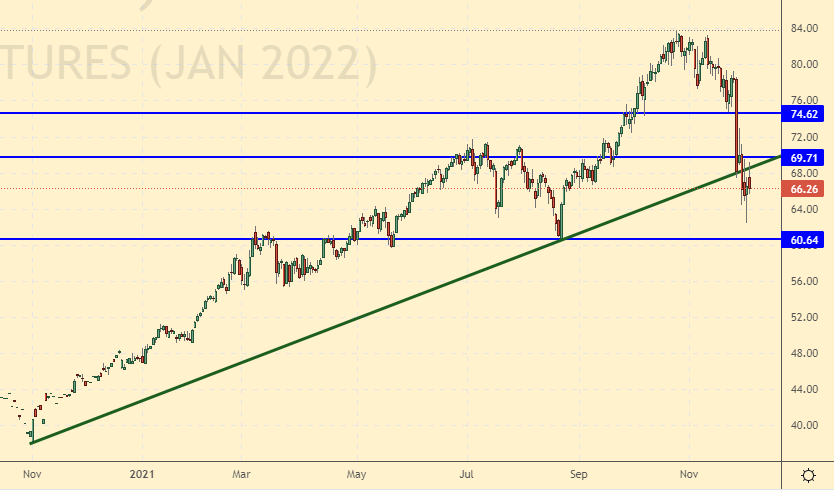 Growth scenario: January futures, the expiration date is January 12. Unlike the oil market, you can buy here. Simply because we have not broken through the support line. 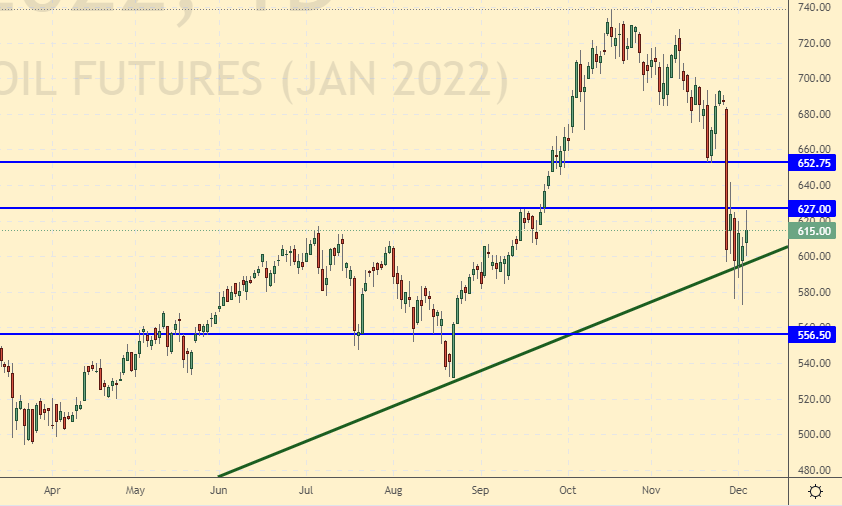 Growth scenario: January futures, expiration date December 29. The Americans have collapsed their natural gas market. We continue to recommend purchases. As long as high gas prices remain in Europe, the US market will receive support.

Falling scenario: everything fell, there is already nowhere to sell. 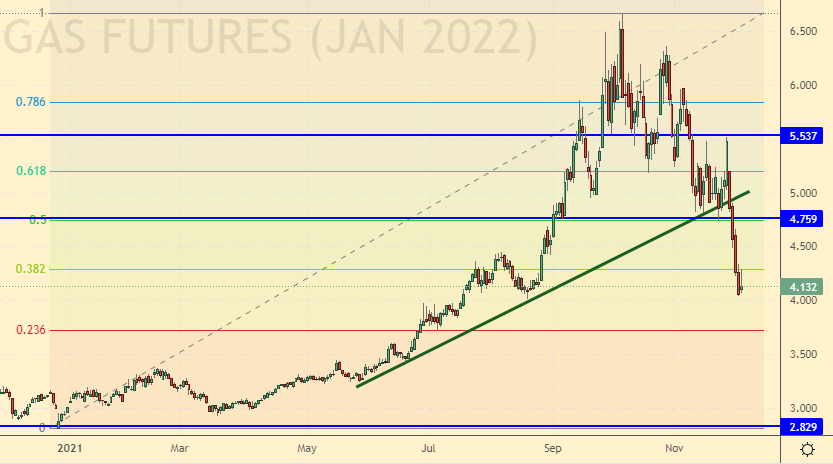 Growth scenario: there are buyers in the market, but so far there are few of them. Let’s support our comrades with our modest capital. Let’s buy.

Falling scenario: selling gold during a period of inflation and zero rates is bad manners. We do not enter the market with shorts. 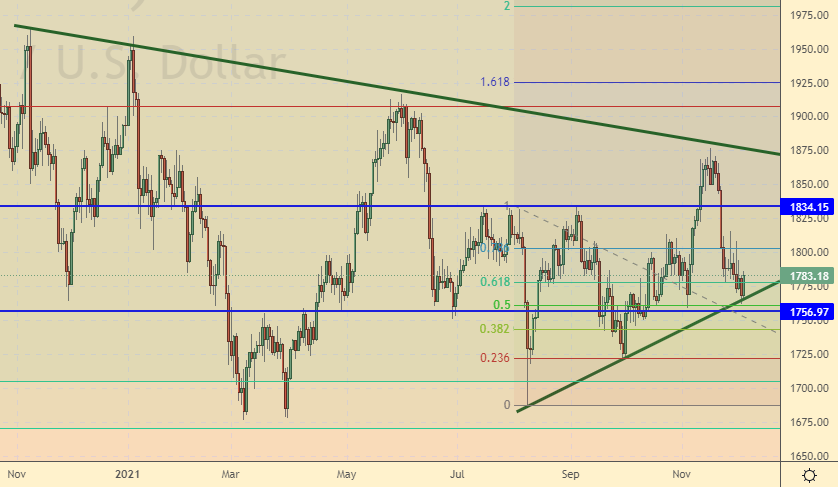 Growth scenario: the euro will most likely hit 1.1050, after which the pair will start to grow. This will happen immediately after the Fed meeting, which according to some signs may become unexpectedly soft. The dollar is unlikely to show us strength and character against the backdrop of a leaky US budget.

Falling scenario: do not sell. We are not interested in a target of a couple of cents, and a stronger fall is unlikely to take place. 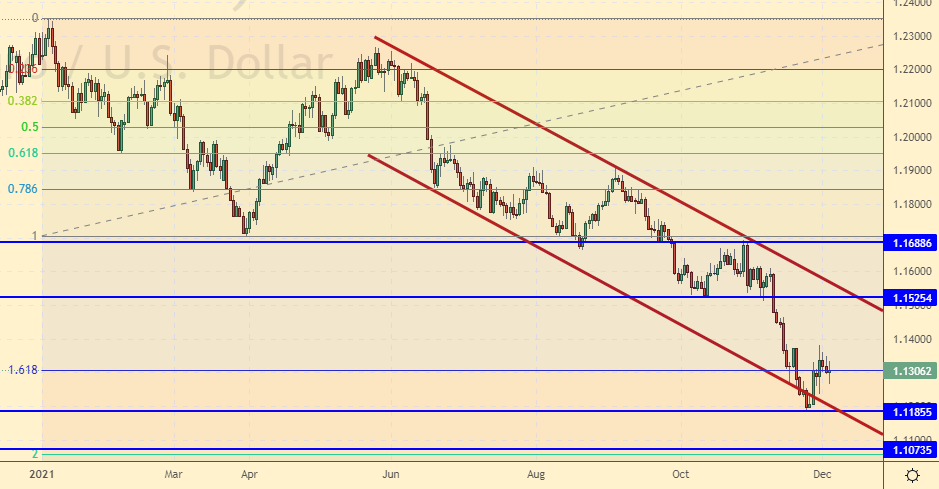 Growth scenario: the pair continues to look at 77.00. In order for the scenario of a move to this level to become irrelevant, it is necessary to go below 71.50, and this will be extremely difficult against the background of falling oil prices. We keep longs.

Falling scenario: for now, we will refrain from selling the dollar, but it cannot be ruled out that after the US Federal Reserve meeting on December 15, the short may become relevant. Recommendations: 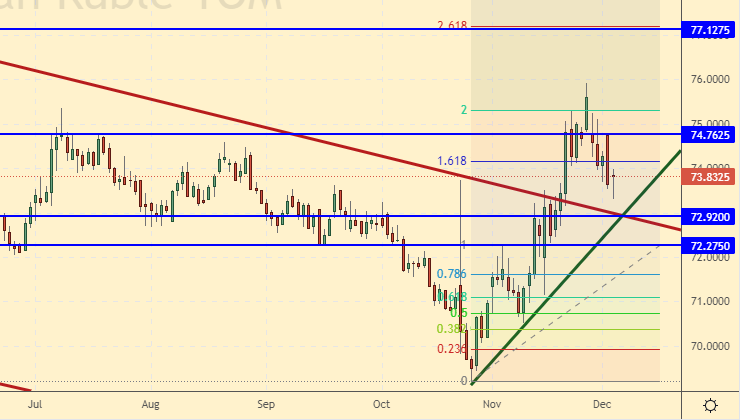 Growth scenario: March futures, the expiration date is March 17. If you enter long, then from 150,000. The current levels are generally not bad, but to enter the purchase here and now I would like to see an increase in optimism on the US stock markets, and there are problems with that. Therefore, while we are watching the market from the outside.

Falling scenario: as in the previous month, we do not open new sell positions, we keep the old ones. Going to 150,000 is what we need. Recommendations: 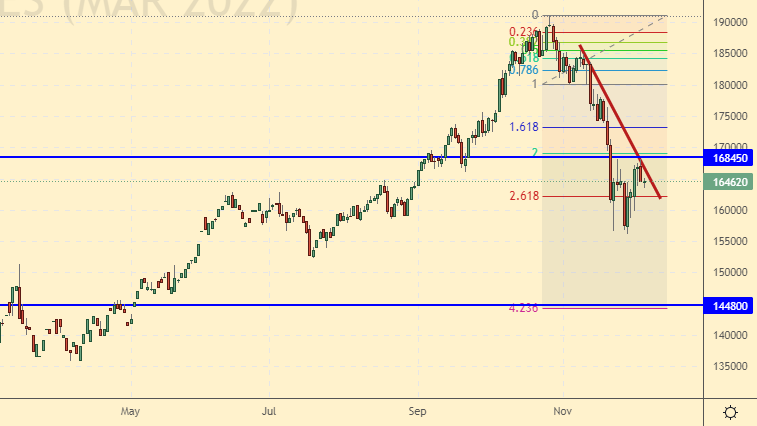