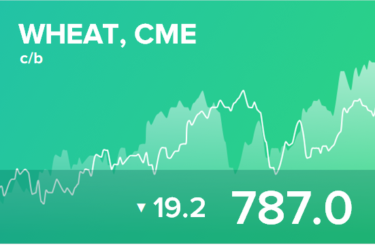 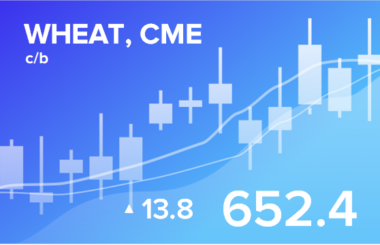 Both wheat and corn continue to be at local highs without giving any serious signs of a downward reversal. It’s more than three weeks before USDA May report for the 21\21 season. During this time, speculators can raise the market a little more, however, the good situation with winter crops will restrain this growth.

Pay attention to the spread between wheat and corn, which is at the level of 70 cents per bushel, which is somewhat narrower than the average 100 cents, which is usually more expensive than corn.

Evaluating the technical picture, we can assume that corn will lose some value next week, while wheat will continue to remain in the current area.

The spring exacerbation between Washington and Moscow, in the form of an exchange of sanctions, is unlikely to have a strong impact on the grain market, provided that logistical significant objects are not affected in the process of confrontation: ports, straits, locks, railway stations.

In almost five years of the release of weekly forecasts, we rarely dig in the dirt, that is, in politics, but the events of the past week are hard to ignore.

After being invited to negotiate, the next day, Biden spat in the face, that is, imposed sanctions, including a ban on buying new issues of the Russian national debt. What a real gentleman!

And now, on the weekend, after the Kremlin’s retaliatory measures, we are already talking about a ban on the purchase of Russian debt securities on the secondary market by American companies, which, if applied, would be an extremely unpleasant step.

And what does oil have to do with it? It cannot be ruled out that a blow to the Russian economy is another tool that can be applied sooner or later, provided that the Kremlin and the White House cannot start normal communication.

In the current situation, a drop in oil prices can be organized at any time, simply by unleashing the horrors of a pandemic in the information field. But on a longer horizon, to keep quotes at a low level, the assistance of the states of the Arabian Peninsula will be required, but there is a problem, they themselves will not last a couple of years with low oil prices. Therefore, we can accept a short-term fall as a working hypothesis, but a long stay quotes below $ 40 per barrel, no.

In theory, the oil market is able to go up from the current levels of the order of 10 — 12%, on the positive from the results of the first quarter, but further ascent is hardly possible without a long-term correction. Thus, even without artificial pressure on prices, by the end of the second quarter, we are likely to get price levels slightly above $ 50 per barrel.

However, a positive development of events will continue to be possible only if relative stability in foreign policy is maintained. In the event of tougher sanctions and a simultaneous fall in oil prices, there will be no need to wait for economic growth by the end of the year.

The ruble is currently in an extremely vulnerable position due to growing tensions between Russia and the United States. The Central Bank will meet on Friday for a meeting. It cannot be ruled out that due to external pressure from Washington, the rate will again be raised by 0.25%, however, while Nabiullina can limit herself to only verbal interventions. Note that the situation has been changing extremely rapidly in recent days. We urge you to keep track of the information background. 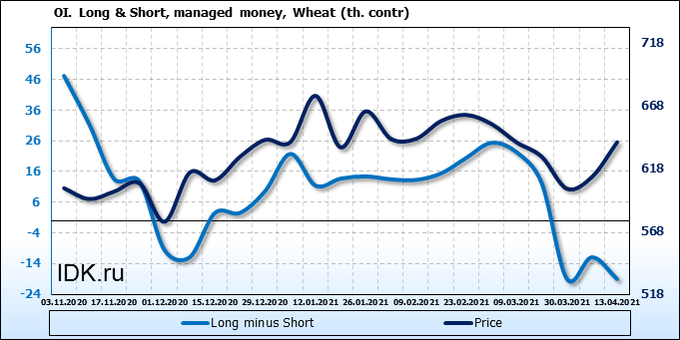 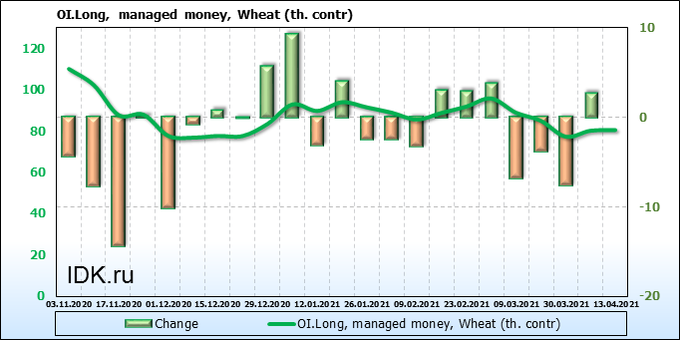 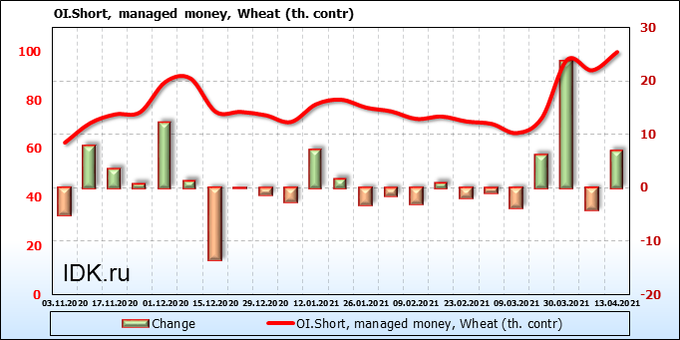 The number of sellers has increased. Despite this, the market continues to rise. If the discrepancy between the open interest and the price persists next week, then after the rise to 692.0 one can expect a sharp drop in prices.

Growth scenario: May futures, expiration date May 14. Our purchases since the beginning of last week have survived. Okay. We will keep. Let’s see what will happen next. Suddenly we went to 800.0.

Falling scenario: we will not sell yet. However, if the market falls below 630.0, you can sell. 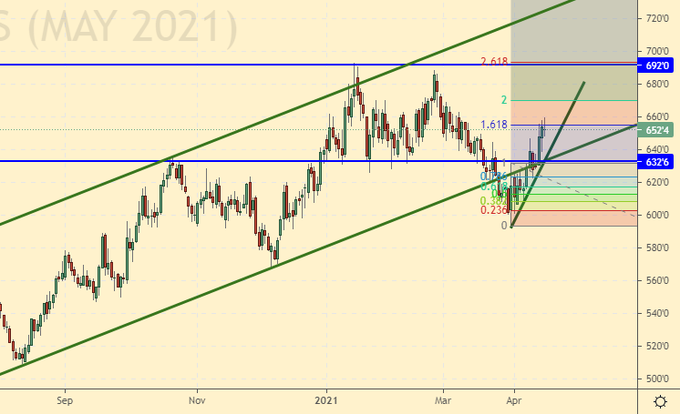 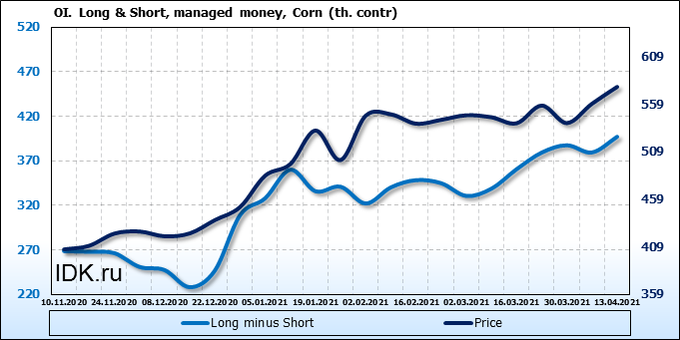 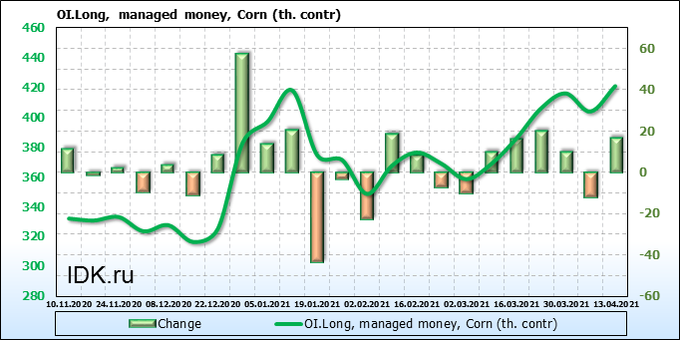 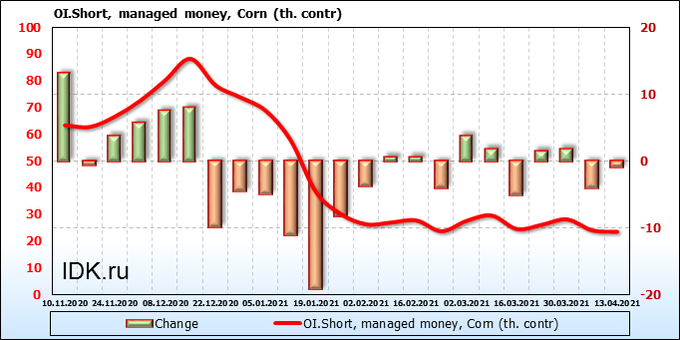 Bulls with a standard volume of 18 thousand contracts entered the market, but we do not see any significant consequences of this entry. Prices have approached a technically strong resistance level and it will not be easy to break above it.

Growth scenario: May futures, expiration date May 14. A pass above 610.0 could lead to a sharp rise in prices. We do not expect this event to happen before July.

Falling scenario: sell here. This is a rare event — reaching the 2.618% Fibonacci level on the daily timeframe. 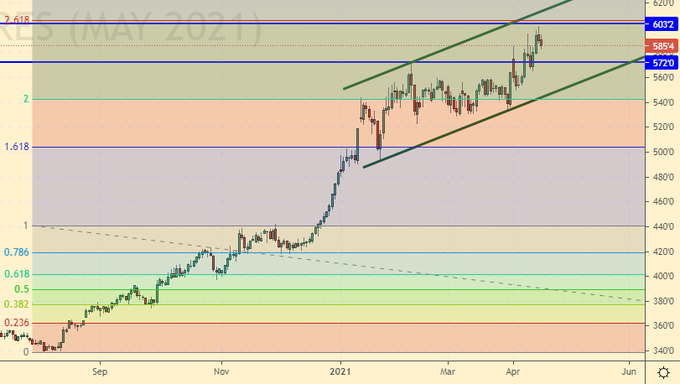 Growth scenario: May futures, expiration date May 14. As before, we believe that it makes sense to buy after the growth above 1470.0. There is a chance that soybeans will reach 1720.0.

Falling scenario: sellers failed. It was not possible to keep the market below 1380. We do not open new positions. 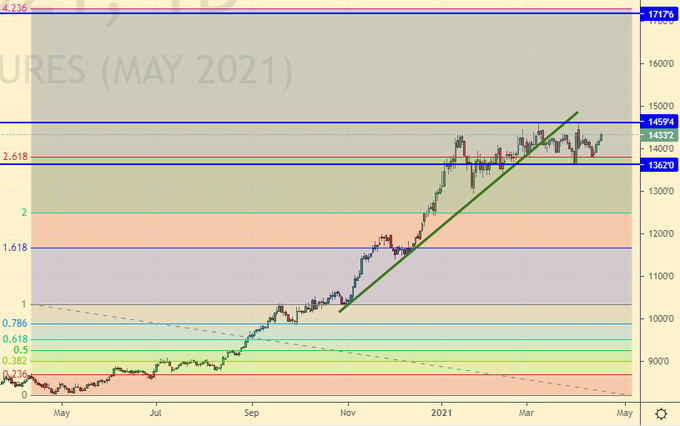 Growth scenario: May futures, the expiration date is April 30. The purchase from 14.60 turned out to be extremely successful in terms of reward / risk ratio. We keep long. We are waiting for arrival at 18.20.

Falling scenario: the short from 18.20 continues to be the main idea. As if the prices of all foodstuffs did not rise simultaneously by another twenty percent. 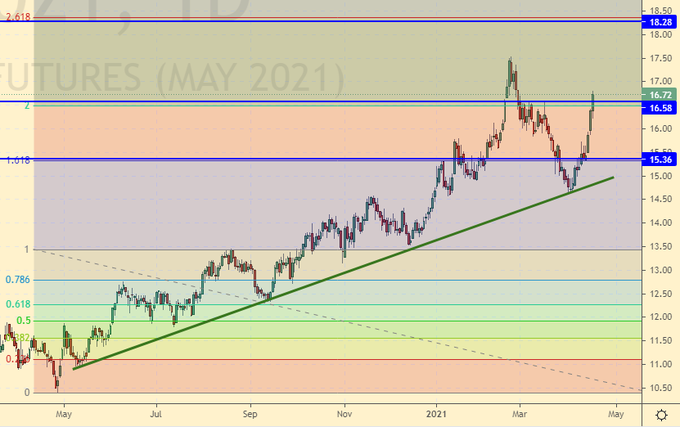 Growth scenario: May futures, the expiration date is May 18. Long is not obvious. Only a return above 135.00 will make us buy.

Falling scenario: the picture is uncertain. The red candle on Friday gives a small chance of falling. 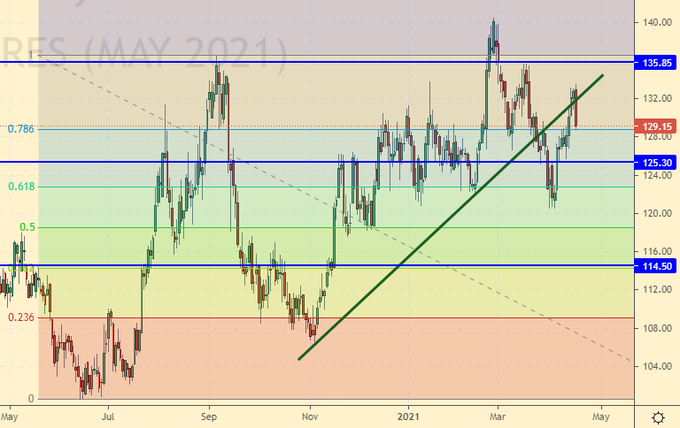 The bulls returned to the market last week. They managed to slightly raise the quotes, but there is no reversal in the market so far, which creates a temptation for sellers to launch another attack. Growth scenario: April futures, the expiration date is April 30. Let’s continue to interpret the current situation in favor of sellers, we don’t buy.

Falling scenario: the situation is very beautiful from the point of view of considering opportunities for entering a short. However, a downward reversal signal is needed. 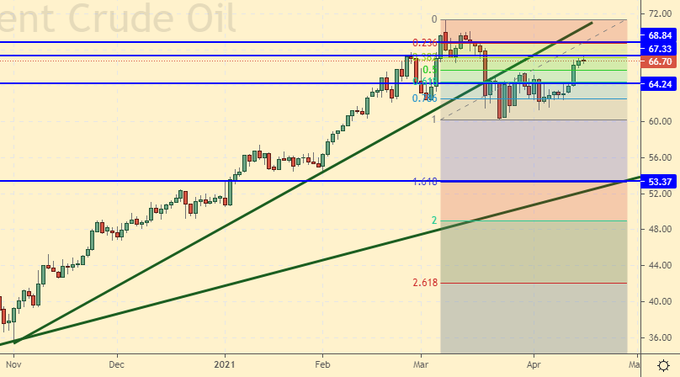 Fundamental US data: the number of active drilling rigs increased by 7 to 344. 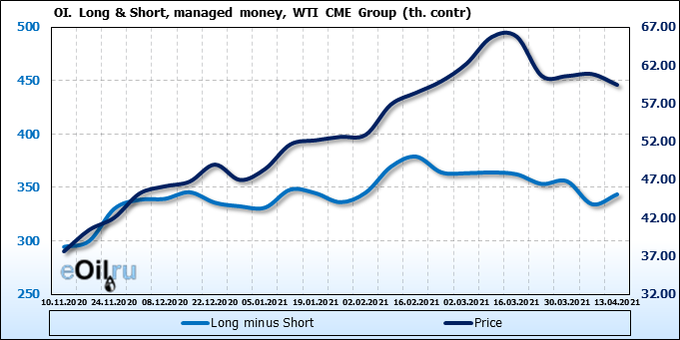 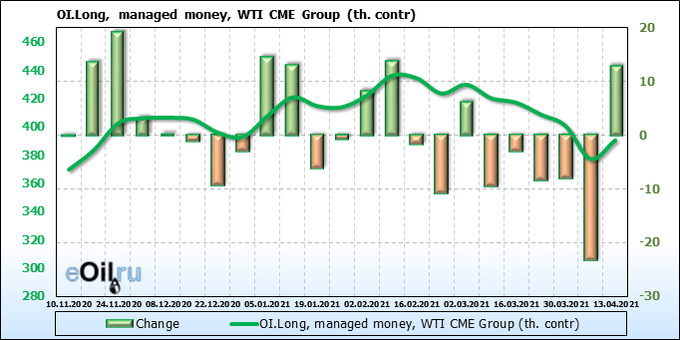 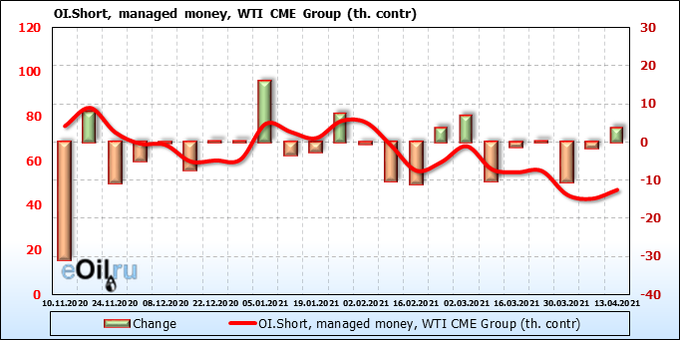 The buyers are back. The attack went up with the intention to break next week stop-orders above 68.00 and go to 71.80. But there are a handful of brave men who oppose these plans. We note a technically interesting situation for the short.

Growth scenario: June futures, expiration date May 20. In case of growth above 65.00, you can buy at 1H intervals with targets at 71.80. We do not recommend making purchases on daily intervals.

Falling scenario: «you can sell with a breakthrough to 64.00» we wrote a week earlier. We will amend this recommendation. Need a red day down with a candle body of at least 80 cents. Until he is gone, we are not selling. 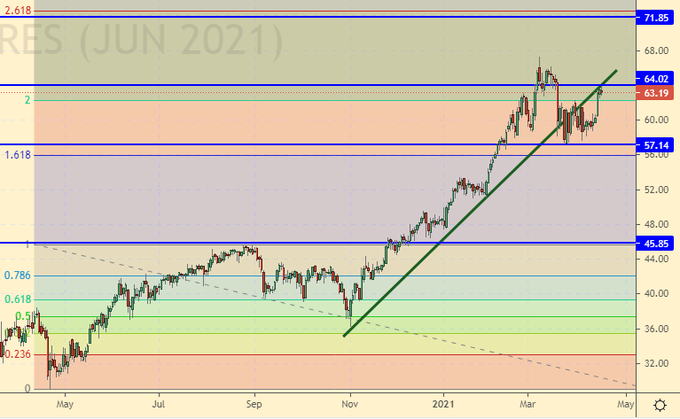 Growth scenario: May futures, the expiration date is May 12. We continue to wait for the market to fall. We do not buy.

Falling scenario: sell here. Let’s note an almost ideal situation for a short. Downward impulse and completed correction to it. 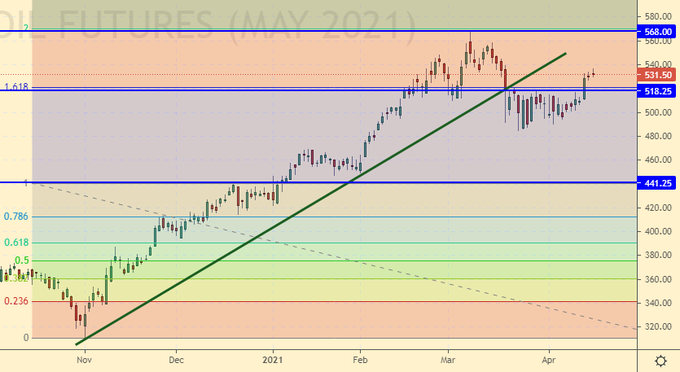 Growth scenario: May futures, expiration date April 28. We will keep the longs opened earlier. Europe should ensure good gas demand this summer. They are afraid of winter. «Game of Thrones» is proof of this. 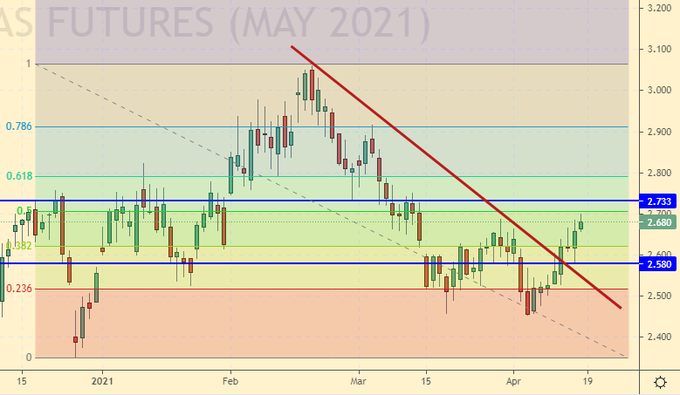 Growth scenario: «We will buy only after the day closes above 1760», we wrote a week earlier. The event has come. You must be in longs. We keep it.

Falling scenario: it’s better to leave the shorts here. It is possible that psychoses in Washington are caused by some setbacks, about which we do not know anything. 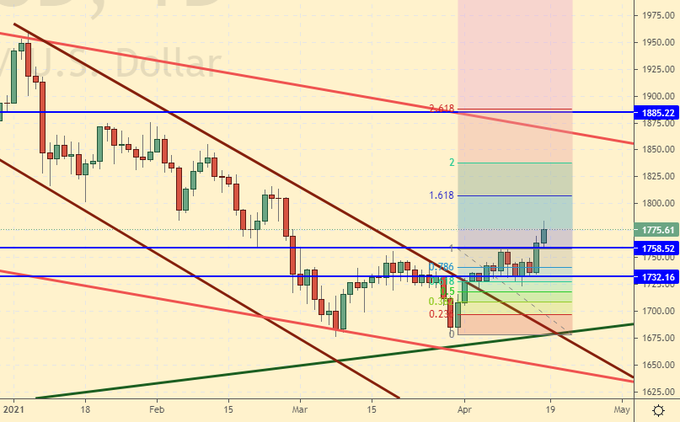 Falling scenario: the growth of the pair amid the raging pandemic in Europe can only be explained by the loss of confidence in the dollar. No matter how much the Chinese comrades had a hand in this question. In the meantime, you can sell after the appearance of the red candlestick down. 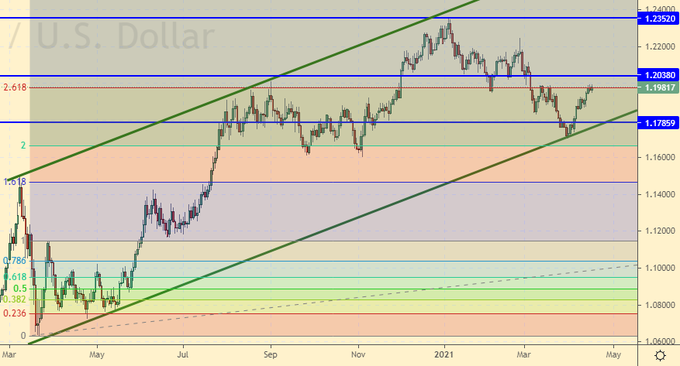 Growth scenario: last week the ruble experienced both the love of the inexperienced investment masses, and shock, and awe, and it looks like the intervention of the Central Bank, which took place after the announcement of the introduction of new sanctions by the United States. Conflicting with an economy that can print Russia’s annual GDP in its currency and the rest of the world accepts is not the best thing to do. We buy a dollar.

Falling scenario: hardly any of the speculators will bet on the strengthening of the ruble in the current situation. It is necessary for Biden to calm down, but this is not happening yet. We do not consider a dollar short as a working idea. 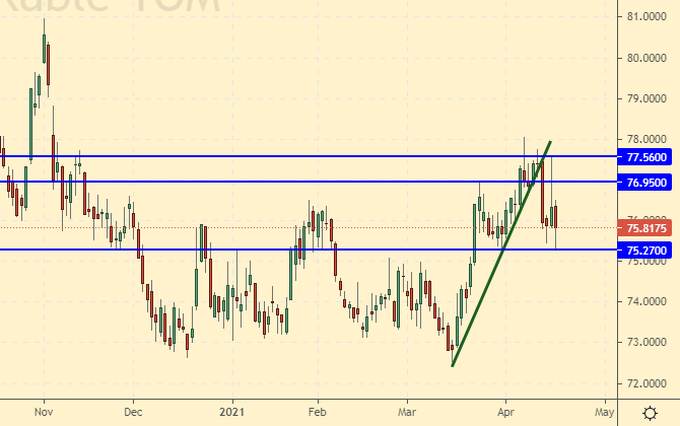 Growth Scenario: too much negative stuff from Washington. In addition, the US stock market is ripe for a full fall. Among other things, Bitcoin fell. Except for oil prices, the background is negative, we will not buy.

Falling scenario: if Moscow does not take a step back in its confrontation with the American Democrats, of course, provided that such a step can still be taken, and continues a tough exchange of blows, then sooner or later the economy will begin to suffer. In the current circumstances, we do not believe in the growth of the stock market. 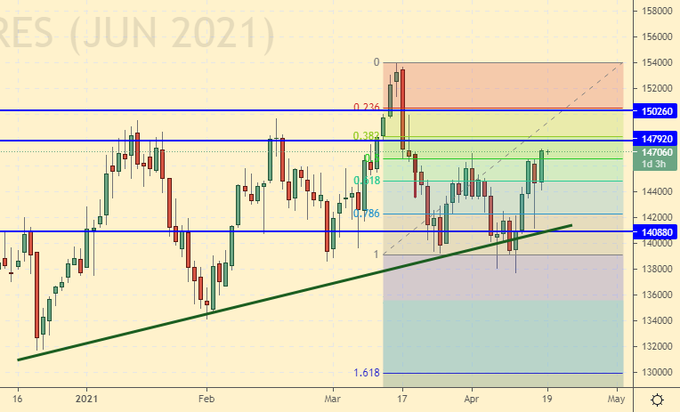