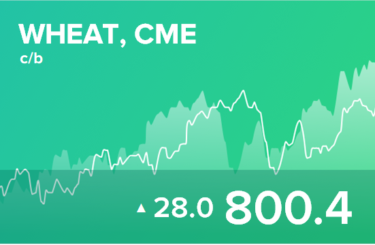 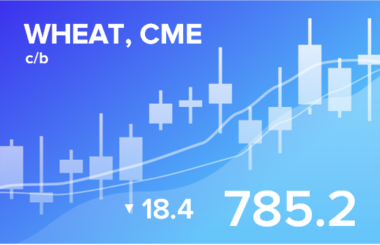 USDA’s December crop report was upbeat. The forecast for the gross harvest of both wheat and corn increased by 0.34%. After the release of the data, corn remained in place, while wheat fell slightly. If the dollar index continues to strengthen after the US Federal Reserve meeting on the 15th, the grain market may undergo a short-term sale, but there will be no downward trend reversal, as importers continue to build up grain stocks. Egypt can already feed itself for 5 months, China 1.5 years. This information so far influences the minds and supports the bull market, but if the next year is not bad, then importers can count on falling prices, including due to the deeper reserves being created now.

The pandemic showed the authorities of a number of states how vulnerable they are in the event of a supply interruption. It is possible that in the future the grain market will become not as thin and volatile as it is now, precisely because of the growing volumes of strategic storage facilities.

Therefore we will not fear the sale by the Americans of 18 million tons of oil on December 17th. May the OPEC be with you.

Next week we have a Fed meeting, which may affect the dollar directly and indirectly on the commodity markets. If Powell says on Wednesday that the pace of reduction of the quantitative easing program will accelerate, this will lead to further strengthening of the dollar. However, the strengthening of the position of the American currency will be restrained, since everyone is well aware that inflation will not only gut the wallets and savings of citizens, but also in relative terms reduces the US debt, which is incredibly convenient. This means that the Fed will not rush to raise the rate, no matter how much those who pray every night in front of the monitor on the American labor market would like it.

Gas in Europe again costs $ 1,200 per 1,000 cubic meters. It is possible that already in January the Europeans will have to choose between the operation of factories and heating their houses, since there will not be enough gas for everyone before the arrival of heat. In such a situation, oil prices cannot fall much, no matter how much Washington sells its black goods from its reserves.

All who can, will drown with oil and its derivatives. In the current situation, we can assume a short-term decline in prices to the level of $ 60.00 per barrel of Brent oil. A stronger fall is unlikely to be possible.

On Friday we have a meeting of the Central Bank of the Russian Federation. In November, inflation in the country amounted to 8.4% in November. We expect the rate from Nabiullina to rise by 1% to 8.5%. So far, the dollar still has a slight advantage against the ruble, but one cannot deny the possibility of strengthening the national currency until the end of December and then throughout January, since the likelihood of Powell’s weak speech on Wednesday is quite high. If the Fed wanted to raise the dollar rate as part of the fight against inflation, it would have done so a few months ago.

Our references to terms such as «transitory inflation» and «weak labor market» look just like a bad disguise for an unwillingness to raise rates. If the value of money rises, a number of American companies will not be able to survive the debt burden. A wave of bankruptcies and an increase in unemployment may begin.

It is scary to launch the market mechanisms at full capacity, as the result will be an aggravation of social problems, and Mr. Biden’s rating will fall below the current already terrible level of 36%. That is why the ruble has chances for a stable future in the range of 70.00 -75.00 at least until the end of January.

Over the past week, the difference between long and short positions of managers increased by 6 thousand contracts. There are more buyers in the market only due to the outflow of sellers.

Growth scenario: March futures, the expiration date is March 14. The market could not hold above the level of 780.0, which led to a move down to 770.0. We are not buying yet.

Falling scenario: we saw a fall below 780.0. You can enter the market with a target at 735.0. Not the best spot for a short, but with risk control, the deal is acceptable. 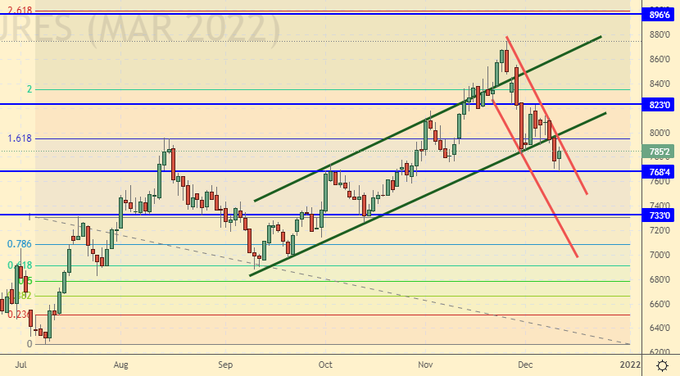 Over the past week, the difference between long and short positions of managers increased by 17.4 thousand contracts. Buyers are in control of the situation. For now, the crowd wants to see further growth in the market.

Growth scenario: March futures, the expiration date is March 14. It is unlikely that we will rise above 610.0. There is no good place to shop. Out of the market.

Falling scenario: we continue to believe that when approaching 605.0, one can sell in anticipation of a rollback to 550.0. The current levels are also of interest for short entry. 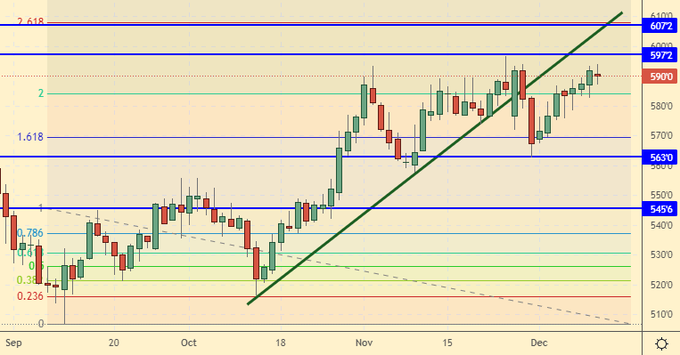 Growth scenario: January futures, the expiration date is January 14. We continue to recommend buying at current levels. The move to 1354 (1462) is highly probable.

Falling scenario: we continue to refuse to sell. We are waiting for the rise in prices. 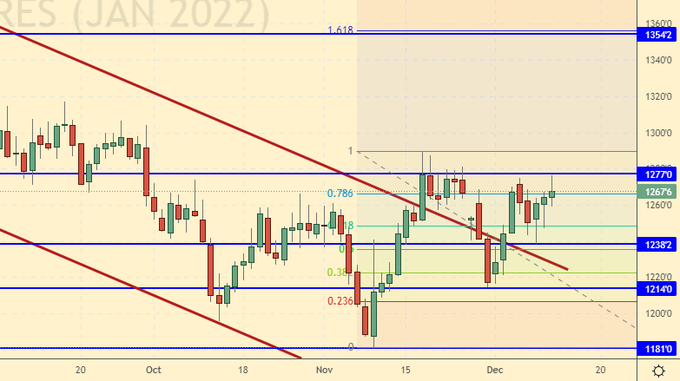 Growth scenario: March futures, the expiration date is February 28. We see an aggressive flight up, which did not simplify the situation in any way. Whoever did not buy, like us, is out of the market. Falling scenario: a sharp splash beckons to short. Sell carefully. 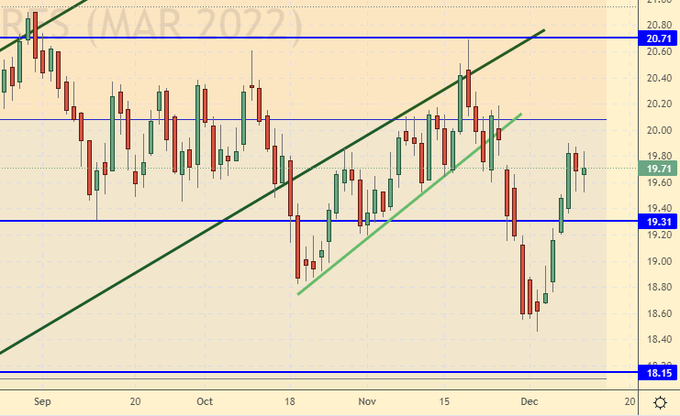 Growth scenario: March futures, the expiration date is March 21. For a new round of purchases, we need to drop to the area of 200.0. Out of the market so far.

Falling scenario: it’s good that we set our stop high. As you can see, the puppeteers tried to knock us, and not only us, out of the shorts. We keep short positions. 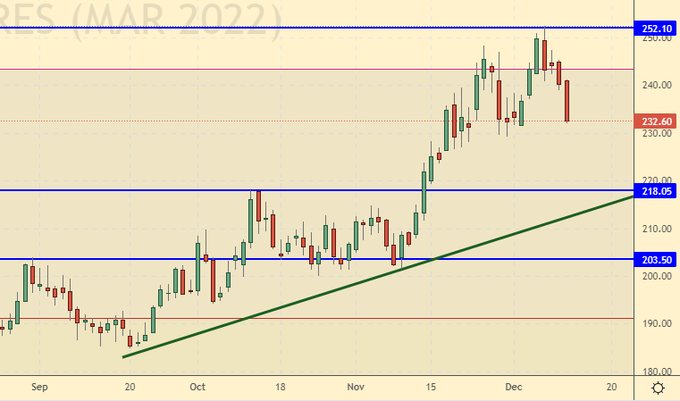 Over the past week, 12/01/21 — 12/07/21, the difference between long and short positions of managers decreased by 5.3 thousand contracts. At the same time, speculators left the market. Bulls, stronger than bears, have reduced their positions. Growth scenario: December futures, expiration date December 31. There are slight hints of growth, but we will continue to refrain from shopping. I would like to see the 60.00 level.

Falling scenario: the current area is not bad for a short entry. However, one cannot deny the price movement towards 80.00. 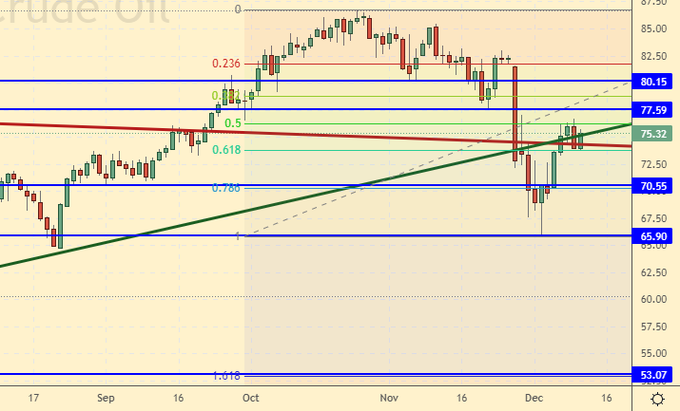 Fundamental US data: the number of active drilling rigs increased by 4 units and is 471 units.

Over the past week, the difference between long and short positions of managers decreased by 7.2 thousand contracts. Bulls left the market, bears, on the contrary, increased their positions. Changes in the balance of power can be considered insignificant.

Growth scenario: January futures, the expiration date is December 20. Looking at the rebound from 62.50, I would like to buy, but we consider the current levels to be overestimated. Out of the market.

Falling scenario: current prices, as well as a rise to 76.70, are acceptable for sales. Note that in anticipation of the market falling by 50.00, the rise of quotations above 78.00 is undesirable. Recommendation: 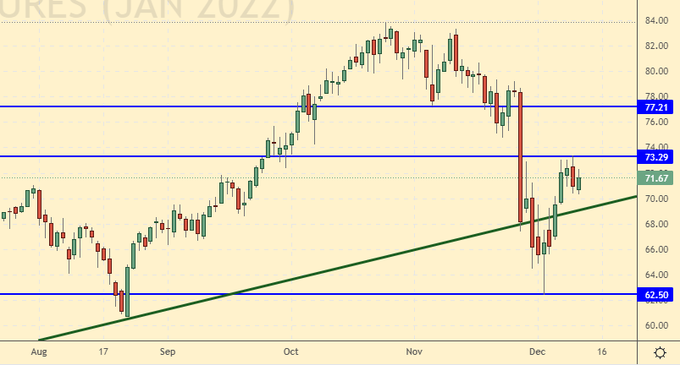 Growth scenario: January futures, the expiration date is January 12. A rise above 660.00 may lead to a move towards the 700.00 area. We keep longs.

Falling scenario: sell here. Gasoline stocks in the US are growing, this fact may put pressure on prices. 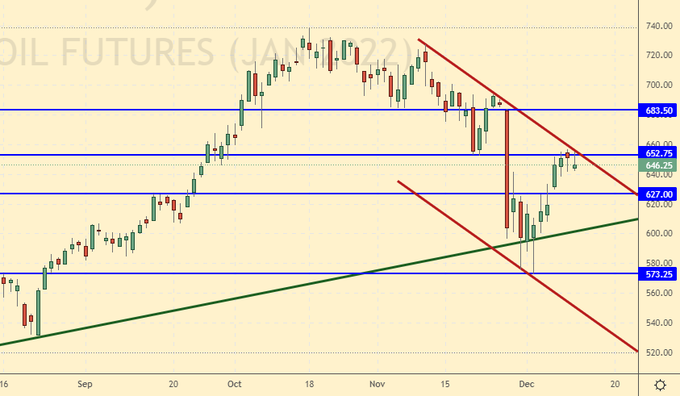 Growth scenario: January futures, expiration date December 29. A strange fall against the backdrop of problems in Europe. Those interested can buy. We keep open purchases from 3.750.

Falling scenario: we will not sell. The market situation is abnormal. 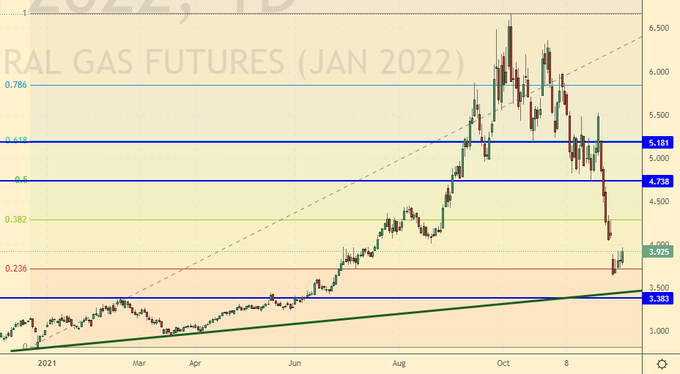 Growth scenario: frankly looking forward to the Fed meeting. The Friday candle does not instill confidence that we must necessarily grow. We keep the longs opened earlier. We do not increase the position.

Falling scenario: shorting gold is only possible after Powell’s comment on Wednesday. We recommend staying out of the market due to uncertainty. Recommendations: 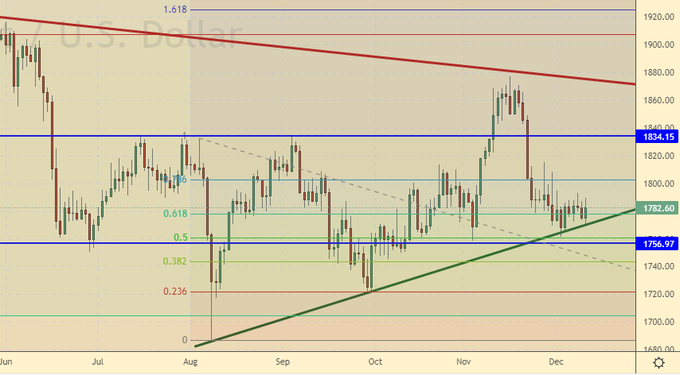 Growth scenario: the euro has a chance to start growing against the dollar, provided that inflation in Europe picks up speed due to the rise in energy prices. You can buy here.

Falling scenario: do not sell. We have very big doubts about the strength of the dollar. Those interested can work out a possible move to 1.1070 at hourly intervals. 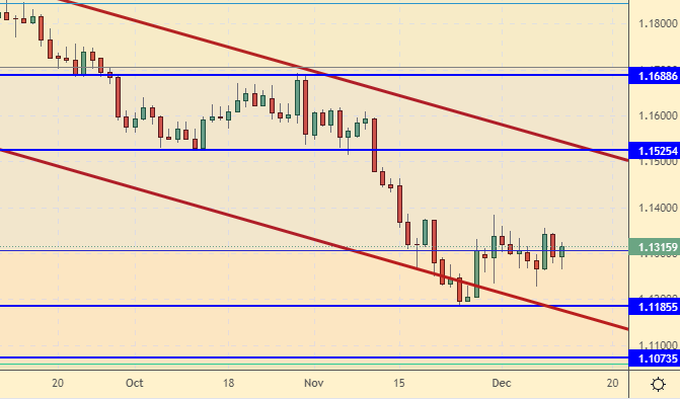 Growth scenario: falling of the pair to 72.30 is very likely. When approaching this level, you can buy, provided that the dollar does not show weakness against the currencies of developed countries after the Fed meeting.

Falling scenario: if the pair goes below the level of 72.00, we will think about shorts. There are too many unknowns in the equation right now. It is possible that everything will become more or less clear only on Friday, after the meeting of the CBR. 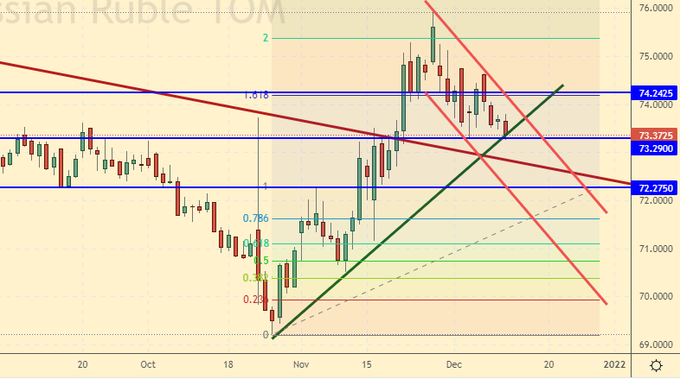 Growth scenario: the stock market falls, because at high rates, it is much safer to keep money on a deposit in a bank, and not to own equity securities. In light of the expected rate hike by the Bank of Russia on Friday, we do not recommend index longs.

Falling scenario: as well as five weeks earlier, we do not open new sell positions, we keep the old ones. We are waiting for the 150,000 mark. 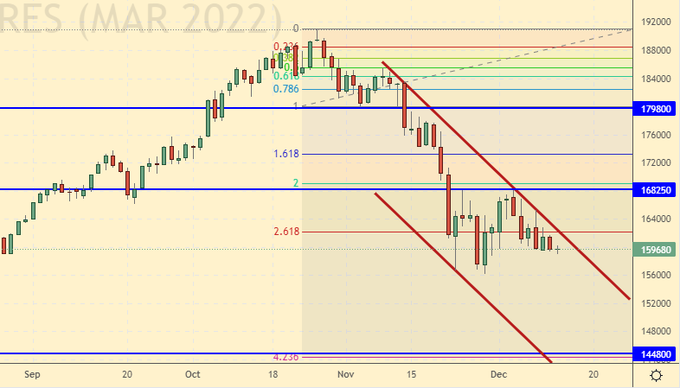