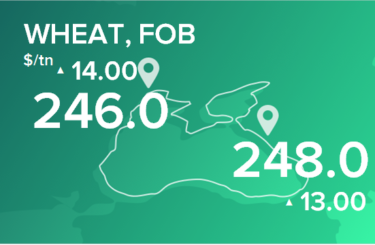 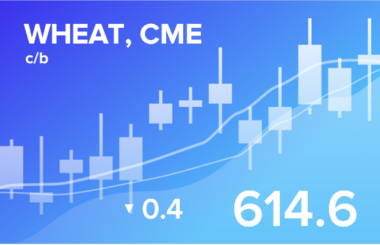 On Monday we are waiting for the release of the next report from the USDA. Judging by the quotes, the market does not expect a significant deterioration in the situation. Prices are going down. The main reason for the fall is a decrease in the volume of purchases of wheat and corn from China to the United States due to the approach of its own harvest and falling prices on the local market.

Good weather in America’s farming belt and the expectation of Ukraine’s largest harvest ever eased global supply concerns and drove prices down.

According to forecasts of the Ministry of Agriculture, the harvest in Russia may amount to 127.4 million tons of cereals and legumes, including about 81 million tons of wheat.

The nervous tension remains in the oil market due to the uncertainty of the OPEC + talks. The situation is such that while the exporting countries do not increase their production and are waiting for how the UAE will ultimately behave. If a demarche is undertaken and an exit from the deal is made, this may serve as a signal for other countries to extract and sell as much as possible. So far, the world’s storages are emptying by about 1 — 1.5 million barrels a day, as demand exceeds supply, and the awareness of this fact supports prices.

The situation with Iran is also far from certain. If in June it seemed that the parties were about to put their signatures on the nuclear deal, now a new round of bargaining and bickering has begun. On July 6, Iran notified the International Atomic Energy Agency (IAEA) of a plan to produce uranium metal with an enrichment level of up to 20% for use as reactor fuel.

It is unlikely that the use of centrifuges in any form will please in the US It is possible that the negotiations will now come to a standstill again. This uncertainty will also play into the hands of buyers.

For sellers at this stage, only technical overbought and an increase in oil production in the United States by 200 thousand barrels per day to 11.3 million barrels. Judging by the increase in the number of drilling rigs, we can talk about a further increase in production, which should somewhat cool the fervor of the bulls.

Despite the fact that on July 23, with a probability close to 100 percent, Nabiullina will raise the rate, the ruble is in no hurry to strengthen, demonstrating a much stronger dependence on oil prices, which fell slightly last week than on expectations of a rise in interest rates.

The problem with the increase in the number of cases of the Chinese virus in Russia has not yet disappeared. The worsening epidemiological situation will lead to an increase in health care costs. This puts pressure on the ruble and adds to the nervousness.

On the other hand, we cannot yet talk about the strength of the dollar, as its strengthening against precious metals and the euro has stopped. This means that all the current problems of the ruble are in its weakness, and not in the strength of the American currency.

Over the past week, the difference between long and short positions of managers has turned negative. There are more sellers-speculators on the market. The bulls were actively closing their positions.

Growth scenario: September futures, expiration date September 14. The market after the Independence Day in the United States opened with a gap down on the news of a reduction in Chinese food purchases in America. A fall to 570.0 cannot be ruled out. You can buy there.

Falling scenario: here it is worth keeping shorts that were open from the 635.0 area. We may well fall to 570.0 amid the release of the USDA report on Monday. 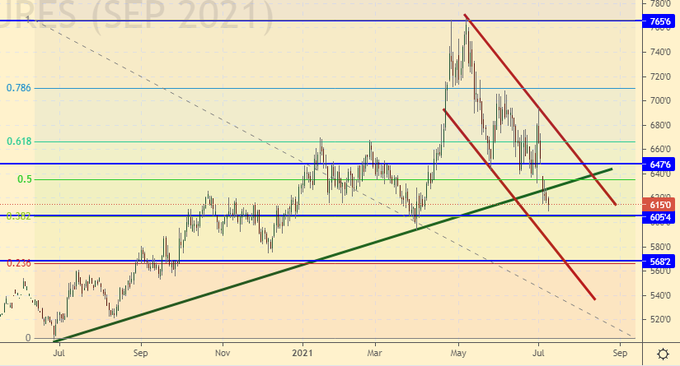 Over the past week, the difference between long and short positions of managers decreased by 21.1 thousand contracts. At the same time, the price fell 44.4 cents. Sellers actively entered the market. Growth scenario: September futures, expiration date September 14. Long-term support line under threat of break. We will refrain from shopping.

Falling scenario: it makes sense to wait for the release of the USDA report. If the market falls below 520.0, you can sell, but the prospects for a fall do not look good, so we will not recommend this deal. 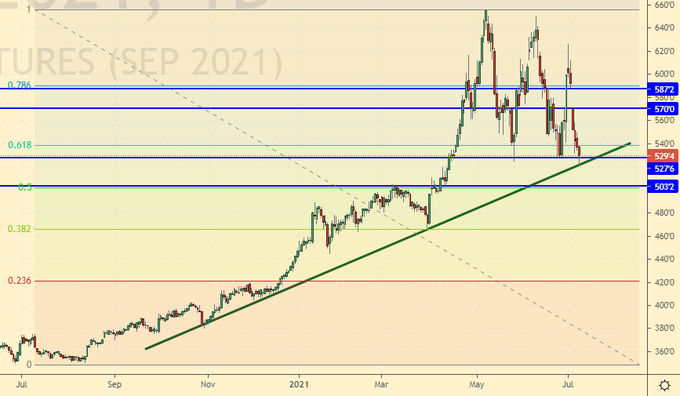 Growth scenario: September futures, expiration date September 14. The market is able to go down to the 1100 area. Until this level is reached, we do not buy.

Falling scenario: our persistence with shorts is paying off. We remain in the position, tightening the stop order. 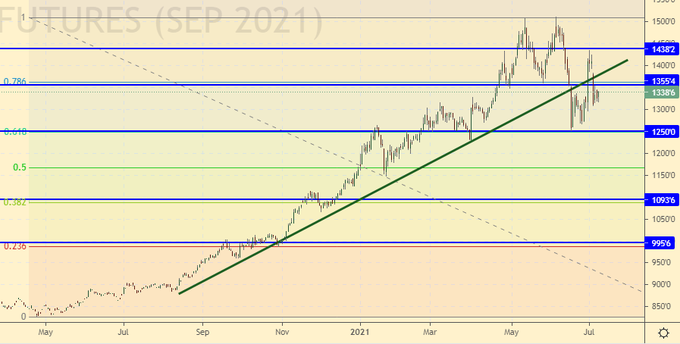 Growth scenario: October futures, the expiration date is September 30. The current pullback is unpleasant for the bulls, but the chances of growth remain, so we will buy at current prices.

Falling scenario: our plans haven’t changed since last week. From 19.50 we will definitely sell. Second option: we will enter short after falling below 17.00. 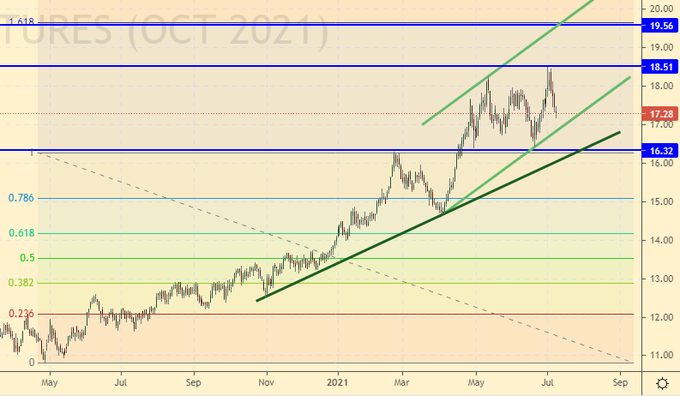 Growth scenario: September futures, the expiration date is September 20. You can buy here and up to 138.0 with claims to reach the mark of 194.0.

Falling scenario: the market is unlikely to crash. But the move to 120.00 cannot be ruled out. We will keep the short opened earlier. Recommendation: 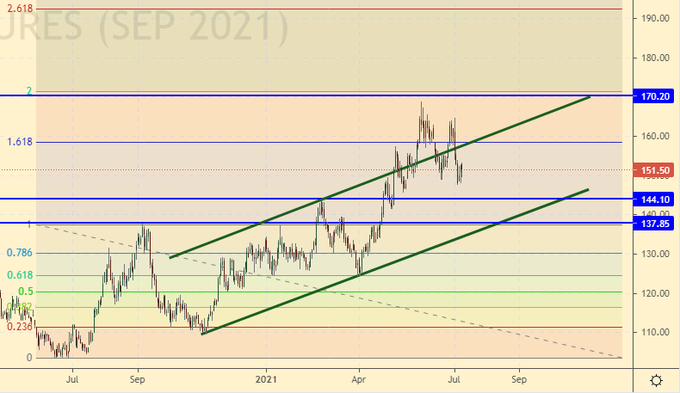 Within a week, the difference between long and short positions of managers decreased by 3 thousand contracts. We see an insignificant outflow of money from the market, moreover, buyers withdraw money in large volumes.

Growth scenario: July futures, expiration date July 30. If the market pulls back to 69.00, then it is worth considering buying opportunities, provided the news background is neutral.

Falling scenario: the market sank slightly over the week, indicating a tendency for a correction. You can sell here. 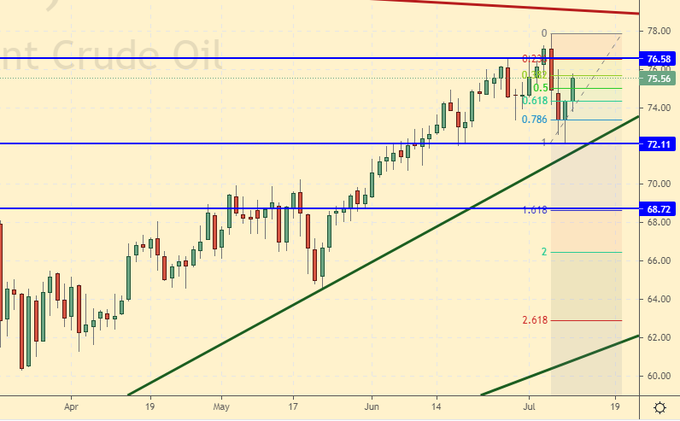 Fundamental US data: the number of active drilling rigs increased by 2 units and is 378 units.

Over the past week, the difference between long and short positions of managers decreased by 30.2 thousand contracts. At the same time, the price increased by $ 1.15. Buyers are actively leaving the market, which creates preconditions for the continuation of the fall.

Growth scenario: August futures, the expiration date is July 20. We continue to remain out of the market. In case of a fall to 67.50, one can think about buying.

Falling scenario: the market is charged to continue falling. We will sell from the current levels. The target of the movement is at 67.50, a deeper fall is possible, provided that there is news from OPEC + on an increase in production. 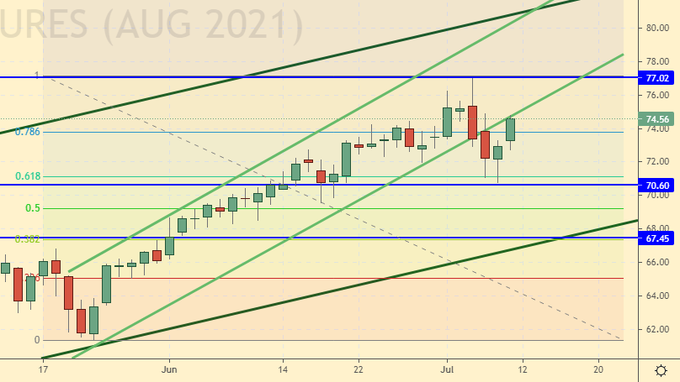 Growth scenario: August futures, the expiration date is August 12th. It is very likely that the market will break down the support line. Mid summer. The demand for fuel is high, but it is already in price. Out of the market.

Falling scenario: we continue to wait for the support breakout. The position from the technical point of view on the short is not bad, as the market has been growing for a long time in a relatively narrow price channel. 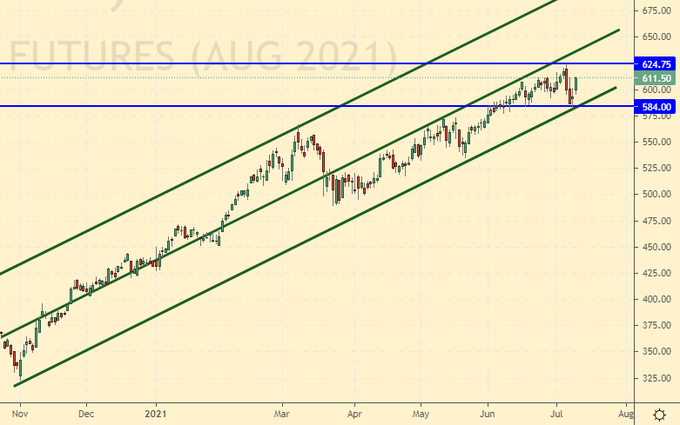 Growth scenario: August futures, expiration date July 28. «We see the «high waves» reversal candlestick formation. The movement to 4.14 will most likely be postponed for some time, » we wrote a week earlier. Indeed, growth has stalled. We are waiting for a rollback to 3.400.

Falling scenario: for now, let’s not rush into shorts. In case of the expansion of the «green» trend in the world, the demand for gas will only grow. Recommendation: 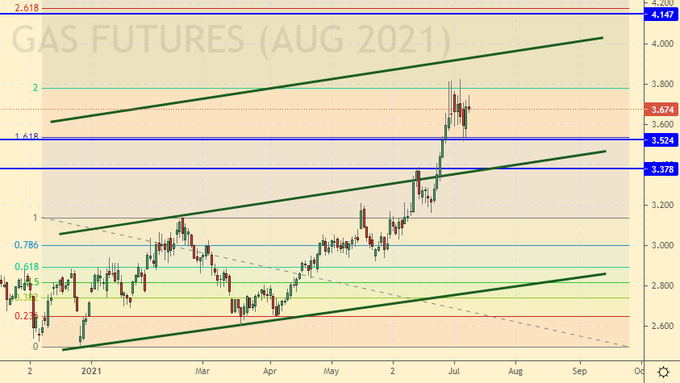 Growth scenario: you can buy here in the medium term. From 1735 can be added. The market does not yet believe in the strength of the dollar. In case of growth above 1815, it can be added to the previously opened longs.

Falling scenario: after rising to the level of 1850 and a rollback from it downward, you can sell. There are no other interesting ideas for a short on the market at the moment. 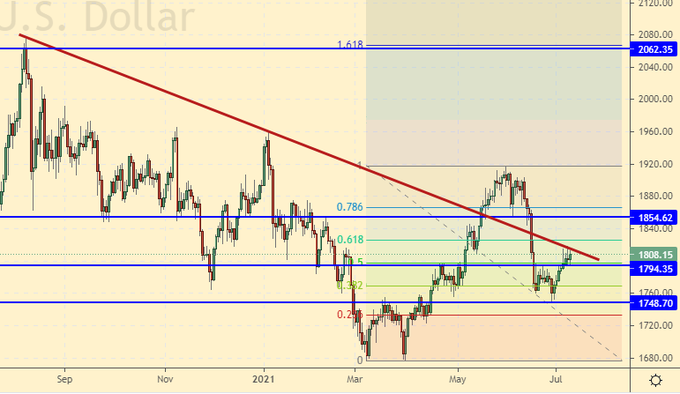 Growth scenario: no changes in the market. We will buy only after the growth above 1.2100. In the current situation, sellers have an advantage, as prices went down from the growing channel.

Falling scenario: keep short. The move to 1.1050 will be possible if the crowd believes in the strengthening of the Fed’s rhetoric on July 28th. Recommendations: 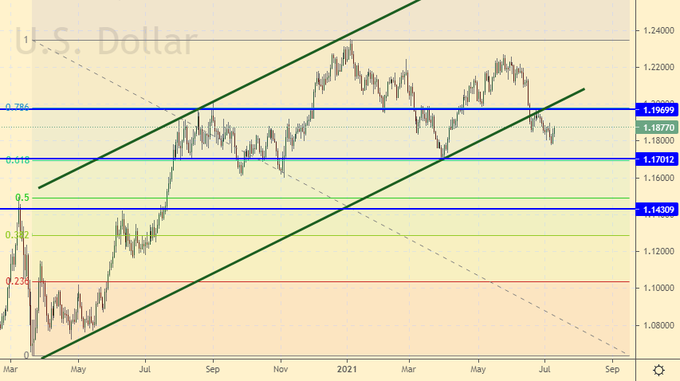 Growth scenario: ruble strengthening to 73.40 is possible. A deeper down passage will require an increase in oil prices. And this is a big question at the moment. Therefore, buying from 73.40 is perceived as a good trading idea now.

Falling scenario: when rising to 76.20, it will be possible to speculate about sales. Shorting from current levels looks premature. 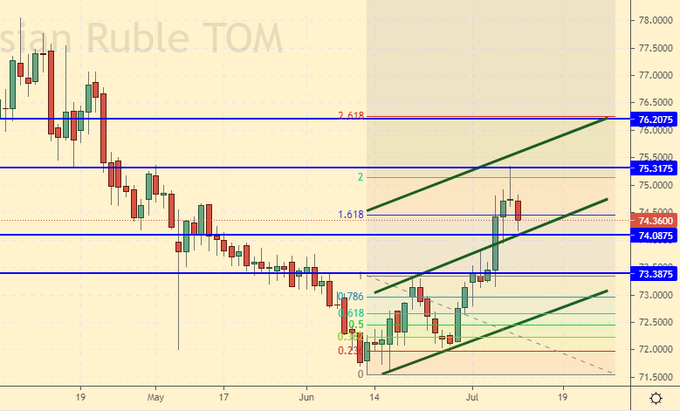 Growth scenario: technical analysis does not deny the possibility of growth at the moment. However, to confirm, we will wait for the rise above 165,000. If oil continues to rise, the index will be able to show new highs.

Fall scenario: we will sell here. The expectation of the RF Central Bank rate hike on the 23rd should bring pessimism to the stock market. Recommendations: 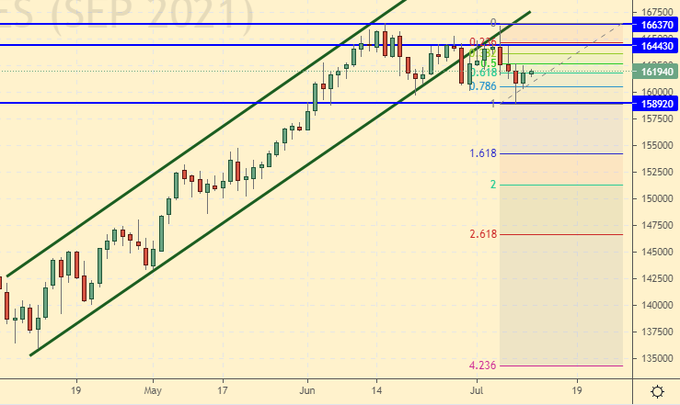