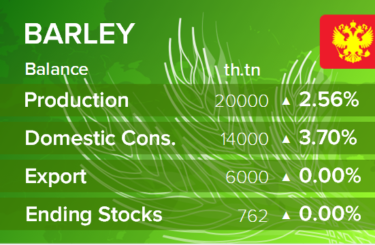 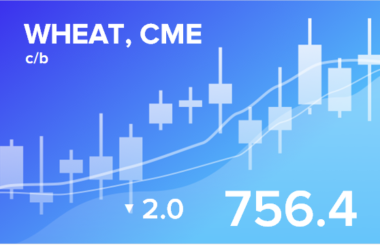 Corn prices remained stable in the early days of the new year, while wheat prices corrected slightly. So far, there are no signs of a downward reversal in the market, and most likely it will not, as fears of a pandemic, global inflation and uncertainty about the new harvest will support quotes until May.

As gas prices remain high in the EU, nitrogen fertilizer production will be extremely expensive, placing a heavy burden on farmers. It should be noted that a program for providing farms with fertilizers has been developed in Russia; it is designed to prevent a shortage of these products on the domestic market.

There is another, indirect, but significant factor in relation to the grain market: greenhouse farming with high prices for gas and electricity in Europe is becoming unprofitable. This will only exacerbate the shortage of vegetable products and lead to another round of price increases.

By reading our predictions, you could have made a wheat futures trade down from 820 to 735 cents per bushel. You could also make money in the sugar market by moving down from 19.80 to 18.21 cents per pound. In addition, you could make money on the dollar / ruble pair by taking a move up from 72.90 to 77.00.

OPEC + will continue to smoothly increase the supply on the oil market in February, expecting to supply the market by 400 thousand barrels of oil more than in January. A number of analysts directly state about a possible shortage of oil by 2025, expecting that demand will significantly exceed supply. The fact is that not all exporters will be able to increase production due to political and economic problems within the countries. Note that Russia is already close to its technical limit and in the coming years is unlikely to be able to show production levels above 12 million barrels per day without large-scale investments in the industry.

Gas prices in Europe remain at $ 1,000 per 1,000 cubic meters. Optimistic estimates are that if the next two months are warm, there will be enough gas until mid-March, and then spring. But even in this situation, the storage facilities will turn out to be empty by the summer, and if there will be only cabbage and nothing else in Brussels’ heads, then the winter of 2023 can be met with prices as high as $ 2,000 per 1,000 cubic meters. People will not understand the next increase in fuel prices; there is no need to look far for examples.

By reading our predictions, you could have made a wheat futures trade down from 820 to 735 cents per bushel. You could also make money in the sugar market by moving down from 19.80 to 18.21 cents per pound. In addition, you could make money on the dollar / ruble pair by taking a move up from 72.90 to 77.00.

Judging by the published minutes of the December meeting, the US Federal Reserve is ready to start raising rates already at the March meeting. This came as a surprise to the market as traders expected a smoother development of events.

However, the number of new jobs outside the agricultural sector in the United States in December turned out to be significantly worse than analysts’ forecast and amounted to only 211 thousand. Such weak data can cool the hotheads of the dollar bulls. With a weak labor market, Powell will ignore inflation and will continue to keep rates at zero.

The ruble came under attack in the early days of 2022 amid problems in Kazakhstan. At the moment, the situation both in Kazakhstan and on the market does not look dramatic, but the national currency will most likely continue to remain under some pressure.

Already on Monday, we are expected to hold talks between Russia and the United States in Geneva, then, on the 12th, Russia-NATO talks are to take place. If the communication between the parties is restless and in places deranged, then we will see another wave of sales from the beginning of this year in the dollar / ruble pair, despite high oil prices.

Growth scenario: March futures, the expiration date is March 14. We wanted to rollback to 730.0, and we got it. Here you can buy with the target at 894.0.

Falling scenario: while the market is below 730.0 is not visible. We do not sell. 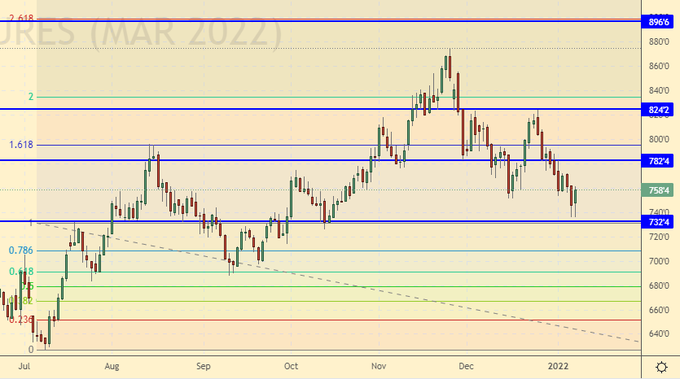 Growth scenario: March futures, the expiration date is March 14. If the market goes above 618.0, we will buy.

Falling scenario: not bad levels for selling. If Monday is red, go short. 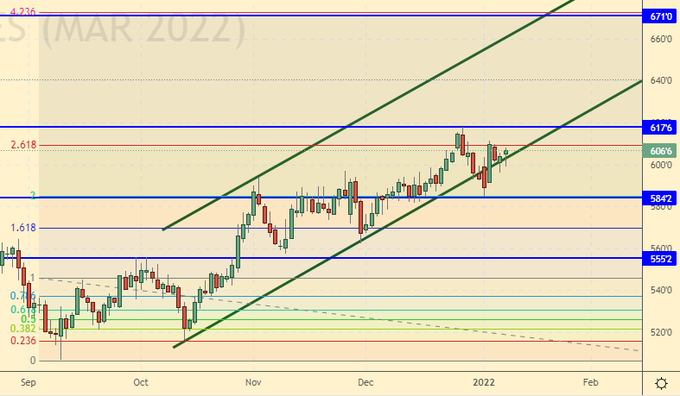 Growth scenario: March futures, the expiration date is March 14. We continue to hold longs. The 1470 mark is likely to be reached.

Falling scenario: while out of the market. We will sell from 1470. 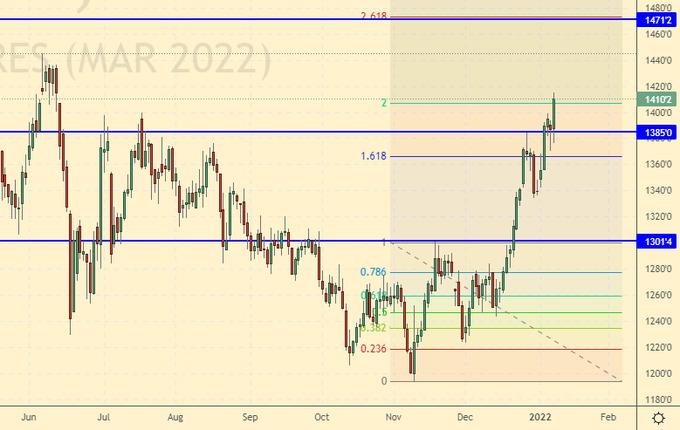 Growth scenario: March futures, the expiration date is February 28. We consider purchases from 17.50 as optimal.

Falling scenario: our goal at 18.21 is fulfilled. Out of the market now. 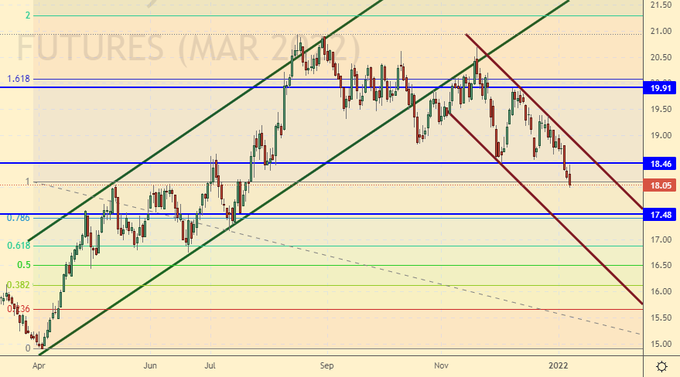 Growth scenario: March futures, the expiration date is March 21. For purchases, we need to drop to the area of 200.0. Out of the market so far.

Falling scenario: keep short positions. We are waiting for the move to 200.0. 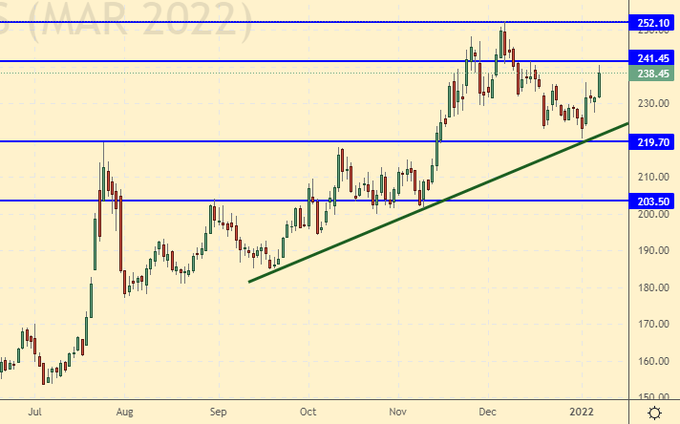 Growth scenario: January futures, the expiration date is January 31. Purchasing without a rollback is extremely uncomfortable. If the market does not fall and rises above 85.00, we will think about entering a long.

Falling scenario: we will sell on condition that Monday is red. Note that if sellers allow prices to rise above 83.30, this will attract a large number of buyers to the market. 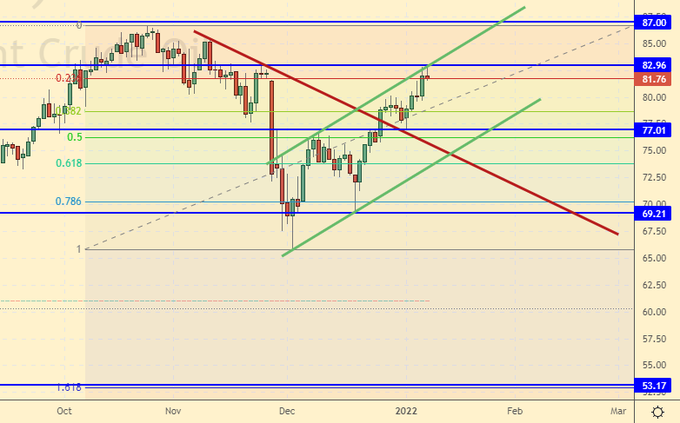 Fundamental US data: the number of active drilling rigs increased by 1 unit and is 481 units.

Growth scenario: February futures, the expiration date is January 20. The bulls failed to lift the market above the 80.00 level. We are counting on a pullback, we do not buy.

Falling scenario: sell if the market stays below 80.00 on Monday. 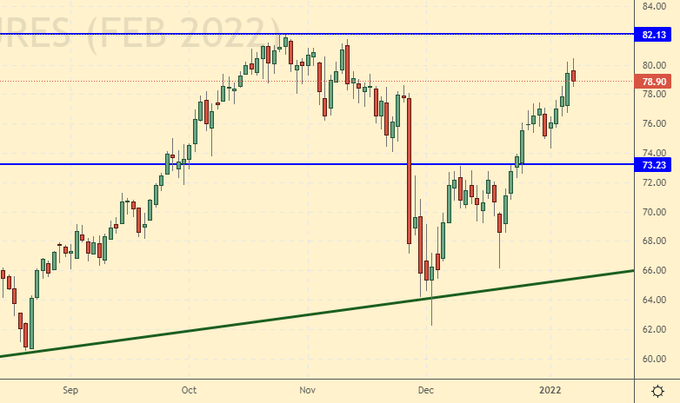 Growth scenario: February futures, the expiration date is February 10. Quotes are high. We do not buy. Fall scenario: sell here. The odds are slim, so consider the risks. 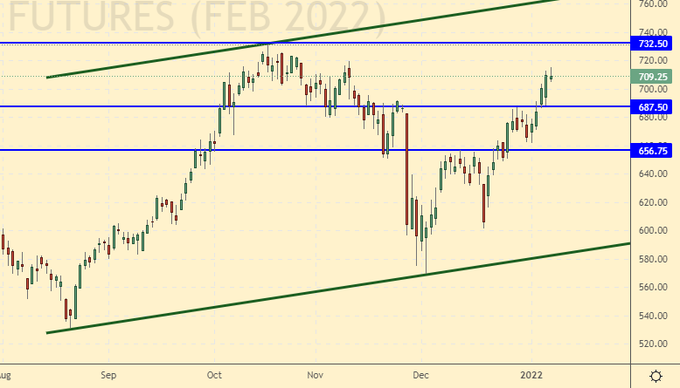 Falling scenario: do not sell. Two more months of winter, and it is not a fact that it will be warm. Recommendation: 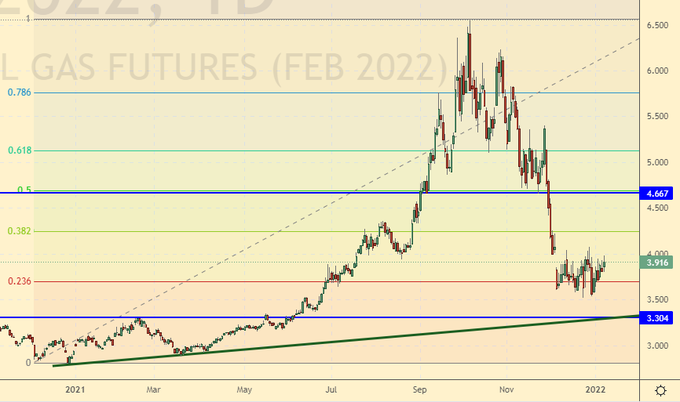 Growth scenario: the bulls’ advantage is minimal, but it is there. We keep longs.

Falling scenario: gold short will be possible after falling below 1770.

Sale: thinking after falling below 1770. 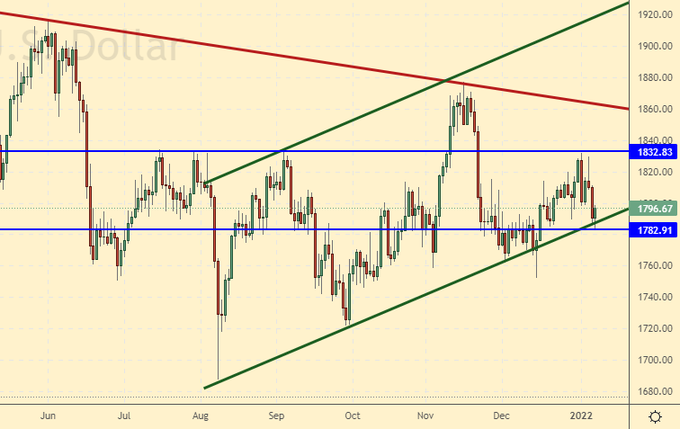 Growth scenario: we continue to wait for the market at 1.1070. We must go to this mark by March.

Falling scenario: here you can enter short with a short stop order and a target at 1.1070. 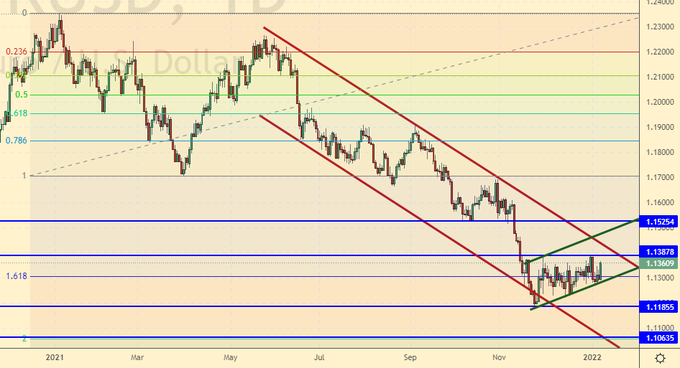 Growth scenario: while the market is above 74.00, it makes sense to continue buying. Note that our target at 77.00 was reached.

Falling scenario: for the pair to sell, a strong positive is needed, primarily in the international arena. Next week there will be a series of negotiations that may affect the foreign policy situation. Recommendations: 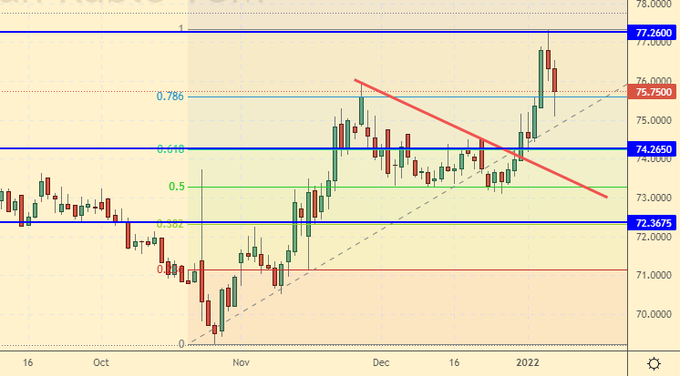 Growth scenario: only after growth above 166,000 will we buy. Until this moment, we remain outside the market.

Falling scenario: if the situation along the Russia-NATO line remains gloomy, we will not grow. We cannot exclude a move to 105000 with increasing problems. However, while the oil is around 80.00 all the shouts from over the hill will not be taken seriously. 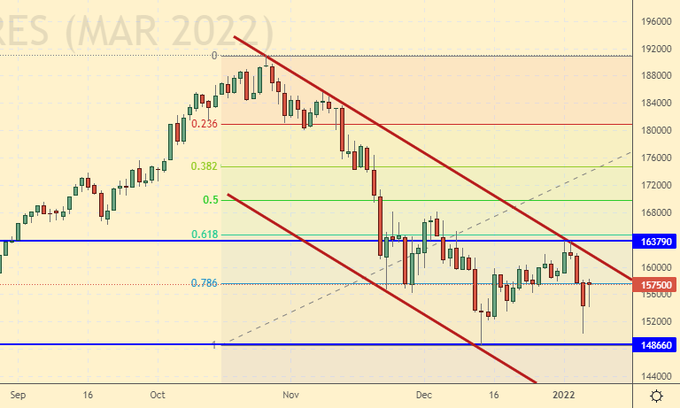